Source: Bought with my own cashmoneys
Price: £4.79
Where To Get It: Steam Page, Owl Cave Games Homepage 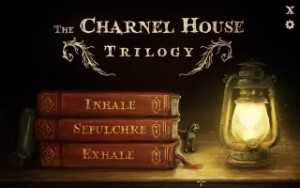 Most of the shots are from Sepulchre, the middle episode.

The Charnel House trilogy feels unfinished. There, I’ve said it. It feels a little forced, and unfinished. Because, in a sense, it is forced and unfinished. It’s unfinished because it’s not really a trilogy, there’s a fourth episode coming sometime in 2016. There are also reasons for it feeling forced, and, if you’ll forgive the pre-emptive pun, railroady. But that doesn’t mean I’m overly fond of these things.

So let’s briefly summarise what it is, and take a look at why I don’t get on with The Charnel House Trilogy, and why you might or might not like it. Briefly, it’s the stories of two folks, Dr. Harold Lang (Archaeologist, and curator at the Krenwick-on-Thames museum), and Alex, a late twenty-something, slightly gothy librarian who also has an interest in the past. Both are catching a train (and then, although we don’t see it, a boat) to Augur Peak Island, past home of horror author Louis Cassell. Things Are Afoot. Emphasis on Things. It’s a point and click episodic horror adventure, and it takes between 1 and 2 hours to run through once. Now… 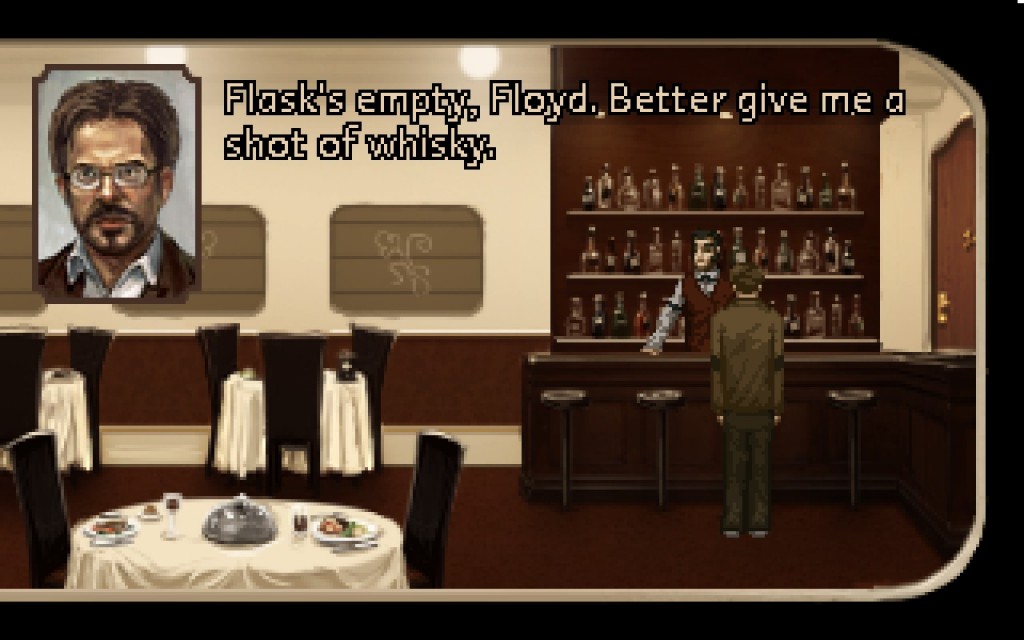 You’ll have to take care of your wife, Dr. La- Wait, I get this sense of Deja Vu!

The game is chock full of references, and… Although I was entertained by spotting said references, they felt “for the sake of reference”, rather than their own entity. The bar scene from The Shining. The painting that seems to be a nod to The Haunting/The Fog (EDIT: It’s not, but that makes it slightly eerie. ;D ) The jokey puzzle “solution” that references It (The Stephen King novel, not The Haunting or The Fog again)… There’s even a few references to ongoing things, like the 6-10 review scale and the drama that often accompanies it (That last one, to be fair, feels more natural, and, as a reviewer who hates “pretty numbers”, I liked it.)

There is an explanation for it, although it’s not an immensely satisfying one. But it does lead onto the second point. 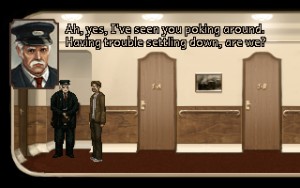 I love your voice, Don, but we’ve got to keep meeting like this. People will talk!

I get it, the games are short, and there’s a reason for that behind at least two of the episodes (I don’t want to spoil it, in case you try the game for yourself), but the only episode where the flow and pacing felt natural was the first. The second had some very jarring and railroady “Go here, now here, see this thing, go back, see this thing, go back” for the majority of the episode, and the third… I felt hammered by the plot beats, racing one after another toward my gut, and, unfortunately, for me, it wasn’t the “pleasant” bam, revelation, bam, epiphany, bam, ohfuck, but more a discordant BAMSTUFFBAMSTUFFBAMSTUFF!

As much as I hate to say it, because I know (oh dear lord, I know) that this isn’t always possible, it could have done, in my opinion, with being longer, a little more restrained. As it is, even knowing roughly what’s going on, I felt disoriented, and not, I think, in the way the author was intending.

It’s not all bad, however. The voice acting is mostly interesting, and I do want to know more about the characters put forward so far (Well, the main characters, and “Grub”) Jim Sterling plays his role surprisingly earnestly (Worryingly so, in fact. Don’t worry, Jim, I know it’s a role!), and he put little touches in that… Well, did for me what the pacing didn’t. Peter Willington and Madeline Leroux play their roles well, and their characters (Dr. and Alex, both with interests in archaeology and history of one form or another) take the time they have with both hands, with only a few minor fumbles. Also, visually, it’s very appealing, with a similar style to the later Blackwell games, or late Sierra point and clicks, and the tunes are mostly quite good (The bar theme gets on my nerves though)

In summary, while it has its high points, it’s just not for me so far. However, two things must be noted. Firstly, it’s £5 for the trilogy so far, it’s setting something up, and so it’s really not much of a gamble to try it out for yourself. Secondly, I am notoriously picky when it comes to my horror, and pacing problems irritate me more than pretty much any other aspect of a game. There’s also, as I mentioned, the fact that there is going to be a fourth episode, that, despite my bitching and moaning, there’s definitely interesting unanswered questions (Er, what’s up with the bags, folks?) ,and the pre/post credits teaser sets up what may turn out to be something interesting (Considering Owl Cave also created Richard and Alice, which is an interesting game that’s worth a look-see too.)

In summary, it’s a love it or hate it experience. I didn’t get on with it so well, but if you like short point and click adventures, this might be up your alley. Be warned though, the big reveal might need a trigger warning, although, with horror, I really shouldn’t need to say that… 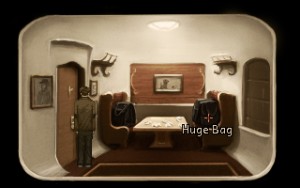 THE BAGS… THE BAGS OF MADNESS!!!

The Charnel House Trilogy was released on April 16th, 2015. I have been seeing a shadowy figure in my dreams since this review was first written. They are carrying Huge Bags.