Source: Bought with my own cashmoneys
Price: £9.99
Where To Get It: Steam Page, Desura, Company Site 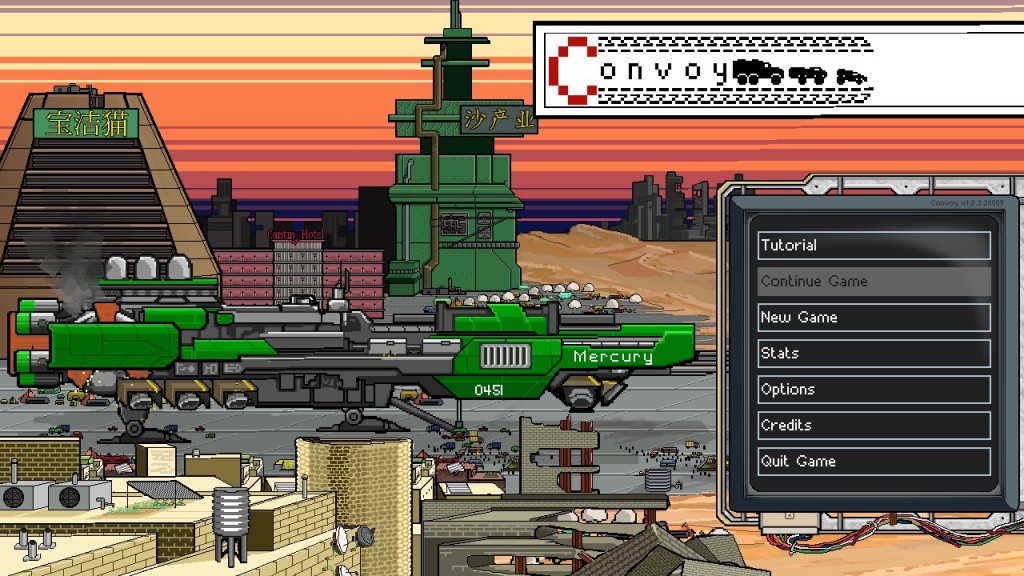 Log – Discovered near burnt fragments of Convoy #1 by Convoy #2.

Convoy Leader’s Log, Who Damn Knows: I have picked up a new ally on this war torn world. He calls himself Friendly Fire, because he claims he has a bad habit of destroying his allies by accident. I refuse to believe a man can be so unlucky.

Convoy has been described as Mad Max meets FTL, and, in a sense, it’s quite right. It’s a procedural action strategy title where you’re trying to obtain four replacement spaceship parts on a largely inhospitable world. The world is split between three factions (The TORVAK corporation, Raiders, and the Privateers) and all three factions, for various reasons, are likely to try and destroy your convoy along the road. Don’t give them the satisfaction.

The game controls fairly simply, almost entirely with clicks of the mouse, and it looks similar in terms of visual style to FTL (So, it looks spritey, and pretty good overall). The music is interesting, but… It definitely has some minor problems at release. For example, a thing that appears to be happening quite often is items sticking to the shop screen, along with a touch of slowdown every now and again… Not pictured: All the DEATH waiting.

But enough about visual bugs, which I’m sure will be fixed, let’s talk about the game itself. Difficulty wise, the main elements are to do with your need for fuel, and the trials and tribulations of combat. Combat is a case of moving your escort vehicles around, targeting enemies as you go, and sometimes (only sometimes), forcing your opponents to ram into one of the obstacles of your running battles, such as pylons, sudden outcroppings, random wreckages, and, in some rare cases, canyons and buildings. Of course, there’s more to it than that, as your MCV, while immobile, has special abilities. The absolute beginning one, for example, is an EMP cannon. Fires once every reload, stuns opponents, destroys shields, and is bloody useful for the aforementioned enemy crashings and burnings.

Your first fights are rarely overly tough, but they do grind your health and armour down, and you’ll need to be pretty savvy. Within the first ten minutes of my second game, I had already spent most of my money on my first gun, and was down to around half the fuel I’d started with. Seeing as fuel can only be replenished by events that reward you with fuel, or by buying it from camps using the game’s scrap currency, it’s always a bit of a worry. No, fights don’t always reward you with fuel. One of the more horrifying events of the game actually comes from fuel loss, where you have a bleak choice. Wait for someone to help… Or render some of your crew down for biofuels. I went for that choice, and I still feel like a monster for doing so. 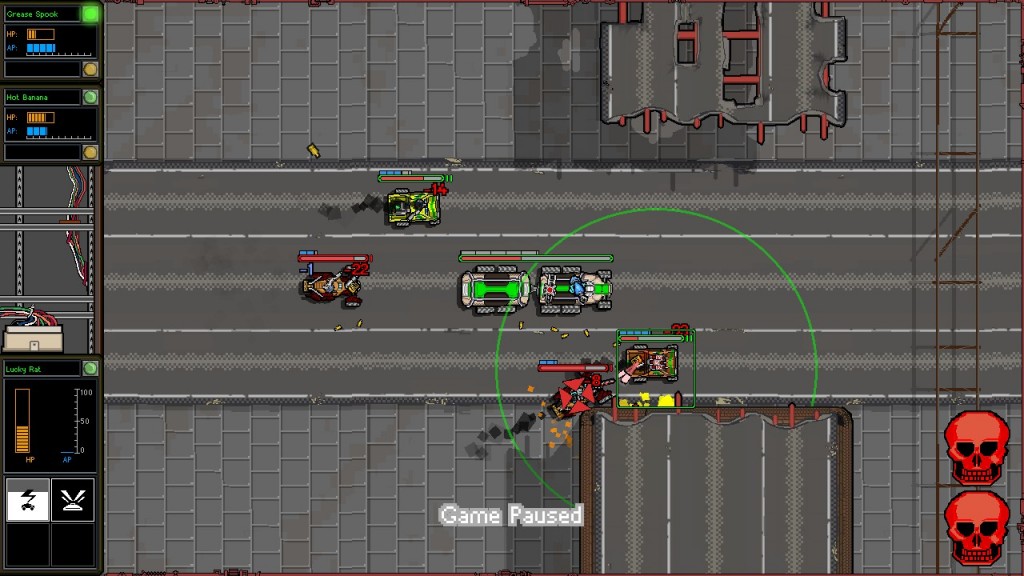 Ooooh, so *close*! I could have saved me a lot of time there!

Still, fuel isn’t an insurmountable problem, and soon enough, you’re riding high, with a full convoy. You beat the somewhat difficult final boss, and… You’ve maybe unlocked a vehicle or two. Orrrr… You’re nearly out of fuel and scrap, your escorts are all destroyed, and all that’s really left is hoping you’re going to luck into enough scrap for a vehicle/fuel, and silently wishing the next combat event, at least, is quick (A criticism is that, sadly, it’s not quick very often. I’m staring at my MCV, slowly getting torn to shreds by a single TORVAK raider I can do nothing about… Not. Good.) . In fact, a single game on normal takes somewhere between half an hour (If you’re unlucky) and three hours (For a safe win).

If you’re playing on Normal difficulty or above, it’s usually the latter, the game is somewhat punishing. This isn’t to say that the game is low on replay value, however. There are quite a few events, and there’s a small selection of different sidequests, some of which are somewhat amusing to find. Case in point, the Insult Fighting event, a fond reference to Monkey Island, or, similarly, the Modern Major General reference (both of which I got at the beginning of my third run, giving me a nice comfortable start of an extra vehicle and some cash) 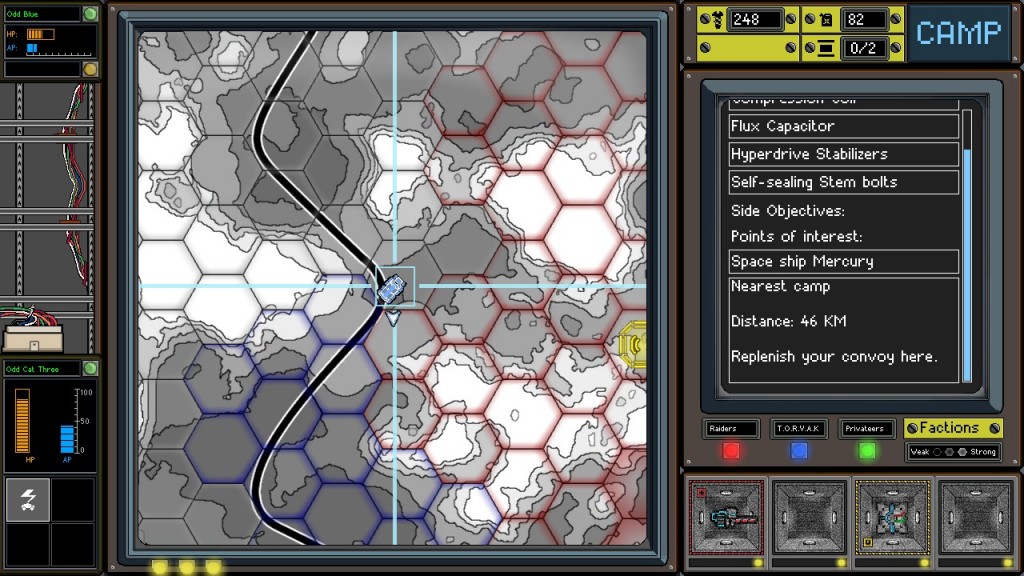 Sure, I had resources, but before I could hit a camp, I lost the escort. It took me ten minutes to die.

There’ve been quite a few runs since then, but my overall opinion is this: If you liked FTL, you’ll be okay with this. It feels a little less balanced, more chance ridden than FTL was, and some of the events are inconsistent in tone (You can shoot pretty much anybody in an event, but it honestly feels like kicking puppies in many of them), whereas the combat is still interesting, and, with a little more polish, it could be good. As is, though, seeing your convoy painfully get disassembled is a frustrating experience. While I would say it’s worth the money, time and enjoyment wise… Play Easy difficulty first, don’t tackle Normal and Hard until you’ve unlocked some better vehicles. And let’s hope they make death a little less lingering.

Convoy, by Convoy Games, released on the 21st of April. The Mercury keeps crashing on Omek Prime, and many men have died due to this temporal horror.