I am, most of the time, a pretty calm person. Suffice to say, this sentence has an unspoken “BUT” , and, certainly enough, Sundered is that “BUT.” This is both a good… And a bad thing.

Congratulations, Thunder Lotus Games. You have discovered the edge, the very edge, of my video-game masochism. 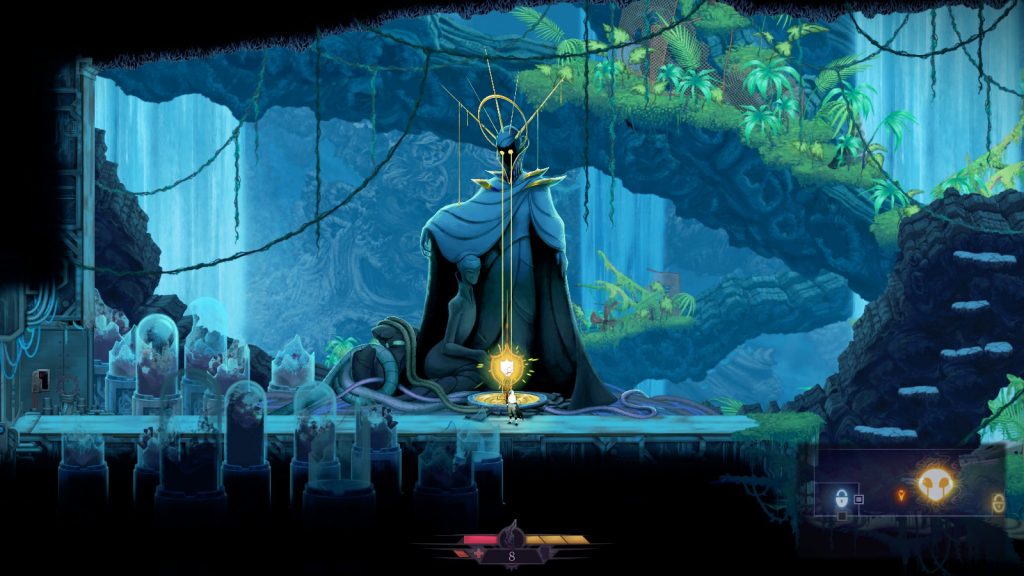 While not a mobility or attack powerup, the shield is bloody useful because… Well, you *live* longer, innit?

In any case, while I’ve been jokingly referring to this as a “Soulscraftroidvania” (This is a joke on my more jargon loving peers in the industry) , it is, once you break down the word, moderately accurate. It has a high difficulty curve that is supposed to get better by dying and levelling up from the fruits of that dying. One of its antagonists (who is also your weapon) is the Shining Trapezohedron, and Lovecraft references abound… I would like to add, at this point, that making the main character a woman of colour is both a nice step representation wise, and a nice subversion of Lovecraft’s work, which often had folks of colour as the villains (Sigh.) And, like Metroid and Castlevania, progression depends on getting powerups, not all of which are mobility based, but all of which unlock some kind of skill gate or another. Explore three areas, murder enemies and bosses, get cash, die, repeat, hopefully making some progress. Equally, another core mechanic is that you can, with the Elder Shards dropped by boss and miniboss alike, either empower your abilities, changing them, or get more basic shards with which to improve your skillls.

That’s the absolute basics. Let’s get the good out of the way. Aesthetically, it’s beautiful. Thunder Lotus have a clean, consistent style, they know their UX, they know their animation, and they know their music. The sounds are mostly good, even if one in particular has associations with the mixed bit. The powerups are interesting, and some have some very interesting factors that make them extremely multifaceted. 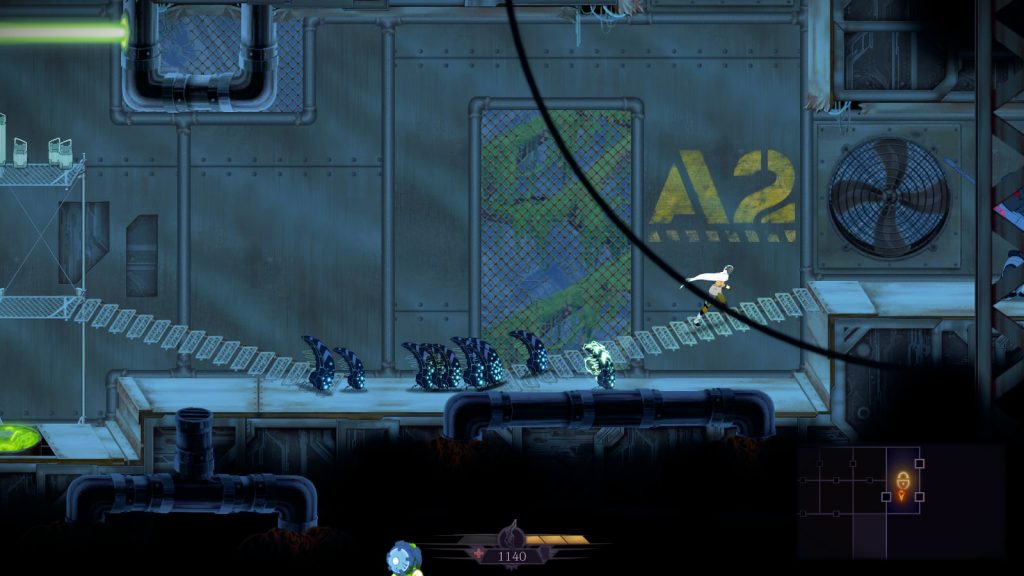 The best example of this is the Cannon. On the one hand, it fires a massive bolt that does at least three times the damage of your best melee strikes, and pierces walls, enemies, and the pots, crates, and gooey blobs you shatter to maybe get money. On the other, it’s slow to fire, takes both a unit of ammunition and stamina (Only one of which regenerates. The other must be found), only fires straight forward, and hurtles you backwards (Funnily enough, that makes it a mobility tool too.) On the third hand, it’s the only way of opening certain locks that exist… In the first area of the game. That is good design.

Similarly, the writing is pretty good. The Shining Trapezohedron is a weapon, an antagonist, and an unreliable narrator. It wants you to kill. It wants you to be better at killing. It hates you when you don’t take this option, and I’m almost certain it’s lying to you.

Now let’s get to the bad bit. Funnily enough, just like the Cannon is a core gameplay element, so is the part that I’m extremely unfond of: Enemies. Not specifically the fact that there are enemies, or the fact that they’re tough (Although some are extremely tough, serving as their own damn skill gates, and some, like the Aberration or… Well, nearly anything with ranged weapons, honestly, are just bloody annoying.) It is, like the Cannon, a multifaceted problem.

They are not in set positions, but rather, come in waves of increasing brutality, each wave being made of “native” enemies (For example, Cultists, Crawlers, and Screamers in one area.) Sometimes, they will be megawaves (signalled by a gong or a klaxon, depending where you are.) The ranged opponents can attack from offscreen… A long way offscreen. This gets worse later on, when some of the enemies get homing bullets. And, due to another facet of the game (Its tendency to zoom out to show you pretty or big things) combined with the number of enemies that can appear on screen at one time, the fact the ranged enemies often force you to hunt them down (While sometimes limiting your mobility) by virtue of firing from way offscreen (Hunters are the earliest offenders here, but not the worst), and, of course, the Endless Horde rooms you have to race through to get perks you will most likely need before the endgame (and, if you’re a completionist, definitely want)… Well, it makes what are meant to be big, epic fights sometimes confusing, often frustrating, and, overall, makes it feel more like difficulty padding than merely challenging. The limited pseudo-random generation of areas (The basic layout remains the same, but the specific paths within those areas varies from game to game, and indeed death to death) is an interesting idea, but also, at times, leads to frustration as a longer way out dicks me out of just a tadge more progress by… Well, having to deal with more waves. 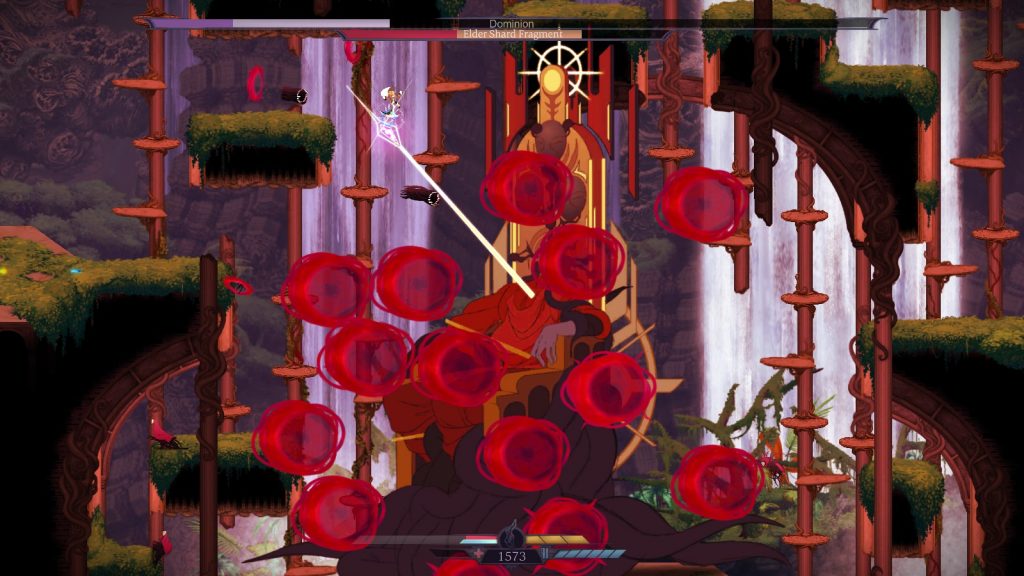 Pictured: A nice game of “spot the protagonist in the middle of a bossfight.” Not pictured: The 50 or so assholes he was going to summon.

Similarly, your mileage may vary with the bosses. Quite widely. All of them are at least moderately pattern based, and relatively easy to understand, but some are exercises in frustration and pain. Funnily enough, all three of the examples I can think of off the top of my head are variations of ranged enemies, based on the Cultist (Creates walls of tentacles and explosions), the Screamers (Tries to keep out of your range, shoots you), and the Aberration (Often keeps out of your range by grappling from wall to wall, fires bullets with moderate homing.) The Aberration boss, in particular, has driven me almost to tears, and, at the time of writing, still hasn’t been beaten.

And this is a damn shame, because, while I normally would only not recommend this game to those who, for one reason or another, don’t like or aren’t able to play twitchy games (Being an action combat platformer, it’s very twitchy, and button mashy a fair bit too), I also can’t recommend this game to those with anger-management problems, because keyboards, mice, controllers and monitors are expensive, and I have no desire to be responsible for the destruction of said items in a frustrated rage that I freely admit I’ve come close to at times with this game. Not for novice players, it definitely has its good points, but the experiment of not having basic enemy placement is one that, unfortunately, I’m not fond of.