I’m going to get this out the way right now, so as to weed out those reading this: Shrouded Isle is mechanically very simple. For three years (12 seasons), you, the high priest(ess?) of a lovecraftian cult, must keep the noble houses that support you happy, while encouraging “Virtues” like Ignorance and Penitence, and also sacrificing one of your advisors each year. Apart from a few somewhat spoilery details, that’s yer lot. 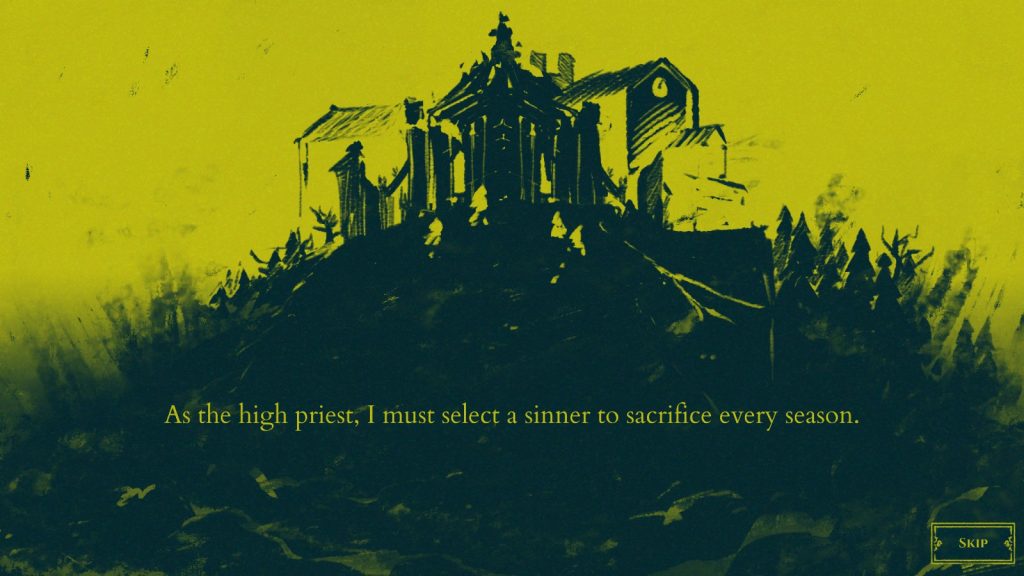 Find a sinner, kill ’em dead. Got it… But… Who’s a sinner again?

Now let’s get into why the game is still interesting, and not a little disturbing. Let’s talk about evil. Evil is not a single entity, no matter how much we sometimes wish it would be. Nor, funnily enough, is Good. They’re values, not people. Even within a group, there is difference. Even within a group that seems unified, there is dissonance, sometimes prejudice. Shrouded Isle, despite its fantastic setting, does a good job of putting this into play, synergising mechanics with its world.

Ivan Efferson is a Flirt. He’s bad for discipline. Problem is, I know from watching the Virtue levels that he inspires even more Obedience than usual. It’s a sin, it’s true, but forgivable considering his good work for his house. The family would be angered if I sacrificed him, and, honestly, so would I. A good advisor makes a bad sacrifice.

His daughter Fania, on the other hand, I recently discovered was exactly what I was looking for. My Lord had told me to seek a Swindler, and lo and behold, there she was. A prime sinner. She’s not even very virtuous (Although I have yet to determine what her virtue is.) But there’s another factor: If I let her advise, I will have to use her skills, because I’ve already sacrificed one of Ivan’s daughters, and I’ll need to counter the sheer outrage from the bias in selecting from the same family twice. I could wait a year, but she’s sabotaging me behind the scenes. 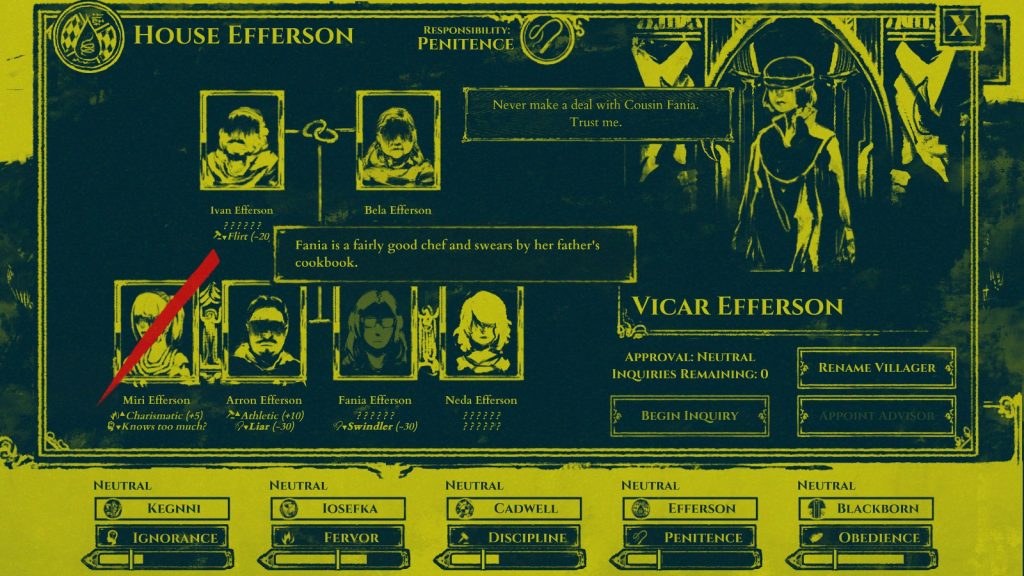 To win, I have to manipulate. I have to put useless people in positions of power both to maintain the status quo, and to ensure my relationship with this advisor’s family remains cosy. They may all be sheep, to be fed to my Lord once he Awakens, but even sheep can, in panic, turn on me. They may not even do it for reasons “Good” people would consider “Good.” There’s another person who’s undermining my perfect… Controlled… Society. And they’re doing it because they’re a massive pervert, blaspheming even before my eyes.

Is any of this starting to sound familiar? Because it sure as hell does to me. Like many, I’ve seen it played out, the scapegoat thrown to the wolves, the inner conflicts that can rend a group apart, the search for purity. As such, it blackly amuses me to note that victory not only involves invasion of privacy and deception, it involves satisfying overall goals while… Keeping little bars of Virtue between two poles. Poles that shift as the Lord demands focus on a virtue.

Of course, it also adds nuance. Chernobog may consider Ignorance a virtue… But Liars and Swindlers alike are just as high on his list as the secret Librarians and Kind folk. The soundwork is subtle and unnerving, and, while the colour schemes at first seem unsubtle as all hell, they’re picked for their high contrast, although recently a more muted grey (Cremation Ash) is available in the options. I’m thankful for that, as, while I appreciate that the original colour scheme is picked for its subtly nauseating effect, it’s not something I want to play for long. 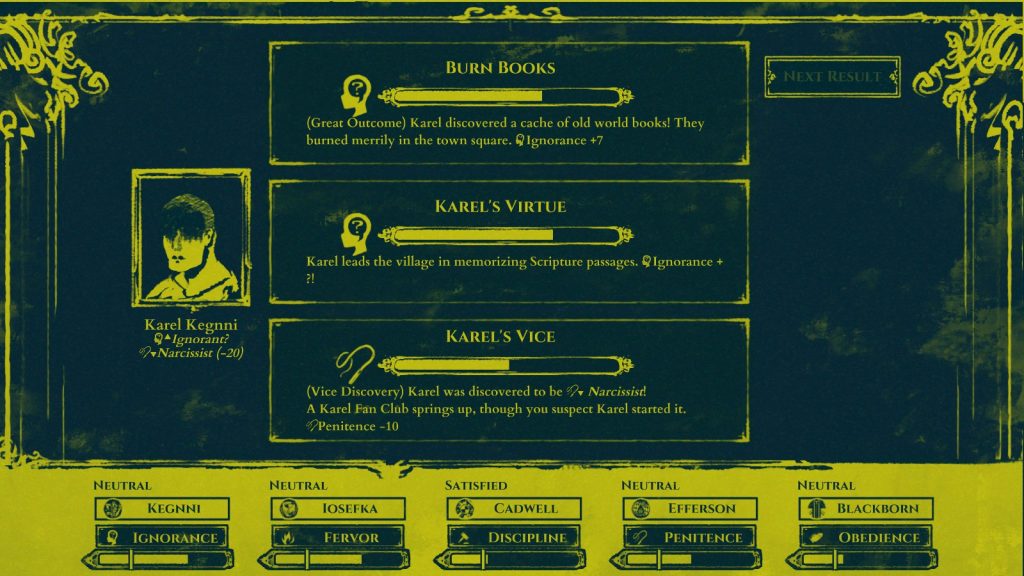 …Listen, buddy… There’s only *one* narcissist allowed in this cult, and that’s ME.

I kind of like Shrouded Isle. It’s taken around 2 hours, 2 games, to get to the win, but the game has multiple bad ends based on which “Virtue” was found lacking, and I find myself curious. I also wouldn’t mind replaying, as the game randomises virtues and sins, and it’s simple enough that I can see myself coming back. The game is pretty accessible, it does what it says on the tin quite well, so my main “not recommended for” group would be folks who are not up for a game in which you are definitely bad folks sacrificing your fellow human beings to summon an elder god.