Subnautica is a game that takes a while to get going, and then GIANT SQUID happen. It’s also a game that takes a little while to learn. While Starbound does strange new worlds, and games like State of Decay do the zombie survival thing, Subnautica does Blue Planet. Ocean everywhere. And it does a good job of dissuading you of the idea this would be boring… But some things do require a little bit to learn. Thankfully, with the exception of Creative Mode, you get to enjoy the story in the manner you want, with a choice of Permadeath and Everything on, and varieties of Not-Permadeath with or without the need for food and water. 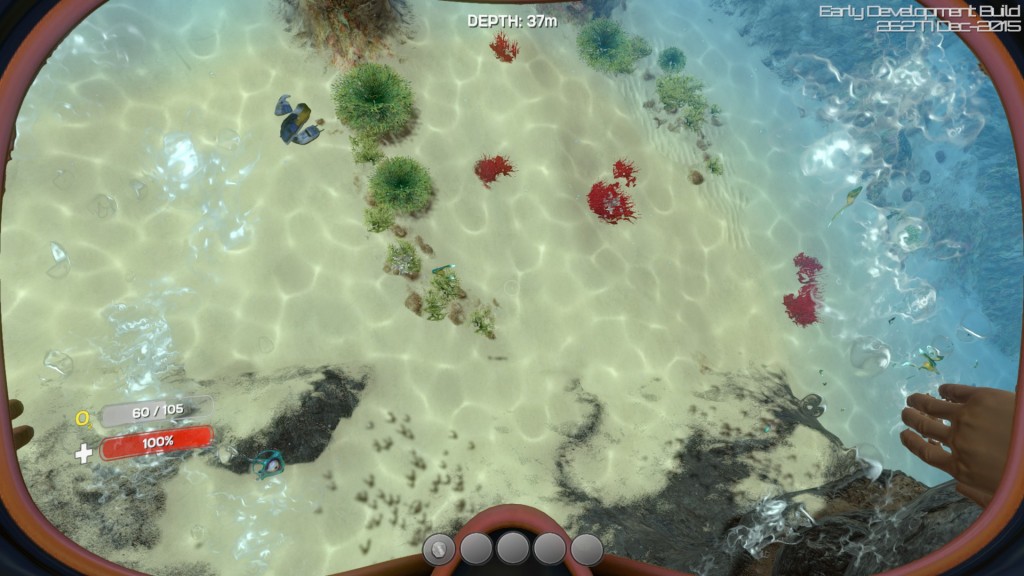 Being underwater may seem confusing in screenshots, but feels natural in game… Also beautiful.

Funnily enough, the base Survival mode (No permadeath, but you need to obtain food and water) is the right mode for me, it seems. Because fish are assholes, and once the world opened up to me? Wow, did I suddenly feel very small… In the best way. So let’s talk progression, to give you some idea of why I like this game.

It begins with an escape pod. Yours. Your ship, a coloniser, got shot down over an ocean planet, by strange energy beams. You’re the only survivor, and you can hold your breath for 45 seconds. You’re slightly hungry, slightly thirsty, and rather irritable. So you explore this salty “paradise”, and grudgingly admit that yes, it does look beautiful. Kelp forests, caves, underwater gardens of red weed, and… Thank fuck, the fish are actually edible. One of them, the Airsack, even filters water for you if you run it through your Fabricator. Okay, that’s one worry gone. Now for building a home, because it looks like you’re going to be here a while. Titanium and Copper, it seems, can be found in limestone nodules that are thankfully easy to break apart, and the wreckage of the Aurora, your ex-ship (Which is making some worrying noises, and will explode soon, kicking off the story.) But you can’t find any silver, which you’re told is useful for all sorts of electronics, vehicles, and Lead, for a radiation proof suit (Important, because large areas are irradiated now.) 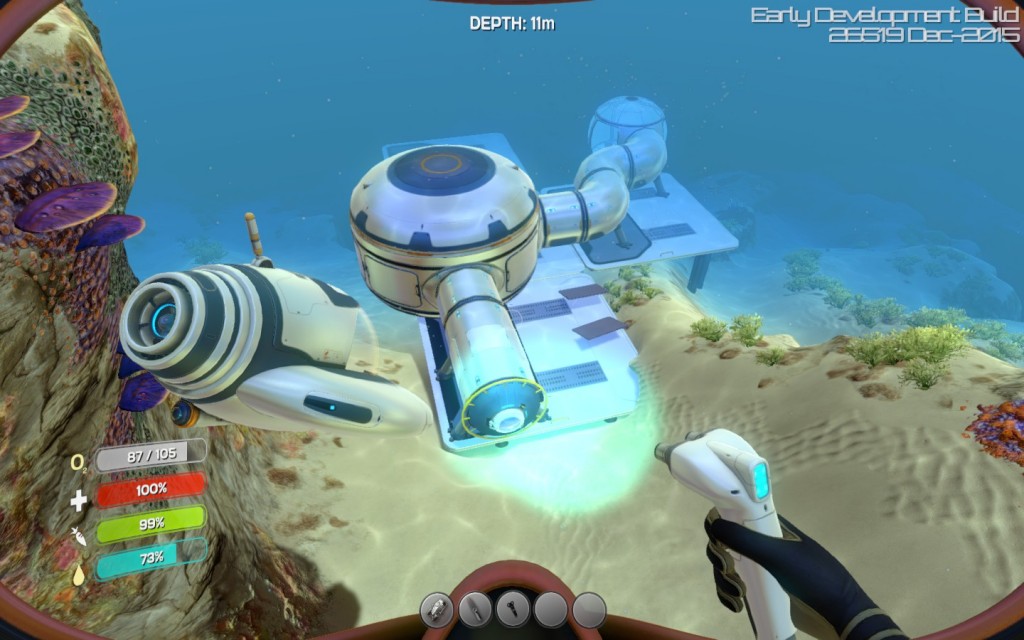 Once you get past the hump, you too can make a home away from home!

It takes you a while to realise that there are two kinds of nodule in the Kelp forests, and you have to brave Stalkers (Asshole Fish #1) to get that Sandstone, which gives you silver and gold. Luckily, building a base mostly takes Titanium and Glass, and you don’t have to build very much to make it a home away from home: Couple of solar panels (Titanium and Quartz), rooms and foundations (Titanium), maybe an observatory (Stalker Teeth and Quartz to make Enamelled Glass), and some lockers and a fabricator (Mostly titanium, some glass). Along the way, you will probably have discovered Asshole Fishes #2 and #3 (A large, carnivorous burrower and EXPLODER FISH.) But food and water are still largely not a problem. You can even completely leave the escape pod behind if you want.

But until you realise where the silver is, you aren’t getting to the really interesting stuff. And that can be a pain, some games. But once you do? Oh boy. Both the kit and the world get bigger. The Aurora is explorable. You build personal mini-subs, and probably get them blown up exploring cave networks. Jellyfish that hang out in cave networks. Massive blue and green glowing creatures that seem harmless… And Gigantic, toothy beasts. Oh god, the Gigantic… Toothy… “Squid”. Subnautica is one of the few games that can claim to have caused an underwear replacement, and my first encounter with this beastie is exactly why…

…Picture the scene. I’m trundling home in a somewhat damaged minisub (The Seamoth), and I keep hearing… Noises. Big noises. It’s dark, even for the depths I’m at, and something is on the edge of my limited vision. There are bumps. Big ones. My console starts sparking. I turn around… 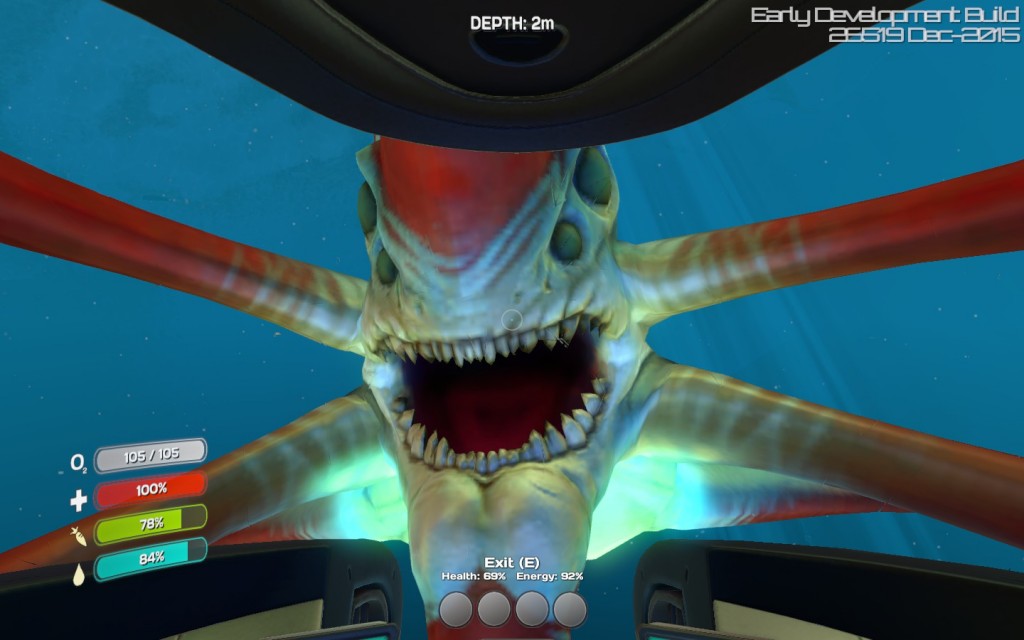 …Faced with so many teeth, I take the option of leaving my Seamoth just in time. Seemingly satisfied, the creature (Many times bigger than I am) slinks back into the darkness, leaving me to try and make my way home the slow way.

So yeah… Although the ocean in Subnautica is beautiful, and it seems, at first, like a slow game with little combat… The ocean is also deadly… It just takes a little while to make you realise that. It’s a survival game which could do with a little more help for the player, but lets you mostly play at your own pace, and I’m definitely looking forward to when it becomes a release candidate. As it is, it’s worth checking out if you like the genre or the ocean… Just be aware… The Squid Is Out There, and It Is Always Angry. 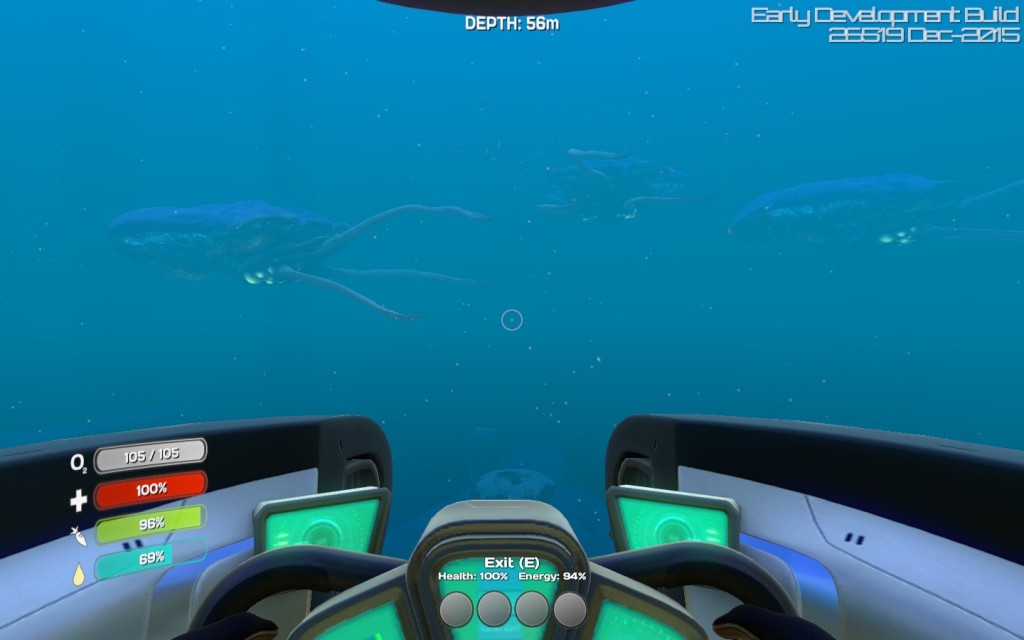 Not everything that’s big is lethal. Maybe. The jury’s out.

The Mad Welshman loves the ocean. He loves some of the… Things that dwell in it a little less.