Subnautica is life’s way of saying “It’s okay that Endless Ocean doesn’t have a PC port.” Even down to the occasional punctuation of chill undersea times with pants wetting terror. 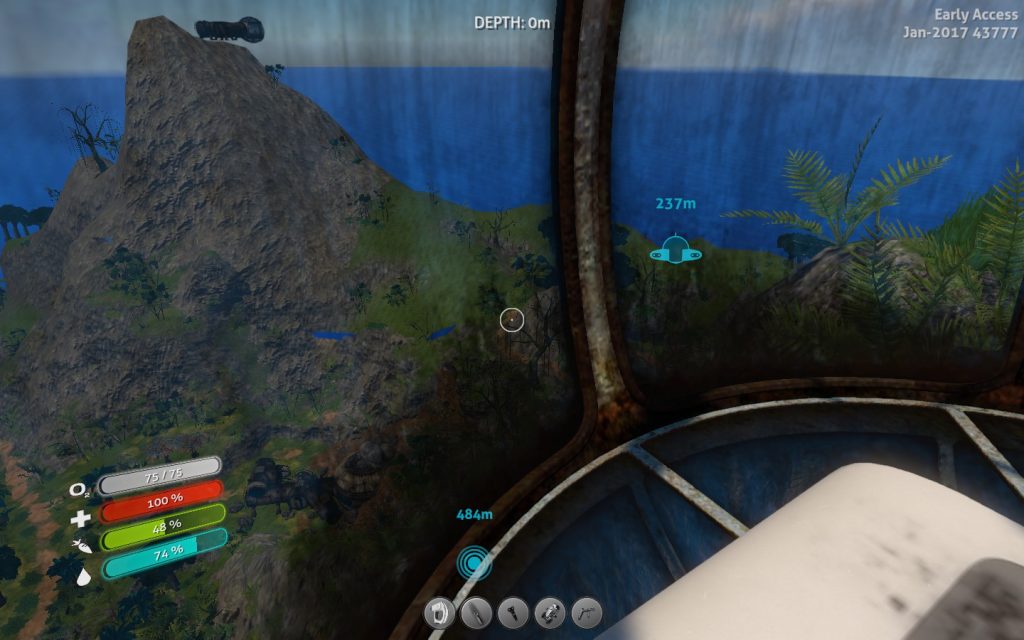 How… How long was I out?

So, it is the far future. Utopia has been achieved, and nice, not animal-killing humans have spread to the stars, exploring and spreading the word of peace and love. Except where you happen to be, because your ship got exploded in orbit around a watery world, and to survive, you will have to… shudder… Eat fish. Also survive, explore the world, and perhaps find out what happened, both to the Aurora and your fellow crewmates who at least managed to escape the ship. 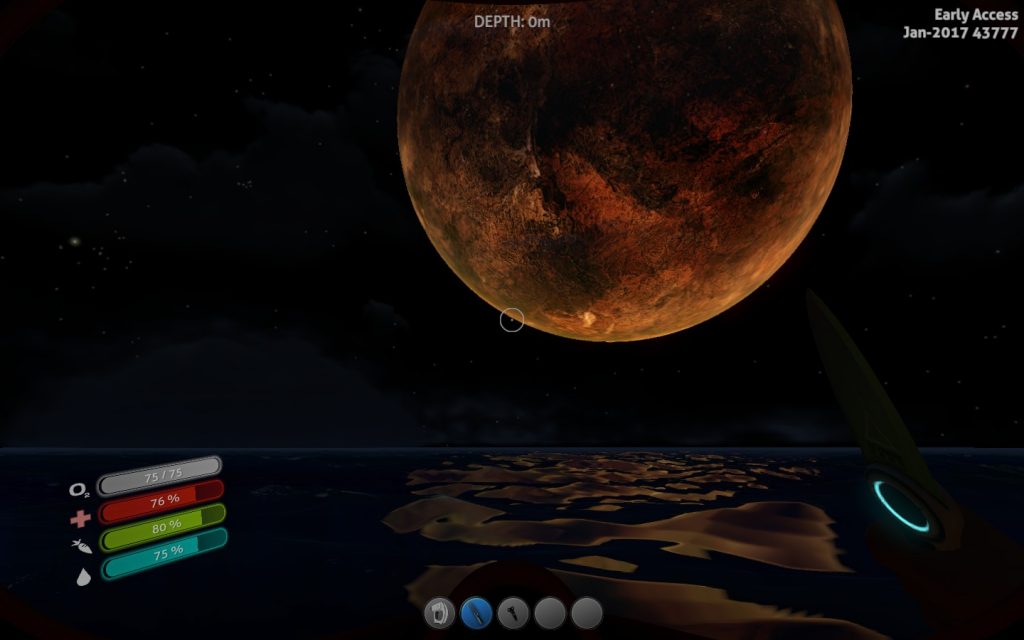 The first thing you’ll notice, once you begin the game, is how beautiful this alien world is. Schools of fish swim, with many different kinds, plant life abounds, and even the moon is lovingly rendered. It’s also a relaxing experience, swimming, collecting resources, and slowly, but surely, learning more of the world around you.

But then the game enters its second phase, and things become… A little more fraught. For all that this world is a beautiful one, it’s also a dangerous one, and, beyond a survival knife, the protagonist comes from a pacifist society that doesn’t really do weapons. And so, you will find things that want to kill you, and your best policy… Is avoidance. Permadeath, thankfully, is not part of this game unless you wish it to be, so being eaten by one of the more dangerous residents, or running out of oxygen, merely results in being plonked back at the nearest base you’ve built, without the things you collected since you last left (But, crucially, the blueprints you gather will still be gathered, so you can still, in a sense, progress… A nice touch!) 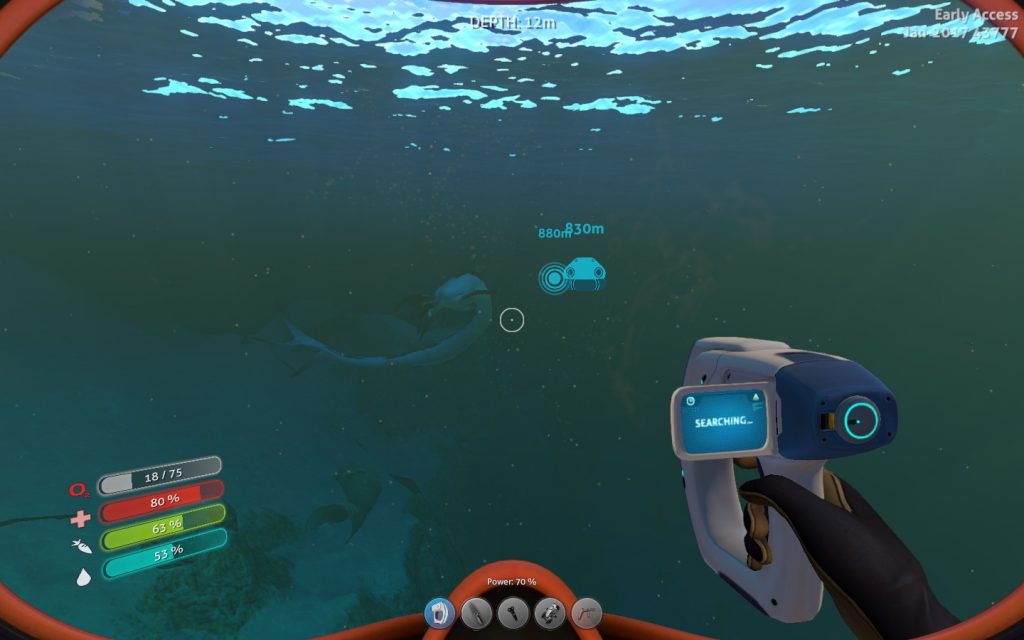 The Reaper Leviathan, as seen from a *relatively* safe distance. Loss count on the current save to this … Thing? 3 deaths and a SeaMoth.

I won’t pretend, however, that this isn’t annoying at times. In my current save, for example, one of the most dangerous creatures of the ocean, the Reaper Leviathan, is plonked right next to one of the richer seams of materials and blueprints, the crashed ship Aurora, and every visit so far has resulted in either death, or the very expensive loss of a minisub (the SeaMoth), and then death. But, fair traveller, this is a temporary phase, and there are other places, other ways to gain the materials you need to improve, and make this world a little safer. You can build bases, waypoints in the deep, and travel between them. You can grow fish, or farm plants, once you find the means to do so. You can create current generators, devices that can very forcefully push the more dangerous fish away from your home of choice. And when you spread your wings, able to explore in relative safety?

Crystalline forests. A strange island, seemingly the only landmass in sight. Mushroom trees, stretching almost to the surface. Swimming among the reefbacks. It’s not often I say a sandbox survival game is a beautiful, calming experience, but once you get over a few resource humps, that’s exactly what Subnautica becomes. And always, always, the mystery of the planet… Awaits. For in one of the most recent updates, the planet now has plot… And mysteeeerious ruins! 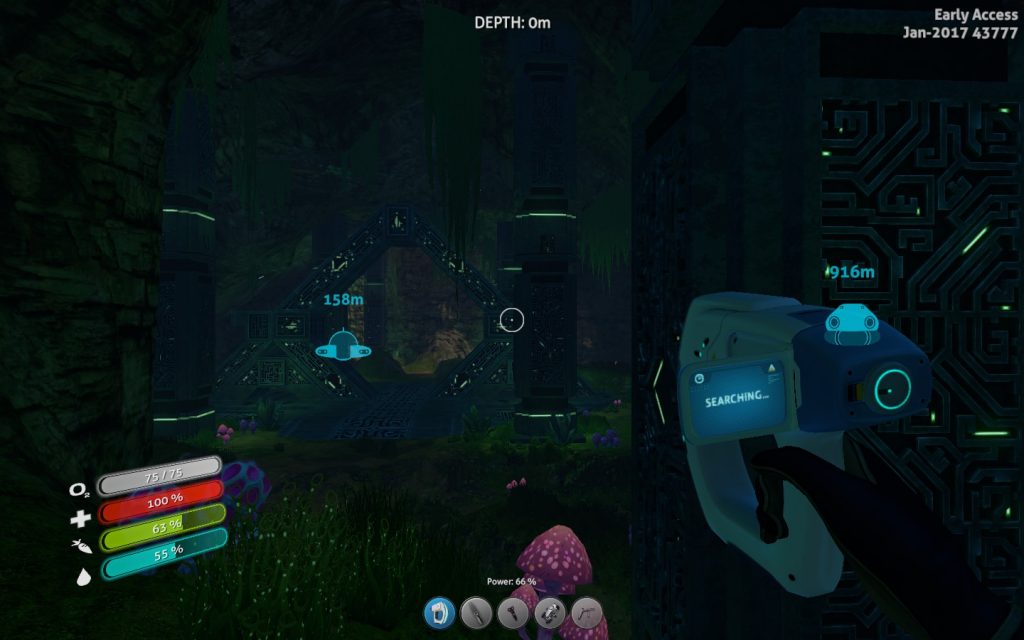 Mystery! Excitement! Danger! All of these can be found… In a videogame!

Yes, somebody has heard the Aurora’s SOS, but at the same time… Do you really want to leave, considering there are alien ruins, and teleportation technology, maybe other useful things, and maybe, just maybe, the off switch for whatever the heck blew up the Aurora? I certainly wouldn’t. For £15, the game is highly reasonable, and is only becoming more reasonable as time goes on. Check it out if you like mysteries, living under the sea, and exploration.

The Mad Welshman grinned as he looked at the alien ruins. Triangles… Why was it always triangles with these aliens?