Dungetris is not, sadly, a game you’re going to be playing for enjoyment. To pass time, yes. To see an interesting idea, yes. But sadly, the creativity extends only so far, making this… Not a bad purchase, per se? But one where purchasing with awareness and acceptance of its flaws is perhaps wisest. 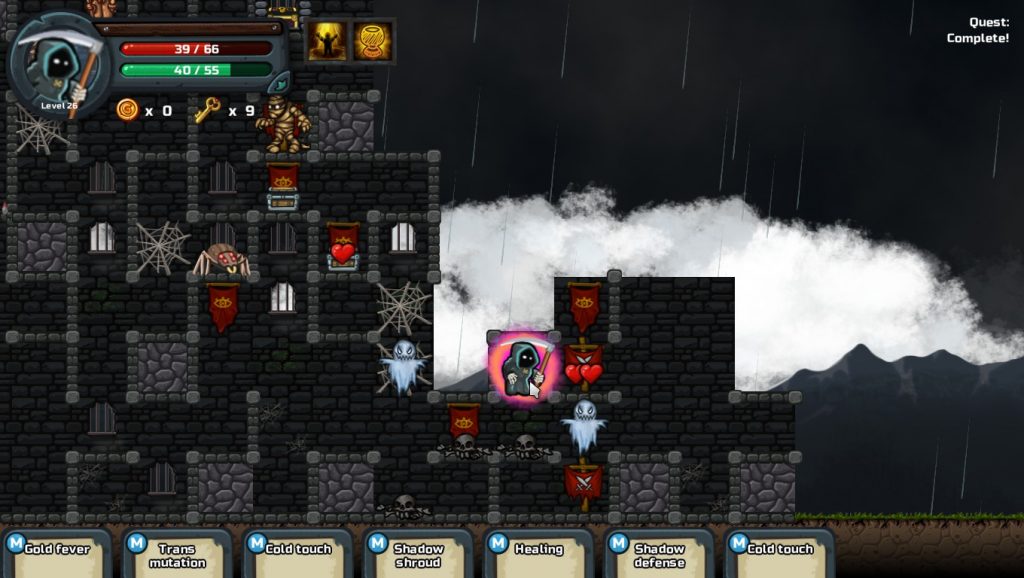 So let me help you there. The basic concept is an interesting one, balancing turn based roguelike elements (You take a step, time passes) with building the dungeon as you go in a manner similar to, but not quite like Tetris (Not all the blocks are tetronimoes, there’s no rotating them or slotting them, and unfillable spaces are filled in.) It’s fairly accessible, with clear UI, simple controls (WASD to move, mouseover for tooltips, right mouse to enter build mode, and left mouse to either place blocks or interact with chests/gubbins/cards, although the arrow keys are sometimes usable), and everything is mostly explained.

But problems become apparent fairly quickly. There is precisely one music track, and the sound can best be described as “Blah.” It’s there, but that’s about all I can say. Similarly, there are unlockable characters, but… They don’t seem to make a huge difference (Death is somewhat dodgier, Loic is somewhat tankier), as most of the tactical considerations come from block placement, getting the drop on enemies (Sometimes as simple as placing the next tile in the right way, others as annoying as hitting space to wait until they step next to you), and on card usage. It doesn’t help that, while experience is persistent per character, it is per character, so properly levelling up means replaying the levels, and…

…Here we come to the core. There’s that basic idea. And it’s good. Okay. Fine. But at something like a third of the way through Act 3 (81% complete, if steam achievements are any arbiter), it’s been “Kill X of Y” nearly all the way through. Sometimes that’s been relatively easy (Kill X Enemies, full stop.) Sometimes that’s been a bit finicky (Kill X Enemy Type Y, not guaranteed to spawn in any tile.) Sometimes, it’s just a pain in the arse (Kill X Elite Enemies, which, as the screenshot below shows, was the time I stopped to write this.) 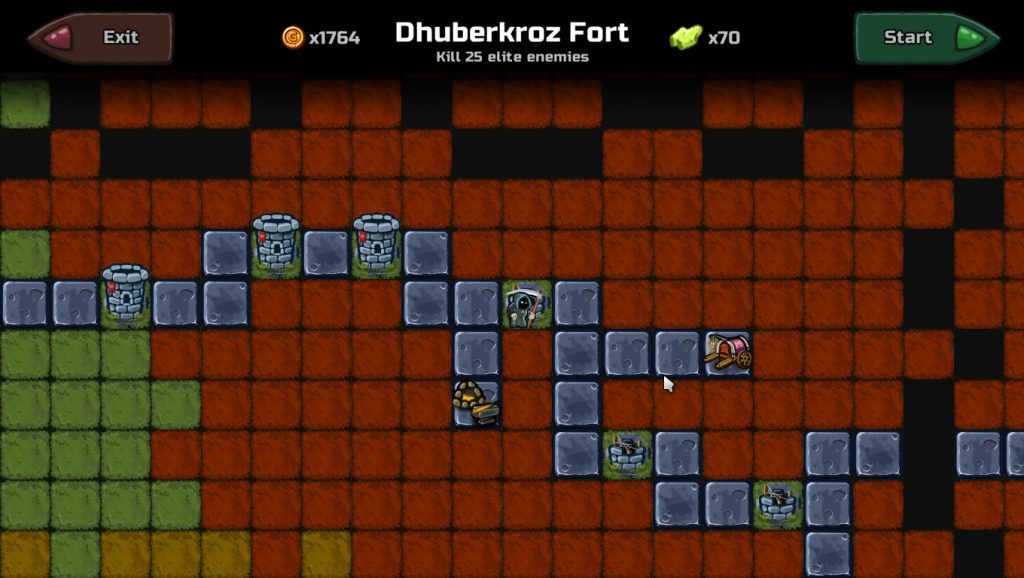 What do these have in common? Padding. I have all the cards, so there’s no sense of progression there. I have all the characters, and progression of more than one means more of the same. New tiles and enemies stopped appearing somewhere near the beginning of Act 2, and, due to the way the tiles work? I’d killed the boss of Act 2 in… Pretty much every level. So when I was asked to kill the boss at the end of the act?

Act 3’s first level, and the Rescue Smith level (allowing you to reach the smith early to upgrade cards), have been the only major difference so far, and… I wasn’t terribly impressed with either, sadly. The first required you to beat the boss before finding the Smith tile (Either that or continue to place tiles after the boss one until you hit the Smith tile), and the second required placing 200 blocks.

If you guessed, while reading that paragraph, that it feels like padding? You win an imaginary cookie. Stuffed with padding. 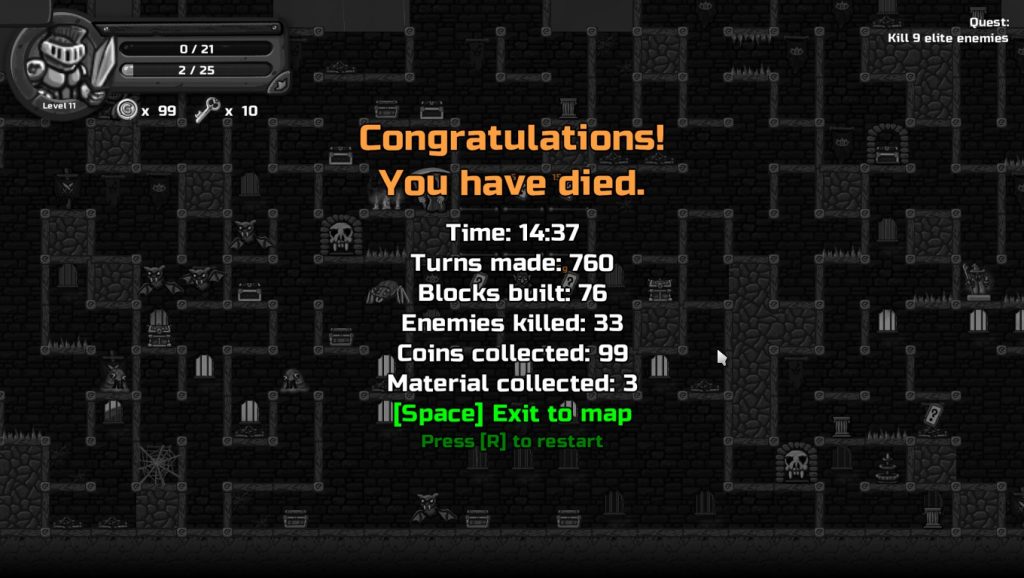 Death is usually a result of either being underlevelled because you switched characters, or poor planning. That’s… About it, honestly. Note: Both Space and R kick you back to the main map rather than R restarting the level. This may get fixed in the future. Maybe.

So, in the end, I can’t really recommend Dungetris, as it doesn’t have much going for it except grind, but I can’t say it’s bad… Just shallow, grindy, and padded out. For £4 , though, if you want to take a look, it’s still fairly accessible, and a good time waster, but that’s about the extent of its good points, sadly.

The Mad Welshman hefted another oddly shaped brick with a monster in it. He was hoping for a chest piece, but you know how it is with these brick sets… Can never find the one you want.