Source: Birthday Gift (From family, to clarify)
Price: £10.99
Where To Get It: Steam, GOG, Humble Store

Hoo boy. When you spend time on a game knowing you have other things to do, important things, you know you’re onto a winner. On that note, I need to eat. Both of these things are fitting for Stardew Valley, and I will elucidate more once I’ve got some food in my belly. 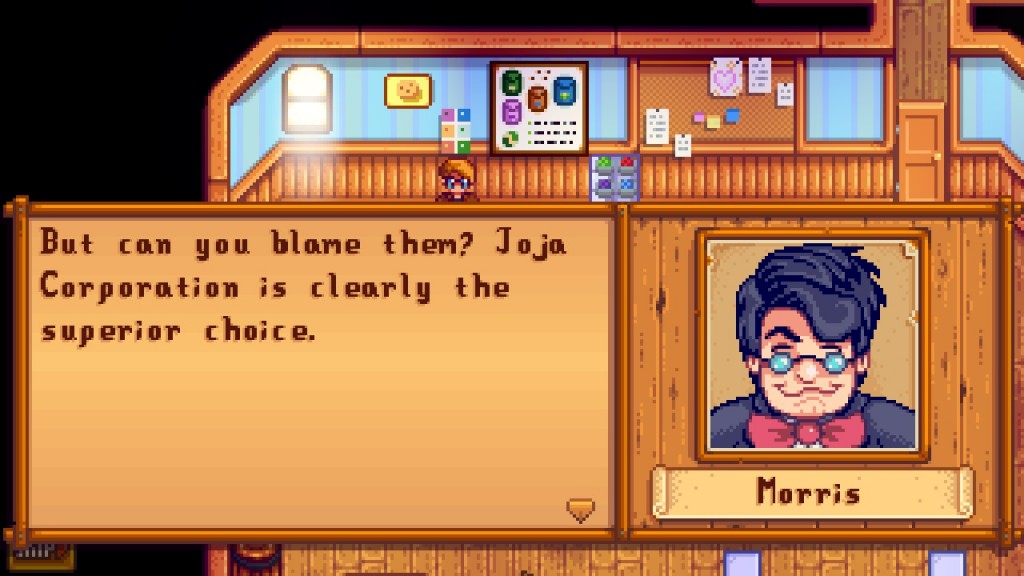 Morris is our Capitalist moustache twirler for the game. Also our ex-boss. And yet, the choice is there to side with him.

Stardew Valley, by Concerned Ape, is quite obviously inspired by Harvest Moon and its fighty cousin Rune Factory, as you are an office worker who has decided he wants to get out of the rat race, and, er… Into farming, which is a whole different kind of rat race. Pastoralism, Ho! So he moves to the village of Stardew Valley, and starts a whole new life, with backbreaking labour, and never enough time in the day.

Or, like me, he could largely ignore the farm the moment he got a fishing rod and a sword, beating up slimes and catching new and amazing fish. It’s the sort of game where yes, Farming is a focus of the game, but by no means the be all and end all. There’s the social aspect of the town, the collecting, and… I need a wiki to keep track of everything I might possibly want to do. Which, strangely enough, is a problem. Either you’re going to go to a wiki to know “How do I do thing?”, or you’re going to be playing more than once. Part of the reason this review has come out so slowly is that I took the latter option. The game does some tutorialising well, but expects you to learn other things on your own. 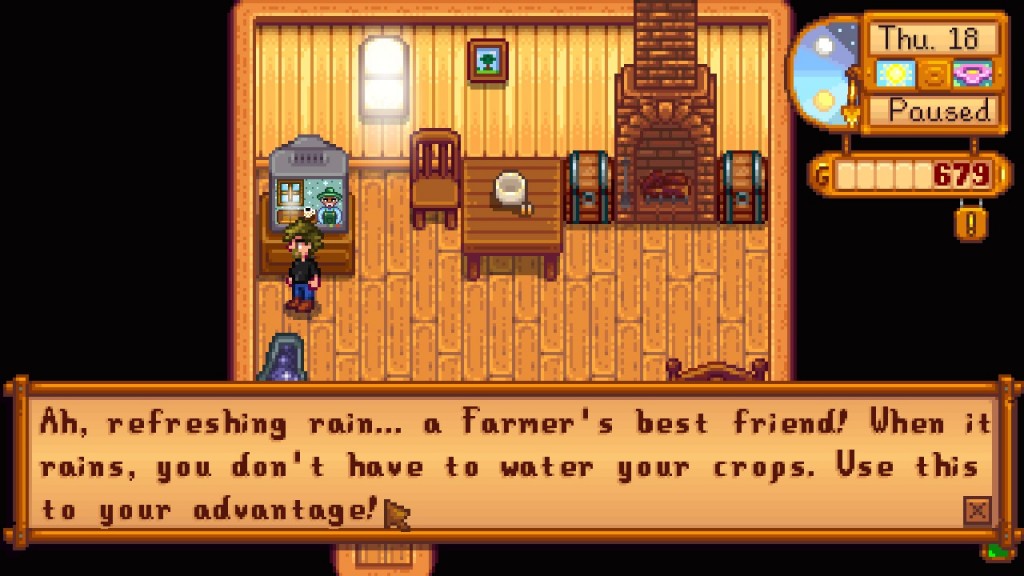 The game does try its best to add teaching as it goes along, with TV shows and books to teach you various aspects of the game.

But the thing is, it’s also a good thing that there’s so much to do. The world is relatively small, but you don’t feel that, because it’s jam packed with interesting decisions and interactions. It has character, from the visual design (Friendly and cartoony), to the sound design (The music is lovely, and the sounds support your actions.) I even enjoy the collectathon of the Community Center, despite normally hating such game measures, because it feels part of the spirit of the game. Essentially, it’s pretty cohesive, and even some of the bugs are amusing, such as Abigail’s seeming desire to eat Quartz (“Oh, how did you know I was hungry?”.) Also helping is, hey, relationships aren’t limited by your gender, and there’s a lot going on there, too! As such, I find myself drawn in, because there’s that “Just one more ho- Wait, it’s 5AM?” factor to the game.

Of course, the final problem with so much to do in Stardew Valley is… How can I cover it all? I could give you lots of examples of both good and bad (The well, for example, seems largely useless to most players in the early game… But it is useful if you’re farming extensively), but all I can really say is “It is mostly good, and enjoyable, if you liked Harvest Moon, Rune Factory, or Recettear, this game may well be worth laying down your money for.” 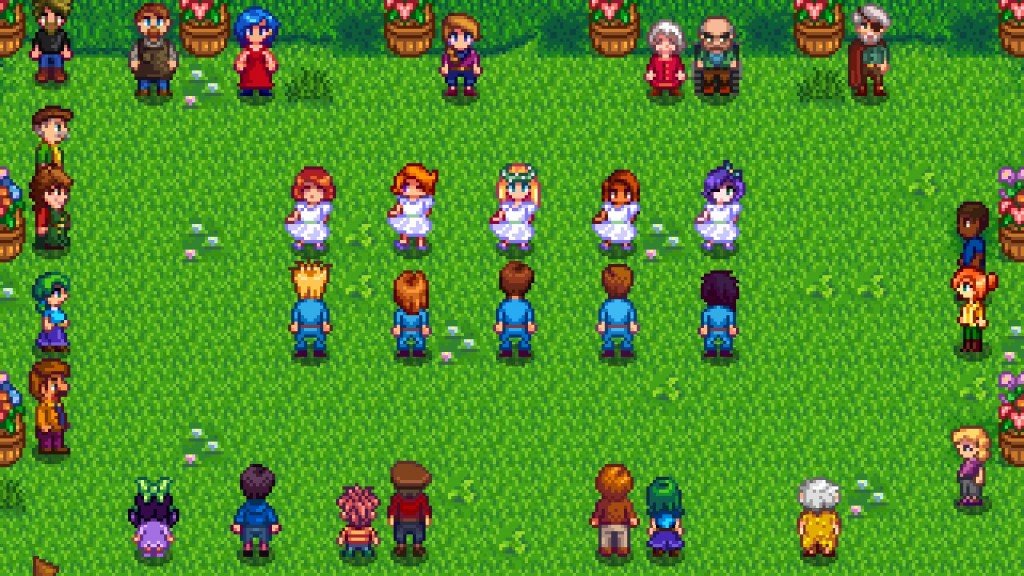 Oh, and there are events that happen, like the Flower Dance. Or the Egg Hunt. Or the Luau. And birthdays. There’s a fair bit.

There. Now, if you’ll excuse me, I have a budding geologist to woo, and a dungeon to fully explore, and all the fish to find, and –

The Mad Welshman was not found for several days after this review, whereupon somebody realised that what they thought was a duvet was playing Stardew Valley.