Source: Supporter Donation
Price: £19.49
Where To Get It: Steam

I thought my disguise was perfect. Who would have suspected The Mad Welshman, noted vaudevillain and spotlight hogger, to dress as a distinguished old lady? Statues checked and swapped: Check. Ambassador bugged: Check. Guest list purloined: Check. All in under a minute. Time to enjoy my drink, and… 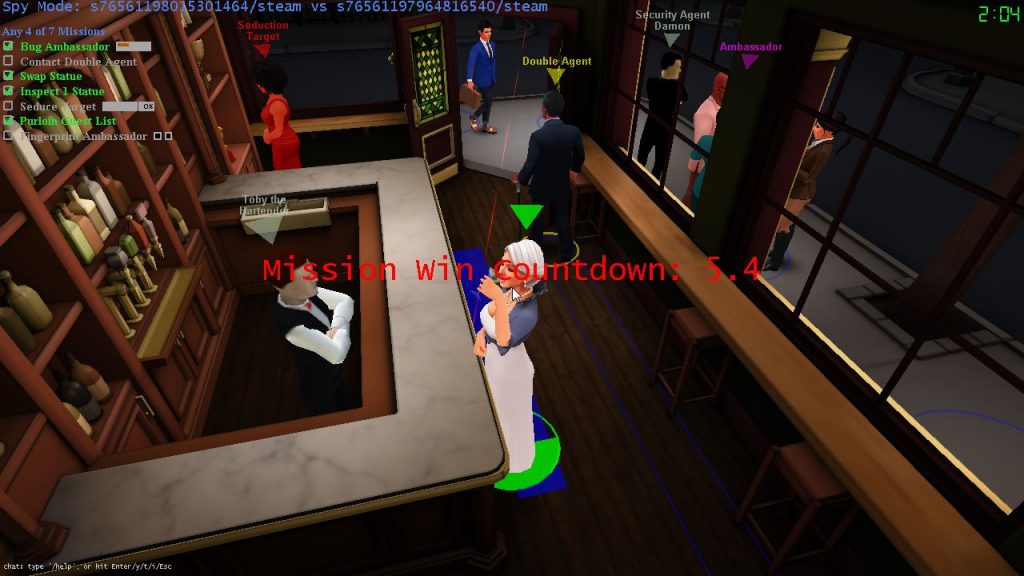 Well, in the middle of savouring the drink, a high velocity round, the only one the sniper has, enters through my ribcage, putting paid to my dreams of living high on villainy. My opponent calmly explains how they tagged me: They knew that the Pub was a git to see the statues in, so they suspected me from the get go, but it wasn’t until the guest list disappeared that they were sure. So close. The next game, they also steal the guest list, but on the move, so, instead of my rightful suspect, a diplomatic incident is created as the harmless old lady, who was enjoying a nice G&T, is snuffed out due to a case of mistaken identity.

Spy Party is a simple game, in one respect: There is a sniper, whose laser sight is visible, and who has one bullet, watching a party in one of several locales. There is a spy, who has to achieve a certain number of missions without getting sniped. You would think, considering that the possible objectives go up, but the number of objectives to achieve remains roughly the same through most of the difficulty levels, that it would be stacked in the spy’s favour: Anything up to 16 guests, only a few of which can be ruled out (due to being targets for the spy in one respect or another), and an average of 7 possible objectives per area. 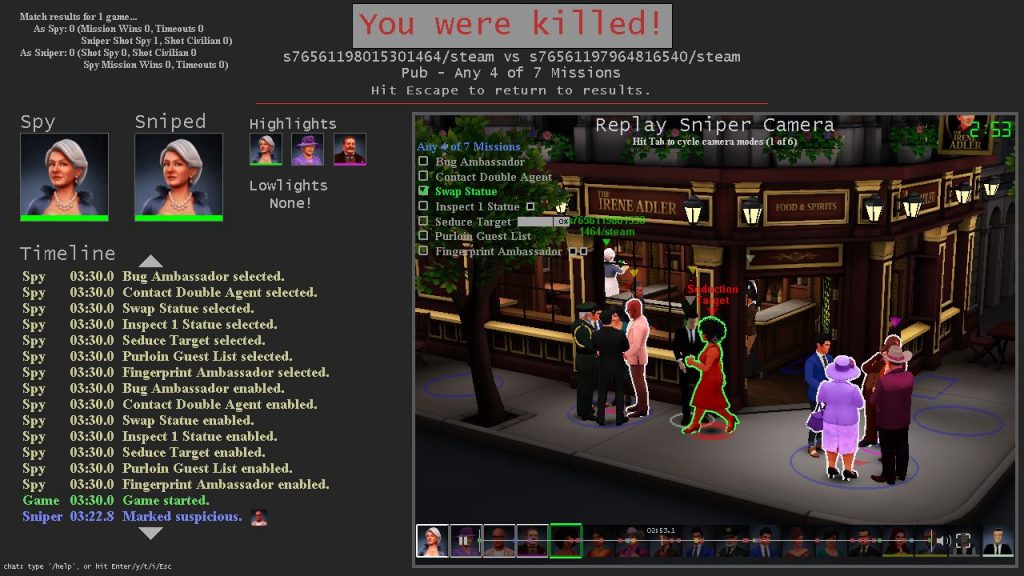 The replay function, in combination with helpful players, is very useful for working out what went wrong… Or *so close to right, dammit*

But this is without accounting for the fact that there are any number of tells that can give you away. Sometimes, as with contacting the Double Agent, it’s loud. “BANANA BREAD”, the game declares. Sometimes, as with another game I played, they’re subtle. “Oh, you picked up your glass and went straight to the statue? The statues need to be picked up with both hands, so the AI doesn’t go to the statues unless they’re on their last sip.”

See? So obvious once it’s explained… But it caught me out. But it goes the other way, too. You can, if you’re clever (and a little lucky) grab the Ambassador’s briefcase, fingerprint it while walking, hand it to the ambassador, and bug them, all while strolling to the next conversation. One objective, and a part of a second, with no-one the wiser unless they’d already pegged you. A false contact, while the sniper’s looking at another of the two Double Agents, can get them suspicious of exactly the wrong people. There’s a lot of depth to it, and this is early days yet.

It’s not all roses with Spy Party, although it’s a solidly designed game with a lot of depth… The lobby’s an old school IRC type deal, with a little reading of the manual needed to understand how to, for example, make your own room (it’s /mr “[room name]” , by the way) , but playing publicly is currently alright, with players often explaining how they got you. 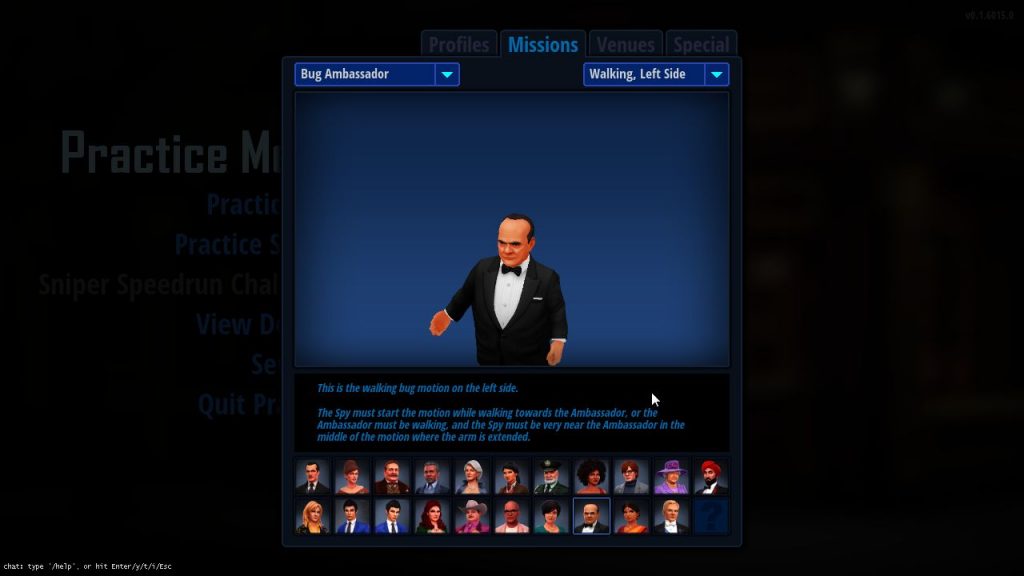 The Dossier, while not quite finished, nonetheless shows you what you can do, and is thus a useful source of tips… For both sides!

Spy Party is multiplayer only, but it’s definitely a multiplayer game I can get behind, one with depth in both perspectives, some good old fashioned psychological warfare, and a clever premise, well executed. Games are 1v1, and, if you have friends, it’s best to make a room, but if you want a multiplayer game with thought required, this is definitely one to look out for.

The Mad Welshman will snipe you. He’d snipe your little dog, too, but, y’know, Intelligence Service budget cuts…