This review is mostly going to sound like gushing. And, in a sense, it will be. Because most of the flaws with Read Only Memories are in questions unanswered, and in flaws with the interface. But the core of the game… That induced a different type of gushing. But I can only talk about that in general terms, because… I don’t want to spoil things for you. 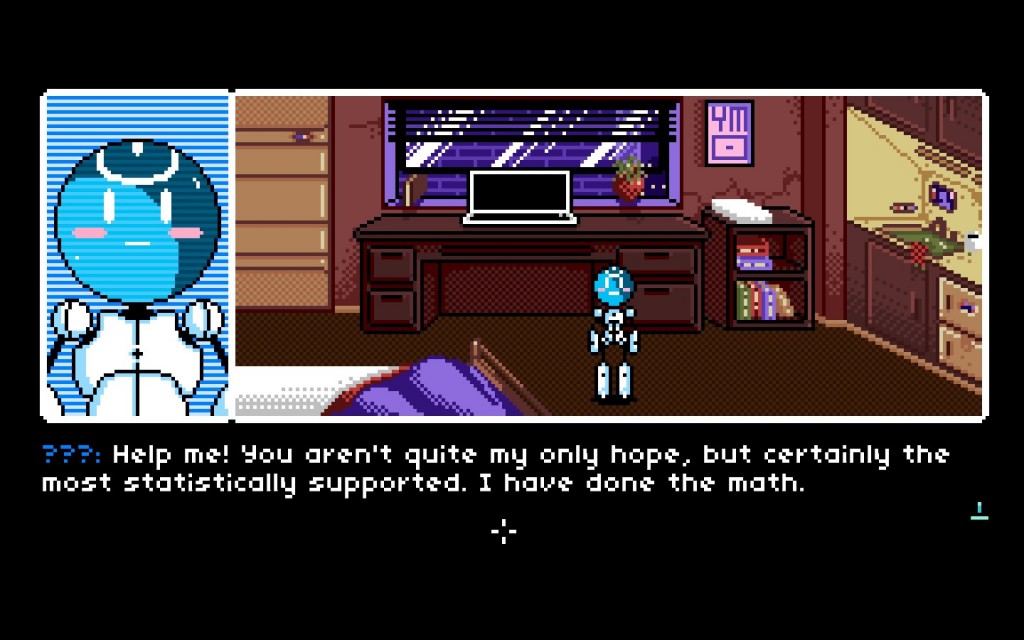 Turing is adorable, if somewhat… Logical at the beginning. He definitely develops, though.

In any case, Read Only Memories is an adventure game, similar in style to older games such as Cobra Mission, Snatcher, and the MacVentures, in that you have a first person view, and interact by clicking on things, then clicking on icons to do things with them. The inventory is a pop-up box menu, and dialogue runs across the blackspace at the bottom of the screen in JRPG fashion (Y’know, typing letters individually with the option to left click to hurry the words along already). It’s got its problems… For example, the dialogue clicking can lead to missing information if you want to hurry things along (A fast mode helps, but only somewhat), and your interaction icons will sometimes require you to move the mouse away from the thing you clicked, and then back, before you can do the thing you were planning to do.

But this is the thing: Those are niggles, and an adventure game lives or dies on not just whether fans like it, but the story, the aesthetic, the themes, and how it deals with them. In this, Read Only Memories does a good job. Visually, it’s going to remind you of Snatcher. Simple, pixel graphics, anime inspired, and most of it looks like a Syd Mead vision of the future rather than grim and gritty. But make no mistake, the story is a grim one. Turing, a self aware robot, breaks into your home to ask you for help in finding his creator, who had been assaulted, possibly kidnapped. Things snowball from there to corporate intrigue, felonies that would make Gabriel Knight or the cast of Day of the Tentacle wince, and… Not gonna lie, you may well cry at portions. Don’t be ashamed of that, it’s both a testament to your empathy, and to the creators’ solid narrative design. 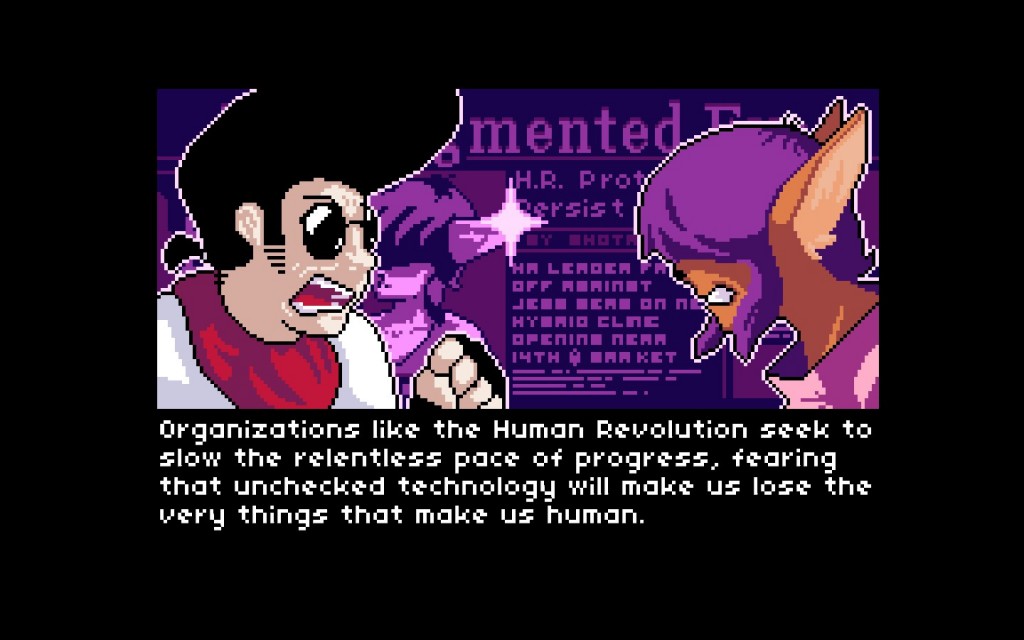 For all that the visuals don’t match perfectly, they match well enough that you believe in this future, where conservatives aren’t worried so much about the colour of your skin as to whether you want to look like a cat or want to improve on the human design with technology, and where robots, for common convenience tasks, are both common and believable in their functions. It’s cyberpunk as hell, in its way, because you’re not a powerful person (A media/hardware journalist, in fact. 😛 ), and it explores themes of consciousness, and privilege of the future, in a very succinct manner.

Perhaps a little too succinct in places (You may never understand why assuming that a feline person might be the TOMCAT you’re looking for is offensive, and the game won’t tell you unless you’re prepared to fuck up more than you already did), but the writing is tight, the music is fitting (I can’t think of a single track that didn’t fit the mood). The sound design is again mostly reminiscent of games like Snatcher, and what rare voice acting there is (The cutscenes) is fitting. What I particularly like, however, is its accessibility. It’s easy to understand, easy to get into, and, while the cutscene sorta assumes a gender for your character at the beginning, that’s not quite true (That cutscene is another niggle), as you can not only state your name, but your preferred pronouns as well (including custom pronouns). Since you never see yourself, and the character is mostly a tabula rasa (within the usual limits of games with dialogue choices), this is a good design choice. I went with they/them/their, and my own name… I don’t particularly know why, but… It felt right. 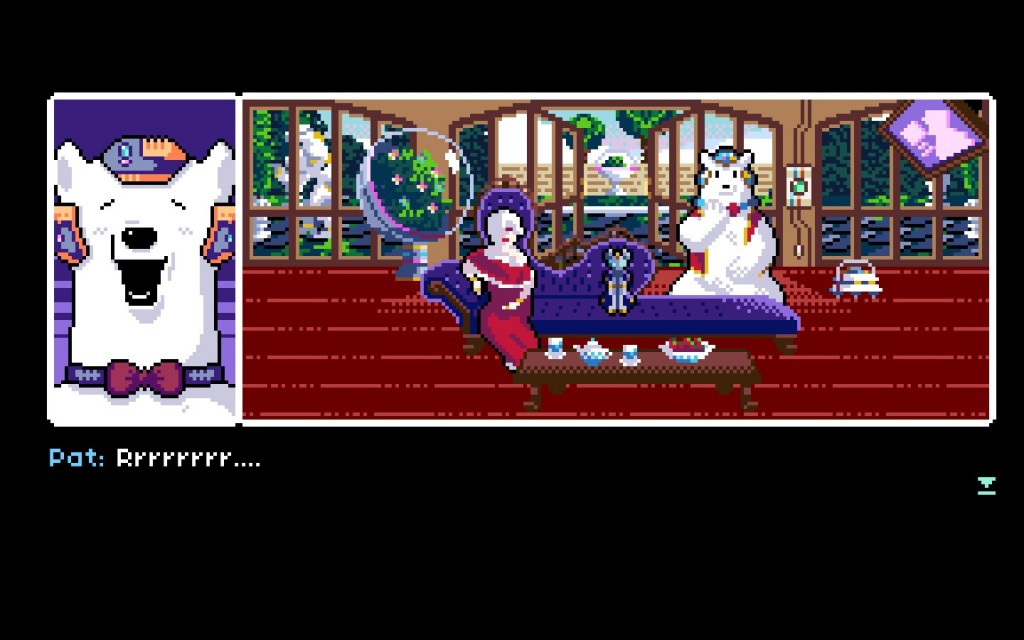 You may not think this makes sense. But it does. In context.
…Why yes, this is a subtle way of my saying “play the game”, why do you ask?

Read Only Memories can be completed in around 4 hours, but multiple paths and endings mean that this is definitely a replayable game… Yes, including bad ends… Most of the cheevos are hidden, another good design decision. As such, I would recommend this to quite a few folks out there, as it’s a simple enough adventure game (mechanically) that it would be a good entry point for folks who have been scared off adventure games before, adventure game fans will find the puzzles mostly well designed (I don’t know if there was a quiet way to do some things. Maybe I’ll find out later), and cyberpunk fans… Yeah, this is cyberpunk as hell. I definitely feel good about my £10, and I think (Don’t take my word for it, obviously!) that many of you will too. Even if, y’know, you get sniffly and tear up like me.

I’m not going to tell you what end I got, but… Folks who know me and my writings won’t be surprised about it, I’ll say that much.

The Mad Welshman sighed as he read news of another zaibatsu dealing with corruption in the ranks, sipping his Strawberry Power Hassy and brushing his long, dark mane. Sodding business news, he thought.