I’ve been staring at the page for a couple of minutes now, trying to marshall my thoughts. Behemoth’s strange worlds tend to do that to you, and Pit People… Well, Pit People is a doozy, world wise. A strange, disconnected world that somehow still works, both bright and malevolent. But, before we talk about that, let’s talk about the game itself. 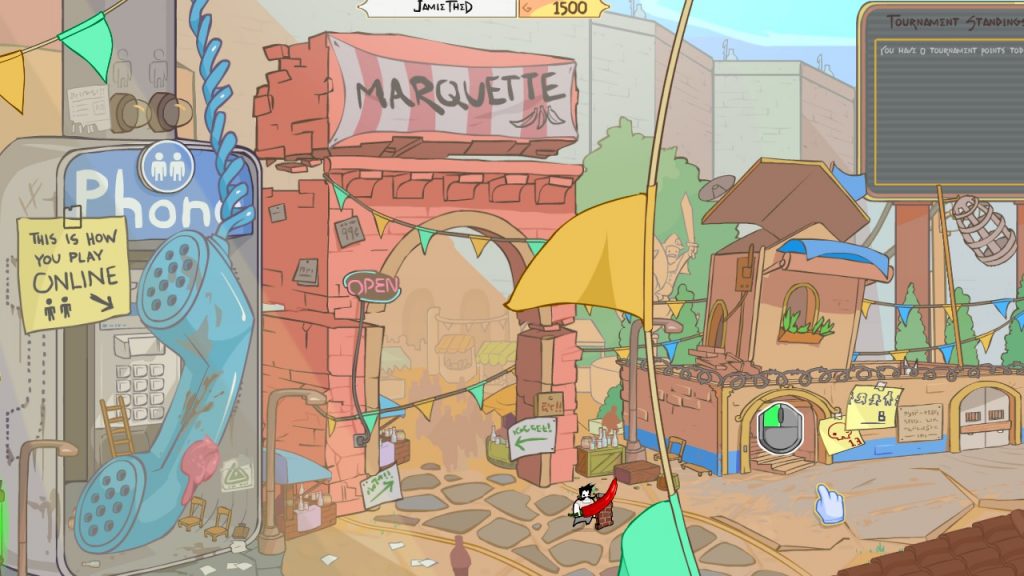 Not pictured: Everything is bouncing to the music. The world is very much alive.

Pit People is a game with turn based combat, but real time exploration, where you explore the shattered world to which you belong, doing quests as Horatio the Boring Blueberry Farmer and his cohorts, gathered through accident, capture, and the whim of the malevolent and petty Narrator. It also has co-op and PVP, and it’s hard enough to describe that, for the first time in perhaps ever, I’m going to be putting one of my stream videos here. Warning, there are cries of “What the helllllll?!”

A lot of them. In any case, Pit People is quite accessible (Blue and Red are the main colours), easy to learn (the various character types are fairly well tutorialised, as are weapons and armour), and a little bit grindy (You have a loot limit in exploration, meaning multiple trips or a co-op partner if you want to collect things) , but, thanks in part to the Behemoth art style (simple, clear, characterful), in part to the music (pumping), and in part to the occasional interjection by the narrator (voiced by Will Stamper, the narrator of Battleblock Theater), it doesn’t feel that much of a grind a lot of the time. Enemies can be avoided in the exploration, with cannons or with movement, battles are usually over moderately quickly (And the rock-paper-scissors type elements are easy to understand.)

Yes, I actually quite like how Pit People is going.

Story wise, it’s… A thing. A giant, dying space bear crashed into the world, shattering it and turning it into a post-apocalyptic hellscape, where its malevolent god, The Narrator, malevolently snickers and directly manipulates events. He’s taken an interest in Horatio, a humble Blueberry Farmer, and so a great adventure begins. An adventure in a world where cupcakes are people (and also delicious), Queen Isabella waits to conquer the world, and the evil Helmetites (so called because they wear helmets, you know?) bully the weak. Oh, and there are pit fights, demiclops, medusas, ghosts with keyboards… It’s all very strange. It would perhaps be unbearably so, if it weren’t for the black humour provided by the Narrator’s pettiness, and the charm of how most of the characters speak nonverbally, but somehow clearly. “After giving her half of his remaining blueberries…” , “HUH? HUMEHUHNUH!”, “NO, you GAVE her your BLUEBERRIES.”

Why yes, that *is* a Cupcake Friend. He has waffles. And buttercream…

See? Perfectly clear! Pit People is perhaps the first game where I’d recommend watching the stream video, which covers the earliest moments in the game, then decide for themselves. I happen to like it, but tastes may vary widely.

The Mad Welshman gave his ups to Pit People [HUH? HUHME] YOU GAVE YOUR UPS TO PIT PEOPLE, JAAAAMES.