This piece was originally printed on my personal blog, while planning the move back to freelance Game Journalism. Certain sections have been extended.

So, Joe Martin, a short while back, wrote a deservedly scathing piece on Games Journalism and Money , specifically the phenomenon (Which I myself have fallen victim to at least once in the past, for reasons I’m going to go into) of unpaid reviewing, often badly justified. I’d recommend you read that piece first, because it’s an actual concern, and it’s pretty widespread. Furthermore, I’m going to go into a bit of detail as to why this hurts the industry in general.

So, the problem of pay is one that has struck journalism all over, but has affected Games Journalism on pretty much an endemic basis, pretty much since the internet hit. There are also several factors that complicate things, and it’s those I want to go into a little.

There Is No “Ideal” Pay Scale

I thought I understood this game at about five hours. Then I hit the biiiig difficulty spike for completionists at around fifteen. I still play an hour or two every now and again, but it will be a long time before I finish it.

That you should be paid for your writing, and that the review copies are tools for your job, not the pay itself, is indisputable. It is a product you are meant to review, for your job. But there are only two types of payscale out there: Flat rate, and per [X Period]. Neither of them are ideal for games reviewing. Let’s start with per hour, to illustrate the point.

Let us say I am paid £6.75 an hour (Pretty close to the minimum wage for my country) for reviewing one of two games. One of them takes four hours to complete (Allowing a complete picture of the game), another can be completed in thirty hours, but a complete picture of how the game works may take up to fifty. Bam, instant lack of incentive to choose the smaller (But possibly better) game. It doesn’t help that, unless it’s on Steam, your editor can’t actually check how many hours you’ve played unless all work is done in the office. As any freelancer can tell you, this mostly isn’t where you’re doing things from.

The same applies to a flat rate, but the other way around… I am encouraged to pick the smaller game to review, because it will give me a better return on my writing. It must also be noted that how buggy a game is can further skew this, one way or the other. Sword of the Stars 2, for example, brought my computer to a BSOD four times when I reviewed it, and if that had screwed my computer? Well, then either the editor has to fork out for replacements (Providing the company has such policies, and really, since they’re also tools of work, they technically should), or you’re out of pocket for not only the review (Which won’t be able to be technically finished), but also the replacement parts.

“What about a sliding scale?” Ah, well that disincentivises the editors and owners from larger games. They have to pay you more, for a larger product.

Personally, I’m okay with a good flat rate, and so are most folks I know. But it’s not ideal, and I doubt it ever will be. But so long as I feel compensated for the hours of work, I’m good. Of course, this segment applies mainly to places with multiple writers, and for freelancers wishing to work for said places. For writers who wish to go it alone… It’s somewhat different.

You may like my writing, you may not. I hope you do, because I enjoy writing, and I enjoy talking about games. But the very fact that I have, in the past, gambled on a startup which has pulled this unpaid (Oh, but we’ll pay you if the site starts paying out!) bullshit has, and will bar me from writing for many paid sites.

In my defence, I will say that unemployment makes you do desperate things at times, reaching for any olive branch that will even have a chance of getting you out of the dole queue. But it also needs to be said that punishing the potential writer for taking such a gamble, out of desire for entering a field that, quite frankly, isn’t amazingly friendly to newbies (Due to limited paid positions, and a relatively low turnover in writers) is Not Cricket.

Judge a writer by their writing, by their passion, their style, and their eye. Please don’t judge a writer for falling for promises, because as it stands, it’s not easy to get in to the treehouse.

Why It’s Hard To Get Into The Paid End 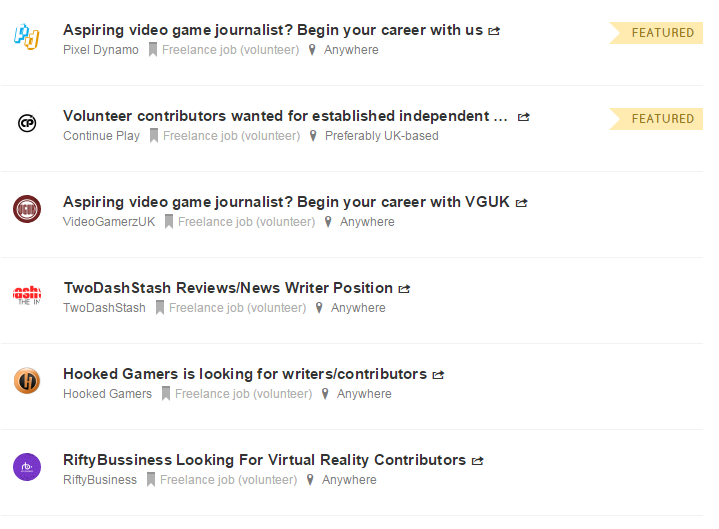 A selection from Gamejournalismjobs.com … Most of these adverts can and will use the language in Joe’s article. Oh, it’s always so fun to scroll through the- [shoots self]

Go google game writing jobs. I’m a member of a LinkedIn group for video game writers. I search every now and again. And 90% of what you find will effectively be these unpaid internships. Even many of the “paid” positions will either have some restrictive conditions, or will have catches. I’m looking at one right now that isn’t paid in the work sense, but offers $30 for the “best contributor of the month”. Of the month. I’m looking at another, and I don’t actually see a mention of pay beyond its existence. I may ask them what, exactly, they’re paying… But I don’t expect a very useful answer.

I can remember the last time PC Gamer made a call for new freelancers. because I sent a piece in. I can’t recall getting a reply back, though. And you can guarantee a lot of writers applied. We’ve already mentioned low turnover on paid sites, but another problem is knowing which sites pay. Because you can guarantee jobsites like Indeed or LinkedIn aren’t too helpful. You can definitely guarantee many places and groups specifically for game journalism are going to be a fucking slog, because all of them, to some extent or another (With an average of “Two hours before potentially finding an actual paid job on a given day) suffer from the problem I’ve already mentioned.

As to going it alone, it’s decidedly difficult. No matter what people will tell you, you have to advertise. You have to push yourself out there to get noticed, and, if you’re going the crowdfunded route, to get paid. In a very real sense, people will resist this, not only because there’s this (false) perception it’s not a real job (More on that below), but because even the majority of folks who have a stable income will, on some level, resent the idea of paying for what manifestly appears free. They resent adverts, but, paradoxically, won’t support a writer to ensure said adverts don’t happen, and that the articles keep coming. And there is this perception that any nonstandard job that requires a Patreon or the like to stay alive is “Not real work, just begging.” Let’s discuss that for a moment.

I’m writing this one from a mainly UK perspective, but it’s true nearly everywhere that, to many folks (Including our “lovely” Department of Work and Pensions), writing reviews, much less games journalism, isn’t a “real” job. Never mind that breach of contract is a real thing. Never mind that reviewing and games journalism has a code of ethics. Never mind that, if you’re doing the job, you should get paid for it. Getting advocacy for rights to the pay that you deserve is an uphill struggle, because the majority of folks who could advocate for you, who could punish potential employers for an unlawful (and unethical) internship contract, aren’t going to, because people still think of games as this limited, almost whimsical field.

“Oh, you play games for money? How quaint.”

Yeah, tell that to the QA Team who are tearing their hair out (sometimes literally), right this very minute, when they’re told “Oh, we’ll wait for the Console QA team to report this bug before we take it seriously” (An actual thing I have heard from at least one QA lead, although I will protect the sources). Tell that to the copywriters, panicking because there’s no way anyone’s going to buy this thing the company rushed, no matter how they dress it up, all over a fucking release date. And tell that to me, who lost at least one computer in the line of reviewing, who has had companies stop talking to him because he wasn’t afraid to say that their product was deeply flawed , and who has been told at times that 33 hours is nowhere near enough to have an idea of how to review Skyrim… Despite the fact that the game can be completed in less than 20 if you don’t faff about, and a number of other factors that conspire to say “Why yes, actually, you can get enough of a picture in 30 hours to review quite a lot of games.”

It All Ties Together

Image Source: An article by The Drum on “The Ad Tech Minefield”. Only somewhat fitting, but still…

Of course, this leads to a gigantic interrelated clusterfuck. We’re saturated in potential viewpoints, and that’s good, variety in viewpoints is useful for reviews! Problem is, for the newcomer to the field (Or even someone like me, who did 3 years of reviewing and games writing), it’s not easy to get paid. You’re going to get a lot of heartbreak, a lot of applications with no reply, and you’re going to be told that it isn’t a real job. It’s tempting to write somewhere for free, but the very act of doing so, no matter how much it builds your skills from practice (And hopefully mentoring) is going to close doors on you.

It’s small wonder so many folks are trying to pay their bills through crowdfunding, and though I don’t hide things behind a paywall, make no mistake… I have bills to pay too, and if I can’t pay them, I can’t keep writing. Because we’re not a friendly field… In fact, right now, we’re a minefield. And it’s going to take a lot of work to dig out those mines. I want to work toward that, and so do many others. David Wolinsky, who has tirelessly been interviewing games industry figures to combat misinformation about the field. Lana Polansky, who covers Alt-Games and the oft-forgotten artistic side of the industry. Tanya DePass, who shows us that diverse viewpoints allow games to grow, to reach more people, and to speak to more people. Rock Paper Shotgun, one of the relative success stories, who, just like me, aren’t afraid to talk about The Publisher Silence, celebrate games for what they are, not just how much they cost. And many more. There are people out there who want the games industry to improve, for it to gain respect. There are people out there who, like you, are groaning in metaphorical agony when a game is released in a state best described as “A buggy, poorly written, corner-cutting mess” for £40.

But for the games industry itself to support them is unethical. For governments to support them takes away from education, healthcare, and other things that, were they to degrade, we’d notice. You want change? Support good games. Don’t pre-order. Look for diverse views on a product before buying, to see whether it’s really for you… And help keep those view diverse, by supporting a writer. Doesn’t have to be much, individually. Because, even in my own bailiwick of PC Gaming, there’s 14 odd million folks who play. And the more who help, the less an individual “needs” to pay to support better games writing.