On the other, it’s a game where some of its options and choices are, to my mind, flawed and hamhanded. Still, let’s describe what’s basically going on. Because this will be the last time, both in game and review, it is basic. 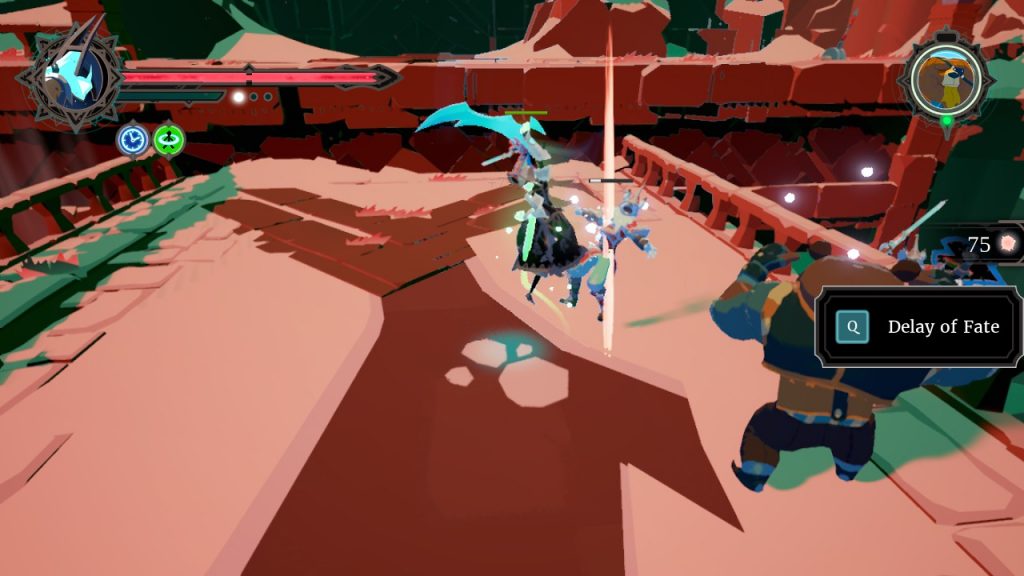 Battle animations are fluid, and you can dash quite a bit round the battlefield… But then, so can some of your opponents.

Omensight is a spiritual successor to Stories: Path of Destinies (by the same company), and involves many of the same themes and mechanics remixed. There are time travelling shenanigans for our hero(ine. Being some form of spirit, gender is not assumed) , the Harbinger. There are fights to be fought against enemies using light, heavy, and special attacks in combos, with better performance leading to better rewards (And some enemy types being largely immune to some attacks.) There’s lore to collect, with the overall goal of solving a murder mystery: Who killed the Godless Priestess, whose demise has unbalanced the power structures of two warring kingdoms, and is about to end the world in a single night?

Problem the first: The solving bit is slightly inaccurate. What you’re doing is going through the last night of four individuals, trying to encourage them to lead you to both clues and, in the end, the solution via the cunning use of memories and following them. Sort of a Dirk Gently mystery. And the more efficient at solving the mystery you are… The less you get to know about the characters, the world, and the very mystery you’re involved in, beyond the core bullet points. 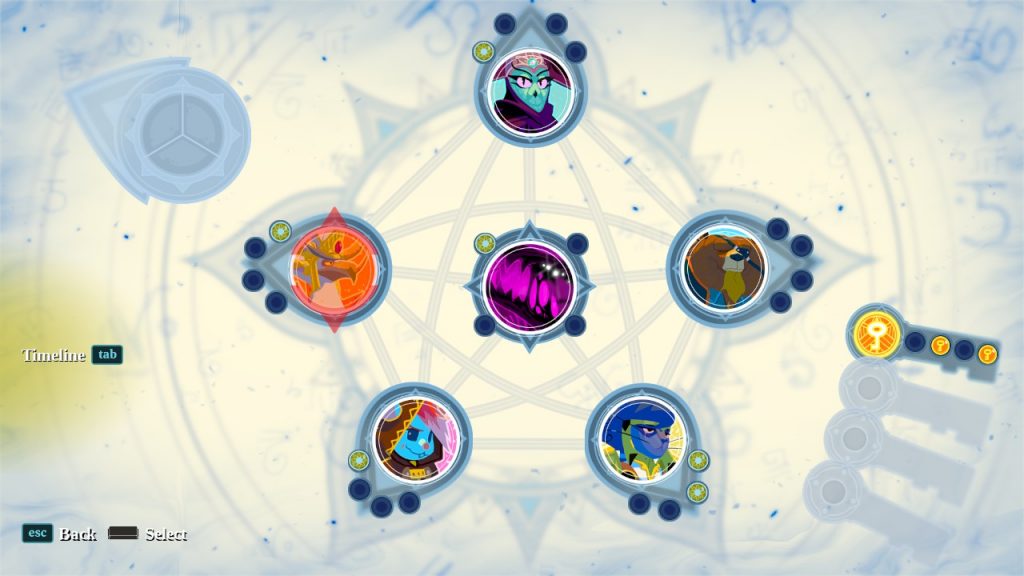 Twenty minutes after taking this screenshot, I accidentally ended up taking the path to the next chapter, through my desire to open locked doors. WHOOPS. This screen (Reminding of clues) is not available in “True Detective Mode.”

Equally, beyond a certain difficulty level in the detective mode, you lose out on a tool that can just as much remind you where you are after a break as supposedly give away the way forward. The same way forward that the Priestess will mention… The characters will mention… And… Look, as a murder mystery, it plays its hands too heavily, which means it’s very tough to miss out on the solution to each chapter’s conundrum. Which leads into the problem that you can, quite easily, miss the story collectibles because the game is too good at solving its own mystery.

Continuing on, there are four keys, and each chapter contains one of the titular Omensights, visions with which the plot’s direction… Changes. Funnily enough, the game does foreshadow its twists fairly well, even if, as noted, I don’t feel like much of a detective because its clues are heavy handed, and the four main characters are fairly well written. They play on you being a silent protagonist. Sometimes, as in the case of the cheeky (Yet brittle) leader of the Rat Clan rebellion, Ratika the Bard, they put words in your mouth. Sometimes, like when you’re collecting things, they speculate as to your motives. This can get annoying, but I also appreciate that yes, when the Harbinger, the being that both presages and is meant to prevent the apocalypse, takes a break to smash barrels for money, you too would wonder what was up with that. The voice acting is pleasant, although sometimes stereotypical (Hi Emperor as Grand Vizier! Hi Thug Bear With A Heart of Gold! ), and the music is good. Not always memorably so, but it fits well with its areas and its timing. 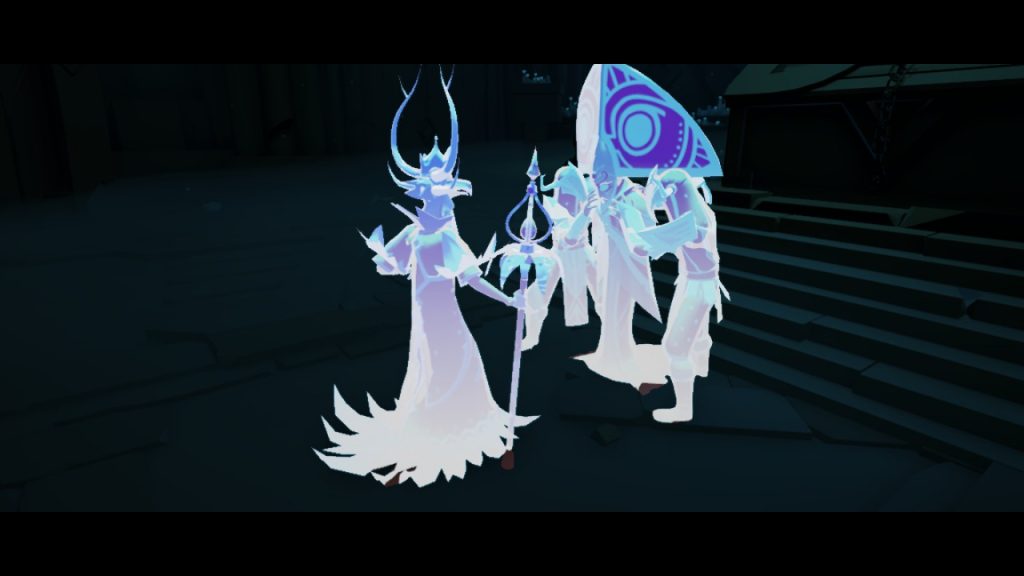 One of the titular Omensights, which the Harbinger will then show other people… To get to the truth in perhaps the messiest way.

Beyond the sound and story design, combat in Omensight is a little annoying, as, on any difficulty above the easy, quick reflexes are mandatory for the dodging, and being able to quickly visually identify your enemies is mandatory if you want to do well in a fight, as some enemies have shields (Meaning that light attacks will just bounce off), some have counters (Meaning you’d best be away as soon as the Angrier Exclamation Mark appears, or else), and some are flying, and so a pain in the rear end by definition (with the saving grace that all but one of these flying enemies falls down when hit, and can be coup-de-graced immediately after.) It doesn’t feel especially great, and, for all that there’s a lot of fighting in the game, it’s by no means the strongest aspect of it.

For all these flaws, Omensight still works fairly well, partly because it has a fairly strong storyline (Although it’s a downer… Apocalypses generally are), some solid, low poly aesthetics (Each area has a different feel, and I like that) , some good voice acting and music, and adjustable difficulty separated into the detectiving and combat end, so, if you really want, you can turn both to their lowest settings, and just… Enjoy the ride. That’s the nice thing about adjustable difficulty: You get to do you. 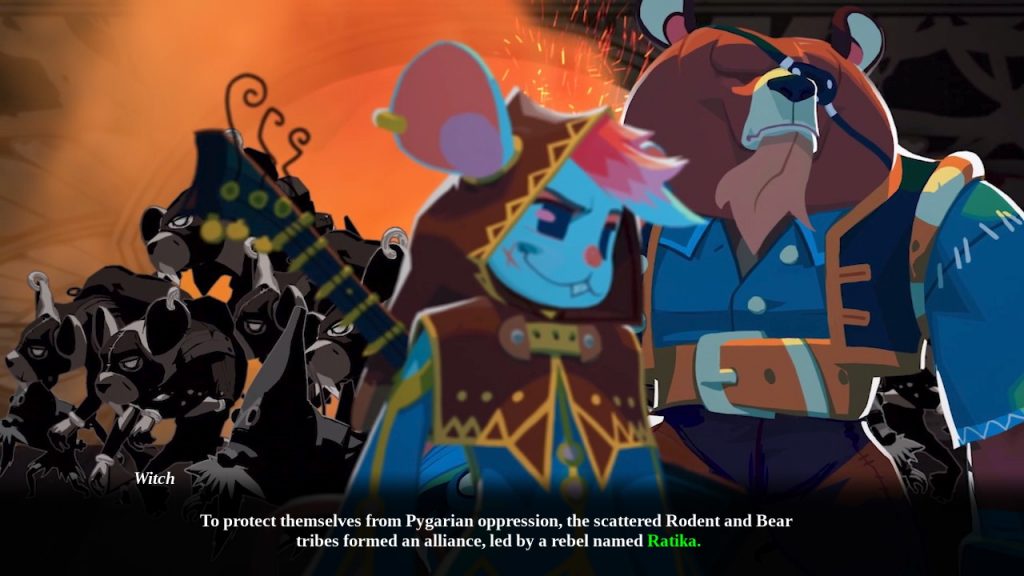 I’ll let you guess which clan is which.

The Mad Welshman doesn’t have a lot to say today. It’s incredibly hot at Chez TMW.