Source: Gold Coins from Captain Skully Bartella.
Price: £7.19
Where To Get It: Steam

The Fighting Fantasy gamebooks, the majority of which were written by tabletop legends Steve Jackson (NOT THAT ONE) and Ian Livingstone, were an interesting part of the tabletop scene, although early books in the series were well known for gotcha traps, instant death paragraphs, and some highly frustrating collectathons. Looking at you, Warlock of Firetop Mountain, and your god-damn keys. 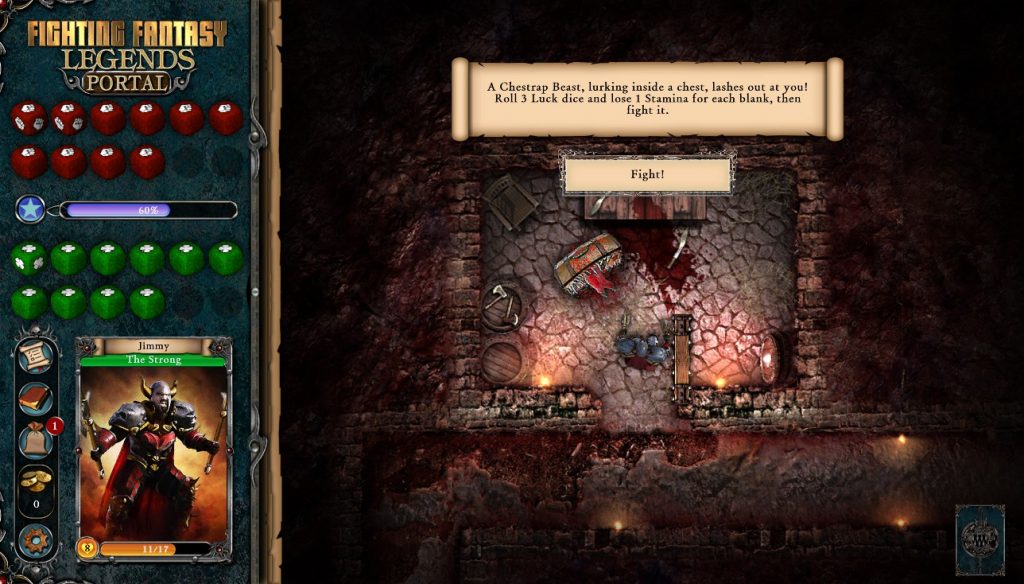 Ah, the heady days before “Mimic” became common parlance for anything pretending to be a chest…

They were also experiences that, like your linear, curated experience in a game, could be successfully completed on replaying… Through the notes you took last time, reducing the challenge of future runs.

Fighting Fantasy Legends Portal reduces the latter to a certain extent with its adaptations of the Deathtrap Dungeon trilogy (Gamebooks 6, 21, and 36, all written by Ian Livingstone), while… Faithfully preserving the gotchas, instadeaths, and collectathons.

As such, it can best be politely described as “An acquired taste.” Less diplomatic descriptions are usually long strings of vulgar language, interspersed with terms like “Garnet” , “Infinite Unwinnable Fights of Padding”, “Gotcha”, and “Black Imp.”

To be fair to the developers, they have taken steps to palliate this, with multiple difficulty levels and a lives system, allowing you to take multiple runs without losing your progress… To a point. Default difficulty has 9 lives, and, unless you are supremely lucky on those die rolls, and know exactly the path to take through the game… You will lose at least a couple of those lives. We’ll get back to that. 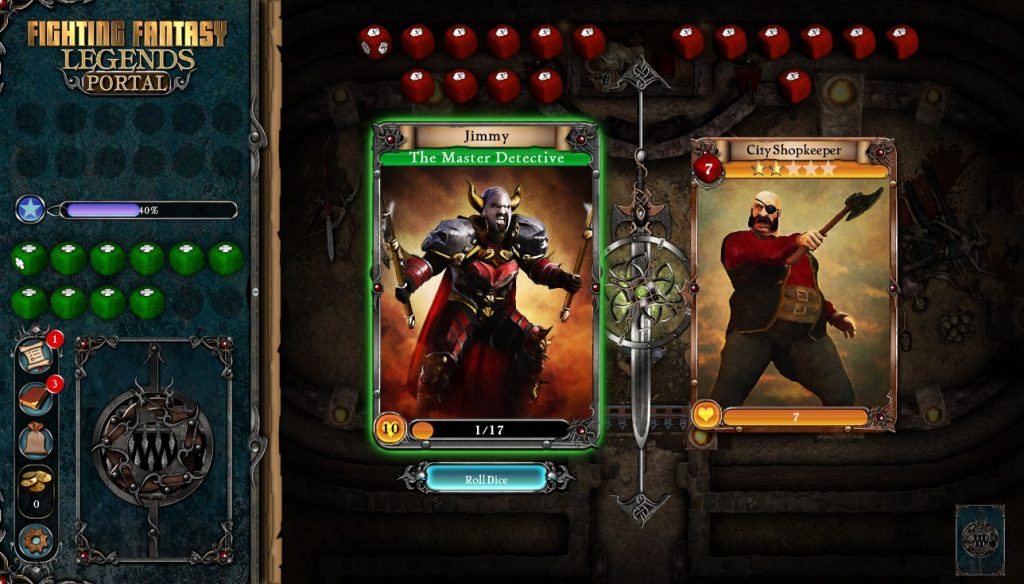 First, there’s something we’ve been missing this whole time: How have Nomad Games and Asmodee Digital adapted a set of Choose Your Own Adventure books? As a sort of top-down, tabletop like experience with dice and cards, with random encounters to both spice up the emptier bits of the dungeon, and replace one-off events that you’ve already dealt with. It looks pretty nice, with some good artwork, definitely nice looking maps, and music that doesn’t, generally speaking, outweigh its welcome. Menus are clear, and, while I would have liked some of the map segments to look a bit less muddy, clear icon signposts for direction choices and doors helps with this a lot. Text is in neat boxes, choices are clearly highlighted… It isn’t bad, in this respect.

But, amusingly enough, part of the problem is that it is a mostly faithful adaptation of the Deathtrap Dungeon trilogy. A trilogy which has some rather painful moments, such as, early in the Trial of Champions gamebook, six fights in a row, with minimal healing every two fights. Oh boy, I hope your skill rolls are good, my friends, because otherwise, even the generous checkpointing for this particular part (So notable because it’s more generous than, say, the entirety of Deathtrap Dungeon, which has precisely one checkpoint), you may well lose a few of your precious lives here! Add in some difficult, if not unwinnable fights with meager rewards in some paths, gotcha traps in both set and random encounters (Take 2 Stamina Damage. No, just take it, this isn’t a Skill or Luck roll like the others, you Just Take Damage), and some places where only memorisation will save you from unpalatable options there’s precisely no signposting for. Looking at you, rat staircase and arena fight in Deathtrap Dungeon! Looking… Right… At you!

It is, however, nice in that you do get to keep your items, and setpieces you’ve completed remain completed, even if you die.

The Fighting Fantasy Experience, Part 2. Albeit without the part where you skim through the book to find the paragraph number where you succeed.

Overall, Fighting Fantasy Legends Portal is, as noted, an acquired taste. So long as you’re okay with the fact that this digital adaptation only slightly pulls the punches of CYOA gamebooks from the 80s, with arbitrary game design moments to match, then you may well find joy and interest in this title. If this isn’t your thing, then y’know what? I don’t entirely blame you, as going back through this trilogy, swearing at various elements, and then thinking “Oh… Yeah, this was roughly how I felt the first time” was quite the experience. The game is also, at the time of writing, somewhat crash prone, although I’m sure that will be dealt with in time.

The Mad Welshman still remembers how his first experience with another CYOA series was the Deathlords of Ixia. He feels this may have had lasting effects…