When I first noticed MX Nitro, I couldn’t help but be a little baffled. Saber Interactive and Miniclip SA are not really known for MX games, be they the more traditional kind, or what MX Nitro is, which is a Trials style “Balance the bike and do tricks while trying to win the race/get a score/just look freaking cool/not crashing” type dealybobber. 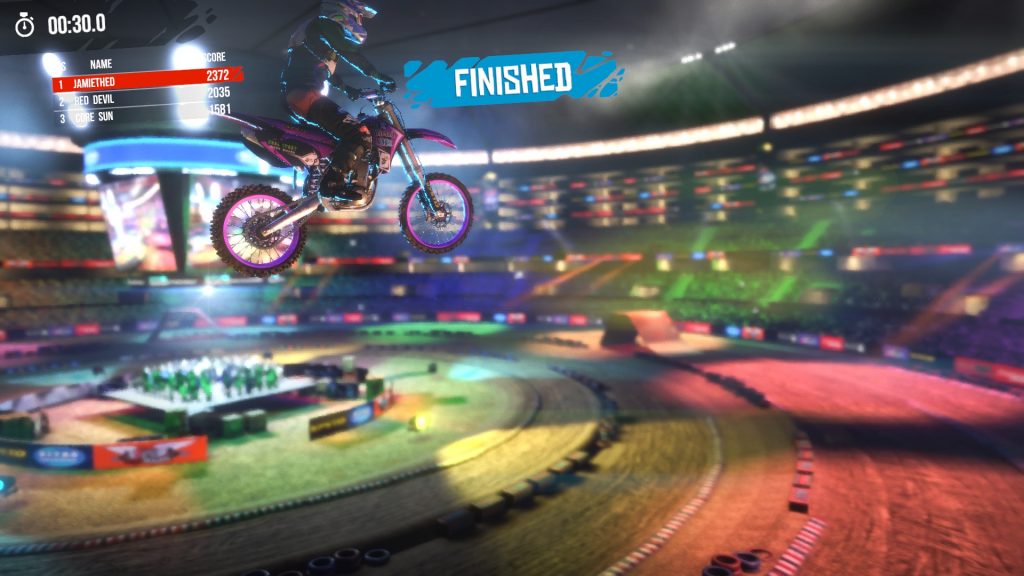 And while I wouldn’t say this was a standout example of the genre… It does okay. Aesthetically, it’s pretty much exactly what you’d expect from an extreme sports game in general. Sorry, extreme sports games, but you definitely have an audiovisual style that, on the one hand, is immediately identifiable, but, on the other, makes many of you blur together in my mind. Sandy arenas, muddy tracks, and gritty, be-puddled (Yes, that’s a word now, shut up) streets near the docks meld with moderately distorted guitar dominated tunes that you can almost hear crying anachronistic “HELLA RIDE, BROOOOO!”s , themselves melding with clashing, saturated colour gear and bikes.

What I’m saying is that if you’ve played the likes of Nail’d, MX Vs ATV, or even a DiRT game, you’d probably feel right at home, although there’s nothing standout about any of it. It’s good, it’s tunes to mash your head to despite the inadvisability of doing so in-game, and that’s perfectly fine. 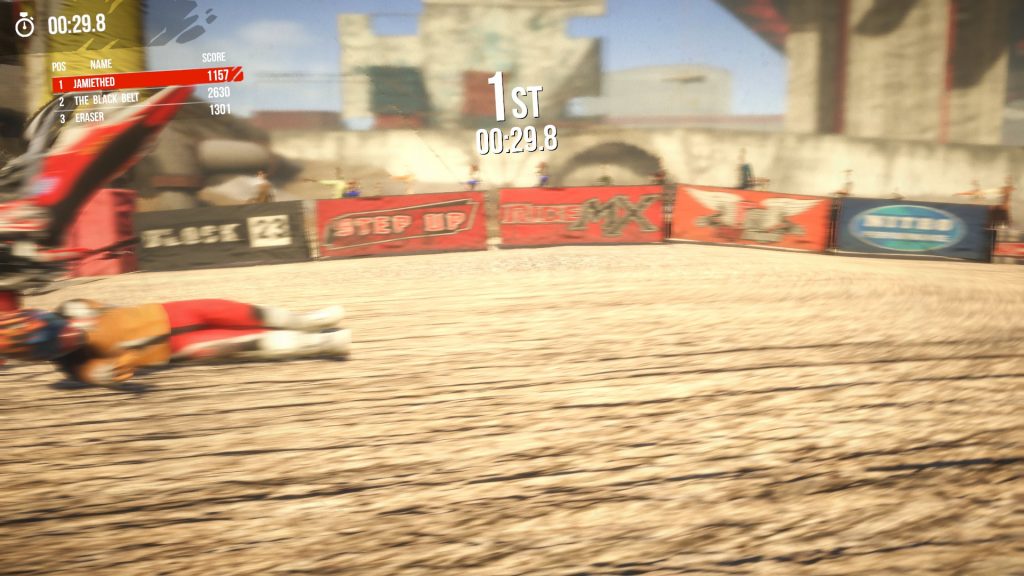 Crash, and you lose both time and position. Also, y’know, that combo you were building. Sucks to be you. However, *winning* while crashing is a very amusing thing.

A definite plus side, however, is the simplicity of the controls. Although at first you may scratch your head, the keyboard controls for MX Nitro are sensible and responsive: Up to accelerate (Always hold this down), left and right to tilt the bike backwards and forwards (For Wheelies and Stoppies, the go-to means of holding a combo), space to NITRO (Because of course there’s a nitro boost, why wouldn’t there be?) , and number keys for tricks. Unless you have very tiny hands, you won’t have too much trouble here, and there is controller support for those more comfortable with a controller.

So the controls are good, the music and visuals are what you’d expect and smooth, all of which are good… Where’s the downside, huh?

Well… Most of that is that, with that simplicity of controls, it then expects you to know them from the word go. Or, more accurately, it expects you to always be thinking about them, from the moment they’re introduced, or to fail, again and again at a stage, until you either luck out or realise what you’ve been doing wrong. While most early stages are do-able, boss stages and trick stages in particular both require you to ABW (Alway Be Wheelie-ing) when you’re not boosting (ABB. Always Be Boosting) or tricking (ABT. Guess.) Even if you do win a race stage, it feels a bit hollow to be given the star, the unlockables (Including tricks and new bikes), and the extra cash from objectives when you have a worse score, overall, than the other racers (Who, in true EXTREME SPORTS fashion, have names like Black Devil or Red WhiskyBreath… Okay, the last one’s not real, but the first one is, and you get the idea.) 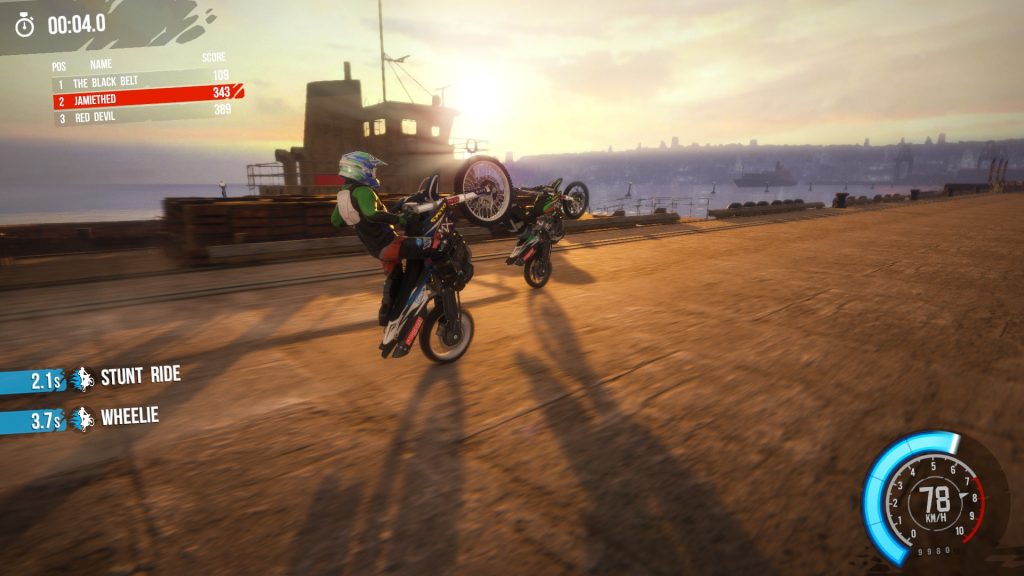 I will get first in this race, despite having the lowest score. Because it’s drag, and so the points don’t matter. Only objectives.

And, in the end, that’s largely what can be said about MX Nitro: It’s moderately fun, especially if you like that sort of thing, and, once you get the hang of ABB, ABW, and ABT, the unlocks, occasional crashes (Of the bike kind, not the game kind, the game’s stable), then you start having fun. It’s not for everybody, even among EXTREME SPORTS fans, but since individual races are relatively short, the unlocks are pretty reasonable (Yes, even the fact that tricks unlock), and restarting a race is pretty simple too, it can be summed up as “Good arcade fun, even if it doesn’t really stand out from anything else.”

The Mad Welshman always stands on one leg when walking, just to make things interesting. He also kicks off walls and hops really fast. Is he not EXTREME?