Into The Breach (Review)

Minor paraphrasing aside, Into the Breach sums up, in its own title, how I’ve felt while reviewing it. Once more, unto the breach, dear friends! ONCE! MORE! I’m less enthused about the part where I close up the walls with the English dead, but that’s mainly because I don’t have all that many to close the walls with, and I’m pretty sure most of my mech pilots aren’t English to begin with… 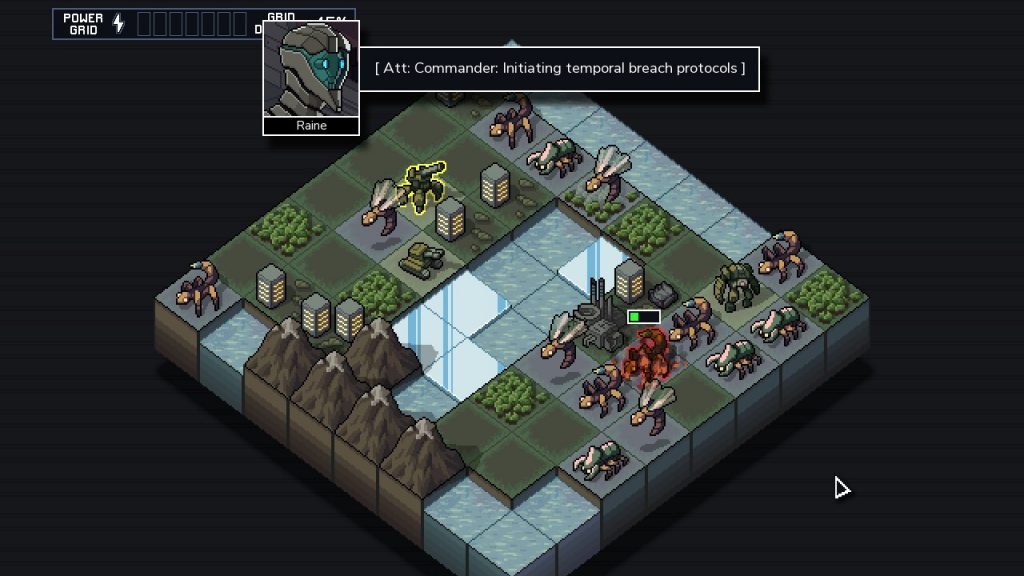 OOPS. Welp, back to the time machine, folks!

…Still, Into the Breach is Subset games’ latest foray into their particular brand of tight, replay dependent strategy, in which three mech pilots (One of which, at any given time, is a traveller from a future where things went horribly wrong) try to hold back an insectile menace, mostly without backup. It’s turn based, and with the clever gimmick that, due to time travelling shenanigans, you already know what your enemy is going to do. Well, to a certain extent. You know what they’re shooting at (and are capable of), and you can take advantage of this to, for example, shove one of them with artillery or a punch in such a way that they actually hit their bugfriends this time around.

As such, it’s a highly tactical game with a lot of depth, which you might not realise looking at screenshots, as every mission is an 8×8 map. On its most basic level, there’s always at least as many of them as you (unless you’re super good), so simply doing damage isn’t enough. In fact, at least some of the time, you’re merely going to be concentrating on avoiding housing damage, as, with enough loss of life, that’s it, the Vek have reached critical mass, time to bug out and maybe find a timeline where you did better (taking one pilot with you.) But then, it adds layers. Pushing and pulling enemies as well as hitting them. Status effects. Synergies. Environmental considerations. 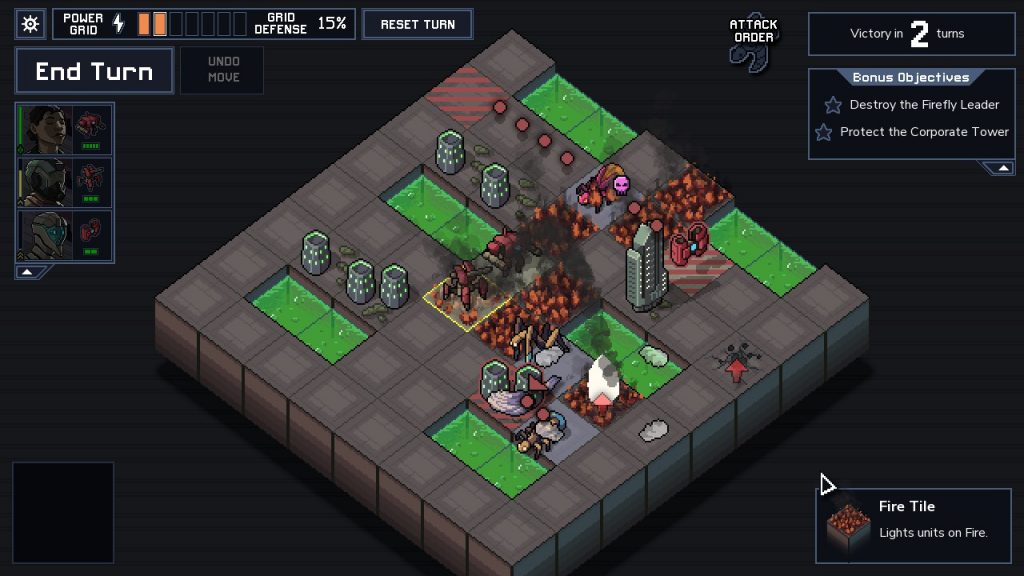 Ahhh, nothing like saving the day by setting things on fire, and then shoving things *into* fire. Or acid. Hell, just plain water does well sometimes too!

Since explaining everything would most likely be rather dull, let me focus on a team that I never thought I’d like… And yet, they consistently get closer to victory than any of my other mech groups. Heck, even their name (The Rusting Hulks) and their price to unlock (a measly 2 coins) doesn’t exactly inspire confidence. The fact that one of their units doesn’t even hurt enemies seems, at very first glance, like the waste of a unit. But this is where it gets fun. Because, you see, the other two units drop smoke. Smoke which, to them and them alone, also electrocutes enemies at the beginning of their turn, on top of what smoke normally does in this game: Stop you being able to attack if you’re in it.

This may not seem useful, but consider this: An enemy not attacking, and taking damage, is a net plus. An enemy that can’t fly shoved into water, or two enemies with 1 HP being shoved into each other with violent gravitic force is not only a plus, it’s being classy as hell. I don’t need powerful beam weaponry, giant fists, or superscience shenanigans. I have smoke and mirrors. What with the different teams each having an interesting style of play, the ability to play with random mechs, and the ability to pick and choose teams, with achievements (and thus further team unlocks) for experimenting? Now that’s what I call encouraging replay and diversity of play, friends…

It hasn’t taken me terribly long to get to the point where things have slowed down a little (A straight night of play has earned me all of the islands, most of the pilots, and some of the teams, with two almost wins) , but, even with everything unlocked, I see the potential here for me coming back. What if I have an all-shoving team? Or having to watch my collateral with highly damaging beam weaponry? Hrm. Hrrrrrrrm! 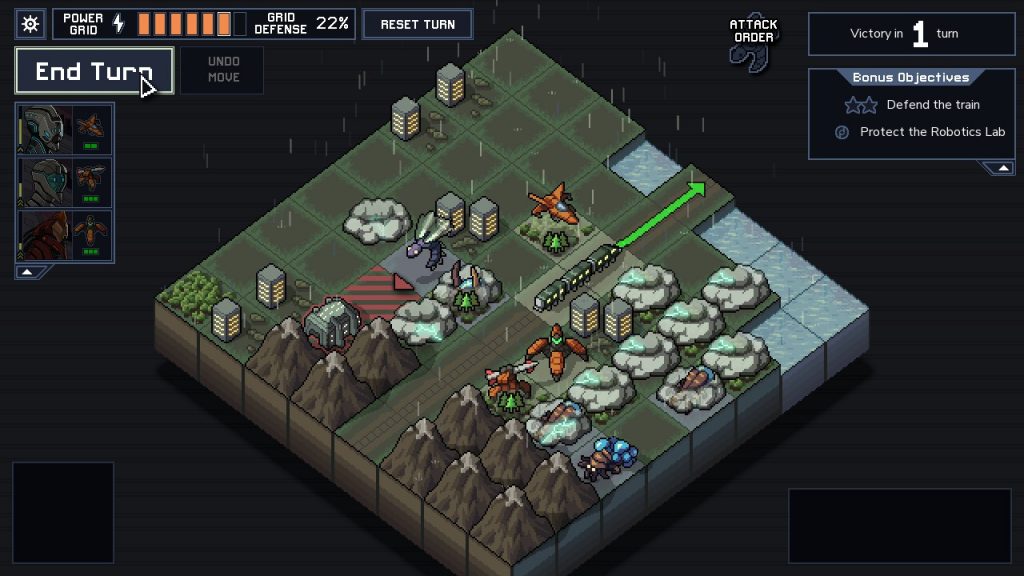 Smoke and mirrors. Okay, and riding the lightning too, but let’s not go overboard here!
…Okay, let’s go overboard.

It helps that the music is tense, fitting, and atmospheric, the sound solid, the visual aesthetic similarly tight and consistent, and, best of all, it tutorialises fairly well, and is pretty clear. I would consider this a pretty strong purchase for strategy fans, and another fine example to add to my collection of designing clearly and tightly to goals. Props.

Burninate the towns… Burninate… Oh, wait, no, that’s the opposite of what The Mad Welshman is meant to be doing! Sorrrreeeee!