Source: Cashmoneys
Price: £6.99
Where To Get It: Steam , Developer Page

Thank the Space Lords for the pause button. Without this godly power, I would probably be quite, quite dead. As it is, there’s several blank spots in my memory, with only the word “Dammit, reload” coming to mind when I think of them. But enough about my life, let’s talk Interstellaria, by Coldrice, with music by Chipzel, and published by Chucklefish. 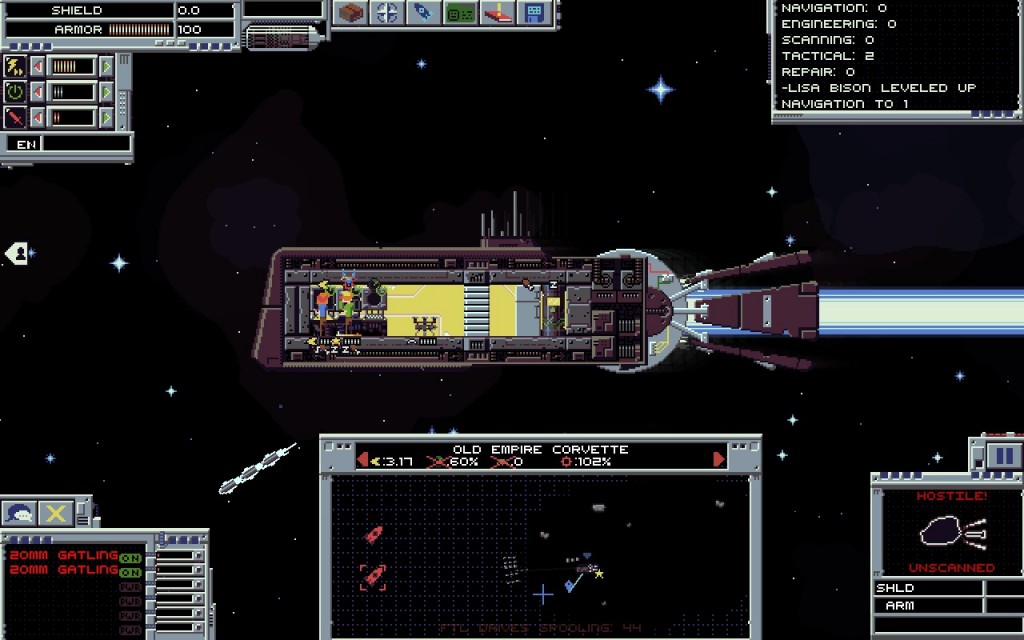 My brave starter crew, unfazed by the fact they’re shooting blindly at things in space.

Interstellaria is a space trading, adventuring, and universe saving game involving crew and fleet management, exploring new worlds, and, if you follow the main plotline, saving the known universe from blob-like aliens who are mysteriously abducting entire worlds for… Reasons. It’s a game with wit, where your glorious career starts with you being ejected from your home by your room-mate for being a useless sponger, and where Humans are the most beautiful (and nigh useless) species in the universe. But if it weren’t for that pause button, the game would be unplayable. As it is, I recommend something the very moment you start the game, and at every point where something happens… Pause. It’s the space bar to do that. Without that, you will probably not see all the hotkeys. And you will want those hotkeys. Either that, or frequent use of that pause button. Because the game will not forgive you for not learning them.

Now, this may give the impression the game isn’t friendly. In a sense, it actually is: The function of things is either clearly explained as they come up, or quickly accessible via one of the subscreens like Inventory or Fleet Management, and the game isn’t slow to tutorialise. In another sense, parts of that tutorial UI interfere with your crew selection “quick” bar, the hotkeys for crew selection need you to remember what order you picked up your crew in, and… Look, it’s not the friendliest of UIs, even after hotkeys, so use that pause regularly, alright? 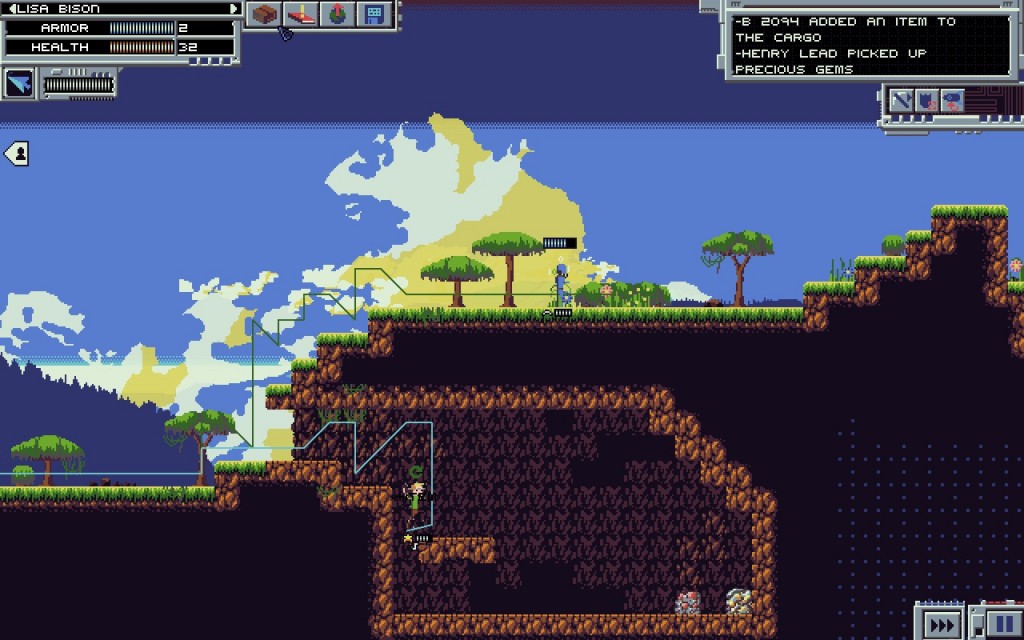 Looting a planet once it’s safe is… Ennnnhhhh…

Honestly, Interstellaria is a bit of a mixed bag overall. The tunes by Chipzel are pretty awesome, especially in space battles, but the pumping chiptunes and EDM feel less fitting when, say, you’re on a station selling the junk you’ve looted, or looting a planet. Speaking of looting a planet, it’s got to be my least favourite activity in this game, which is a shame because it’s pretty central to progressing. Basically, you make sure the area’s safe (By killing everything hostile beforehand), hit H(arvest), then F(ast Forward), and… watch them go to it.

In fact… This is, I think, the core of why I’m not enjoying Interstellaria perhaps as much as I could be… Combat, salvaging, space battles… They feel like busywork, and a fair bit of my time is spent in either tasks that don’t take much attention (like salvaging), fights which don’t seem to take much of my attention (ground combat), or fights which mostly don’t take much of my attention, except for when things go wrong, in which case I end up losing track of what the hell’s going on… That would be the space battles, where damage can lead to all your stations damaged, leaving you defenseless, immobile, and blind until you not only repair the damage, but also get your crew back on station. That last bit can be confusing, because it’s not completely clear, until you try to do something, that the station isn’t manned (navigation is the worst for this, while Scanning is the obvious exception). Efforts have been made in recent patches to fix this (Automatic crew assignments, for example), but I think it’s still got a way to go. 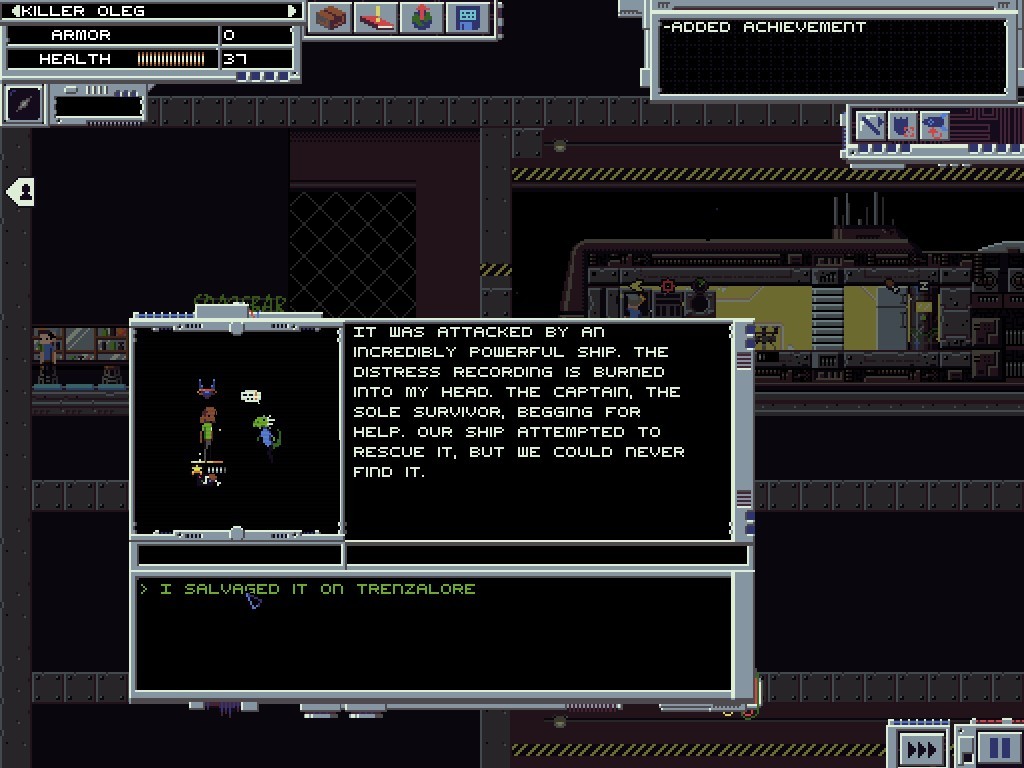 And I feel slightly guilty for not enjoying this so much, because it’s a genre right up my alley, the only real obtuseness is in the UI and space combat, and there’s some interesting quirks and awesome things, like the variety of races and encounters… For example, Robots (Can’t carry weapons or armour, but don’t need food or sleep), an amusing parody of Captain Kirk from Star Trek (Who seeks out potentially beautiful new civilisations, hopefully with smoochable folks, and diplomatically has big guns), and, of course, the strange energy beings encountered in the first proper plot mission.

So overall, visually, the aesthetic is tight and interesting. Musically, it misses the mood mark, but is awesome on its own (And, indeed, can be purchased separately), and gameplay wise… Well, if you think you won’t mind the slight tedium of salvaging, I’d say give it a go. But it’s definitely not for the impatient, or skippers of tutorials.

The Mad Welshman felt slightly hollow as he opened another crate full of in-demand scrap. He knew there was something more out there… Perhaps a beautiful alien with a bee-hive hairdo asking “Show me some more of this Earth thing called Kissing.”