Source: Cashmoneys
Price: £24.99 (Assorted team unlock DLC totalling around £6)
Where To Get It: Steam
Other Reviews: Early Access, Early Access 2

GRIP, spiritual successor to Rollcage and future racing game about cars that work equally well (or poorly) both ways up, remains a game where when it goes well, it goes very well, and when it goes poorly, you say rude words and hit the “RESTART” button. It also remains a game where the line between the two can be quite thin. As thin as a single ramp, or some inconsiderate driver you’ve just shot with a gatling deciding to get in your way after several high caliber reminders not to. Pictured: Poor combat-racer etiquette, as demonstrated by a robot.

You’d think they’d learn after the fifth missile for getting ahead of me in a row. But such is life in the world of GRIP. C’est la guerre, as they say.

The thing with GRIP is that, although it’s undeniably cool, it is also harder and a little less accessible than other Future Racers. Breakneck speed, combined with the ability to launch yourself into the air, combined with less than stellar track signposting and some nasty corners… This is before we get into things like the entire HUD going screwy when you’re heavily damaged, or the less than friendly multiplayer interface (and odd segregation of race types.)

Does that, necessarily, make it bad? Well, no. It’s aiming for barely controlled chaos, and it gets barely controlled chaos. It’s also one of the first future racers where I felt obligated to use the brakes. And, to its credit, it does mention the difficulty of the tracks, and it’s not joking when it says “Hard.” To take one example, the aptly named Acrophobia (A mountain track set above some deadly drops) finishes with perhaps the nastiest brake trick I’ve seen, a leap from one track to another vertically opposite, then… Ah, then, if you don’t immediately slow down, you’ll careen off the side of a 90 degree hard turn, rather than quickly braking (or at least, taking your finger off accelerate) dropping from the second track, slowed down, but able to take that sharply angled corner. That one caught me out more times than I care to count. 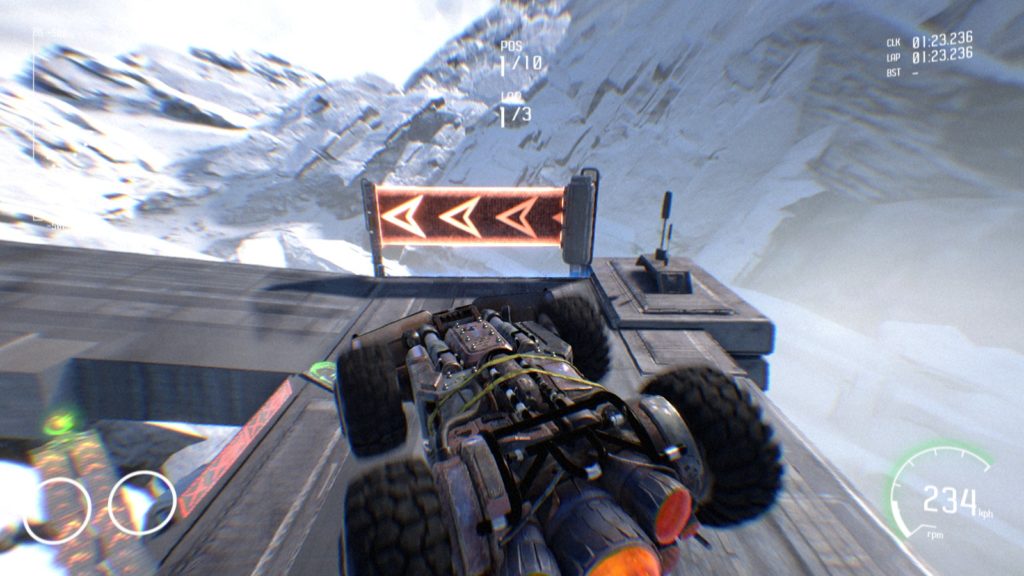 I can’t deny, however, that it looks *awesome* when you pull it off.

On the plus side, beyond the track design, and the usual Future Racer tricks (Such as only hitting the accelerator on “GO!” to get a boost-start… Itself mainly useful if you don’t have a conga line of racers in front to ruin said boost), difficulty can be set in a moderately granular fashion. Don’t like blowing up mid-race? GRIP feels you, and lets you turn that option off. Want packs to be more cohesive, and to never feel truly safe in a race? Rubber-banding can be turned on and off. Don’t like Blue Shells (the Hunter missile)? You can turn that off in pickups. Well, in single player and online, anyway. In Campaign, the rules are mostly set.

Speaking of weapons, the game seems to be at its best when it’s sticking to traditional models. There, any flaws in the bots seem more natural. In Arena mode, for example, I never really felt challenged by the bots, only by other players, while in Ultimate race mode (which adds a stunt and combat scoring mechanism, as well as racing points), it felt like the more cohesive the pack was, the harder the time I had racking up those points. After all, you don’t get points for fucking up and losing seven places… Speaking of… A reset remains punishing in most cases, so occasionally, there’s the frustration of a second placer knocking you off the track (or going off the track due to a moment’s inattention), and… All of a sudden, you’ve lost several places, and, if this is anything after the 2nd lap, good luck clawing your place back. Combat is nearly all frontal, with some clever exceptions like the EMP field (also known as “Punish anyone coming close”) and the time slow powerup (Which slows everyone except you… Normally quite powerful, it can, however, aid some players through the more difficult sections, which makes it a bit of a gamble. But a clever one, as some distance is always gained.) 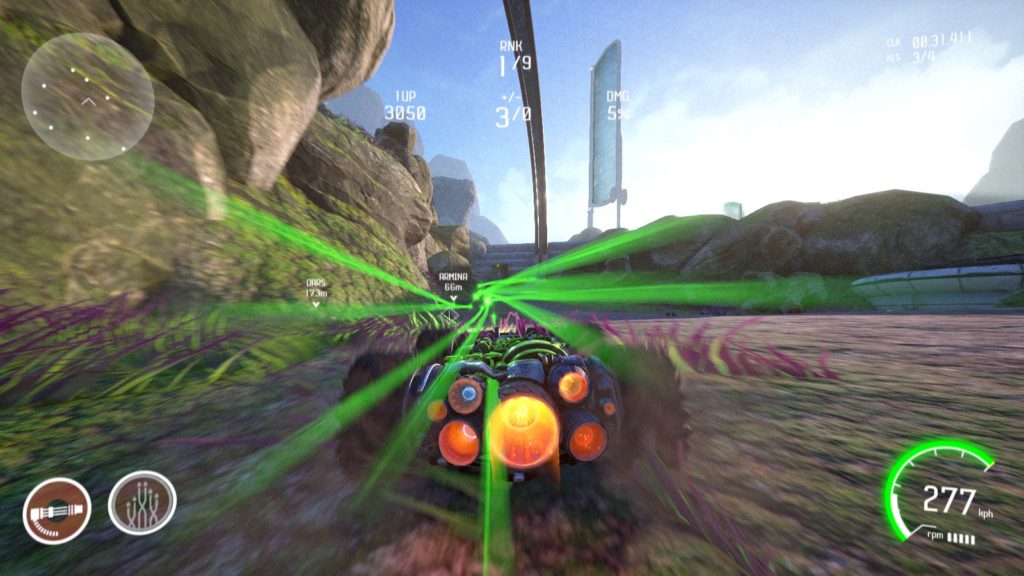 The Hydra Missile. Poor lock-on range, situational… Still like it because it’s a swarm missile.

Overall, GRIP is something I personally enjoy, while acknowledging it’s a bit of a mixed bag. The menu accessibility varies, the track signposting is iffy, the tracks can get hard pretty quick. But the powerups are pretty balanced, the granular difficulty is a good choice, the music and visuals overall are pretty, and the feeling of big, chunky jet-propelled cars careening around their chosen track or arena is pretty good, right up until it suddenly feels a bit frustrating. Probably not best for first time future racers, but at least alright overall.

The Mad Welshman will always, when customisation options are available, go for the most garish car imaginable. It’s basically like using missiles, but for the eyes.