Source: Cashmoneys
Price: £10.99
Where To Get It: Steam
Other Reviews: Early Access

The satirical computer board game of being a capitalist douchebag (and Gremlin) released earlier this week, and I finally got a chance to properly give the multiplayer a go. As it turns out, I’m an evil, evil man. But you knew that already. So let’s talk about the game. 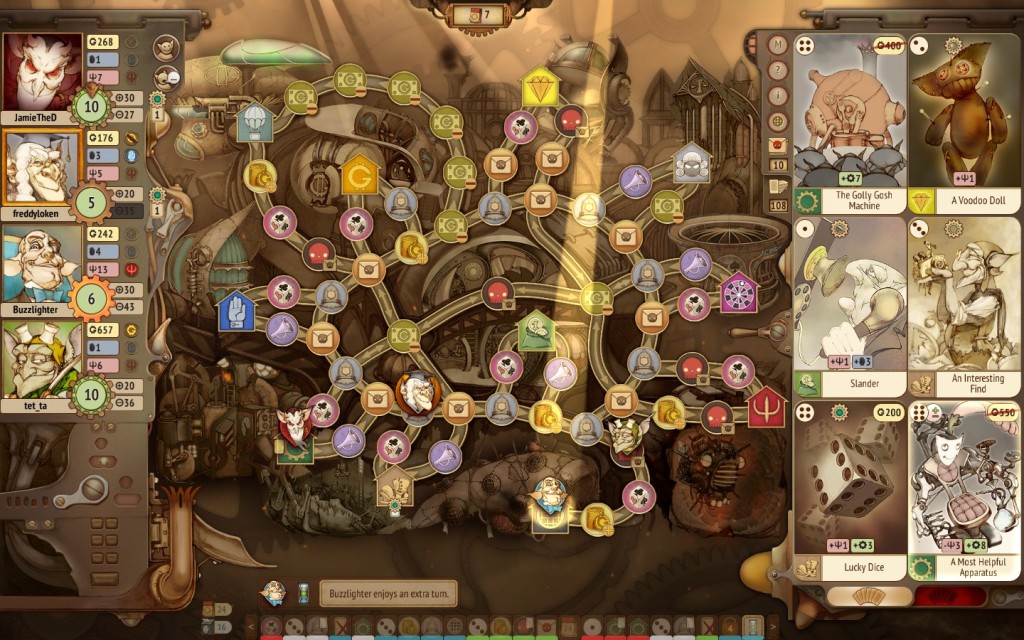 Ahahahaa… I’m going to win, and they can’t stop me. Well… Maybe…

Gremlins Inc, essentially, is a tactical race for points, where the cards you use don’t only affect other players and give you points, they’re also the way you move. As such, you have to change your plans on the fly quite often, as while you could try holding on to that lovely card with all the victory points, you might need to get to a more immediate reward in a hurry… You know, before others do to you what you would do unto them. Despite being competitive as all heck, ranked multiplayer seems pretty relaxing, although due to one of the reasons it’s relaxing (Chat is mostly just emoticons and some stock phrases), it can be hard to tell sometimes.

Either way, playing against players is a very different experience than playing against the AI. Because the players are less likely to dick you over. Which segues nicely into one of the “problems” of Gremlins Inc. : Challenge mode is tough, because the AI is good. Or, more accurately, because the AI is aggressive. I have yet to gain three lamps in any of the challenges, despite them mostly being longer games than ranked. Because the AI players take every chance they get to dick you over if it looks like you’re winning. 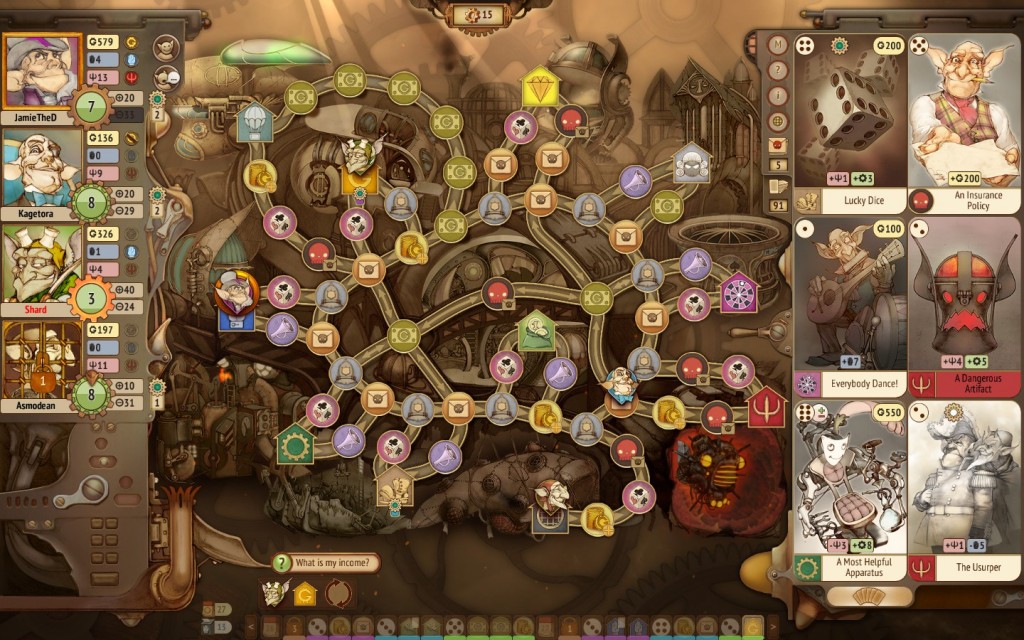 Some cards are secret, or illegal. They’re useful, and powerful… But exposure of your plans is dangerous, and can come at any time.

In a way, though, this is still revealing, because it shows how the entire game is built around threat perception. And there are lots of threats to perceive, from a player having lots of money (Used to buy cards, especially ones that give you those sweet, sweet victory points), lots of votes (Meaning they’re going to become governor, get a victory point, and become immune to bribe or police search tiles, letting them keep their money in places you wouldn’t want them to), lots of EEEEEVIL (An indicator of how many “selfish” cards they’ve played, such as Robbery… 350 easy money, but also lowers everyone’s income), and even the not often seen Prison Experience (Which establishes how much of a threat they can be if you’re in the Jail with them.) The computer is good at establishing this, whereas in multiplayer? It’s much less certain. You could slip by unnoticed for many turns, not considered a threat until BAM, one Infernal Machine and an instant jump to the top of the board. Or, of course, you could be heading toward the Astral Plane, somebody will say “Aha, they are about to play a good card” , and slap you down for your hubris.

I haven’t had this much fun playing ranked since Bad Company 2. And the game is cunning in that your rank slowly goes down for each day you don’t play, allowing newer players a chance to climb the ladder when others get tired of playing. The game also tries to keep the interactions friendly by limiting them, and it seems as though that’s working. Seems. It’s kind of difficult to tell, but I’m pretty sure most people are being friendly, gasping at others’ misfortune, asking if they’re alright, and cheering each other on as somebody makes a canny play. 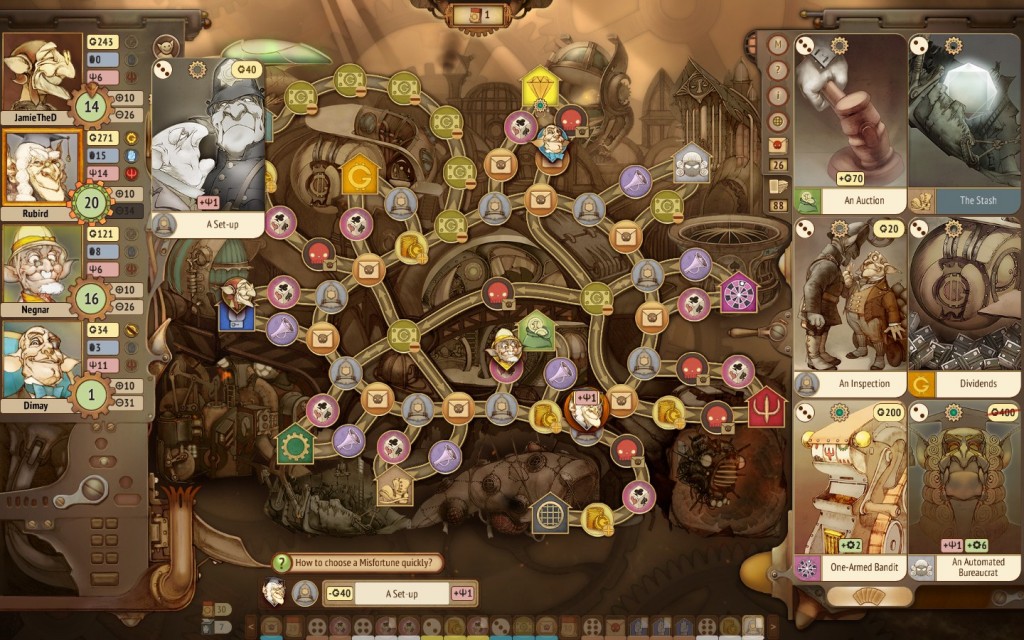 I’m not going to pretend everything’s happy, however. Sometimes, someone puts the boot in when you’re already down… :'(

Overall, this is a tightly designed computer board game whose main flaw is the same flaw of any board game… Once you become familiar enough with it, the entertainment lessens. But nonetheless, I’d recommend it as a good example of computer board games, and a game at a reasonable price.

The Mad Welshman smiled as the gremlins told him he’d be “Right at home in Clockwork Town.” As another failed experiment due to lax safety measures (They cost money, after all!) exploded, he smiled. Yes… He was… Home.