Source: Cashmoneys
Price: £3.99
Where To Get It: Steam
Version: 0.10
Other Reviews: Release

With Golden Krone Hotel, we’re looking, once more, at a turn based hack with transformation as a core gimmick. Earlier this week, we took a look at Midboss, a game with similar themes, but the difference between these two games couldn’t be more stark than night and day. Which is fitting, considering the transformations in Golden Krone Hotel. 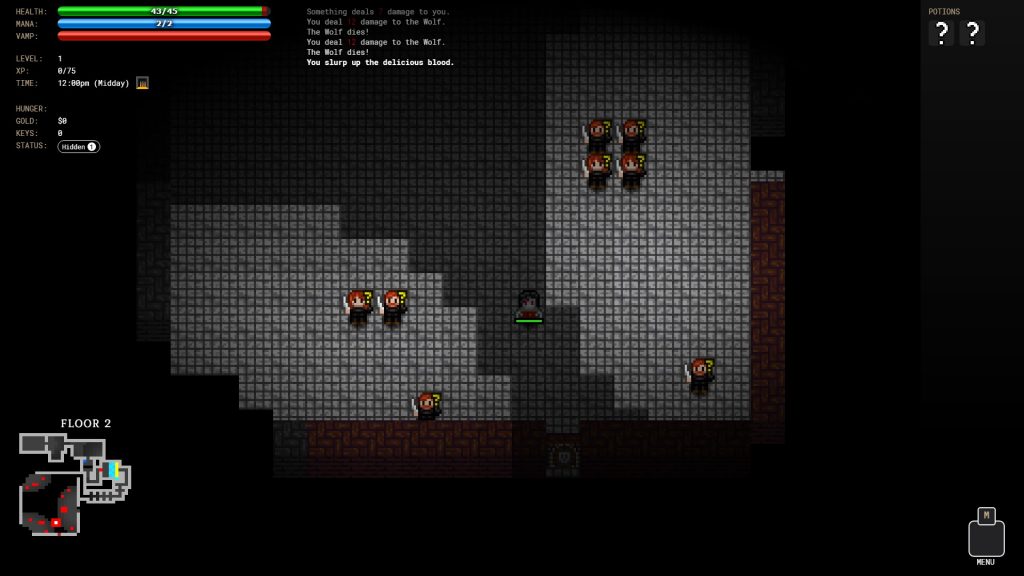 Hahaha, stupid humans can’t see in the dark (The game has, as of 0.10, a tutorial. It plays once, and gives you the absolute essentials quickly and efficiently)

The general idea is that you are a General, who is also an assassin, and you are infilitrating the Golden Krone Hotel, owned by a Vampire called Fane. Vampires and Humans uneasily co-exist here, and as such, you’re going to get into a fight whether you’re a vampire, a human, or, worst case scenario, a Werewolf, who nobody likes when they’re obviously being a Werewolf. So form, in this game, truly matters, and it matters in a number of ways. Vampires, for example, don’t read (No, don’t ask why, although I’ll be coming back to this), get damaged by sunlight and fire, but can see in the dark. Humans, on the other hand, can improve themselves, read, but can’t see in the dark and have to eat to survive. Werewolves are basically humans, but become murderbeasts in the full moon. And, depending on whether you’re a vampire or a human, vampires or humans will talk to you, telling you things.

In a way this, along with the narrative framing, are the weakest portions of the game. There’s not a lot folks have to say, except to remind you that General Arobase has a serious grudge against Fane, and couldn’t possibly be here (They’re a master of disguise, we couldn’t possibly be General Arobase!), and the roles of various human or vampire enemies. So if you’re playing for rich lore, or a deep story, look elsewhere, this isn’t exactly Bard material, and bits of it fall apart under scrutiny (Vampires not being able to read is purely a mechanical conceit, and not supported, as far as I can tell, anywhere narratively.) 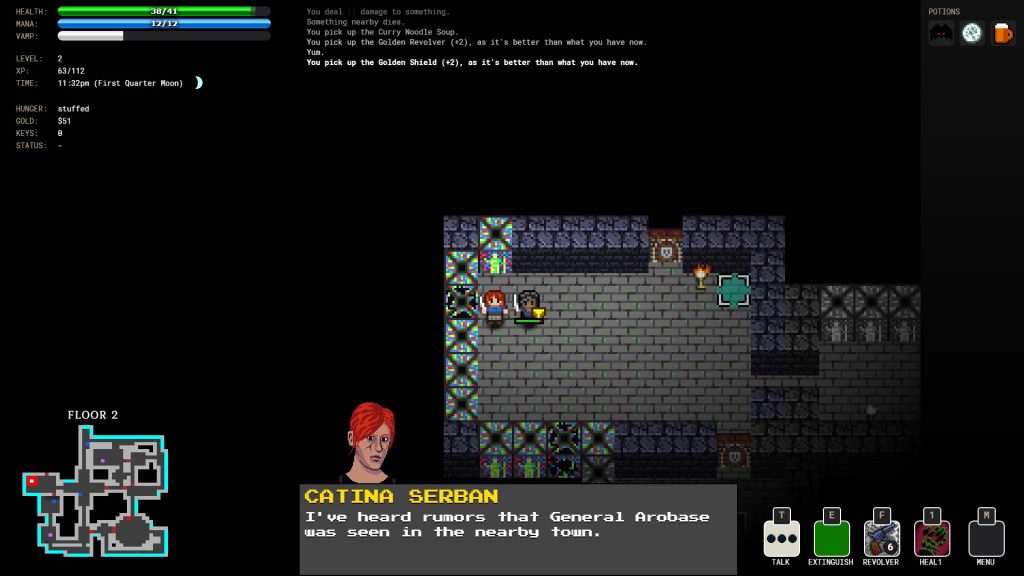 “I hear this General Assassin who’s good at disguise is here, but you couldn’t *possibly* be them!”
Ha. Ha ha ha ha. Haaaaa.

But mechanically, the game is both strong and simple. Movement is in four directions, everything moves when you do, and you know exactly what to expect. Playing as a vampire, you can heal by licking up blood, and as a human, you can eat, heal if you have the skill, cast spells, and fire a revolver (With limited ammo.) What makes the game interesting, however, is that just because you start as a human or a vampire or a werewolf, doesn’t mean you have to stay that way, because some potions… Change you. And others will affect you differently depending on what form you’re in.

Demon’s blood, for example, will turn you into a vampire temporarily, but will also buff you if you are a vampire, while Luna potions will turn you into a werewolf, again, temporarily. And enemies will change their reactions accordingly. So, playing as a vampire, if you want access to spells, you drink a specific kind of potion, and bam, all those books you picked up are suddenly read, you have skills, you have extra stats (Which last beyond that human transformation), and you can read what lore there is, without having to worry about spellcasting humans. There’s also a fair amount of “neutral” enemies, who’ll try to kill you no matter what, from the get go. So there’s difference, and there’s interest, and everything is accessible and clear. Even the usual equipment problem is abstracted: Better equipment is kept, adding its bonus to your defense, melee, or revolver attack, and worse equipment is added to your score, measured in gold. 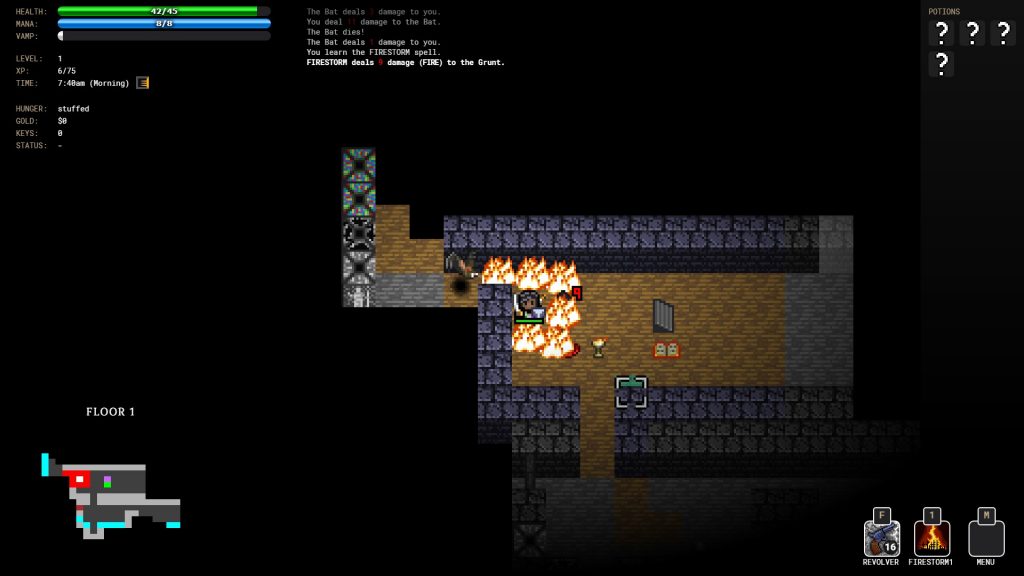 Just like Midboss, reviewed earlier this month, you attack enemies by walking into them or casting spells, and numbers happen. The spells, however, are more dynamic, and there’s more to do with the environment.

As such, if you’re looking for an entry level game to let you know what the fuss is with all these roguelikes, roguelites, roguelikelikelikesortas, and whosamaroguesits, Golden Krone Hotel is definitely not a bad start. It’s pretty colourblind friendly, clear in its concepts from the get go, and, being turn based, it doesn’t require manual dexterity or good reflexes to play. Its not the prettiest game out there, the music and sounds are okay at best, “meh” at worst, and you’re probably not playing it for the rich lore, but I would recommend this to both roguelike fans and people looking to understand what the fuss is about.

The Mad Welshman, alas, is not a master of disguise. Although he does enjoy throwing his disguise aside and cackling wildly. Perhaps that’s part of why…