Goodness me, that rhymed. Lovely. Well, anyway, once again, it’s time to set the Wayback Machine, and the interesting game for this outing to the groggy times of yore is Dungeon Hack, the only official, licensed Dungeons and Dragons roguelike. Which is highly amusing when you consider how much early roguelikes (And even some modern ones) have been influenced by 2nd Edition DnD.

Dungeon Hack, released just after another title I’ve briefly dealt with, Dark Sun: Shattered Lands, uses an interface very similar to the Eye of the Beholder games. Similar enough, in fact, that I’m halfway convinced it’s the same engine, despite being developed by Dreamforge (Who, like SSI, created strategy and roleplaying titles, and did not survive 2001.) Nonetheless, it’s not the engine, so much as the visual style that impresses. There are several different level themes, all of them have a variety of different locks, tapestries, paintings, and gewgaws, and, if it weren’t for the rest of it, I would say that every run is a refreshing and different experience. 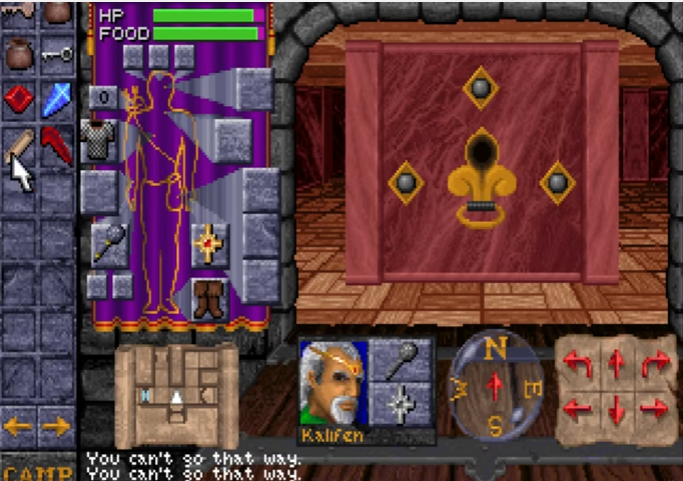 One of something like… An absolutely *silly* number of potential locks.

Unfortunately, I’m not saying that. Every run is, in fact, a tedious nightmare that often ends on dungeon level 2, due to the mechanical aspects of the design. Procedural generation has come a long way since the days of rogue, ADOM, and the like, and Dungeon Hack shows one of the weaknesses of early experiments… It’s predictable, and the difficulty curve is not so much a slope as one of the cyclopean steps of Great Cthulhu’s abode. As is often the case with roguelikes, there is a single, playable character.

But many of the monsters in AD&D are, in fact, balanced around groups taking them on. A perfect example of this is the main monstrous feature of the second dungeon level: The humble Ghoul. The Ghoul is normally a cowardly eater of the dead, picking on things it thinks it can eat, and making corpses when… Well, the corpses it normally feeds on are scarce. To aid it, it has a paralytic venom in its claws and fangs. Now, to be perfectly fair to the developers of Dungeon Hack, unlike in Eye of the Beholder, when your character is paralysed, they can still move (but not attack or use items), whereas if a mass paralyse from a Beholder hit in EoB 1’s later levels, you were pretty much dead.

The problem arises, then, from the fact that it’s corridors… And rooms. And corridors predominate. Corridors in which the other monster type that always inhabits the second level, the Troglodyte (in 2E, a stronger, but less intelligent relative of the lizardman) are very likely to ambush someone who hasn’t cleared the way behind them, and, even then, may get surprised by a respawn. As a Mage, you may just about have fireball at this point (Requiring a rest after every cast to regain it… We’ll come back to resting), as a warrior, you don’t really have any recourse except that old first person RPG technique of the sideways shuffle (Exploiting the AI in… Er… A room… To, er…Well, crap, that sort of invalidates it in a large set of situations, doesn’t it?), and it’s only as a Priest that you get… Turn Undead. Which, on the one hand, you have an infinite supply of. On the other, it’s not guaranteed to work, and you’re not guaranteed to hit on the attack that will break the Ghoul out of its “OhGodsAHolySymbolRunRunRun” mode Turn Undead tends to put it in. 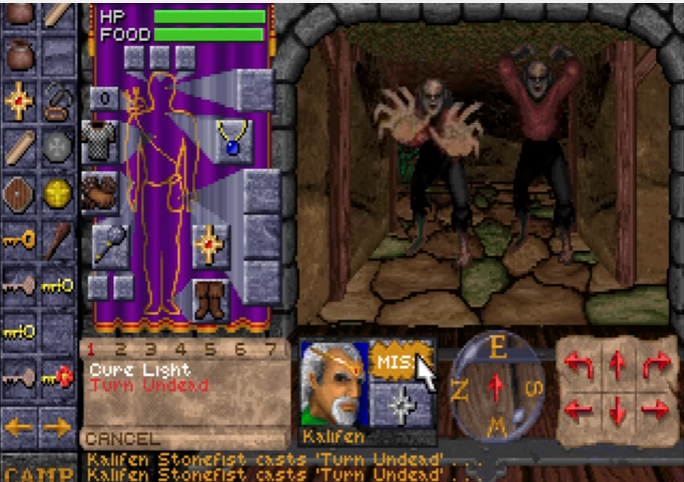 Ghouls. There are many words I have to say about a lone adventurer fighting even small groups of ghouls. The vast majority of it is unprintable, even here.

And then, there are the keys. I mentioned before that there are a variety of different locks, and hoo boy, does the game use as many as it can. Each locked door has a specific key type. I’ve never encountered a situation where the key was behind a door, but each level becomes a case of three things: A sweep and clear, not unlike those annoying missions in Hero Quest and Space Crusade (Remember those?) where the victory condition was “Kill everything”; A hunt for various keys (Ice keys, flower keys, gold keys, chrome keys, platinum keys, bone keys, missing bull horns… The list is quite large); And, another staple of first person games and DnD RPGs of the time, either being a Dwarf, able to sense secret doors, or looking at the map, noticing large empty spaces, and wondering which of the walls you’re going to try and walk into will, in fact, turn out to be illusory.

Fun! It’s interesting to look at a game like this, because it has a lavish (if overacted) introductory cutscene (Involving the sorceress/demigod/secret deity… I forget which… Who sends you on the quest, and Sir Not Appearing In This Game, possibly the biggest, dumbest adventurer I’ve seen since Lands of Lore’s Conrad “The Scones Are Still Intact” McAdventurerson), a lot of thought put into a lot of locks and tapestries and statuary and fun things that mostly don’t have any bearing beyond looking pretty (Which I approve of), and yet… Once you get past that, there’s almost no balance, a steep difficulty spike on the 2nd level, and even less context than Angband or Nethack, relative contemporaries (1990 and 1987-2015.) 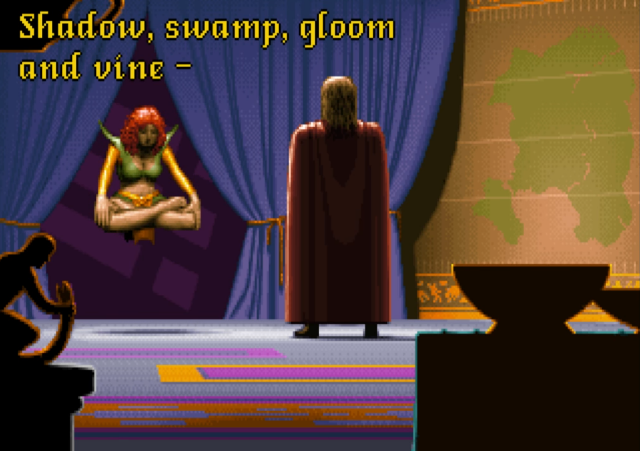 …I smell a cutscene, VO so fine!

Would I recommend playing it for enjoyment? Oh, Mystra, no! Would I, however, encourage budding developers to look at it critically? If you’re into procgen, licensed RPGs, and step/tile-based first person RPGs, yes. Because it is, to me, interesting to examine. Even if the examination can be… Rather painful.

I’ll get you, Ghouls. And your little frogs, too…