The original Frozen Synapse, released in 2011, gave me a new appreciation for AI. A few simple roles, a few simple actions, and a constricted battlefield nonetheless gave appreciation for timing, cones of vision, and action priority, because the core conceit of the game, whether against AI or players, is that turns happen simultaneously, and so, you have to not only think what you’re doing, but also what the other person’s doing. 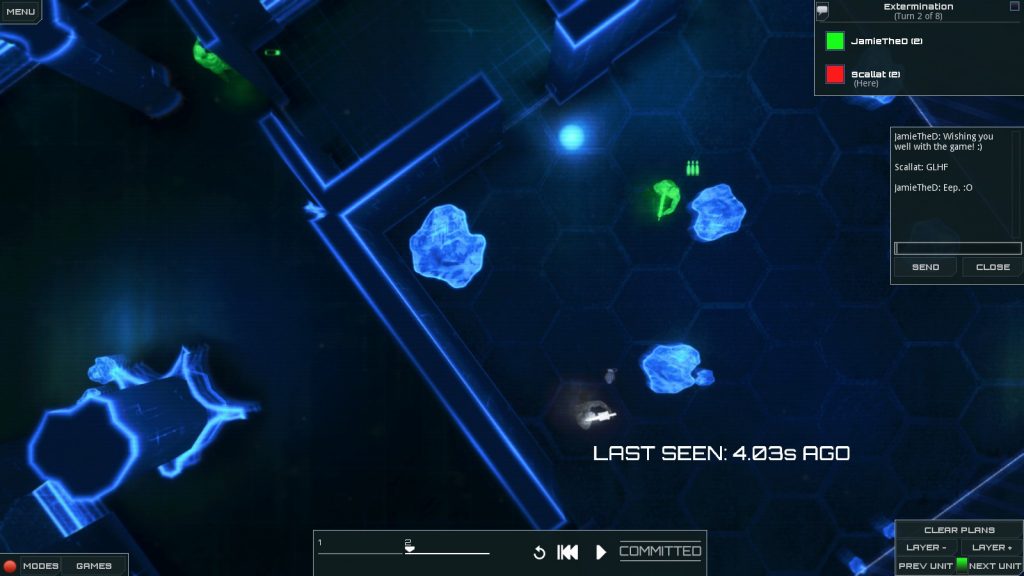 A fine example of understanding timing from this multiplayer match… Nothing I do will save this assault, because the grenade is perfectly timed.

Okay, so you have to do that anyway in games, but seeing it, explicitly playing out on a map, and understanding both your mistakes and those of your opponents makes clear just how big that phase space of actions could get. It was scary, but thankfully, the community was pretty chill.

Now, after that, a similar concept with Frozen Cortex (Only robot sportsball instead of corporate murderclones with guns), and a few years, Frozen Synapse 2 has come to deliver… Well, more of that. And it brings two somewhat different experiences, depending on whether you tackle the City Mode, singleplayer, or Multiplayer. Let’s deal with multiplayer first, because it’s the simpler of the two, in a sense.

Four players, in two teams, given one of several random, single weapon loadouts. While there are other multiplayer modes, the most common is that, as mentioned, turns are simultaneous, and you don’t know what a player’s doing unless the opponent is in your vision arc. A good example from my multiplayer matches (Where I have consistently been defeated so far) was where a grenadier, unbeknownst to me, was right behind my assault that turn, and slipped into a doorway to grenade one of my folks from where I least expected it.

It was a clever play, because even if they had been seen because my Assault (automatic rifle) had seen them, they would still probably have escaped before I could shoot them, due to the fact that Grenadiers always run when they’re not throwing grenades, but Assaults track slowly when they’re moving, and are at their best when they know roughly where to aim. There are inequalities, built into the classes (Knife, Pistol, Assault, Shotgun, Grenadier, Rocketeer, Flamethrower) that add tactical considerations. Grenades take time to throw, and won’t move until they do, but their explosions last longer than a rocket (Not much longer, but enough that I painfully learned that Grenadiers can run into their own grenades, after the explosion started), Rocketeers blow up all the landscape in the rocket’s AoE, which can work against as much as for, and everything takes time.

A lot of this would already be known to Frozen Synapse players, new roles aside, but the addition of focus fire makes for a new priority to memorise, and a new wrinkle.

Moving quickly means it’s harder to hit you, but you can’t fire. Moving normally means you fire, but you have a penalty aiming. Stopping when you see someone means you shoot quickly, but are a sitting duck. But whoever correctly predicts the small, diamond shape location where an enemy is going to be when they fire, they get an accuracy boost. So, for example, somebody covering a door, from a far corner, may well get the drop on somebody who knows damn well the door’s their only exit, but foolishly stands in the doorway. 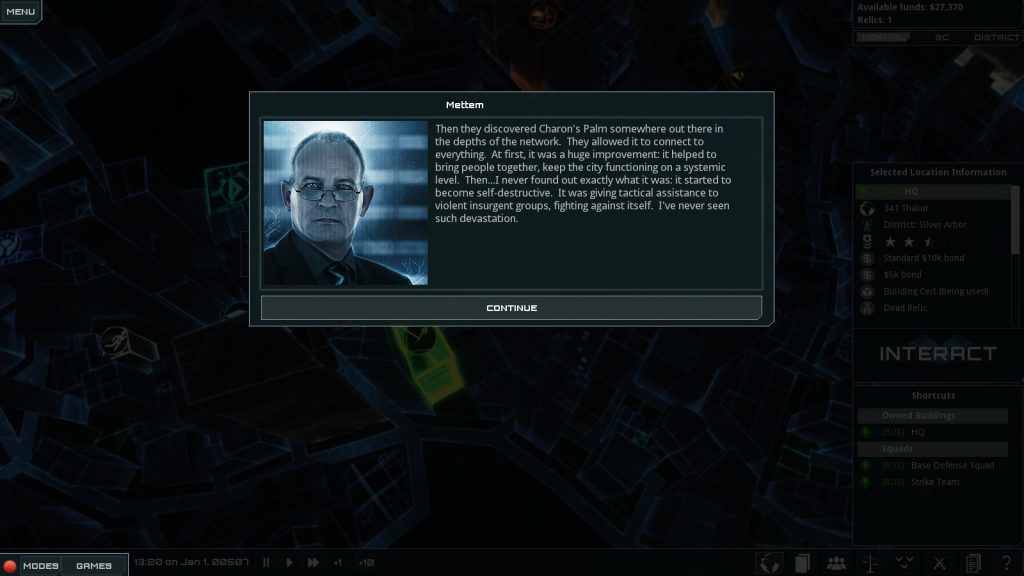 The story of Frozen Synapse continues, as this city is essentially built on the rubble of the first game’s story mode.

So it’s tactically intricate, simple rules making for an intriguing tactical game where you’re seeking a maximum area of action, while attempting to contract the opponent’s choices. I almost won one match from near death, due to the last person being a grenadier, who can quickly deny large areas without having to destroy their cover. Alas, they had a grenadier too, and, on the 9th turn of 8, it was declared a draw.

City Mode, on the other hand, is more complex. Not only are there the same tactical considerations, there’s management aspects to it too, such as building permits, a mercenary market, diplomacy… And it doesn’t exactly tutorialise well. Case in point: Grenades are great. Grenades are useful. But you can’t use Grenades unless you’ve signed up for Explosive Ordnance Services in the City. Or rockets. And the first I knew of this was when I’d already sent a Grenadier along with my squad to help clear out some Raiders. All the great aesthetics, the huge map, the soulful music that plays, isn’t going to save single player mode from some heavy flak for bad explanation of complex systems… Or, overall, the fact that accessibility options for the small text are currently nonexistent (There was, apparently, a “4K Supporting GUI” patch over the weekend before writing this, but it doesn’t appear to change tiny text, nor is there an option for this.) 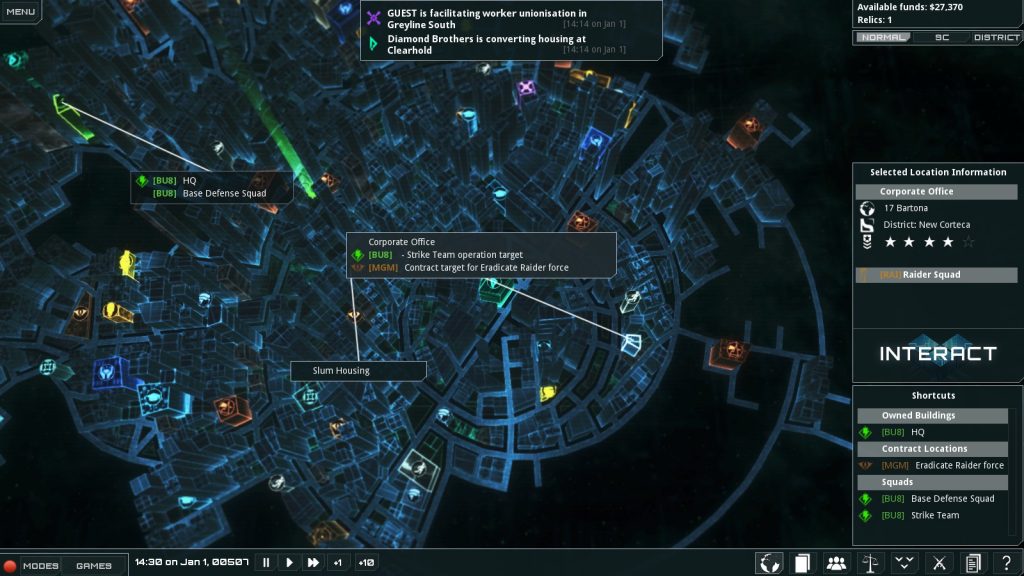 Just a minute or so before I make a mistake that dooms a merc, I appreciate… Oh gods, this is a lot of buildings!

Add in some awkwardness in Multiplayer (If you want to add one of your own matches to Favourites by liking it, you have to search for its ID in the Match Play tab, rather than something more intuitive), and all of that interesting stuff I mentioned… Is less accessible to folks.

So, unfortunately, I can’t really recommend it. Its single player is complex without good support, its multiplayer isn’t for everyone no matter how friendly its community is, and, while it does make some steps in terms of colourblind support, that doesn’t change that a lot of its UI text is painfully small. It does expand on what worked well in the main game, and, apart from the knife, which is… Not something useful to a beginner player, those expansions add depth while still being easily explored. The rest? Not so much.

The Mad Welshman would make a poor mercenary leader. I mean, who gives soldiers orders to shoot without ammo?