Source: Review Copy
Price: £39.99 plus BOODLES OF DLC
Where To Get It: Steam

It speaks volumes that, when attempting to talk about the FATE universe(s), I end up using a lot of jargon, and a lot of things get capitalised. So let’s try and keep that to a minimum, because I want you to understand why I’m okay with FATE/Extella, and its rather… Odd universe…s.

Yes, it’s a JRPG/VN/Musou game, so there is the obligatory “Ohhhh *Japan* ! o.O” character.. Well, a couple.

Essentially, every now and again, regardless of universe, a war is fought over the Holy Grail. Yes, that one. That one which has also been a Cosmic Horror in disguise, is pretty much always the asshole kind of wish-granter that twists your wish in the most evil way possible, and somehow, keeps tempting people to summon spirits of heroes past, be they digital avatars with souls (as in the Extra/CCC/Extella universe), or literal phantoms of the past, drawn from their time to fight in a thematic cage match with one nominal winner. I say nominal because damn if the winner doesn’t nearly always get the shaft somehow. Like I said, the Holy Grail is an ass.

Anyway, the Grail War is over. SE.RA.PH, the amazing moon computer, has become peaceful, united under the rule of Nero Claudius, who is a woman, and of the “Oh, my brave love!” type. Iiiiit’s pretty obvious it’s written for the dudes, it must be said, even though the option of playing a woman is there (An option I took. It doesn’t make the romance dialogue any less awkward.)

EXCEPT THINGS, UNSURPRISINGLY, ARE NOT WELL! When are they ever, eh? Anyway, with a band of supporting heroes, a cast of villains, and robot/AI mooks aplenty to beat up, you… Wait, this sounds… familiar.

Yes, it has many of the same elements of Senran Kagura. Visual novel sections, broken up by sections where you wallop the shit out of mooks, defeat bosses, and, in a more traditional twist, have to successfully control portions of the map and do objectives before you do so. Things that add depth, like having to keep an eye out for Plants, which spawn enemy attack forces if you don’t murder them, get rid of thematic elements like Medusa’s Blood Fortress, and that most dangerous of tasks, Pursuing Lu Bu. 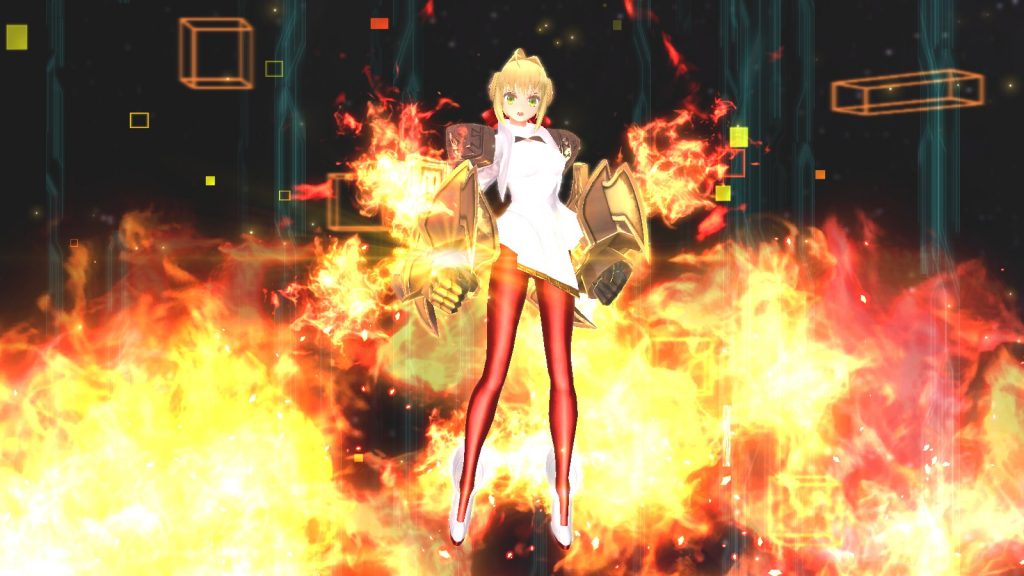 Luckily, like any Shounen Musou character, Nero Claudius (Who is a girl, yes) not only has her Noble Phantasm, she also has a Shitkicker Mode.

If you saw a lot of capital letters and jargon there, yes, this is largely unavoidable. Keeping it simple, the majority of the game is “Beat up mooks in rooms until larger mooks appear, beat them up, rinse and repeat until you control a room. Oh, and watch out for that other stuff like Plants, objectives, or the fact you have allies, and them getting beaten down makes your situation worse.” And then there’s the story bits, where the right choice when talking to your main Servant nets you better Bonds, those, in turn, net you scenes where you bond with that individual (romantically or otherwise), rewards…

…This is the first problem with FATE/Extella: Even though the game does its utmost to explain things, it’s one of those examples of a long running, multi-continuity series that feels dense to the outsider. I know some of it from the various anime (Yes, it’s a multimedia franchise too), but other bits feel a mystery, even if there’s an in-game Encyclopedia to try and explain it. It’s the same with a lot of the universe stuff. Players who’ve played the other games, or seen some of the anime in the Extra/CCC/Extella continuity, may well be ooohing and aahhing, but as someone who hasn’t? I’m mostly confused, except for the bits transplanted from other continuities or series. Nameless? Oh, yeah, that’s that guy! Meanwhile, why is Elizabeth Bathory an Idol Singer, and… Well, a bit of a joke character, to be honest? 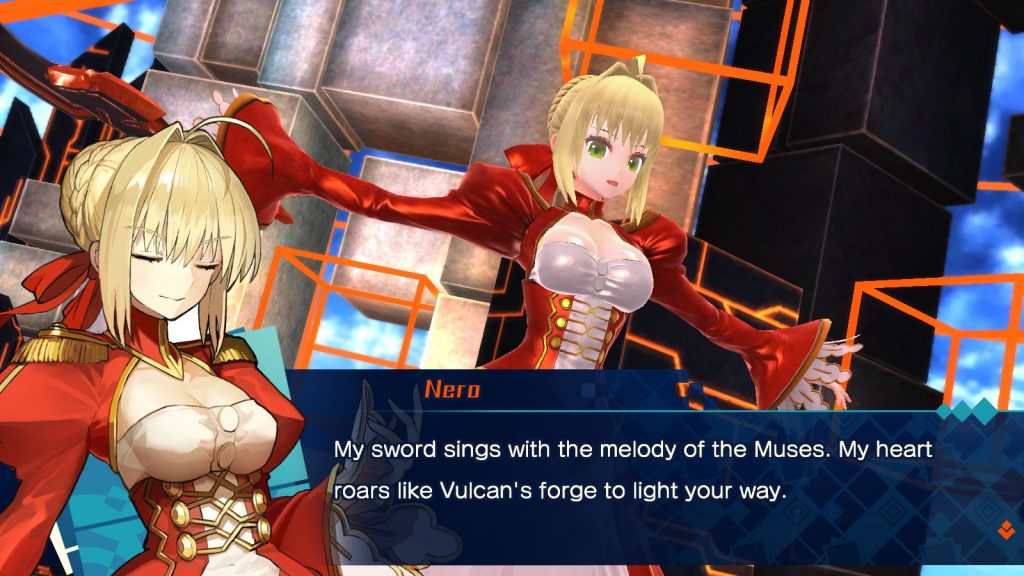 Nero is somewhat exuberant, and… There was a word for her character, but I forget it. Answers on a postcard…

Despite my recommending a controller is used, the default keyboard controls aren’t actually terrible… But it does make for a lesser experience, as the camera is controlled with the arrows, the movement with WASD, and basic attacks and jumping lie awkwardly in the middle, so you sometimes have to awkwardly shift to… Well, see what the hell’s going on. The musou gameplay is alright, but the Bond system feels a little bit arbitrary sometimes. Not with the VN segments with each character, you’re playing to their mood to get on better with them, but with the side mission mechanic, which is taken from a pool of choices including things like “Eat 4 Yakisoba Bread in a single mission.” I’m not even sure I’ve seen a yakisoba bread, let alone 4. Similarly, unless you really, really need it (and you won’t, at least until the midgame on normal), do not use the Command Sigil thing, as it resets your bonds.

I could, in essence, say a hell of a lot more, because there’s a lot of mechanics, but the game tutorialises fairly well, and, although I grimace at the awkwardness of some of the VN writing, the overall idea is quite interesting, I like the world, and the musou beat-em-up segments have interest and variety to them. It’s still a shame it’s a later game in the series that’s translated, because you get that word salad that you’re already expected to know, but Fate/Extella does not appear to be a bad game. Just somewhat opaque to newcomers lorewise, and, as mentioned, a controller is highly recommended.

The Mad Welshman is still rather confused by VN/Musou hybrids, and the seeming need to shove a romance plot in there, but explanations thrown at me tend to make me dizzy.