I could, in essence, repeat what I said in my Early Access review. I could. But that wouldn’t be fair to the fact that the developers have attempted to change things up (Planets happen earlier, some other things happen later, change in voices, some writing differences). So let’s go through things.

Pretty. Disconnected. It… Kinda looks how the game *feels*

In some unknown time, humanity is kind of doomed, thanks to three planets. Except for a runny, jumpy artefact hunter who finds themselves near the ruin of a posthuman human outpost, a hermit trying very hard to be both mysterious and Yosemite Sam, a mysterious woman-voice, a skull that used to be an astrologer (astronomer? Who knows!) and mysteeeerious devices. There’s just one small problem: You’re not really given a reason to care. Since our protagonist is a confused young man, and meant to be some sort of tabula rasa for us, let’s do this from my viewpoint.

I start in a dream. I can escape the dream by parkouring my way through things, with knowledge that I have, but I also don’t (Oh, that’s an Anomaly? What kind of… Oh, a jumpy anomaly… Well, good thing I knew that… Somehow!) Having escaped my dream, I find that… It probably wasn’t actually a dream. I’m not sure. All I know is I’m somewhere else, and mysterious lady is urging me onwards. Well, onwards I go, picking up some old relics of human civilisation because, well, that’s me, I’m a relic hunter… Oh, wait, nothing to really piece together here, they’re gears and canteens and things, I know how those work. But wait! Also, there are skypieces! These aren’t Lightseeds from Prince of Persia, that’s a totally different game, except… Wait, they are. They’re for unlocking abilities, only a few of which will help me progress. Also, there are crystal buttons. I don’t know what they do, but an equally mysterious thought in my head from outside tells me something will happen if I find them all. I shrug, and move on, ringing the Ancient Bell of Life Saving Through Mysterious Means.

Crystal turrets. I know how to deal with those. I just have to push the equally mysterious Crystal Disc that’s somewhere nearby, and they’ll fall apart. Mysterious. Okay, I can see evidence of civilisation, that’s intere- Wait, Golems? Where? 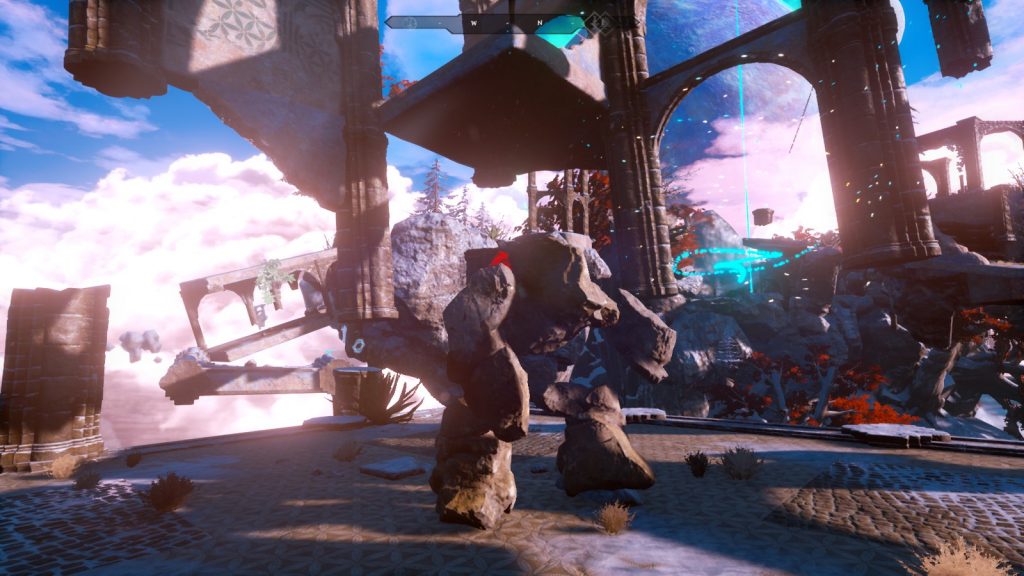 “It’s facing downward!” Yes, like the last twenty times. I think I get it now.

Oh. Rocks held together by some cube or other. I can’t take the cube off them until they’ve “phased down”, which involves staying out of their way until they do some form of mega attack, after which I can pluck them, and if I don’t, I have to go through all this again. This takes an average of about five minutes. Each time. And some Golems have more than one cube. Where’s the exit again? Oh, it’s locked by… Those cubes. Which also whisper to me, because mystery. Also, an intrusive thought from outside interjects, because it makes finding them somewhat easier, because at some point I’ll need to have grabbed at least 150 of the damn things just to open a door. Possibly more.

A statue! I can use the Not-Lightseeds to buy powers here, most of which I don’t care about that much right now. Fast Travel sounds good, whatever that may be. Louder whispers from these cubes also sounds good, but the rest is health and stamina and things, eh. Quality of life stuff, my other mind interjects.

A fellow human being! He was kind of hard to see, but I can certainly hear him, and he’s not from where I (or the lady) am, that’s for sure! I’m a puppet? How mysterious! Nah, he’s just Crazy. I live in a time where there’s not enough humans left to give a shit about ableism, let’s go with that. Oh, but he buys our stuff for Not-Lightseeds, I… Don’t really need those that much, interjects my other self.

Mines! Except they’re slow, the disc to deactivate them is on them, they’re more a nuisance than a threat unless I’m unaware or otherwise occupied. Woo. A Mysterious Artefact! It lets me use those anomalies I was… Using… In my dream. There’s some other anomalies, and the mysterious other mind tells me that yes, those, too, will be unlocked with an artefact, with Progress.

My mind blanks out. Everything goes black. And the other voice takes over. 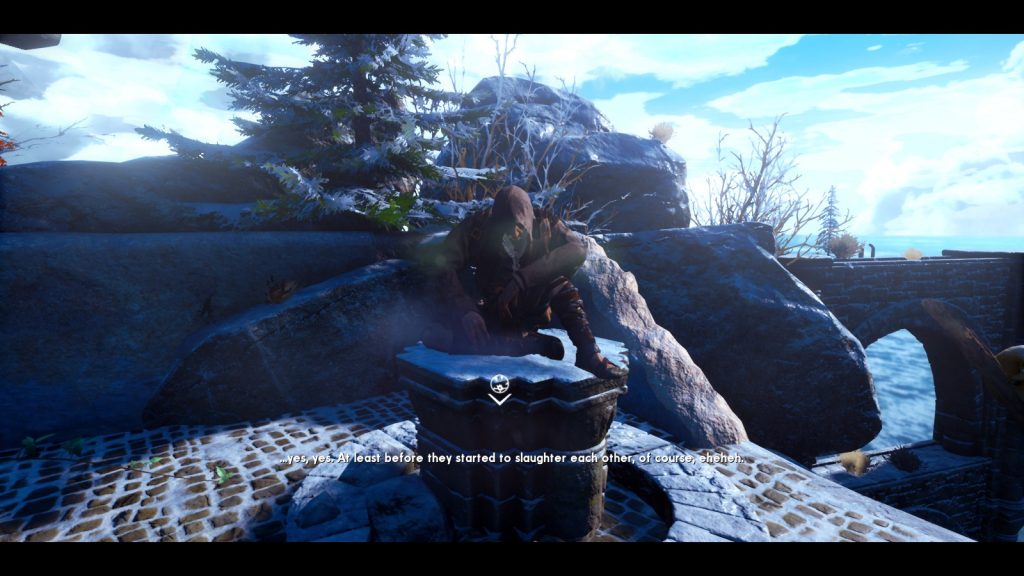 It’s all very well to have mystery, but a mystery without a reason to explore it, or stretched out too long becomes tedious. It’s all very well to have a collectathon, but when the gatekeeping is this transparent, it becomes a tedious duty rather than a joy, not helped by the fact that elements of it (Cubes from Golems, specifically) is tedious. Downward looks pretty. Its music is good. But, like the gears and mysteeeerious pillars (Challenge maps, and also a plot point), the game elements stick out like a sore thumb, only awkwardly fitting with what I’m assuming is meant to be a mystery of the same byzantine look of the architecture and the walls you can use. Overall, a very unsatisfying experience, and a good example of how your mechanical aspects can over-ride your narrative ones.

The Mad Welshman notes that the more things change, the more they stay mysteri- crap, that’s 17 times I’ve said that now, isn’t it?