Flying through space in a giant brick with guns, with fighters swarming around me is, perhaps, one of the more powerful moments I have. Yes, the giant space brick (A Heimdall Lineship) steers like a cow, and it’s somewhat hard to see exactly what I’m aiming at, but that’s not really mattering too much, because all of my guns are firing, enemy ships are dying, and, in my own small, confused way, I’m contributing to the capture of the Ixion space station.

On the one hand, this thing steers like a brick with strings. On the other, goodness me, it makes things explode!

This is just one moment of Angels Fall First’s gameplay… In a 64 player botmatch. Well, 63, minus me. And it feels good.

A quick catch-up: Angels Fall First is a science fiction multiplayer team shooter, along the lines of a Battlefront, Battlefield, or COD, with space and ground based missions, a bewildering variety of builds, weapons, and vehicles, and locales, that essentially boil down to either taking an objective, destroying an objective, or defending an objective, supporting both multiplayer and solo, bot driven play.

Aesthetic wise, it looks good. Chaotic, but good. Everything has a chunky style that gives at least some idea of what people are using (I can tell, for example, a sniper by the long barrel as they run, or a heavy by the fact that their armour is bigger and chunkier), and the music is properly pounding and theatrical, changing as the battle comes to triumph… or disaster. Elements of the UI are somewhat confusing (The radar in the lower left, for example), and, sadly, the game’s loadout function isn’t as helpful or informative as it maybe could be, but being able to save your own custom loadouts for later use, working them out in botplay, then using them in multiplayer does help somewhat. 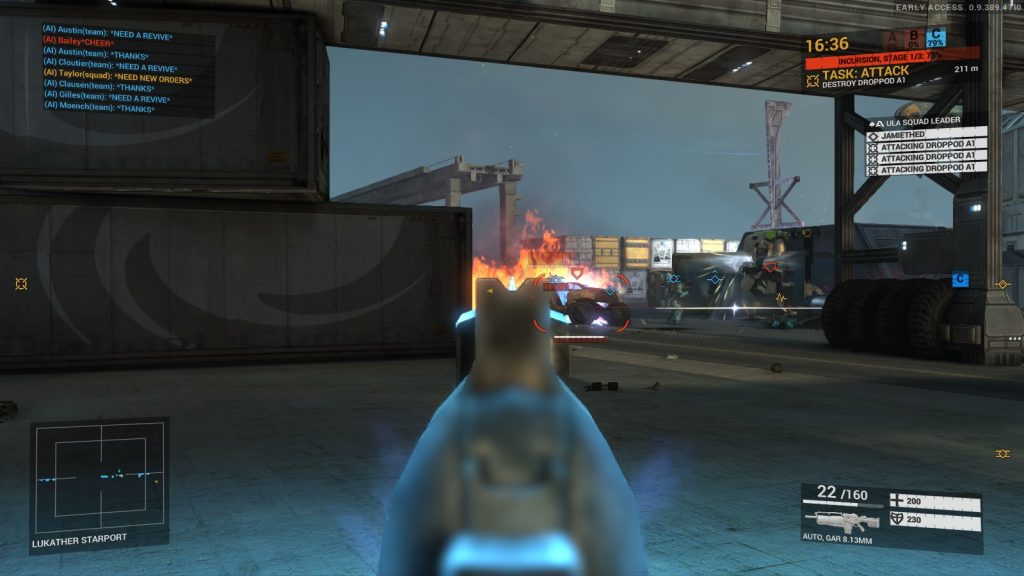 Yup, that sure is a thing I’m seeing… an LAV and a Mech fighting side by side, while infantry like me scream and hide.

So, it looks pretty good. It feels pretty good. It’s got its flaws, mostly to do with informing the player what their loadout does and what it’s good for. How’s the AI play?

Well, the AI is very objective focused. What this means in practical terms is that, on the one hand, defending in Incursion mode (where the attacking party has dropships that can be destroyed, but the defending party can’t regain any objectives they lose) is a tough proposition… But on the other hand, the AI is so mission focused that a player can, if they survive long enough to get to the dropships, do some serious, unregenerated damage, perhaps destroying a dropship in a single life. That’s highly chancy early on, when the enemy is pretty much streaming from a single LZ (so your chances of getting to the dropships are low), but once I got to the dropships… Well, the ship defends itself, but the AI infantry tended to only take potshots before heading off to their designated objective from the dropship. So that needs a little bit of work. 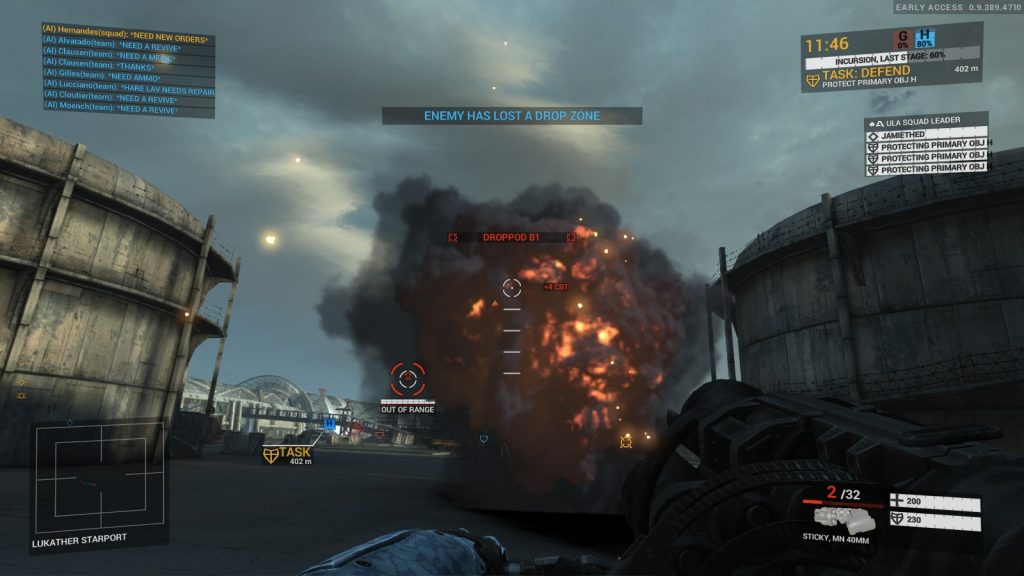 I don’t mind this *so* much… After all, I still feel like a badass for doing it. I just probably wouldn’t be able to against human players. XP

Still, for a small team, this is a big game, with customisation options out the wazoo, a variety of weaponry (and the weight of your loadout does matter), and a bunch of ships and maps. Even in Early Access, even with things it needs to iron out, this gets a thumbs up from one of the more multiplayer averse reviewers out there.

The Mad Welshman hasn’t really favoured multiplayer since Bad Company 2. That should give some idea…