A Matter of Murder (Review)

Source: Cashmoneys
Price: £1.99
Where To Get It: Steam, IndieGameStand, AppStore, Google Play

Good murder mysteries, at their core, are problems of logic. Whodunnit? Howdunnit? Whydunnit? Be able to come to an answer at the same time or before the detective does, and you know you have a good murder mystery. A good murder mystery game, on the other hand? Ooooh, that changes what questions you’re asking a bit. Howsolveit? Whyloseit? 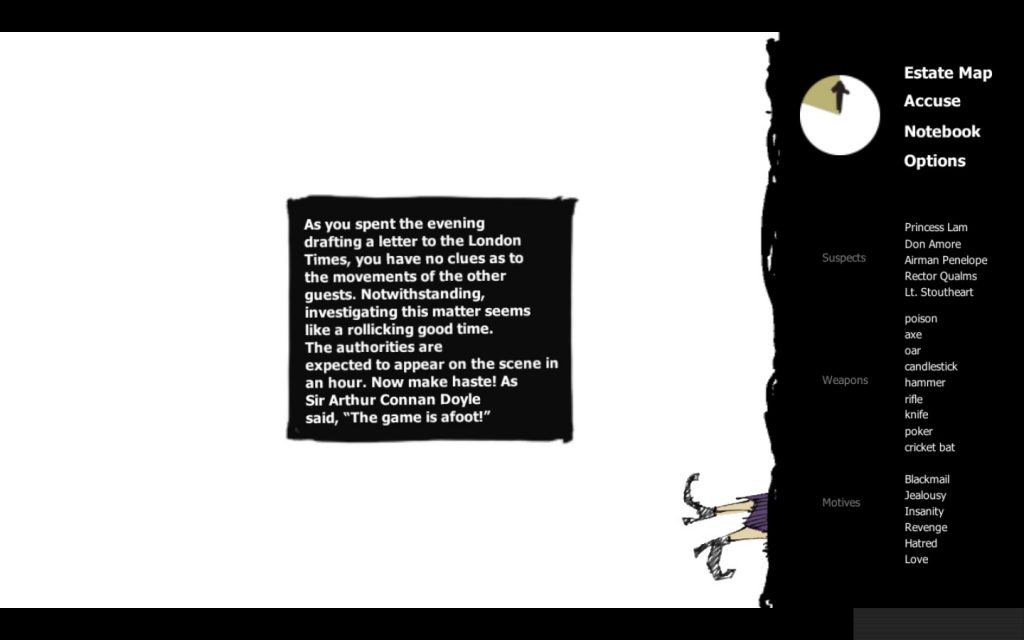 Y’know… There’s always *something* you’re doing when a murder happens. I was *enjoying* writing to the London Times, dammit!

…Don’t think those are as catchy though, so let’s talk about the game itself, a procedural murder mystery game based on that good old murder mystery staple, the mansion murder. There’s an hour before the Bobbies arrive (Well, one Bobby, but he is a Bobby, in the vernacular), and if you want to feel like a clever clogs, you’re going to have to work it all out from a somewhat limited set of tools. Specifically, asking the guests one of three questions (Alibi, Weapon, or Motive), clicking on evidence (Be it something out of place, or the possibilities for the murder weapon), and going over your notes looking for contradictions. If you want to really feel like a clever clogs, try solving one in half the time by hitting the “Master Detective” checkbox in the Settings.

In any case, the game is in two “parts”, both procedurally generated. There are the stories, of which there are 12 (Plus the tutorial), and generating a case whole cloth. The major difference? With the stories, you know what the gimmick is from the first or second time you play it, whereas the “Generate A Mystery” uses at least one of these gimmicks. So it’s pretty safe to say the generated stories are where the main play is at, while the stories are an extended tutorial as to what sort of things to be looking out for. Enjoyable… But more predictable. 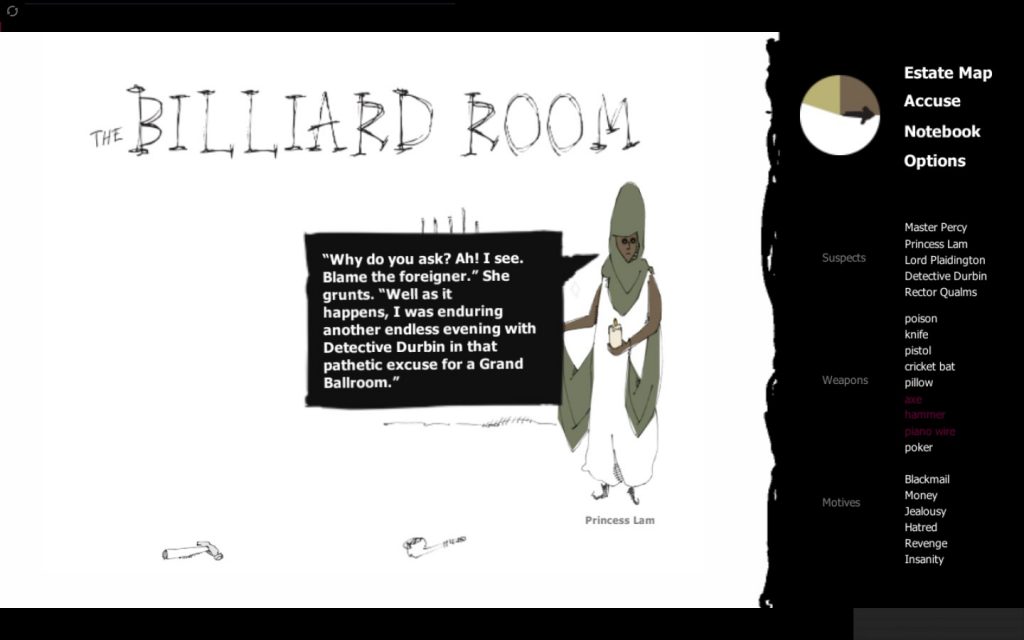 I… I don’t know how to take that, your Maje- Waaait, you mean the *other* Detective Durbin!

The art style is nice and simple. Hand drawn, it gives you clear differentiation between items, and everything has a place. People, evidence, weapons, secret door handles… Oh, did I not mention the game has secret doors? The achievements do. And if you’re buying this game to get some more achievements, you’ll have a fairly easy time, as the two hardest to get are for… Getting murdered, and letting the killer escape. Musically, it’s a lilting, Victorian style score that sets the scene and then, for the most part, stays in the background. I’m quite fond of both the art and music for their clarity and simplicity.

In any case, the real draw of this game is the fact that yes, more than one gimmick can exist at a time in the generated mysteries. One case, I had items lying about to prove people’s alibis, but it was a red herring, and one that lost me the case, as I discovered, too late, that what I needed most was to work out who had held the murder weapon last. Another, I felt exceedingly clever by not only catching out the murderer, but proving somebody else was covering for him by the hole in their own alibi. Generating a mystery, solving it. Each case takes about five to ten minutes, so it is, essentially, a game that you play in short sittings, when you have a hankering for feeling like a proper clever clogs. 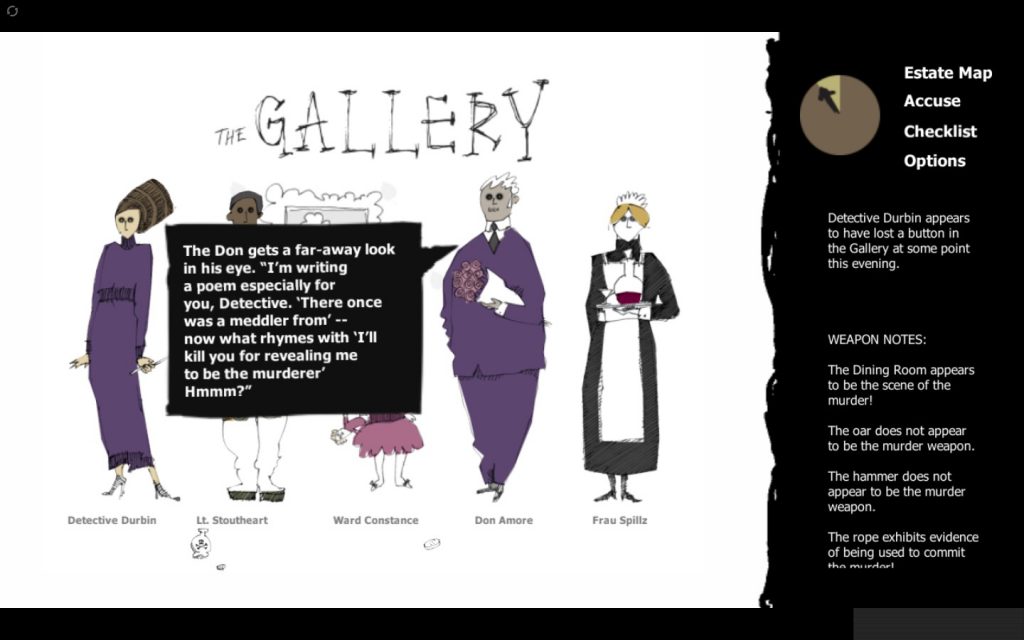 Nothing makes you feel like a clever clogs more than the murderer swearing revenge, I say.

Of course, sometimes, more than one gimmick leads to the same result, leading to a bit of confusion. I didn’t calmly explain how Rector Qualms was the last person to get his grubby little mittens on the poker, Narrator. I calmly explained how there was proof the other Detective Durbin (Named via the settings, a small, but nice touch) was in a room, making his story match with Master Percy’s, but Qualms had said he was with Detective Durbin in an entirely different room that she wasn’t in! Sheesh! Still, that’s a relatively minor quibble, and fixing it so the game knows which of the alibi gimmicks you used if it used two at once would most likely be a pain in the posterior. The only other minor quibble is that you can’t seem to set the monitor it displays on in-game.

However, I think, for £2, I’ve most definitely achieved satisfaction in this arena, and can happily come back every now and again when I need a boost to the confidence I have in my critical faculties. Also playing a murder mystery in which my friends (Or, more likely, those foolish enough to earn my ire) are the guests. A simple, accessible, and entertaining game, overall!

The Mad Welshman does not believe Insanity is a valid motive for murder. It’s somewhat ableist, and paints a dim view of folks with real problems. The other motives, on the other hand? Naaah, those are just fiiiine. Now, how much did you owe me for not talking about the Scarlet Crozius Incident, Vicar?