Source: Review Copy
Price: £10.99
Where To Get It: Steam
Other Reviews: Early Access

20XX is a game with a laudable goal: A platformer heavily inspired by the MegaMan X games with random level generation. All the ideas, all the replayability! It’s just a shame it doesn’t really work out that way, for a variety of reasons. 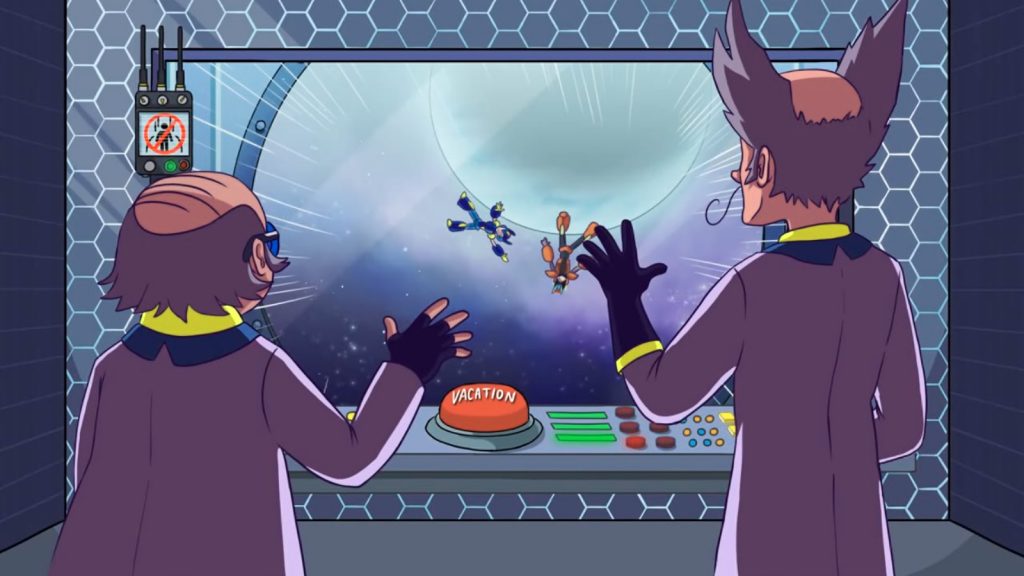 Aesthetically, 20XX has come a long way from when it was under a different name. It’s clean, it’s got good tunes, it’s got moderately good sounds. The enemies are visually distinct, and so you quickly learn what type is what, whether you can get nice things out of them, and what they do. That’s good.

Not so good is the fact I have little to no incentive to play Nina, the Not-megaman of the pair of Nina and Ace (who is Not-Protoman/Zero.) Equally not so good is the fact that the stages, very often, are more lethal than the bosses. And some of the bosses, honestly, are eh, even in their difficult forms. Let’s get into that a little more, starting with the linked problem of Nina and the levels.

The game features two characters: Nina, who shoots bullets, and has a piercing charge shot (with the option to change this basic attack to a variety of directional bullets or a wave-beam if you find the right powerup.) , and Ace, who has a sword, which he can charge, but, honestly, doesn’t need to (and, like Nina, can switch out for a variety of melee type weapons of varying utility, damage, range, and speed.) Both can dash jump. Both can use the same boss weapons, in the same way. Both can use the same permanent and per-run powerups that are unlocked by gaining one of the three types of currency in the game. 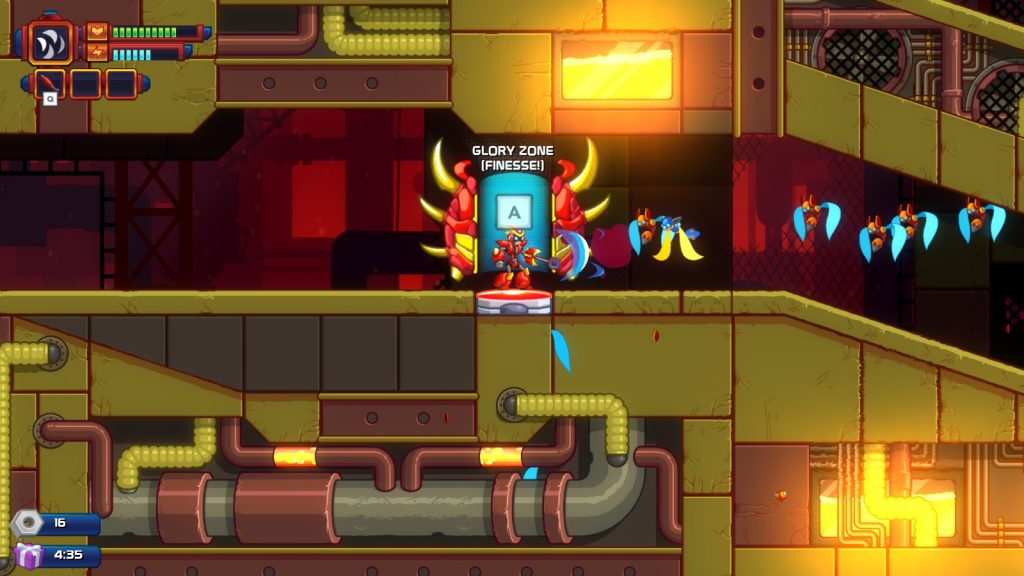 FUCKING BATS. Although thankfully not over a deathpit, or between two platforms, or any of the innumerable situations they just ANNOY THE HELL OUT OF ME.

When playing as Nina, to deal with hordes of bats, I need to waste a second or two charging my weapon, and lining it up. Without an alternate weapon, I have no means of dealing with enemies above me. When playing as Ace, most of my weapons can attack at least a little upward by default, have a wide area, and can chump hordes of bats with a few quick taps of the attack button. It’s not even a subtle difference. I have little incentive to play as Nina.

Meanwhile, one of the elements of the game is random level generation, using native enemy types, bats (Which are everywhere, and are annoying obstacles just as with videogame bats everywhere), and native trap types. Agnisort, the fire area, has conveyor belts and fireball launchers, with welding flames on the walls, belts, small pits… Anywhere they would fit, and a couple of places they shouldn’t. Vaculab, meanwhile, has that MegaMan staple, Yoku blocks (blocks that appear and disappear on a timer) and deadly vines. Skytemple relies on lasers, conveyor belts, and bottomless pits to kill you, while Frostor has spike shooters seemingly everywhere, even in places that are meant to be considered safe. It’s all generated according to a rough plan, it’s true, but I can almost guarantee you’re going to take, especially toward the end as the frequency of the traps increases, more damage from the stages than you are the bosses. Occasionally, the game will even generate a big ol’ middle finger, like the time my only path to progress was blocked by a pair of vertical lasers, each perfectly bisecting the platforms I needed, and seemingly timed to go active while the platforms were accessible.

Suffice to say, I didn’t appreciate that one tiny bit. 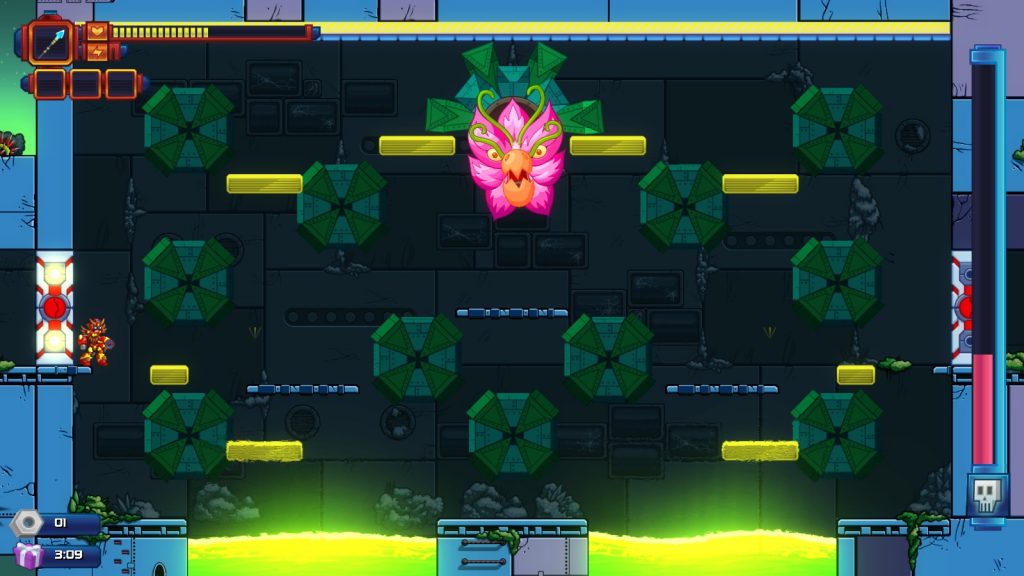 This jerk has gone through multiple iterations. He’s *less* annoying in the final release.

While we’re here, let’s talk about the bosses and their weapons. Bosses are, with only two exceptions, larger versions of the level enemies, with their highly pattern based gimmicks. Rollster is a robot hamster in a sawblade monowheel, and he bounces and fires sawblades. The Astral Twins are fireball spewing robot gorillas who will resurrect each other if you don’t kill them both within about ten seconds of each other. As the boss order is also randomly generated, both levels and bosses are meant to get harder the further you get. This is very true for the levels, but the bosses? The stages consistently seem to do more damage, and their weapons vary wildly in use. One, Skydragon’s, is essentially there as a reference to Aqua Teen Hunger Force. It’s a big, slow moving cuboid bullet. Yes, whatever it hits will take heavy damage, and it has some piercing, but it’s also easily blocked, and, just like the sketch with the Mooninites, it moves slowly enough that you might as well not bother with it.

In the end, one of the biggest problems with 20XX is that it’s trying to recreate the feel of a game series that mostly relied on tight level design with procedural generation, and so many of the obstacles and “set-pieces” feel arbitrary. Oh look, six bats. That I have to wait for, watching them crawl across the screen, because if I don’t, I’m going to screw up the timing of this conveyorbelt/fireball/welding torch “puzzle” that’s also going on. 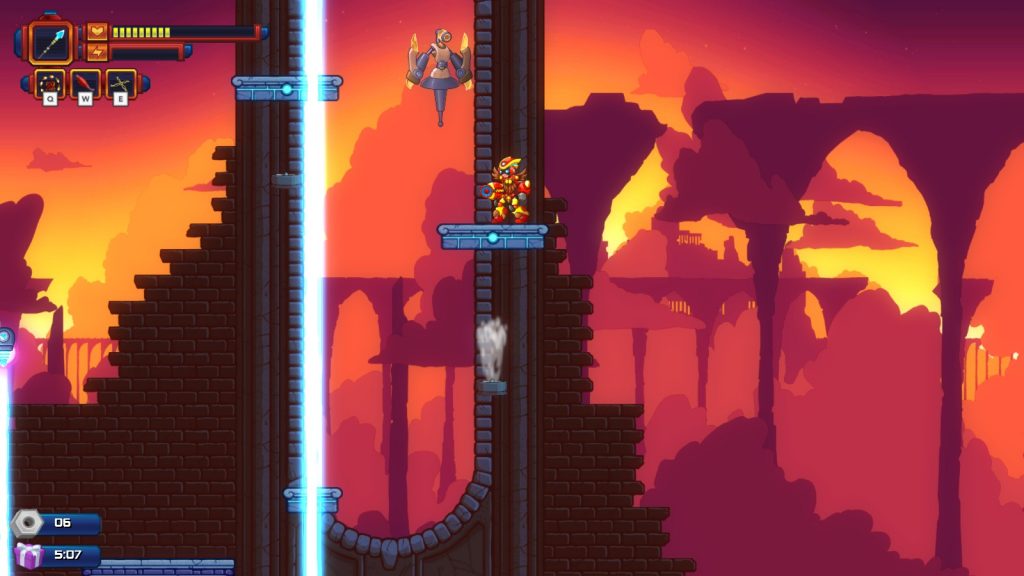 Occasionally, the procgen will just outright screw you. Just quit to the menu at this point, you’re going to die.