It’s not often I feel compelled to cover a game jam, although their importance as a communal activity can’t be underestimated… But when you have a game jam that also involves the history of computing and games, it’s hard not to sit up and take notice. Such is the case with the Octo-Jam, which officially finished its second year with the roundup, posted just a few days ago online. 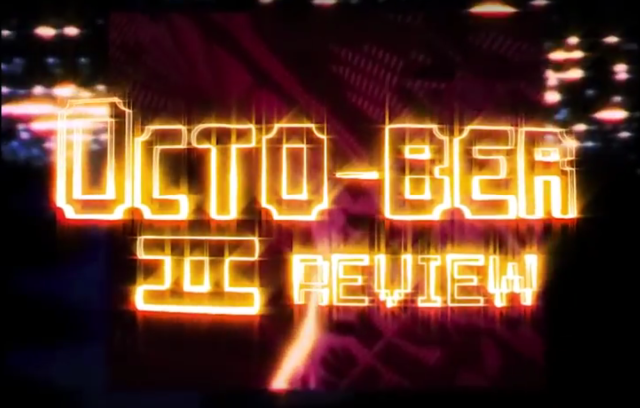 Ah, the 70s… A time of some *really bad special effects*

Now, because I know a few readers are new to the concepts of gaming and game design in general, let’s go through some things before we carry on. A game jam is a time limited programming event, where amateurs and professionals alike create a game within a limited time frame (In the case of the Octo-Jam, this was the month of October), and there’s always a theme, or a quirk involved. Sometimes, this theme involves languages and limitations we haven’t really had to work with for a decade or two, and such is the case with the Octo-Jam.

Why? Because it involves making a game for a dead language: CHIP-8. CHIP-8 was around near the dawn of computing (The mid-70s, to be exact), and had, for all practical intents and purposes, less than 3584 bytes of memory (512 bytes was taken up by the interpreter). There’s more information both on the wikipedia page, and Octo-Jam’s own page, but essentially, it was used on two kinds of 8 bit computer (the COSMAC VIP, and the TELMAC 1800), a few graphic calculators, and that’s… About it. If it wasn’t for computer and videogame historians, enthusiasts, and, of course, the creators of the Octo-Jam (Everdraed, JonTerp, and InternetJanitor), it would probably have faded into true obscurity.

But the Octo-Jam, in its second year, not only had quite a few entries, all doing interesting things with the CHIP-8, SUPER-CHIP-8, and the new XO-CHIP instruction sets (All using the Octo assembler) … But some of them were tested on an actual COSMAC VIP by computer historian Douglas Crawford. And all but two of the 8 programs he tested worked well. 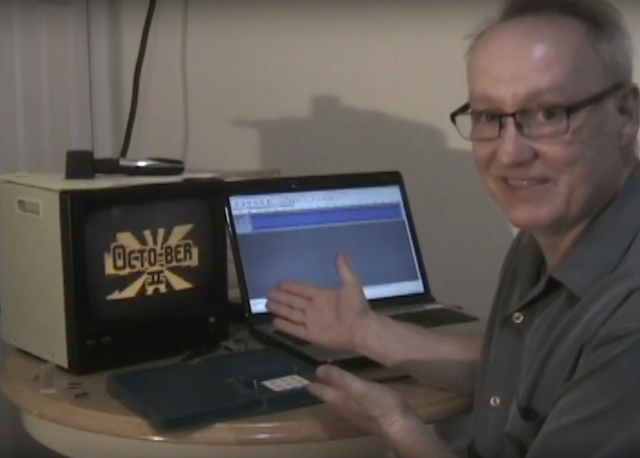 Douglas Crawford with the COSMAC VIP, and the Octo-Jam demo loader. Greenscreen and all.

The entries can be viewed at the official Something Awful Game Jams webpage, but here are my own personal favourites. 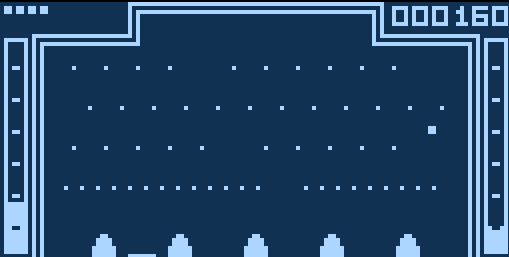 It plays very smoothly, and is just as challenging as the original. No powerups, though.

Demakes, the practice of making a game in a system much older than it was originally designed for, are fascinating things, and OctoPeg (a demake of Popcap’s Peggle) is no exception. You know, while watching it, that the older system is being pushed to its limit, and the design documentation is an excellent look into how much thought was required to make this work at anywhere near the level Peggle on modern systems would. To my mind, this is the most technically accomplished entry in the Octo-Ber Jam II.

You can find the post mortem on the game page here, and, if you’re interested in programming and design limitations, it’s a fascinating read.

These two games, both by the same creator, only show the cleverness once you get into the source code. At first, you play Alien Hunter, think it’s a bugged game (And it is), and shrug as you play its compatriot, which only differs in that it uses different sprites, and that it works.

Then you look at the source code, and you discover that Alien Hunter is a Creepypasta. It tells the tale of a programmer who is finding some increasingly buggy code, and it ends in tears.

The two games are exactly the same size, but one works, and the other doesn’t, because it uses the code to create junk instructions that make the game rapidly unplayable in different and interesting ways… Only some of which are mentioned in the code. 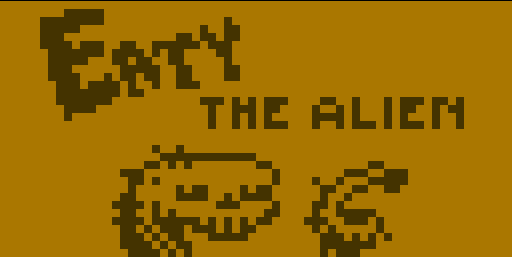 ET for the Atari 2600 is an infamous game, and I shall most likely be giving InternetJanitor some fake side-eye for a while for providing a demake of this game. However, I can’t fault either his coding skill or showmanship, because not only does he provide a well made demake of that awful, awful game, he provides an amusing false history in which a company is approached by Spielberg for a game based on his hit movie, finds it wanting, and they attempt to sell it anyway, removing as much copyright infringement as they can…

You’d think this wasn’t a compelling story, but, as any video game historian knows, bootlegging has sometimes been the entire basis of games companies in the past. It’s also to his credit that, really? It plays well… Probably better than the original Atari 2600 offering. And I have to laugh at the reference to Eaty’s “Magic Neck” in the (fake) manual page. A well crafted pastiche.

This is one of the easier mazes. And it has variable difficulty levels.

Sometimes, all you need is an interesting variation on a previous idea, and OctoVore, by pangasaurus rex, is definitely that. Remember Snake? Sure you do… Many of you probably still play some variation of it when you need something simple and fun.

OctoVore is fun, but it’s less than simple, because you’re keeping an eye on two “snakes”, and they’re both connected to a hungry, hungry octopus. Levels are fixed, but get complicated pretty quickly, with asymmetrical mazes, less food on one side than another (leading you to keep your other arm safely occupied while the first grabs the rest), and, while the levels are pregenerated, there’s enough here to keep you going for a while. Beautiful.

Well, except for the control scheme, which is evil incarnate: 2QWE for one arm, SZXC for the other. Look at your keyboard, and tell me you can do this without being an octopus.

…Okay, I exaggerate. A little.

This wouldn’t look out of place on a C64… But the XO Chip allows such graphical wizardry.

T8nks is, like many of the XO games, not technically able to run on the original system (as the XO is an extended instruction set, and very much a modern creation), but it is interesting. Tanks, Scorched Earth, Gorillas… Some variation of this game has been on most 8 bit systems, and T8nks has a little fun. Randomly chosen special weapon pickups each level, a “Trick Shot” system, in which banking from the bottom or side of the screen will earn you extra points, and wind, adding a challenge factor that’s always enjoyable in such games.

All of the games are playable on the AwfulJam site, with links to the source code, and occasional post mortem, and you can watch the roundup on YouTube here (Complete with some 70s glitz to start things off, and some 70s hardware, as demonstrated by Doug Crawford, to end it with a bang)

I am promised by the jam’s founders that the jam will not only continue, but have some more potentially interesting wrinkles and changes for next Octo-Ber. I’m definitely looking forward to it!