Auto Age Standoff is a game I foresee playing quite a few bot-matches with. Not because it’s a bad game, but due to the simple (and sad) fact that not every multiplayer game gets a playerbase. And, for all that Auto Age Standoff is, at the time of writing the review, a fun multiplayer game, and one with the much needed feature of playing against bots (and challenging ones too) when, say, nobody’s around to play, it is also a game that needs more players. Also, it’s a game that nails the aesthetic it’s going for. 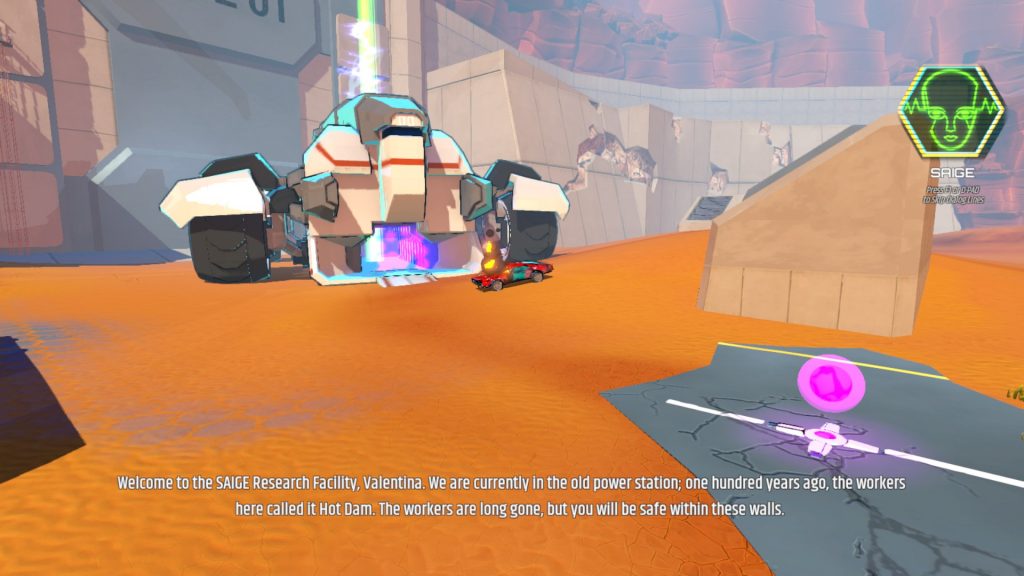 What aesthetic is that? Saturday Morning Cartoons. Cheesy theme song? Yup. Bright and clearly cel shaded? Yup. Colour coded factions? Yup. Villain who possesses not just one name that makes you question their life choices, but two? Oh, hi, Bonecrusher who is now Dark Jaw, leader of the evil Jawlings!

So yes… In the far future, SAIGE, an AI who helped preserve the civilisations of the wastes, is being hunted by Dark Jaw, so he can RUUULE THE WORLD AHAHAHAHAAA!

Er… Sorry, villainous side showing a bit there. Anyway, she recruits a courier called Val Vega, and… Well, there’s more implied in the world, like the missing (in universe, but playable in game) S-Force, the Jawlings, and the like, but beyond the tutorial… Well, that’s your reason for fighting in arenas in bright, team colour coded vehicles. This, by the way, is the part where I get a bit sad more people aren’t playing this. Why? 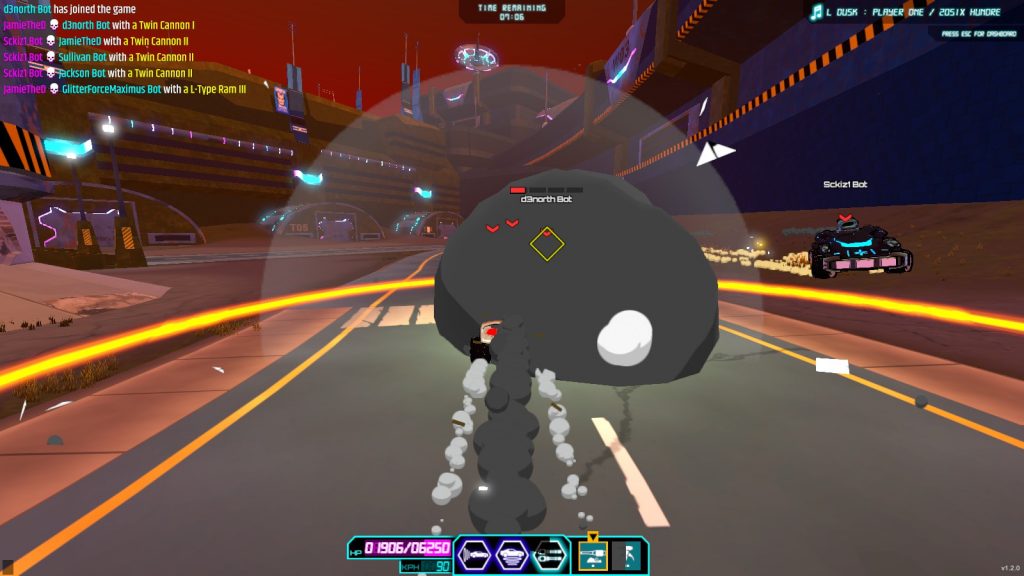 Combat is quick and chaotic, but most of that is movement. Targeting is automatic at the right ranges.

Honestly, it’s fun. Vehicles each come with one special ability according to their type, such as Medium vehicles having self-repair, and Heavy vehicles coming with a ram damage booster auto-equipped, different secondary special abilities can be added (like auto-tracking turrets or drunk missiles), the handling is different enough that you feel it, but not enough to make anything but a tower feel like a brick riding on other bricks, and you can be really, really mobile.

Okay. Consider this for a second. Boosting into an enemy car. They get knocked back, you back up a sec, power forward, then… Jump and shoot them from above. Yes, these cars have jumps, boosts, and, with a good run up, can basically flip. Even if you do end up on your roof, flipping is quick and easy. So yeah, it’s pretty fluid, and the AI is fun.

Essentially, if you want something cool and multiplayer that you can play with friends, and practice with bots, Auto-Age Standoff is pretty fun. Sure, it could do with more SatAm cheese than the tutorial provides, but honestly? The developers are adding new maps with each update so far, the 8 maps currently in provide a fair amount of variety, and I’m okay with that. 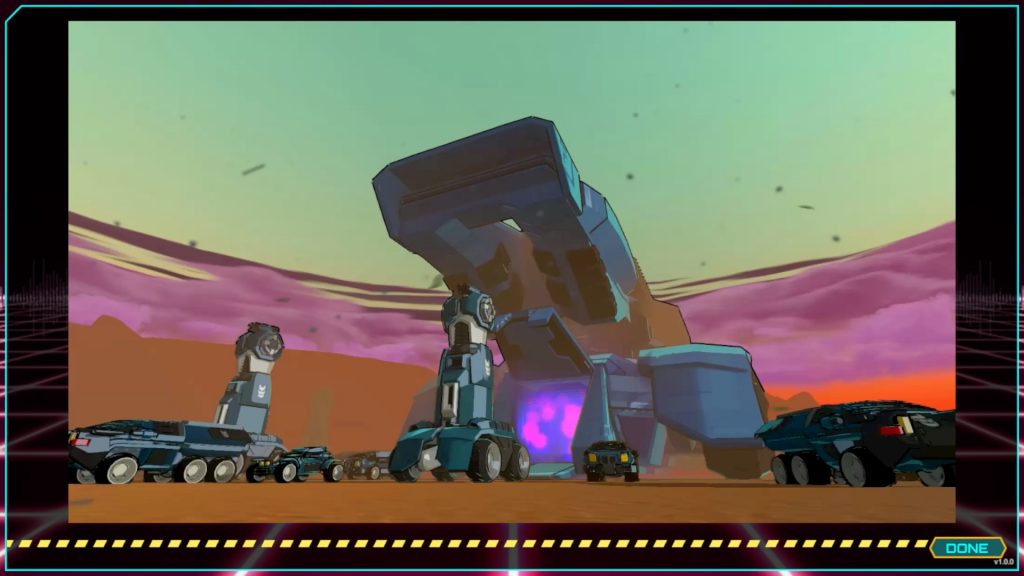 Jawling Towers. On the one hand, very easy to topple. On the other, they have some *serious* weaponry.

Flinthook, a game about a ghost headed pirate with time-slowing powers, an anchor that he uses to effortlessly hook his way around, and, of course, a blaster, begins in an extremely fun way. So many possibilities! An interesting cartoon universe, hinted at in scraps of lore and relics and enemy designs! Good sound effects and a consistent, action-cartoon aesthetic I can’t help but love! 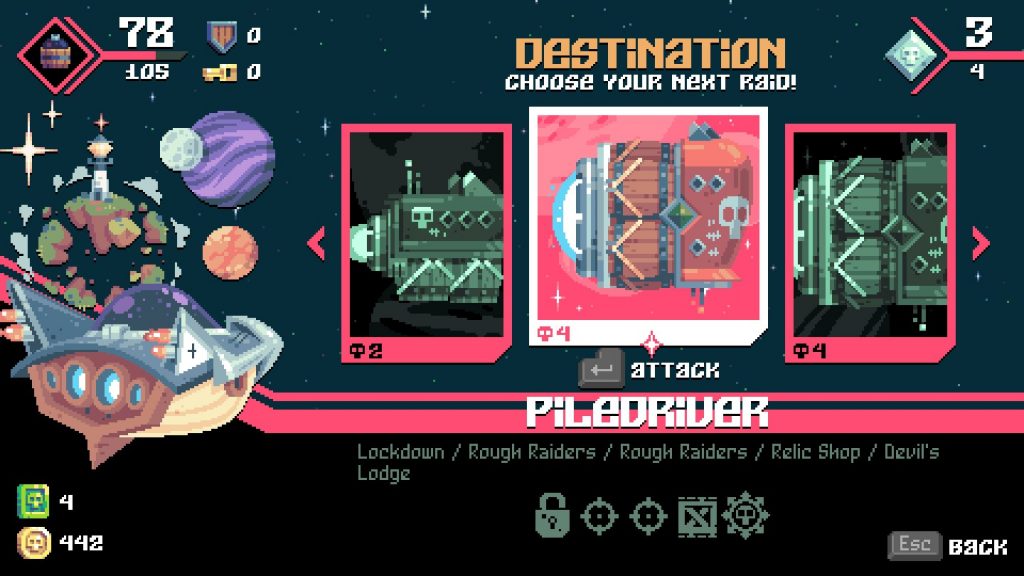 Your choice of ships to raid is, for the most part, clearly explained, and it’s easy to remember what does what. This, as it turned out, was a Poor Choice.

Currently level 39, I am, at the time of this review, about halfway through. And I feel like I owe my victory more toward grind and luck than skill, without feeling bad about it. Why? Because, from about level 20 onwards, from about three skulls onwards, the game starts throwing some distinctly unfair rooms at you. Rooms where I have yet to figure out if there even is a way to get through without taking damage. And it starts playing tricks that, honestly, I’m not on board with. Here, screenshotted, is a pretty good example: The Bird Room. While exploring the procedurally generated ship-dungeons of the game, you may come across the bird room. The birds are invincible. No, those bubbles, unlike the others you may encounter (including in boss encounters) cannot be popped with your hook. And they will poop similarly invincible bombs at you until you leave. How not to be damaged? Don’t be under them. Don’t touch them. Good luck! 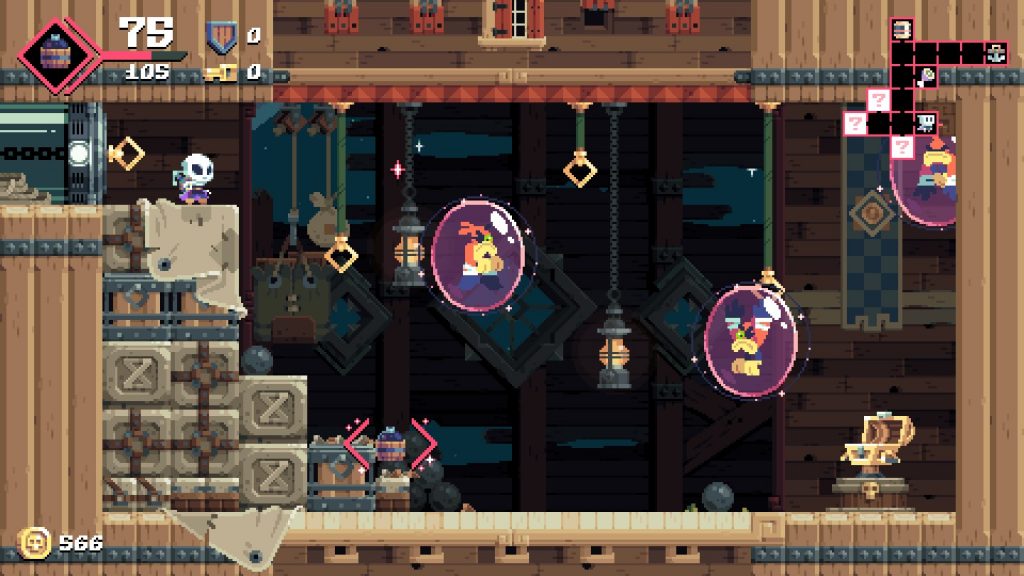 Thank you, Flinthook, for very briefly wanting me to replace my cries of FUCKING BATS with DAMN BOMB POOPING SPACE PARROTS

Similarly, combat rooms start getting, for want of a better word to describe them, dickish. And a lot of this fuckery comes from one enemy in particular: The bubble wizards. As long as these robed assholes live, everything else is invincible. And often, these same lizard wizards are hiding… behind the invincible enemies. Oh, never in such a way as to completely block them off, it must be said… But nearly always in a way that getting to them has a much higher chance of you needing to damage sponge your way to them.

Adding to this is that half the subweapons… Feel much more situational than the other half. Spinning Skulls are a finicky subweapon to hit folks with, and don’t do a whole lot of damage, the bomb barrels are for when you want an enemy heavily damaged or dead right damn now, whereas, by comparison, the freeze globe is a “Get out of miniboss/dickish trap room” card, or at least something that helps, and the Fighting Bell is temporary invincibility, which… Is also a “Get out of miniboss/dickish trap room” card. I often forget subweapons as a result, or end up with Giant Robot Crab Syndrome, where I don’t want to use my freeze globe on the trap room because I might need it for another room. 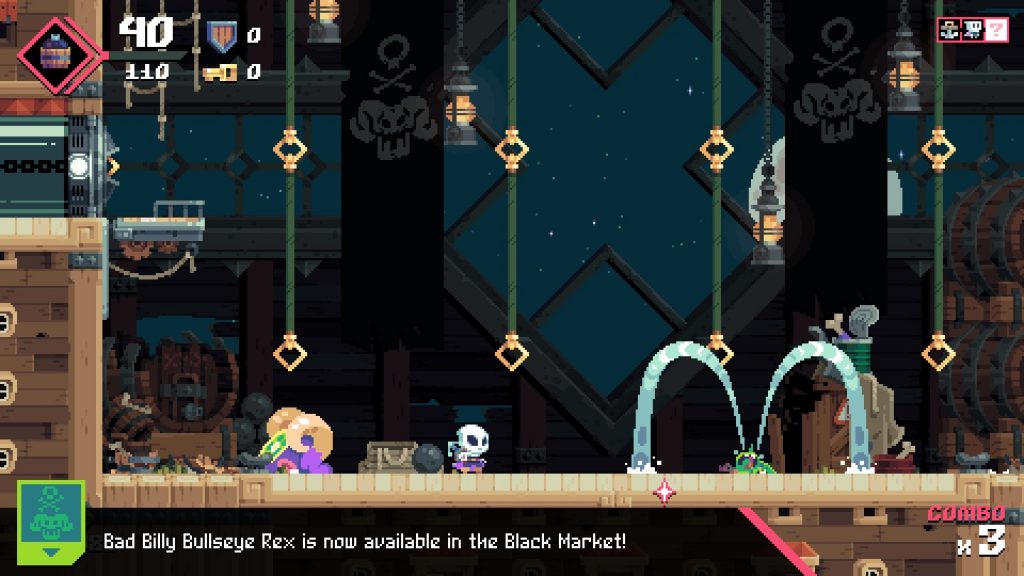 Poor Bad Billy Bullseye. This is the fifth time I’ve done this to him out of frustration I’ve died on the way to the Baron so much.

The bosses, by comparison, are… Well, actually somewhat easier. Bad Billy Rex, the unlockable upgraded form of the first boss, felt like a victory lap, since his base pattern doesn’t really change: Hook his ride’s glowy bubble butt, shoot it, and a new glowy bubble butt appears, shoot his tumbling starfish brethren that he adds each time, repeat until there are no bubble butts to pop, his centipede-buffalo pal is dead, and poor Bad Billy is left crying like the Rancor trainer in Return of the Jedi.

Is Flinthook a bad game? Not really. It uses all its abilities, makes them pretty accessible, and teaches you their use very well. But it’s a game that expects you to grind out to reach the endgame, and it’s a game where the levels, not particularly the bosses, are the real enemy. It’s pretty twitchy from even the midgame, so I sadly can’t recommend this to folks who, for various reasons, can’t play that sort of game. For everyone else, the pixel art is consistent, the UI is good and clear, powerups are explained when you get them, the music is brilliant, and the sound effects are also good. It took me about 4 hours to hit the midgame, and I expect it will be at least a few more before I’m ready to tackle the endgame. It’s a “few more hours” I’m not entirely sure I’m willing to invest, myself, but your mileage may vary, so if you like arcadey platforming and shooting hijinks, perhaps this is for you.

The Mad Welshman loves universes like this. Even if, in said universes, he’d probably end up with a glowing weakpoint.