‘Satellite Reign is similar to Syndicate.’ I’ve been seeing this phrase a lot, unsurprising, because the game was billed as a spiritual successor to that second game, made by developers who worked on it, and it does, indeed, have similarities. But it’s not a terribly useful phrase. Let me try and do things a little better for you. For extra comparison, I’ve also written a Going Back on Syndicate. The intro to the game is quite interesting, and quite fitting for a corporate overlord surveying the situation.

So, let’s go back to basics: Satellite Reign is a game where four corporate “Specialist Staff” (That’s a nice, corporate way of saying “Wetworks Operatives”, itself a nice way of saying “Professional Killers and Saboteurs”) are sent on various missions to ensure that your corporation is the one that gets to continue doing business. If you guessed this involves murder, assassination, property damage, and general mayhem, you would not only win an imaginary cookie, you’d also win a visit to [insert corp]’s wonderful Human Resources Department… Specifically the Attitude Adjustment centre, because you’ve quite clearly got the wrong idea about how the Glorious Corporation works.

It is, however, somewhat loadscreen heavy. Once the game actually begins, there’s less, but with my setup being less than optimal, three loading screens is a significant time investment once the game begins. And then the fun begins. 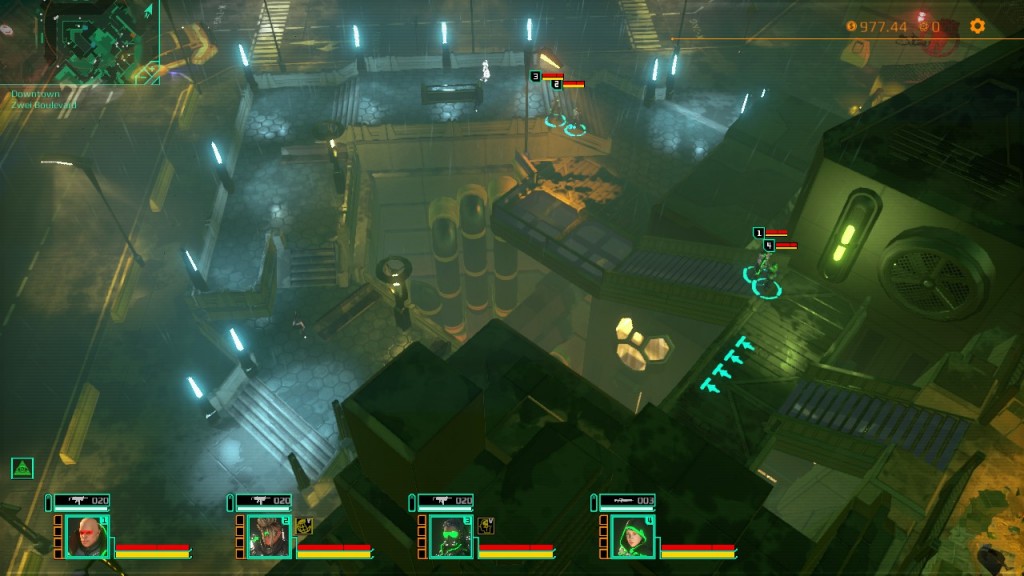 See all those dots in the minimap? People. Many of them more important than you realise at first.

Except… Once you leave the tutorial, the openness of the world works against you. The game, in a sense, resists being played. The camera refuses to move from a certain angle, despite tall buildings getting in the way, and you will be spending a fair amount of time paused in the mission control screen, poring over what you know of the map. It’s also pretty resource intensive, so it’s more important than usual to meet more than the minimum specs, or else you’re going to be waiting longer, and reacting more slowly to situations as they develop.

I have to admit, although I love me a good cyberpunk game (And, importantly, Satellite Reign remains cyberpunk until you get some serious kit. For all that you’re a rival corporation, and clones exist, you’re still only four folks), I’m not so fond of Satellite Reign. The game clearly colour codes and highlights the sorts of things you want to keep an eye on, the music is quite tense, and very fitting, but you’re in an information overload from the word go, and it’s difficult to filter that.

Do I go for ATMs? Do I rob a bank or three? Get researchers? Try and level up my agents by hacking, murdering, sabotaging and hijacking? I don’t knooooooooow! 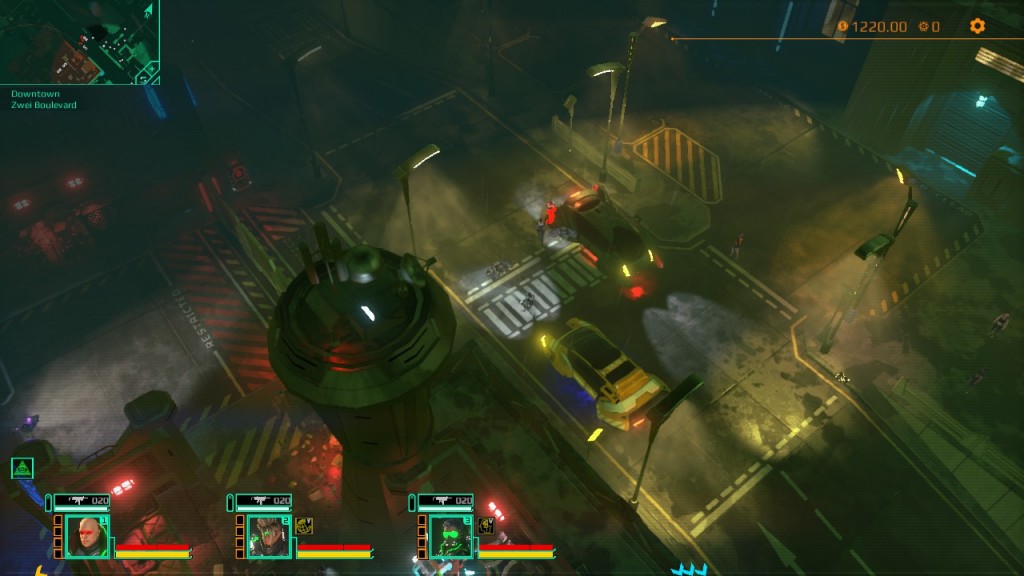 Security is no joke, even at the beginning of the game. Most of the reason I prefer stealth.

I do like that there are multiple paths through a situation. For example, the first mission, you can sneak in the back door and avoid two thirds of the security, in and out if you’re quick enough. Or you can go in the back door, gun everyone down, and leave as you came in. Similarly, you can level your agents in interesting ways, and there’s leeway even within their roles. But personally, I’m feeling lost, torn between several directions, and while that sort of fits the mood of the game, it’s not really for me. It’s a game that seems to requires multiple losses to truly master, but, unlike a roguelike, which follows the same philosophy, losing isn’t a case of “straight back in”, but loading screens and the tutorial mission. Or reloading the save.

I also like that there’s a lot going on, in a sense. Civilians, police, drones, cars… They’re all constantly moving, making for a living tapestry, and the dystopian vision is quite clear every time you turn down a side road and see rubble, and the city’s dispossesed (Who you can take advantage of). Alas, I sadly don’t think this game is for me.

If you like open worlds with lots to do, skill options, are good at squad level micro play, and don’t mind a lot of info being thrown at you, then being left to your own devices, this is probably a good game for you. If you don’t feel that real time squad combat and stealthing is your thing, then you’re probably better off with something more focused.

The Mad Welshman sat on his corporate throne, head in his hands. The synthesised voices of his agents rang in his ears, and he thought very hard of the Bahamas HR Centre.