Source: Early Access Purchase
Price: £23.99
Where To Get It: Steam
Other Reviews: Release

Way back when, when I was a snotty teenager (As much due to being an ass as having broken my own nose in gym class), I was a fan of the more obscure Games Workshop stuff. Y’know, Warhammer Quest, Necromunda, Battlefleet Gothic. Mordheim, however (Warhammer Fantasy’s answer to Necromunda), somewhat slipped under my radar.

However, when Rogue Factor and Focus Home Interactive, last year, put Mordheim on Early Access, my strategy game senses tingled a little. Here, perhaps, was something I could sink my teeth into. You will see this loading screen a lot. Less so as time goes by… But a lot right now. So you know.

For those who don’t know what Mordheim is, it’s basically “Gang Battles in Games Workshop’s Warhammer Fantasy world.” The city of Mordheim has had a rather bad Wyrdstone problem of late, and, since Wyrdstone is as useful and powerful as it is dangerous, the majority of citizens have left, and treasure seekers have moved in. Specifically, the Sisters of Sigmar (A somewhat heretical cult that nonetheless wants to confine the threat of Wyrdstone), the Skaven (Mutant ratmen who use Wyrdstone for various purposes, nearly all of them violent and/or immoral), the Cults of Chaos (Wyrdstone is valuable to the Chaos Gods and their worshippers, due to its mutagenic and magic enhancing properties), and the Empire (Who basically are in it for the money, don’t particularly care about Wyrdstone, and would happily slaughter any of the other factions if there was a cut in it for them)

Of course, you can guess by the fact you’re reading this now, rather than 2014, implies that I didn’t think it had come far enough in development to really get a whole lot said, and that… Has now changed. Because progression and persistence have now hit Mordheim, and my gang can finally live or die on their successes… Or failures. So, to test this update out, I went for the Moustache Twirler Option: Skaven. The grandiose cravens, with their backstabbing, ambush tactics, and dirty tricks like poisoned weaponry were, obviously, right up my alley. It helped that if I failed, I could blame my underlings, much like Skaven do in the setting. 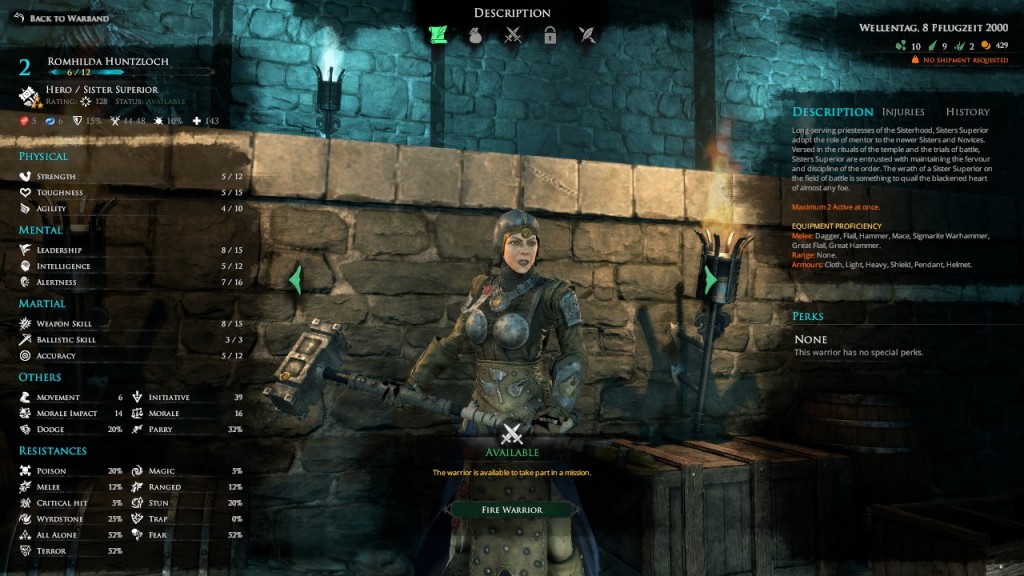 Some of the models are lovely, even if this one made me think “Did Bavmorda nick Sorsha’s kit for some reason?” Note the relatively sensible armour choices.

Some things, sadly, haven’t changed overmuch. I made a cup of tea between picking my warband and the interface loading up (They joke that “Chaos Is At Work”, and the loading times have improved since the start of the Early Access… But it’s still not a game for the impatient), and almost immediately had troubles working out how to hire folks (Double click the icons for that kind of warrior is how you do it.) But once I’d gotten that UI niggle out of the way, I got stuck in.

My first mission was a success, of sorts, although not an overwhelming victory. None of my rats died, but I routed the Sisters of Sigmar before I could collect enough Wyrdstone to fulfill my optional objective. Still, considering that the Sisters tend to wield large hammers, and none of my somewhat brittle rats died, it was a plus. Still a plus was the decision by Rogue Factor to turn each unit’s actions into… Well, running through the world. It’s slightly abusable, in that you can retrace your steps to regain movement points, which lets you explore slightly more than is perhaps sensible… But a counter to this is the fact that, if you move unwisely, you’re going to get ambushed and lose all that movement. Indeed, as Skaven, I’m somewhat counting on getting my hits in first. The primary objective is nearly always to rout or try to murder the opposing team, but there’s a couple of side objectives, including bounty hunting (Put a specific unit Out of Action) and Wyrdstone collection (Usually 50% of the stuff that’s on the map) 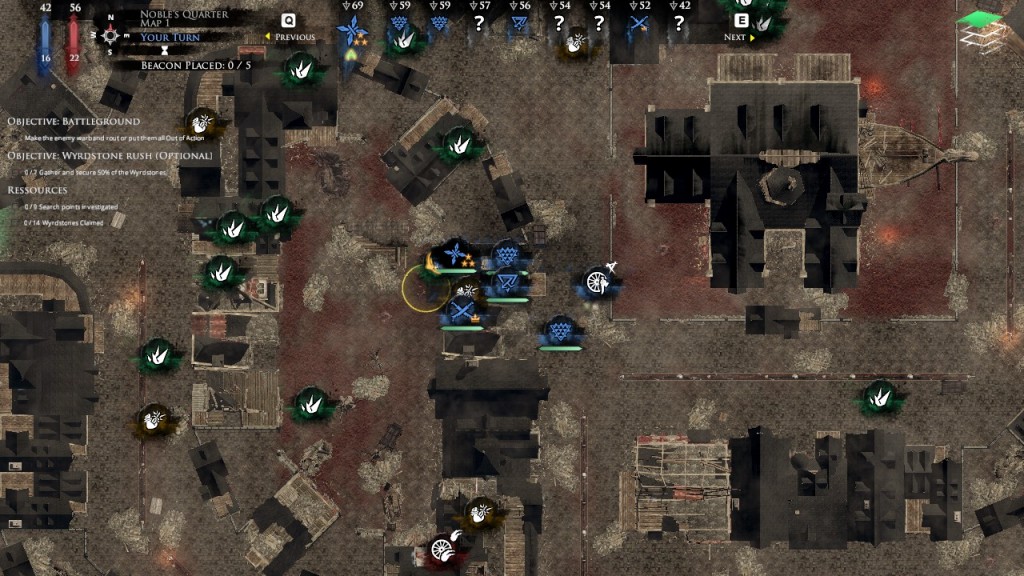 The map will give you *some* idea of what’s around. But only some. Don’t *rely* on it.

Of course, if movement were the only thing you had to watch out for, I’d be a bit worried. But fighting also has limits, based on the skill of the units in question. For example, most skaven have three Strategic Points (for Ambushing and Fighting), but the Hero and the Leader both have 5, allowing them, in a straight up fight, to attack twice a turn. Turns are initiative based, and… How does it feel?

Tense. Very tense, since the maps are procedurally generated, as are resource locations and the start points of your units. Your worst nightmare is to become scattered, while your enemy is cohesive. It generally means, for most groups, that you’re being ambushed and piled on instead of the other way around. And that’s a bad thing, since getting a key unit injured early on can lead to big problems. Good example, the mission after I’d been told by my Clan Lords to send them a hundredweight of Wyrdstone, and I had ten days to do it… My leader got taken out by the last attack from the leader of the Sisters battlegroup I’d been facing. Because units cost upkeep, and injuries cost for treatment, this meant I had 4 tense days, hitting the Next Day button. I knew he wouldn’t die (He had, in fact, gotten a Near Death Experience, which was one of the few relatively beneficial options), but that was time I wasn’t gathering Warpstone… Fail to do that 4 times in a row, and your warband is disbanded. Permanently. 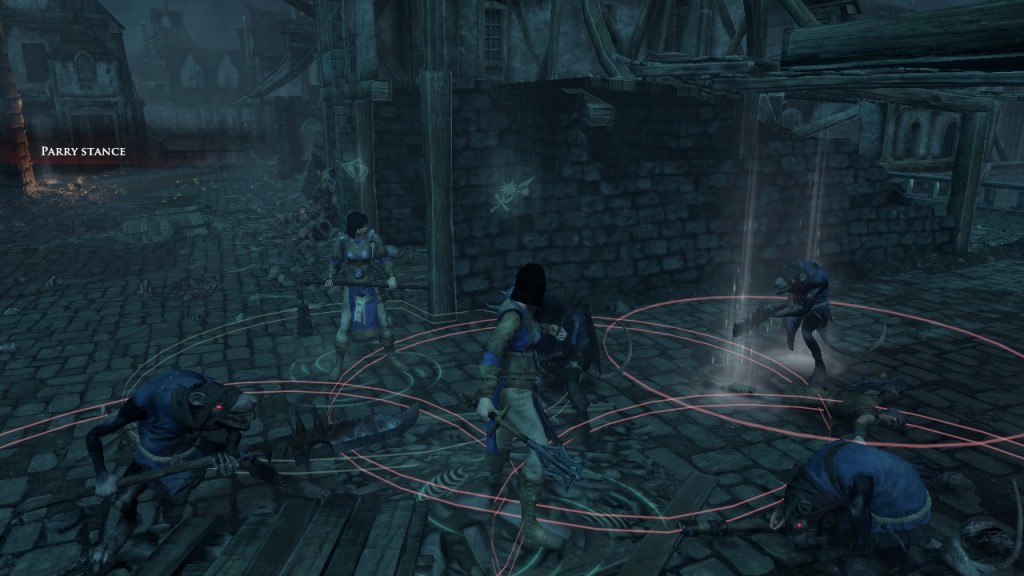 This… Is a bad situation to be in, especially if you’re wounded.

On the upside for me, but perhaps not so much for the developers, the AI, while still improved, can still be outthought, usually with picking good ambush spots. In the AI’s (or another player’s) favour, however, is the fact that while you can sometimes hear units close by, you won’t know where they are for sure until they come into view. If they go out of view, their last known position on the map is an icon with a question mark… But that can only help so much, since you don’t know how far they’ve already moved before you saw them. Thankfully, sooner or later, they’ll run into ambushes, and then you can swarm them. Fair fights are not the name of this game, especially if you’re the Skaven. In fact, fair fights in general are somewhat of a bad idea, due to the AI having a health boost that… I’m not entirely sure they need anymore.

Multiplayer, when I can find someone, is a more challenging experience. On the one hand, I’m matched by point value. On the other, that doesn’t mean I’m matched by skill (Sadly, a common flaw in games like this, and one I haven’t really thought of a good solution to). Many a skilled player doesn’t mind going back to the beginning, but, as much as I can’t predict the opponent’s skill level, I can, within certain limits, guess what they have. And, in the early game at least, it’s going to be somewhat similar to me. Levelling up is a somewhat slow process, costing experience earned from battles, time, and money (100 gold per level 1 skill, and a day or two training), so if I see a Leader with a Great Hammer, I can somewhat bet that they’ve taken something to hit me harder with. It’s not a flawless system, as there’s quite a range of possibilities for builds (I’m currently going with “Skaven wot hit hard when they ambush”, although I expect to branch into “Also we poison the hell out of you” as soon as my balance allows it), and y’know what? I’m liking it so far. I should also mention the aesthetic: Grimdark. Dissonant choruses, blaring horns, and the occasional scream assaults my ears (Pleasantly), while pungent gases afflict me and the streets are ruined, covered in grime, slime, and… Was that a screaming face with an eyeball in it, melted between the wall and floor? It was! It fits the game perfectly, but will look over the top to people who haven’t encountered how over the top Warhammer can get sometimes.

If you want to have a go at a turn based strategy game with some interesting ideas about making it not feel quite so turn based, don’t mind those loading times (1 cup of tea per transition, I’ve found, although your mileage may vary), and don’t feel barraged by numbers (The tooltips help there somewhat), then this might be for you. If you’re not a fan of grimdark, not a big fan of timesinks, and don’t like the idea of turn based strategy, even dressed up, then it’s a probable “No, thanks.” Just be aware that yes, it is still Early Access, so glitches, bad collisions, and odd camera angles still abound… But it’s showing a lot of the promise in the game already.

The Mad Welshman stab-kills many electronic man-things in the course of his work. The tail is artificial, and he does not work for the Great Devourer. No. That would be dumb-silly.