Source: Early Access backer
Price: base price £14.99 (Sale going on right now)
Where To Get It: Steam Page , Official Site

Start with two, maybe get four. Stun *all* the guards.

Even as a member of the awesome technological rebellion that is Invisible, Incorporated, I feel sorry for the security. One poor soul has been tazed for the third time in a row, and is no doubt thinking he might want to seek out a medical professional for what is obviously narcolepsy. I can’t feel too sorry, however, as the IT department of this particular company seems to want to eat my babies. This is just one of a large set of feelings I have for Invisible Inc, the latest offering from the creators of Mark of the Ninja, Klei Entertainment. Most of these feelings are positive.

The game boasts that it has 2 animated cutscenes, and I must admit, when I first saw that boast, I was leery of the release product (I’ve been following it since it debuted on Early Access), but my fears were put to rest within minutes. You see, the atmosphere in this game doesn’t depend on cutscenes. It depends on emergent stories, and I’m happy to report that what’s under the hood matches the aesthetic and themes of the game really well. So let’s go into that. 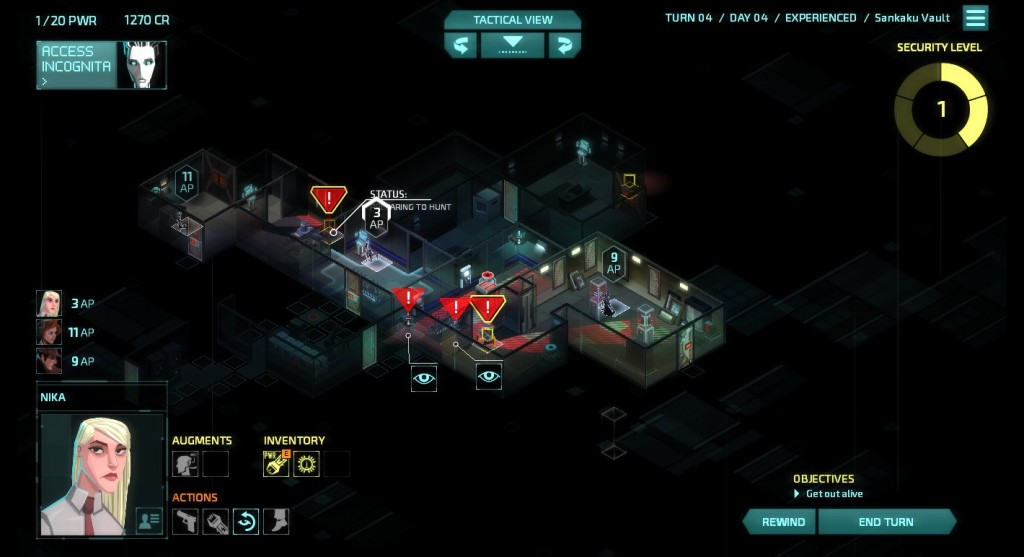 Sometimes, it can go horribly, disastrously wrong. And by god, it’s entertaining!

Invisible, Inc, despite its name, is not about a Syndicate like corporation, smashing all before it with soulless, mind controlled soldiers. It’s cyberpunk as all get out, and II are the little people, fighting back against the corporations that sought to stamp them out… And almost succeeded. The game’s premise is that the few free members of Invisible Inc are on the run, and have 72 hours (3 days) to, if not win their fight against such entities as Sankaku, the droid centric Japanese corporation, or the German arms supremos, [insert], at least kick them where it hurts. And all we have for that is the means to quietly slip into corporate buildings, a friendly, but limited AI, and not very much else. While options open up the more you play the game (characters who are better at killing, characters who can disable machinery, more hacking options), and you will get more powerful if you play your cards right, at the beginning, you’re up against it, and the clock is ticking.

Gameplay wise, it’s turn based, squad level strategy with some RPG elements. Two to four agents infiltrate a building, either beat down, hack, or avoid security measures, and try to both rob the place blind (Your finances and levelling up are dependent on this) and complete their objectives. And it’s pretty intuitive. There is a tutorial that gives you most of the basics, and the rest is quite helpfully shown in tooltips, in one of the three vision modes you can quickly switch between. And here’s where it gets fun. 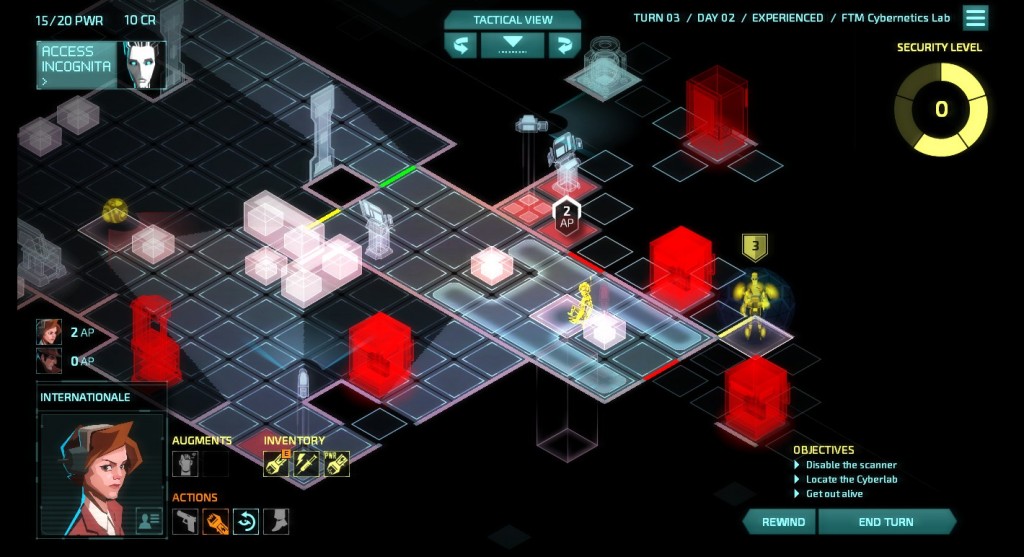 Tactical View, where the necessity of hacking that one camera drone becomes so very clear.

See, Klei thought their design through, and it shows. It’s isometric, but not only can you rotate the view, you can switch to “tactical” view, which reduces the clutter, or “Incognita Mode”, which is where all the hacking takes place. It’s a risk reward game, where rushing will, done well, ensure the steadily creeping Alarm Level of the building won’t screw you over at a critical moment… And, done badly, will quickly and efficiently see you cut down, your cause lost. But there are very few moments where I’ve put down my keyboard and muttered “That was bullshit”, and, on reflection, most of those were definitely my fault. Like the time I went for a safe that I knew would take more to get to than the three turns it would take for the guard to wake up… And neatly trapped myself, with no backup because I split my agents too often. Or the time I hacked a camera drone, and realised afterward that it had nowhere to go.

Stacking the deck either way, allowing you to fine tune your experience, are Rewinds and Expert Mode checkboxes. Rewind modes are your “Oh sod, I didn’t mean to do that” button, allowing you to turn back time… But they’re a limited resource, adding a layer of tactical depth that remains intuitive. Meanwhile, expert mode restricts you in challenging ways, like adding a turn timer (Oops, now you can’t just sit back and think about it, because there’s ten seconds left to do something aaaaaaaaa-nuuuuu!), or making enemies harder. At its base level, though, the game encourages stealth over violence. Killing most guards will not only up the security level, it’ll cost you money, and that cost… Can quickly ramp up. Add to that that ammo is not always a guaranteed find, and… Well, it’s better to be dodgy, or sneaky, than to be violent, is all I’m saying… And I love it. 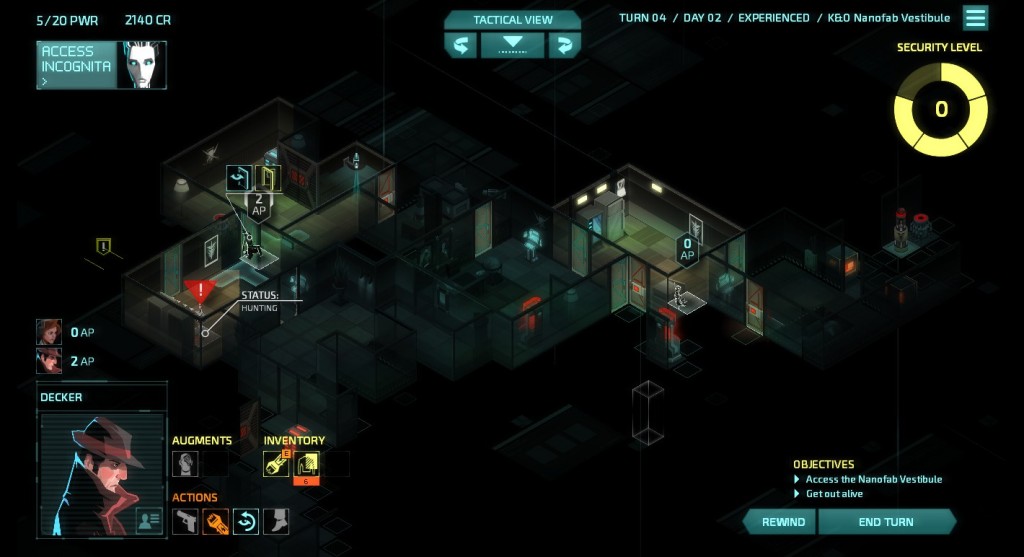 Do not do this unless you are confident each agent can handle things.

You’ll love it too, if you like turn based strategy and cyberpunk, or roguelikes and cyberpunk (As the levels are procedurally generated). If you’re not the patient type, however, or strategically minded… Don’t say I didn’t warn you when I say this game definitely wants you to think really carefully about whether you want to hack that Daemon protected safe open, or try and knock out that guard.

Invisible Inc released on the 12th of May. A camera droid is watching me write this review, and it’s creeping me out a little.