It may come as a surprise that this is a going back, considering my long held opinions on the state of Hidden Object Puzzle Adventures (Often bad with colourblindness, puzzles that make no sense in the context, extremely thin story that doesn’t have a great track record with treating women well, despite being marketed to said women for the most part), but this one, I feel, deserves it for, at the very least, being less egregious about it. In fact, I’d go so far as to say the game is enjoyable. So let’s unpack that. 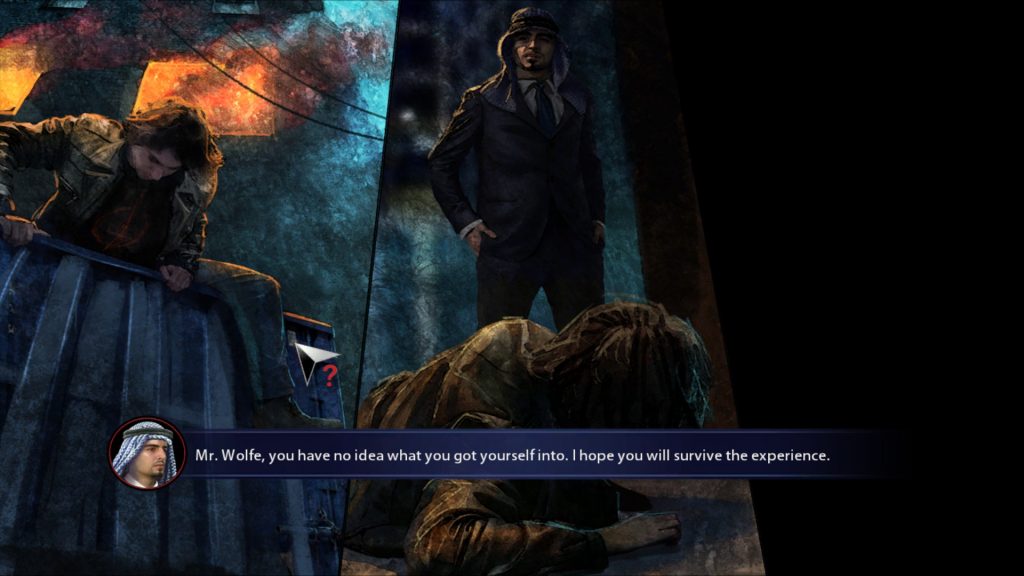 This is, surprisingly, not quite how it seems. And a reason why I’m somewhat fond of Episode 1.

Adam Wolfe is an episodic hidden object puzzle adventure game… Which seems to tend more toward the adventure end than the hidden object end. Why? Because every puzzle I’ve seen so far has context, even if the puzzles, on closer examination, can seem a little silly, and a few have colourblindness problems. Can’t win ’em all. The final episode was released in November 2016, and I was approached to review it last week.

Episode 1 is a pretty strong start in many respects. The only traditional hidden object puzzle is, amusingly enough, when Adam tips out the junk from moving (Including, for some reason, a pizza box… For shame, Adam!), and this is somewhat less traditional in that it has a strict order, as Adam recalls various things. Still keep only one item, but fine, like I said, can’t win ’em all. The rest are more like forensic puzzles, in which Adam uses a mysterrrrrious watch to try and recreate crime scenes. He doesn’t even get all of them right, in the end, which is a nice touch. 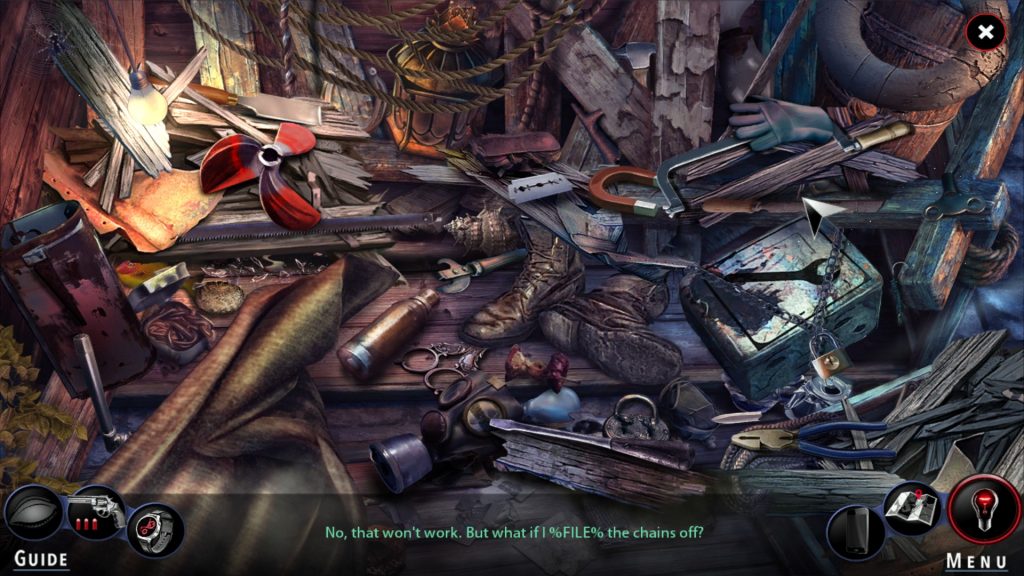 There is a reason, later on, I say this should have been spotted before release. No other episode does this. Also, the file is above the lockbox. See if you can spot it.

But Episode 2, sadly, brings things back to form with a hidden object puzzle where not only are objects, unlike the other episodes, clearly a little glitched (“I’m looking for a %FILE% to do the thing”), there is a puzzle where Adam Wolfe finds a variety of objects to try and open a small lockbox, before eventually settling on the only one that works, a hammer. Adam’s an ex-cop. Which makes this hidden object puzzle, again with its strict order, all the more heartbreakingly stupid and obvious padding. Oh, and that file wasn’t visible without a guide, another common problem with HOPA puzzles.

The rest of the episodes, though, seem fine, for a HOPA… And this is where I go back to a macro-view of the game, because it’s more important to clarify what goes well, what goes the same, and what’s flawed, to highlight that, for all its flaws, Adam Wolfe is a step forward in terms of Hidden Object Puzzle Adventures. Firstly, the story, while another supernatural mystery, is specifically patterned after supernatural mystery shows, taking the episodic pacing cues from the genre, along with a more action based story which makes sense in the context. The cast gets less diverse from Episode 2 onwards, sadly, but considering how often HOPAs don’t really write characters well at all, especially women and folks of colour? I’m actually okay with this. I liked that the villains are all white men, effectively. I liked how most of the characters feel like people, and not just “Plot Device X” (I’m not saying all, but most. Some really are just there to be obstacles or exposition.) 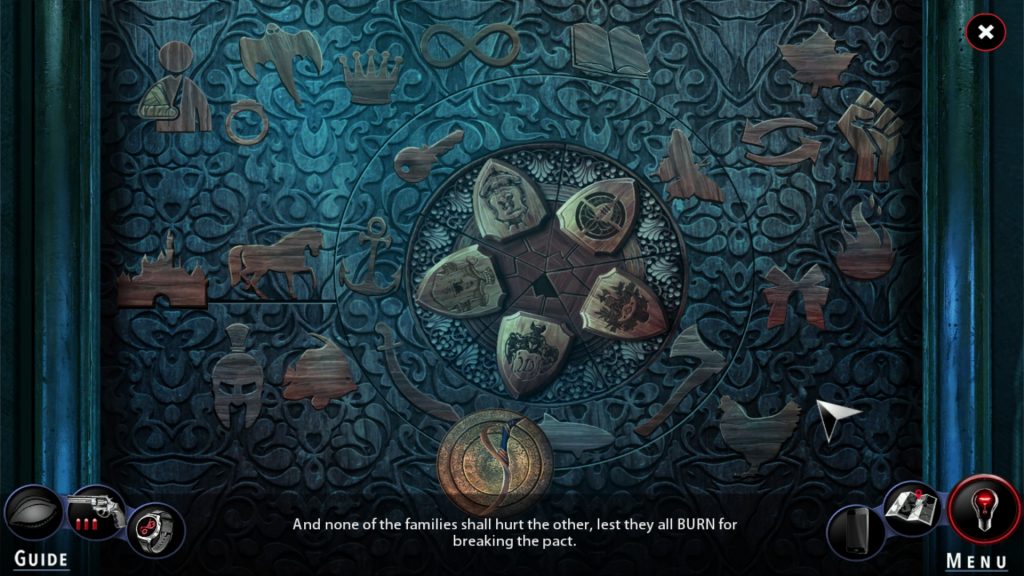 Yes, there are still highly silly puzzle locks like this. But, again, they’re less egregious, and more often, this kind of symbol hunting is restricted to, for example, a ritual binding.

Similarly, it’s a step forward to limit the magical protagonist power that all HOPA protagonists seem to have (Never explained, never given context) to the magical end of things (Rituals, spectral signatures, bindings.) The puzzles still feel a bit silly, but they’re less silly than “Oh, hey, a drawing of a bat, that’s exactly what I’m looking for!” It’s good to see this experimentation, like “I need to collect things that make up one object”, rather than “I am going to collect all these things, and keep one object” (Which, sadly, still happens in Adam Wolfe too, but is at least sometimes given context. Baby steps.) Equally interesting to see are the QTE segments. Now, yes, QTEs can be good or bad, and Adam Wolfe’s are mostly in that middle ground of “Clunky, but entertaining”, but, again, this is a step forward. This is something new, being tried in a genre which, as a whole, prefers to crank out three a year of the same kind of thing.

Again, some of these puzzles could have been more clear (There’s rarely consequence for failure, but it does lead to some irritable clicking or mouse moving when no, you’re not told what to shoot, or you’re shown glowies when you’re actually meant to continue to shoot the bad time-wizard, or the like) and hints aren’t always helpful, but, in the end, here’s my summary of Adam Wolfe: For all that it still has some flaws of the HOPA genre at large, it experiments, it tries to emulate a genre of media and mostly succeeds, it tries to give puzzles context and change up the puzzle format and at least half succeeds, and it does enough interesting things that I am perfectly willing, despite my dislike of the HOPA genre’s stagnancy, to say that this game both deserves a playthrough, and this Going Back article. It’s not an amazing game. If it weren’t for episode 2’s highlighting of flaws and bugs that should have been noticed before release, I would say it was a “Highly enjoyable” game (In-between Good and Great, if you’re curious.) But it is by no means a bad game, and I would say that other HOPA developers, current and prospective, would want to look at Adam Wolfe and consider… 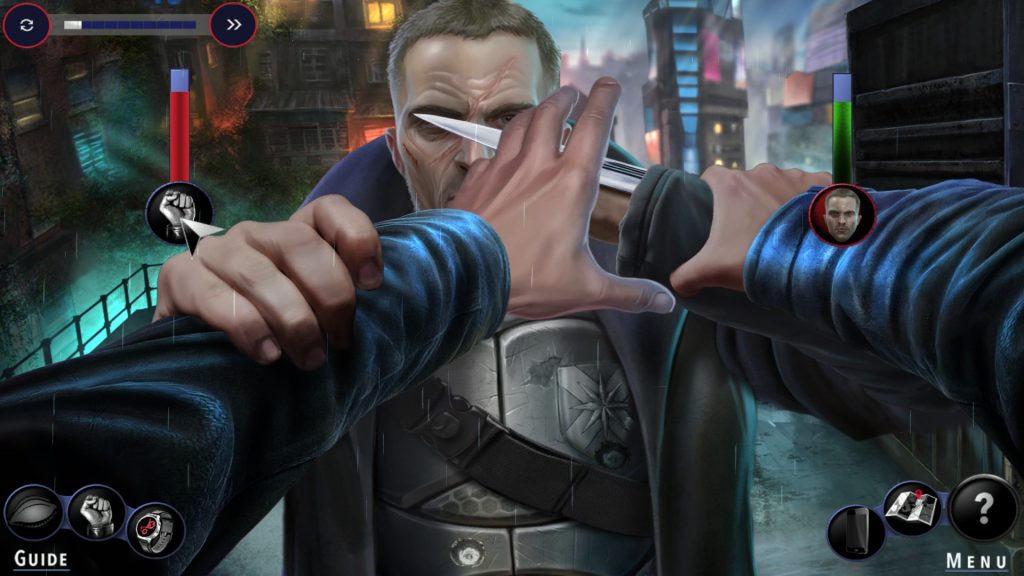 I couldn’t really leave this review without a screenshot of one of the fight sequences. Okay, yes, it’s not quite Super PunchOut. But it didn’t *feel* bad to play, and I am content with that.

“…Hey, this guy who dislikes HOPAs is saying the word ‘like’ more, maybe we should ask why?”

The Mad Welshman cannot peel hamburgers off adverts to feed his constant hunger, why should a HOPA protagonist have it any easier?