Emily Is Away (Review)

Source: Free
Price: Free (Donations accepted)
Where To Get It: Steam Itch.IO (The latter has details on donation)

Emily Is Away is a game that can make you uncomfortable. In fact, as I’m writing this paragraph (I don’t write these things all in one go), I’m staring at the login screen for the third chapter, after 15 minutes, thinking very hard about what’s just transpired. I’m not entirely sure I want to continue. But obviously, this is a review about a game that isn’t “fun”, but needs to be talked about, so… Later. 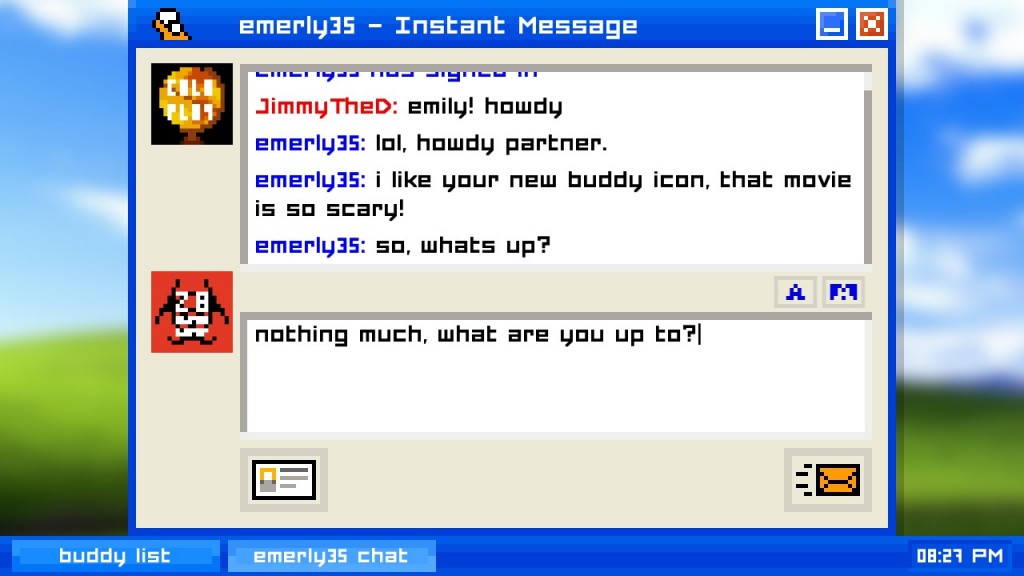 “Nothing much” is going on. And yet…

[Later] Damn, that was just as harrowing as I thought it would be, two chapters in. Time to talk about it. Because talking is the core of the game, in a sense. In another sense, it’s about not talking. About the things you don’t say as much as the things you do. About pain. And, to me at least, a reminder of what an asshole I was in university (College to american readers.)

If you’re expecting something flashy, something glitzy in this donationware game, think again. This is set in the age of AOL Instant Messenger, and shitty icons and blocky text are the order of the day. And it’s all messenger. It’s all talking, and hitting the keys to type the words that your avatar in game actually types. And I find it both very clever, and harrowing, to type myself to make those words appear. It makes me feel complicit. And I don’t mean that in a good way. I am responsible for those words, even in that fictional world, and it hurts. Theoretically, I could play this multiple times (It took me just over half an hour the first time), and there are multiple things that could change the story, but I want to talk about it as it stands. And I’m going to do it by talking about relationships. 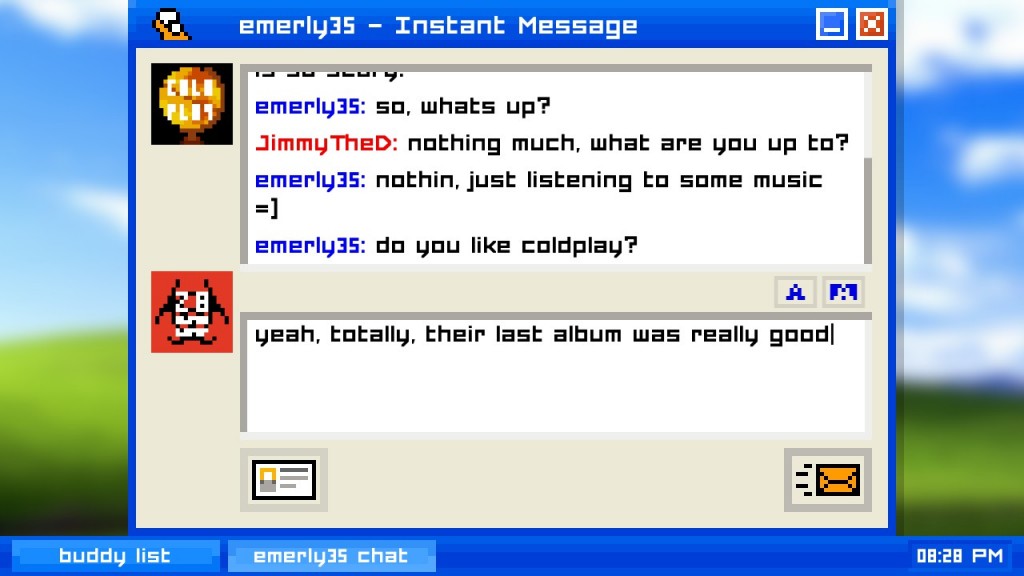 Relationships can seem easy to many, but they’re not. Even keeping a friendship can involve a surprising amount of work, but it’s work we do gladly because friendship is, in a very real sense, its own reward. But this applies even more so in bad times. In bad times, we may find ourselves asked to give more than we receive in a friendship, and sometimes to do so in a way that, in the short term, risks losing the friendship. Sometimes we’re not strong enough, for whatever reason. Sometimes, Things Happen. And Things Get Awkward. And trust is broken. Trust is important in relationships, especially if you genuinely wish your friends and loved ones the best.

This, folks, is a game filled with the pitfalls of real relationships. And what you say may have little bearing on what happens. Eventually, either Emily will be Away… Or you will. And it’s only the voice of experience that told me how bad things would be so early, and that knowledge, unfortunately, makes this game more affecting. In this case… I was the one who left. The words that needed to be aired never were. And I won’t play again (Although I’m sure regret over my fictional avatar’s situation will force me to play “What If?” later), not because this isn’t a well written gutpunch of a game, but because I want to hold on to that feeling, despite the fact I’ve experienced it personally before, on both ends. The same feeling my fictional avatar seemed to be afflicted with toward the end, where he wanted to say things… But didn’t, instead writing inconsequentialities while the elephants in the room (Multiple elephants) stared fixedly into his brainpan, before awkwardly saying that he had to go. Wondering where it went wrong. Wondering why he can’t say those words. Wondering, while secretly knowing, whether things will ever be the way they were. 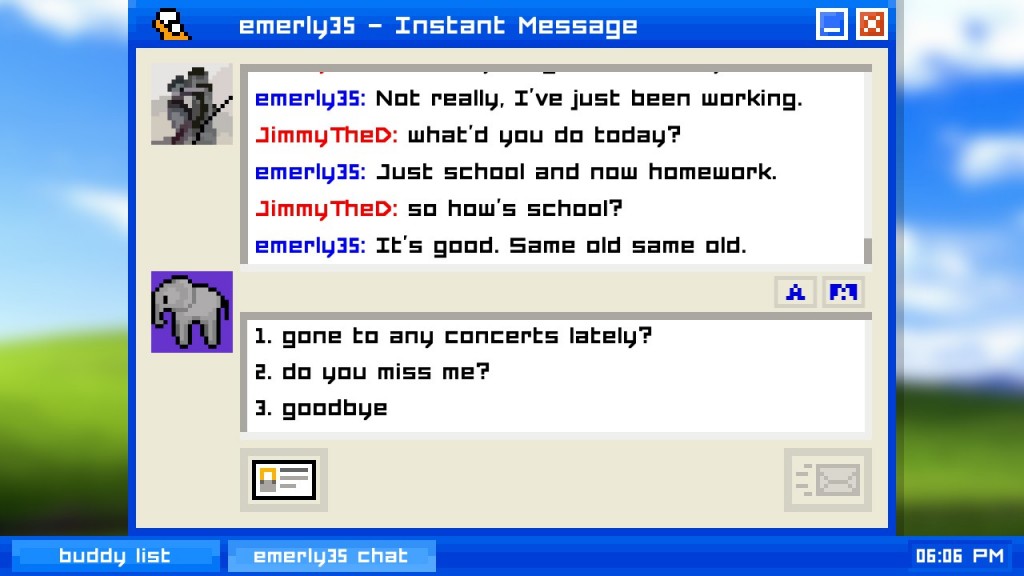 …Of course, by the time it’s reached this point… It’s too late to say *anything*

I won’t recommend this game to people just seeking “Fun.” It’s not. As soon as you realise the threads that simultaneously bind and tear apart these two people, the feeling of losing control, you know, instinctively, that Fun isn’t on the cards. But if you want a well written, emotionally affecting game that, in its way, talks about not talking, and bad relationships (Whether starting bad or going bad), you have a winner. If you want a game that makes your heart ache, and think very seriously about how lucky you are to have the friends you do… This game is worth playing, and very possibly worth a donation so the creator can make more.

Okay, that’s the end of this review. Goodbye.

The Mad Welshman Is Away.