Afterlife Empire, developed by Autobotika, and published by The Fine Young Capitalists, is a sort of expanding tower defence type game, where the afterlife apparently involves scaring the wits out of anyone genre unaware enough to visit (Because Fear = Belief, and Belief = Life/Power for a ghost), and expanding your home, while scaring away troublesome exorcists, policemen, and assorted busybodies (who reduce belief in death threatening ways.) It has some interesting ideas, but… The execution could do with work. A fair bit of work. Let’s begin with the loading screen, and what appears to be one of two pieces of music for this game. 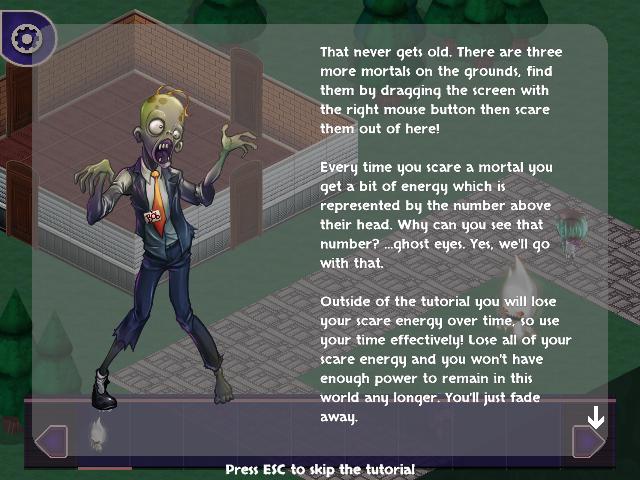 The tutorial messages, while helpful and skippable, also have the chance of you not being able to remind yourself of something you missed.

The loading screen tips are, for the most part, helpful, but there is one in particular that feels less helpful, and badly worded. “The Authorities notice when people die in your mansion. Yes, even the ugly ones.” Nobody appears particularly ugly, and… Do ghosts even have a preference there? Is “ugly” people fear less useful somehow? Do they have preferences? I couldn’t be sure, because of a core problem. The music needs equalisation, as instruments vie with each other for the top spot, volume wise, in their simple melodies. I turned it down (but not off), because… It vies with the game as well. The warning music does its job better, but… Two short loops for music make me feel… A little hollow while playing. And not in the mood enhancing way.

The UI. Not the UI in general, it’s mostly does its job. I like that I know what threats are coming from roughly where. I’m less fond of the tiny scare indicators… But I’m specifically less fond of the tooltips, or, more accurately, the lack thereof. The game provides little feedback (Except on powers, where it gives you a rough idea of what you do via the tutorial messages), and I cannot tell without a notepad which props are more or less useful for their price, beyond “More expensive = Good”. While, on the one hand, this could accurately simulate a ghost who knows nothing, the tooltips, frustratingly, never really appear. A new player won’t know what a scare trap does without trying one (Does one generate more fear than another? Don’t know for sure. I know what area of effect they have, but it always appears to be “The tile next to the object.”), just as they won’t know with props. 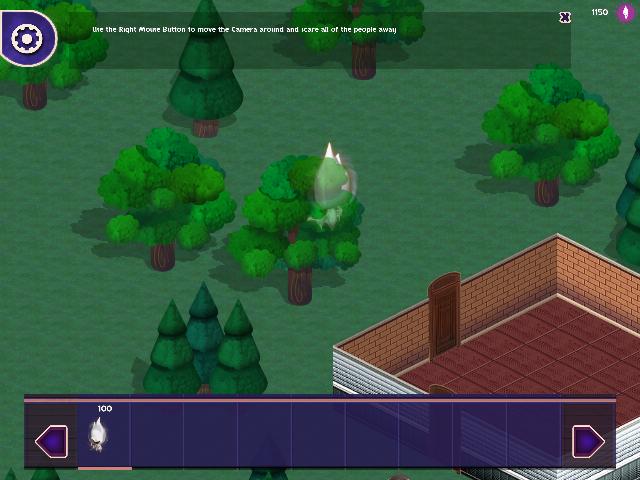 This becomes *less* of an issue when the game begins. But remains an issue which camera rotation would help with.

The tutorial is mostly fine, but does highlight a couple of problems. For example, camera and object rotation (And, for that matter, moving or deleting objects that are poorly placed). If there is any, I couldn’t detect it. Yet, for all that it’s usefully highlighted that one of the people I need to scare off in the tutorial is behind a tree with a tutorial path, nonetheless, they are behind a tree. Similarly, when placing props, not being able to see them to place them is a mood killer. As is not being able to place them because something I can’t see is obstructing them. For this, I recommend cutaway walls or some form of X-Ray technique. It’s very useful in an isometric game. Being able to scroll back on messages is also a good idea, and an encyclopedia of enemies might give both an incentive to proceed (Currently sort of lacking) and a means of remembering who does what. Sadly, neither of these things currently exist. The medium section, also, has its problems, as I failed to kill her by scaring her twice before she ran off the map, which… Meant she respawned, standing still, at the edge of the map. Thankfully, there was no power cooldown, so I just clicked twice, but… That’s something that should be avoided in tutorials. A tutorial should be a controlled experience.

Aesthetic wise, the models are nice. I can tell a civilian at a glance (Although apparently there are different kinds, and that’s less clear), and immediately tell them apart from an exorcist, a policeman, or any of the other folks who modify the score or threaten me in some manner. They tend to shuffle around quite slowly (A boon in the case of the exorcist, who drains your fear much faster when in the house, cleansing it), but they look fine. So do the tiles, the trees, and the walls. The props, though, I’m less enamoured of. 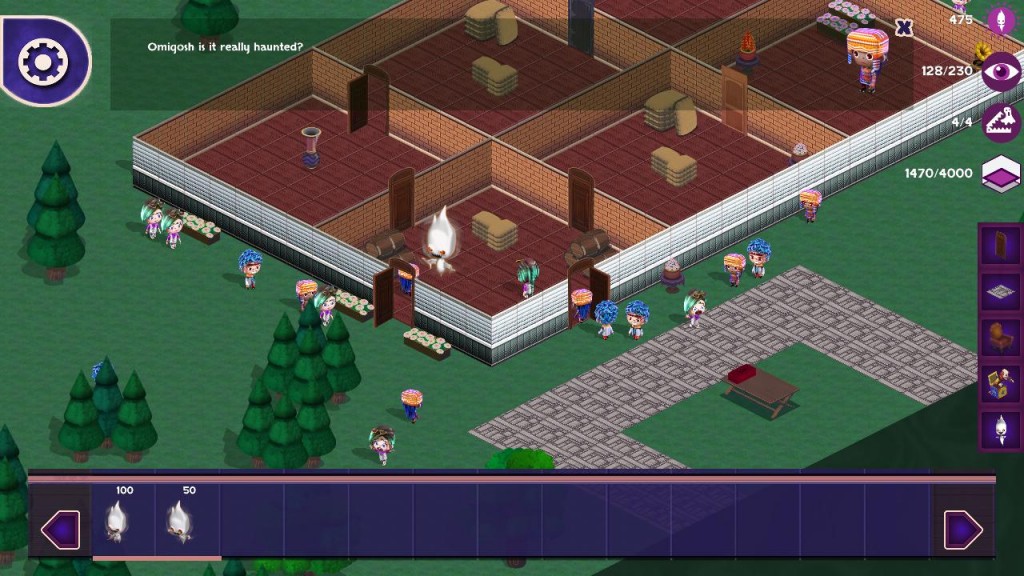 A fairly stable house design. Limitations mean the house isn’t going to be very houselike, though.

I understand that what we start in is a dingy shack, and that we “gain more powers, props, and traps as you level up”, but I couldn’t find a single prop that was furniture at the beginning. Not even a tattered chair, table, or one of those cheap replicas of the Dogs playing Poker paintings. It’s a disconnect, and an obvious one. It does get better, but that was after the first ten minutes (Counting the tutorial), and the first ten minutes of a game are important. Especially with refunds on less than 2 hours of play now being a thing. Freezing the arrow scroll controls when in building mode also feels like an odd decision.

Finally, we have sound. Not everything makes a sound. Our ghost, in the title, silently mouths/laughs/screams at us (And sometimes laughs eerily when using his first power.) The props make no noise as they spooookily move of their own accord, and while people make sounds, they tend to only be a short, sharp scream before they run away. Those screams tend to wear thin after only a short time. 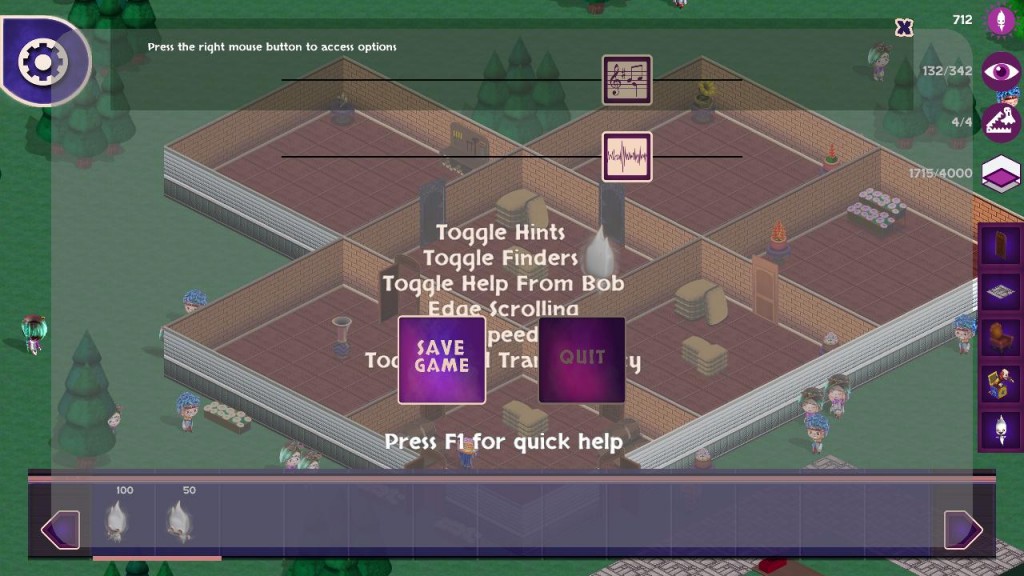 Consistent UI placement is a common first time developer problem. But once noticed, it *can* be fixed.

And all of this was noted in the first ten minutes of play. I’ve tried to play since then, but a lack of many forms of feedback a game generally contains means that, despite the tutorial explaining the basics, the game feels both incomplete, and an exercise in trial and error. I eventually got the hang of the core concepts, and things slowly get better and more varied, but, in short, it feels slow, dragging, unchallenging once those concepts are mastered, and incomplete. I don’t really feel much incentive to expand, as I can seemingly scare many people off with a single trap centrally placed, repeating this in adjoining rooms to make sure, and I don’t feel much incentive to open more doors to the outside, especially to the back, where it becomes easier for an exorcist to sneak in the back (Despite the handy notification that there are troublesome folks on the map). Loading a save resets the map’s population, but, and I’m guessing this is unintentional, so does hitting escape after you’ve right clicked to remind yourself what a power does (Also setting your power to 1000, which I suspect is due to a missing event flag.)

So that’s Afterlife Empire. I applaud the effort, but feel that the game needs a fair bit of work at the time of review before it could be considered a finished game. I hope those suggestions and pointers help the developers.