When you’re a data daemon down on your luck, sometimes even the shittiest of opportunities is a godsend. So it is for Elijah Gale who, having blown his last paycheck on a data daemon race, gets thrown into the world of… Rhythm racing hacking?

Bloody techno-capitalism, making programs that make no sense to the uninitiated…

Joking aside, Sequence Storm is, as noted, a rhythm racer, in which you are juggling inputs that race toward you, hitting them (or holding them) at the right times so as not to damage your racer, and do jobs for corporations. Although the default keyboard layout is a relatively sensible one, controller is still recommended, as there are a total of 9 things you have to keep an eye on (four bars, four lines, and a jump… Not to mention having to steer when you boost), and hitting buttons and triggers feels somewhat more intuitive than “Shift up one key, quickly right one key, wait, two keys right, yada yada.” And, while the tutorial does a really good job of letting you know what’s what, it also lets you know that the gloves are going to come off relatively early, leading to hectic times. Helpful tip: The bars to jump seem to be at a slightly later point than either the lines or blocks.

So it’s kind of nice, then, that the early tunes are among the most relaxing synthwave beats I’ve listened to in a while. Makes a nice counterpoint to my swearing when I inevitably screw it up. A good soundtrack, with intuitive beat markers, is a hallmark of a good rhythm game, and Sequence Storm definitely provides on that front, whether that’s the lighter tracks, or the grim saws and bass. Aesthetically, it also works pretty well, whether that’s the comic style story segments (In which Elijah is trying to make his way in a world where AI have taken all the jobs), or the race segments, which have a low poly, visually clear charm.

Now… The thing is, the gloves come off early, and the game is not forgiving. Jump bars, in particular, don’t give much room for error, and I very quickly found that anything less than good, long streaks is going to fail me a run. Although it doesn’t look it at first, it gets twitchy, and it gets twitchy pretty quickly. Does that make it a bad game? No. Its inputs are responsive, and you can, over time, build up that muscle memory, even with the track twisting and turning in an attempt to throw you off, but it’s definitely going to throw off newcomers. Add in a challenge mode later, and… Well, it’s a tough game, and I don’t think it makes any bones about that.

Still, personally, I see myself coming back to it every now and again, despite finding it somewhat unforgiving, as the tunes are excellent, the visualisation is clear (and minimalist enough that there’s few distractions), and the story, equally minimalist though it is, is interesting. I would maybe like beginner mode to be a liiiiittle more beginner (Okay, a fair bit more beginner), but that is, honestly, me.

The Mad Welshman does not dance. Well, not often, anyway. But he does like a good tune.

What is it with fun-hating dictators? So often in a game, a dictator comes to power, and the first thing they do is ban something fun, like music, or skateboarding, or dabbing and twerking…

…Okay, I have yet to encounter those last two, but I’m sure it’ll come up someday. In any case, in TERRORHYTHM, the thing that’s been banned is music. So, in true video-game revolutionary fashion, not only are we going to defy the endless hordes of the Not-Actually-Great Leader, we’re going to do it with rhythmic beatdowns! 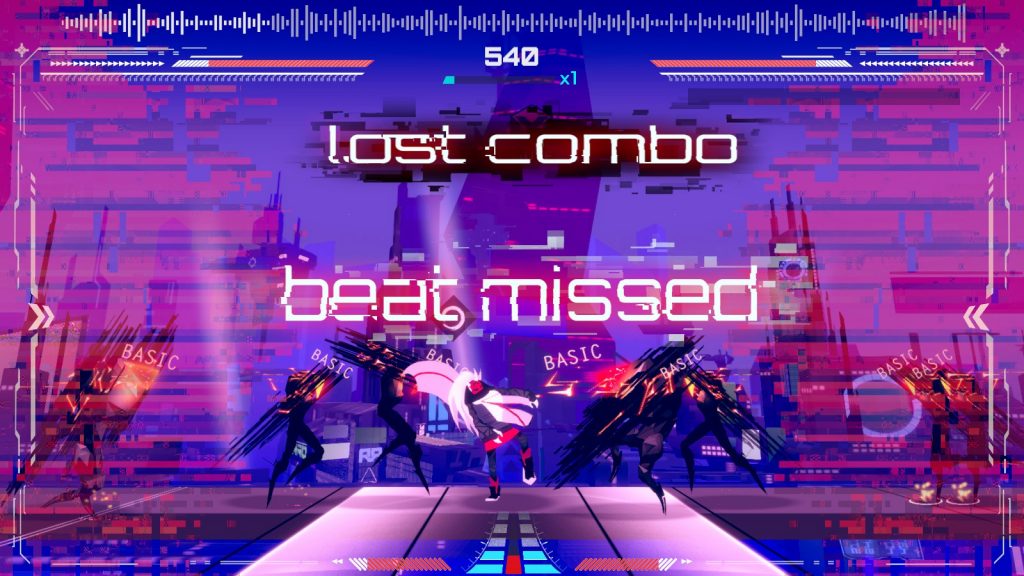 The basic idea is that, from left and right, enemies will stream, sometimes big, sometimes small, and you have to fight them to the rhythm. Left and right does basic attacks, down expands your area of influence (as do certain weapons taken from enemies for a limited period of time), and up charges a move where you smack multiple enemies in a direction at once (useful for when they’re grouped up, too close to attack one at a time.) Of course, where the depth comes in is that different enemies change that basic game plan, and you have to adapt. Some enemies (and small groups) can only be beaten up safely with the charged attack, some require multiple attacks, and others cannot be attacked with the charged move. And those are but a few examples.

Suffice to say, the main obstacle to enjoying TERRORHYTHM right now is its difficulty. Although adjustable to some extent, it’s taking me about three or four tries to clear early levels, and, of course, it’s a score attack game, so I’m reminded, every level, that I’m not doing so hot. Still, it’s got its charm, as the base tracks are threatening, pulsing EDM (lots of saw, lots of bass), the aesthetic is similarly hard edged, and enemy types are clear to see as they stream in.

The Tron style Chakram allows you to attack at any range… For a limited time.

In essence, it’s a promising start, and being able to use your own music in the game is a definite plus (I tried it to CoLD SToRAGE’s “Canada” , and died horribly every time), its base gameplay loop works just fine, but it’s quite tough, even after some early balancing. Still, it’s early days yet, and I look forward to seeing what comes next.

No, really… Somebody’s going to end up making a game where a dictator bans twerking. One day…