My god… Actual windowed modes in a tabletop adaptation? Blessed be!

And yes, I shouldn’t be getting excited because this should be bloody normal… But it’s not as common as I would like. Anyway…

Potion Explosion is an adaptation of the tabletop game of the same name, and… Well, due to its nature, I feel like it works better as a digital adaptation, even if the tabletop version is undeniably quite pretty. You see, it’s a game in which you’re collecting marbles containing potion ingredients, but, importantly, if a potion of the same ingredient colour as the one below your chosen marble falls, well, all of that colour then get collected, which can then chain. Using these ingredients, you can, as the game implies, make potions for points. Make five different potions? Get a merit badge. Make three of the same kind of potion? Get a merit badge. The combination of merit badges and points then decides what place you are… But there can only be one teacher’s pet for Albedus Humblescore (Yes, the boardgame was made during this period.)

Visually, it’s pretty damn clear. Even the tabletop game was clear, with four clearly differentiated colours of marbles, but in the digital adaptation, they add symbols in too. Moons (black), Fire (red), Water (blue) and Star (Yellow.) There’s DLC which adds extra rules and a fifth potion element, but that’s another beast entirely, so… Brownie points for accessibility.

Musically, well, it’s a bit limited, but it isn’t unpleasant, and that’s about all I can say about that.

Overall? I’m okay with Potion Explosion. It’s a good adaptation of the tabletop game that plays to the strength of a digital format, the tabletop game was fun to play with friends, and I have no doubt this one is too. Oh, and for folks like me who prefer to play alone, yes, there is a Versus AI mode, with varying levels of difficulty.

So, a fairly warm recommendation from the Welshman.

The Mad Welshman loves making potions. His family, however, do not, ever since his childhood thought of “What happens when I mix all the ingredients of an 80s chemistry set into one test tube?”

Source: Cashmoneys
Price: £4.79
Where to Get It: Steam

END_OF_DOCUMENT_TOKEN_TO_BE_REPLACED

Filed under: Adult Only Games, Game Reviews by admin

END_OF_DOCUMENT_TOKEN_TO_BE_REPLACED

Filed under: Adult Only Games, Game Reviews, Games Gone By by admin

Battle Chef Brigade is charming. Its art style is clean, consistent, clear, and cool. Its music is very fitting and well crafted. It even fuses platforming combat, match 3 gameplay, and the tension of a real competitive cook-off. Although it at first didn’t seem to appeal much, it did grow on me, and part of that is how it introduces its mechanics. 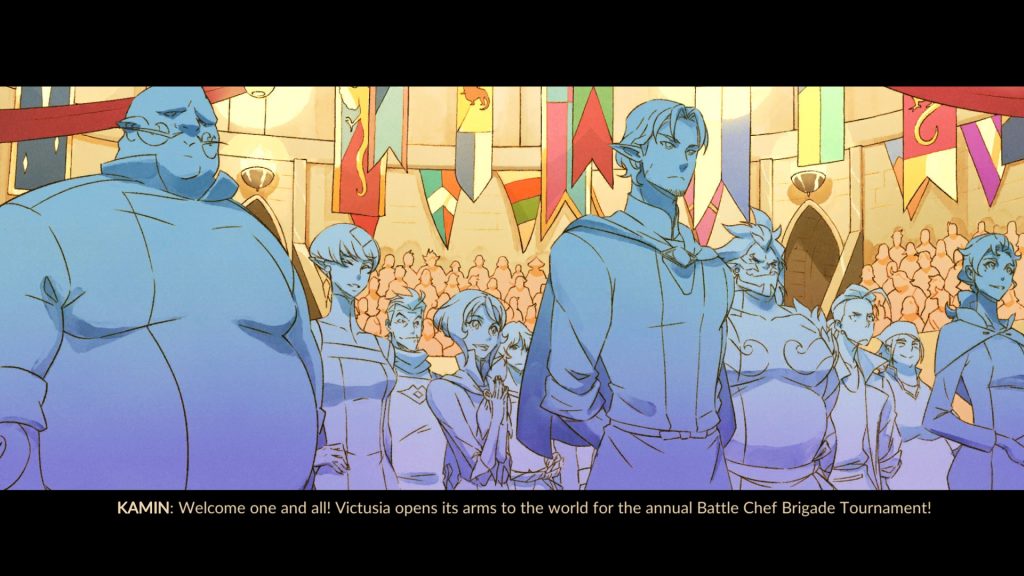 So much talent, all in one place… Oh, so jealous of the judges!

Before we talk about that, though, let’s talk about aesthetic. Battle Chef Brigade is hand drawn, thin lines and flats making for a tight construction, with some good takes on fantasy designs, and similarly tight animations. Varied character design, good music, mostly good voice acting (some a little flat, but mostly good), and it ties into a world with something that I always enjoy seeing, because it’s a subject not often covered: How life changes in a fantasy world. Okay, so there are monsters, and magic. The former is deadly, the latter is potentially deadly. How do you apply the latter (and hunting) to the former, and still have a society that doesn’t have the dread Adventurer?

Battle Chefs. Complete with a cultural touchstone of an Iron Chef style cookoff, with preferred tastes and signature ingredients. It’s a simple idea, but the entire story of Battle Chef Brigade revolves around making it both plausible and interesting. Here, the Orcs Thrash and Shiv, from lineages that peacefully united the Orc tribes through a shared love of cuisine. There, Ziggy, creating a new and very possibly unsafe (but tres cool) method in Haunt Cuisine. Necromantically prepared? Hit me up with those dark aftertastes, my friend!

So, it’s an interesting world, its characters are engaging, but what about the play and main storyline? Well, here’s where it takes a bit, just a bit, to get going. If you recognise variations on the Hero(ine)’s Journey, you’ll recognise Mina Han. At first selfish, wanting to see the world, but still with promise (after all, she wants to improve a creative skill, I can applaud that), she learns hard lessons, faces a tribulation that affects both her and the world (I won’t spoil it), and becomes a better person along the way. Okay, so it may not win awards, but it has charm, and I like it. 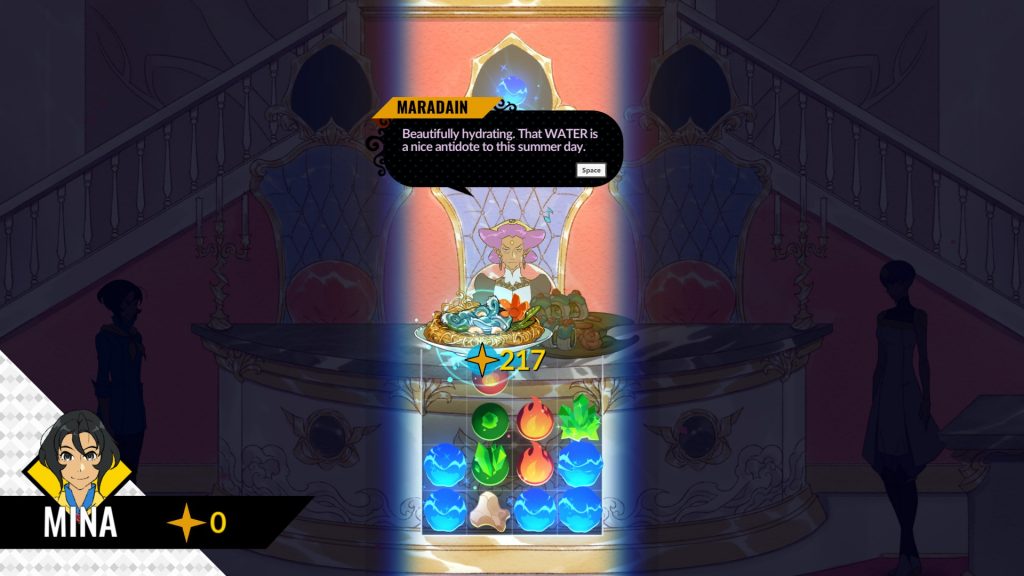 The dishes come in many types, and they’re all *eyewateringly* nice looking.

Similarly, the basic idea of using Match 3 mechanics with a cook-off makes immediate sense once you see it in action. Hunting down monsters in a themed arena area off to one side, gathering ingredients at first seems pretty basic: Wallop monsters, they die, they drop stuff, you can carry so much, run back and forth to gather ingredients. Ingredients have different gem types and shapes, three gems make one better gem, and you can do that twice before you have the best gem. How the heck does that fit with cooking? Well, there’s only so much room in the pot, and you can’t rotate the ingredients before placement. So, if you want to make the best dishes? You want to learn the ingredients, learn the biomes.

As you go along, however, new mechanics, items, and explanations get introduced, pretty much all the way through the normal story mode. At first, this put me off, but it must be kept in mind that not only is there a New Game+ of sorts in Hard mode, there’s also two challenge modes, and a Daily Cook-Off, using fixed items. The story mode won’t take a terribly long amount of time, but it’s still enjoyable, and I did come to like the fact I’m learning new things every time I get further. Oh, wait, you can do that? The birds aren’t just assholes, but have a little ecology going? Ohhhhhh!

Overall, I have a soft spot for Battle Chef Brigade. It’s tightly focused on an aspect of its world that it’s made central, but it’s also made it believable, and not only believable, but charming. Thumbs up! 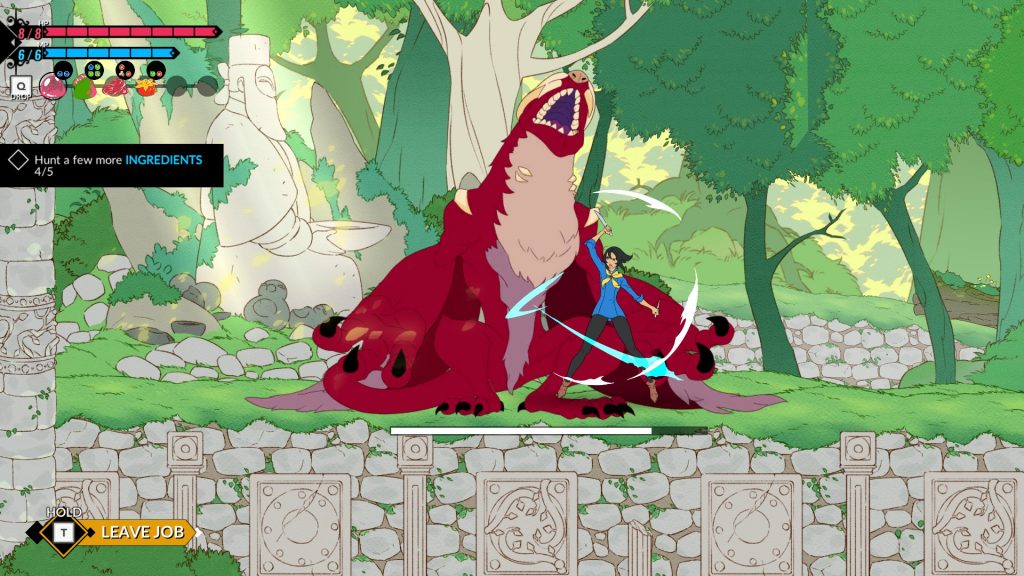 Oh, y’know, just another day hunting for cooking ingredients in a cook-off!

The Mad Welshman would, in a fantasy world, want Haunt Cuisine. Oh heck yes he would. Also he would order from the Flambe Warlocks.