Being an Archaeologist is, in many senses, about being observant. Clues can be as subtle as a passage in a book, the curvature of glacially moulded hillscapes, or the precise composition of a flint arrowhead, and it’s important to be able to see, to understand what you’re seeing. Being a Ninja, if we go by popular depictions or otherwise, is about being observant. Being a covert agent is all about what you perceive, about how quickly you can sense danger, and, equally, about seeing opportunity where others merely see a surly major-domo (for example.) In both cases, livelihood (and sometimes, your life) depends on being able to clearly see the clues set in front of you by circumstance. 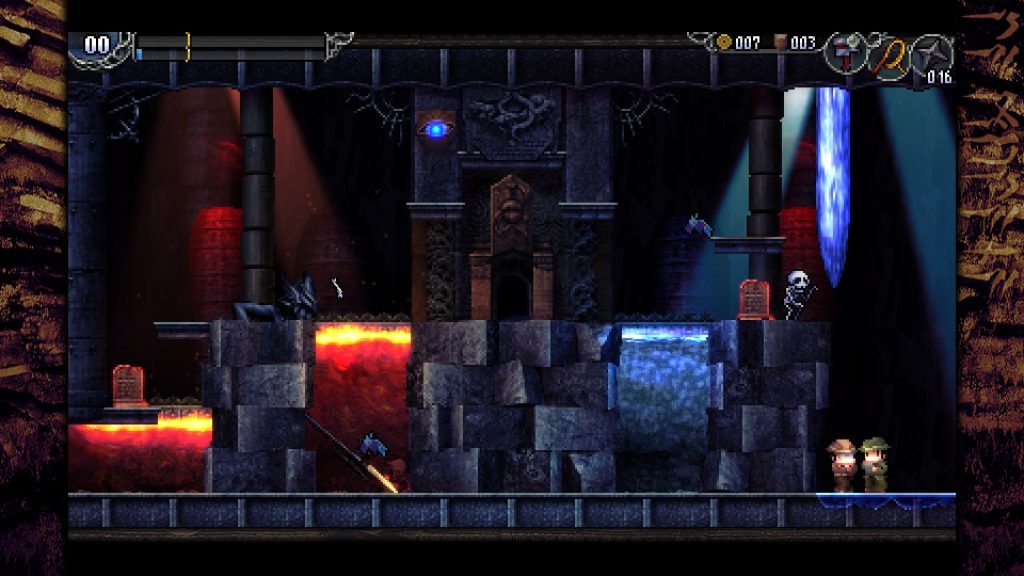 “Do not pursue Le-Meza!” doesn’t have quite the same ring, but yes, the protag’s dad always seems to be near the most devlish traps. I’m in the *POISON LAVA* on the left. Terrible parent, I swear…

And so, funnily enough, it is with La Mulana 2, a game that does explain its puzzles… It’s just not always in the places you’d expect. This is less surprising when you consider that the only family line to have successfully explored the La Mulana ruins (and, with your control, hopefully explore the Eg-Lana ruins that seemingly coincide with them) is a family of… Archaeologist Ninjas. Lemeza and Shawn, from the last game, and, the main protagonist of this game, Lemeza’s daughter Lumisa.

So, for those just catching up, La Mulana was, and is, a love letter to the MSX (One of Microsoft’s early attempts at “A computer on every desk” , an 8-bit system that found popularity in quite a few places, but most notably Japan and Brazil), and the action adventures that could occasionally be found on the system. It’s an action platformer, but with puzzles of all stripes, some of which will kill the unwary instantly, a variety of enemies, and, of course, bosses… Some of whom will kill the unwary instantly. Save early, save often, and investigate things. Oh, except that tablet. They told you not to read that tablet for a reason, don’t do that. That’s the Hard Mode Tablet.

Don’t say I didn’t warn you. Or that the game didn’t. 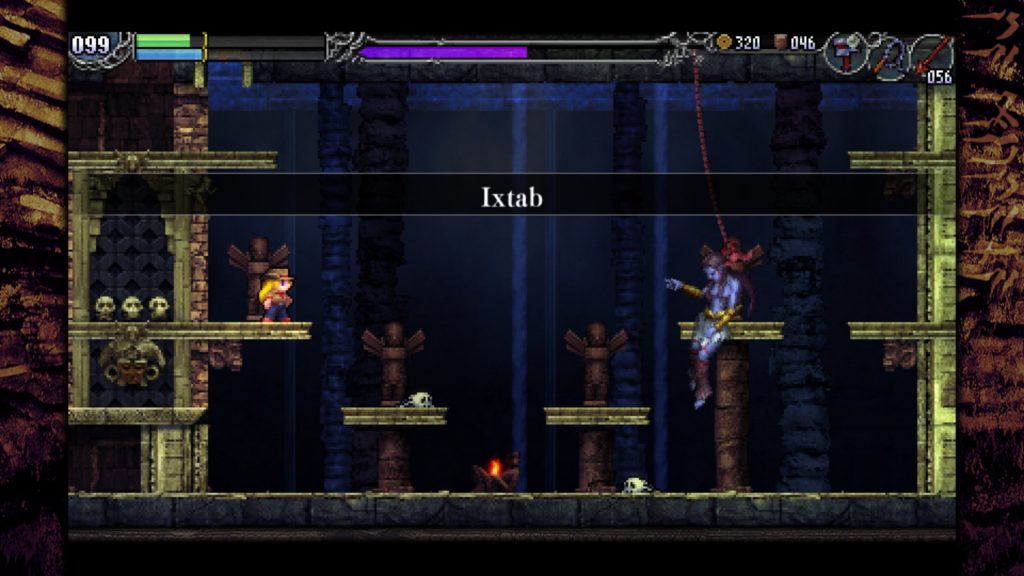 Bosses and NPCs alike take from a variety of mythological sources, from the Aztec, Mayan, Norse, and Celto-Gaelic cycles. Ixtab, for example, is the Mayan goddess of… Well, you can probably guess. 😐

Overall, La Mulana 2 is a more focussed, somewhat improved version of its predecessor. Awkward to no air control has become “A little air control” (and jumping puzzles designed around this), the early game is less punishing (You can, with just a little prep, take on all the minibosses and boss of the first area without serious weapon upgrades), the writing’s improved a little, and the art style is about the same as the remaster of La Mulana 1 (Solid pixel art, combined with some amusing hand-drawn characters for the conversations.) It controls relatively well (although the keybinds take some getting used to, and, even as an 8-bit kid, it took me a short time to figure out that F2 is for inventory, settings, and apps, and F1 is for conversation, the area map (if you’ve found it), and the area teleport interface. Swimming is still somewhat painful, alas, but we can’t have everything.

Thing is, La Mulana 2 does exactly what it sets out to do: Be a tough, but mostly fair adventure platformer, with a sometimes humorous, sometimes tragic setting where not only were all myths real, they all had a single source, a progenitor who, as it turned out, just wanted to go home… And the world ending threat she represented. So, on the one hand, this review is very much a “Does what it says on the tin”, and, considering the Kickstarter campaign was on the platform of “Back this, and I will make a game that kills your character repeatedly” (not the exact words, but close enough), and the first game worked on exactly this notion… Yes, it does what it says on the tin. But I thought I’d finish up this review by describing the core loop of gameplay, because most people who get turned off by the game get turned off by the second part of the loop, and maybe hearing it will help.

At first, everything is very simple: You’ve opened doors, you’ve got the map to the area, you’ve remembered to ensure you can teleport to the area (by scanning the holy grail you normally save with), and you’ve killed pretty much everything you can kill that stays dead, such as minibosses. Good on you… But of course, the game isn’t over, and the question then arises… Well now what? 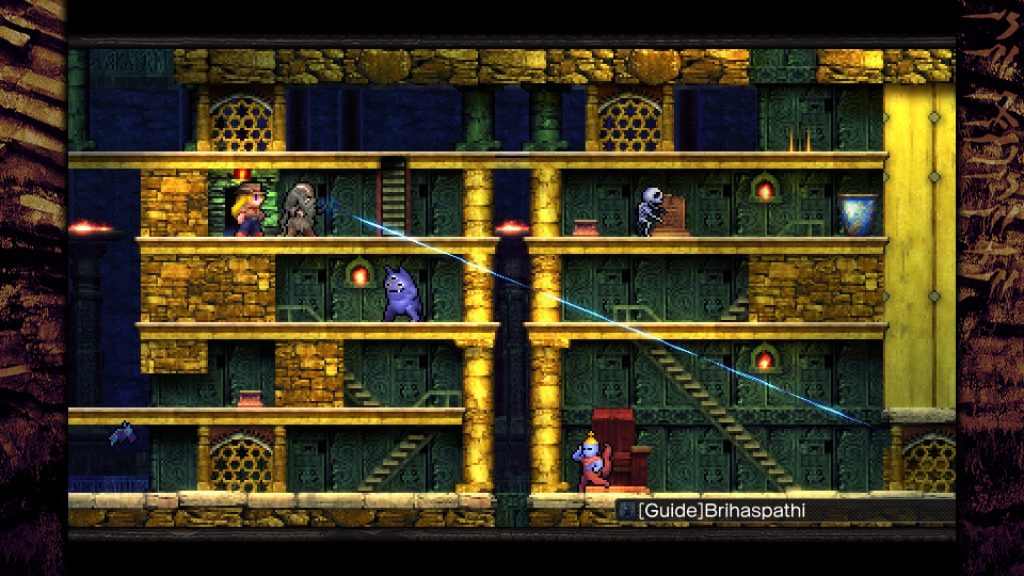 Once you’ve figured out part of the puzzle, the rest tends to fall into place. Which, let’s face it, is a good feeling.

Well, now you need to go somewhere new, solve some new puzzle, obviously. And sometimes, it seems like there’s no way forward. One optional example here is the chain whip. It’s a useful weapon, like your whip, but does double the damage, which is just enough not to hear the dreaded “tink” of “Haha, nope, this enemy didn’t even feel that.” But getting it involves observation, and the fact that you have water (poisonous), ice water (poisonous and cold), lava (hot), and poison lava (hot poison, and no, I’m not joking. Poison lava. Just for added “Screw you.”) All I will say is that identifying which is which is very valuable in determining whether a path is suicidally impossible… Or do-able, providing you know how to deal with the swimming. This is one example of where the way forward is there… You’re just not seeing it. Drawings on tablets give you hints to what these cryptic texts are talking about. Tablets tell you about things… Walls can look different, maybe crumbly, maybe hollow.

And then you find a way forward, and it probably kills you, because of something you hadn’t seen before. Sometimes it’s a miniboss. Sometimes it’s a new enemy. Sometimes, it’s gotcha traps, which, I’ll grant you, are a turn off (although even these mostly give clues to their presence… Even if the clues, sometimes, are bait.) But you know a way forward. Due to the relatively nonlinear nature of the game, it doesn’t even have to be the same path your friend took (I got two sigils before my friend did, but had to look at his footage to see where the hell the chain-whip was, for example.)

That, in the end, is the core of La Mulana 2: Explore, probably die a lot, save often so the deaths set you back less, find clues, find cool items and mythological beings to talk to (or fight), solve those puzzles, beat those bosses, eventually save the world, hopefully have a good time doing so. Despite being horribly stuck, I’m having fun, and I hope folks who get the game (if they do after reading this) enjoy it too, because while it’s sometimes old school, it’s a lot more fair than the old-school I’m used to. Looking at you, old text adventures… BITE LIP… Who the hell thinks BITE LIP is the proper solution to a puzzle, I ask you… 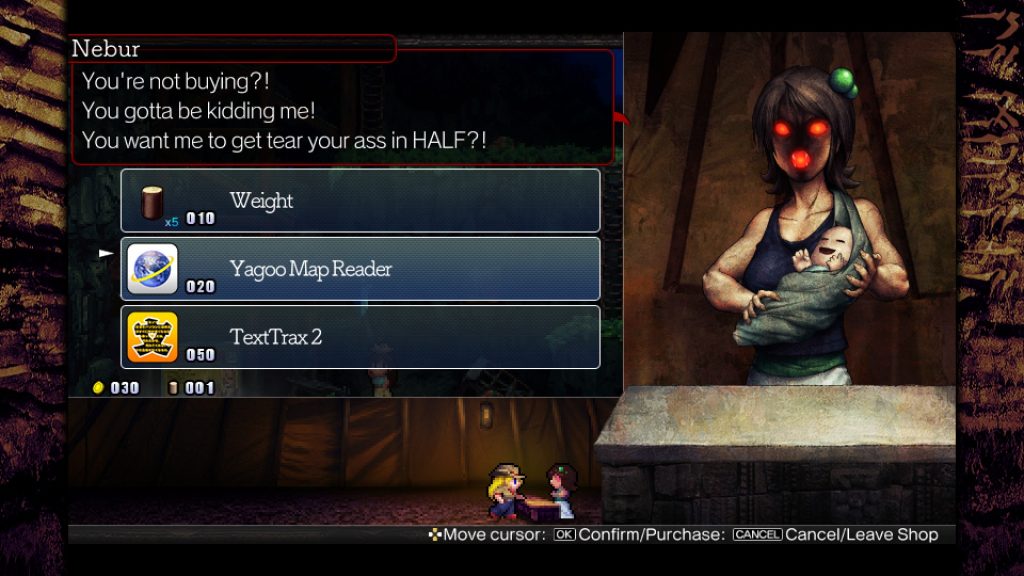 Even returning characters get some impro-H GODS, ALRIGHT, I’LL BUY SOME WEIGHTS, JUST DON’T HURT ME!

The Mad Welshman will draw the curtain on this review, to save you from a rant about the bullshittery of old text adventures… For now.