Good spaceflight games are, even in these days where they’re coming back, few and far between. But Everspace, god help me, has definitely grabbed my attention in a big way, because even though it’s only at 0.3 (0.4 coming soon), it’s already quite polished, and had me whooping like a schoolchild at how enjoyable it was to die, again and again and again. 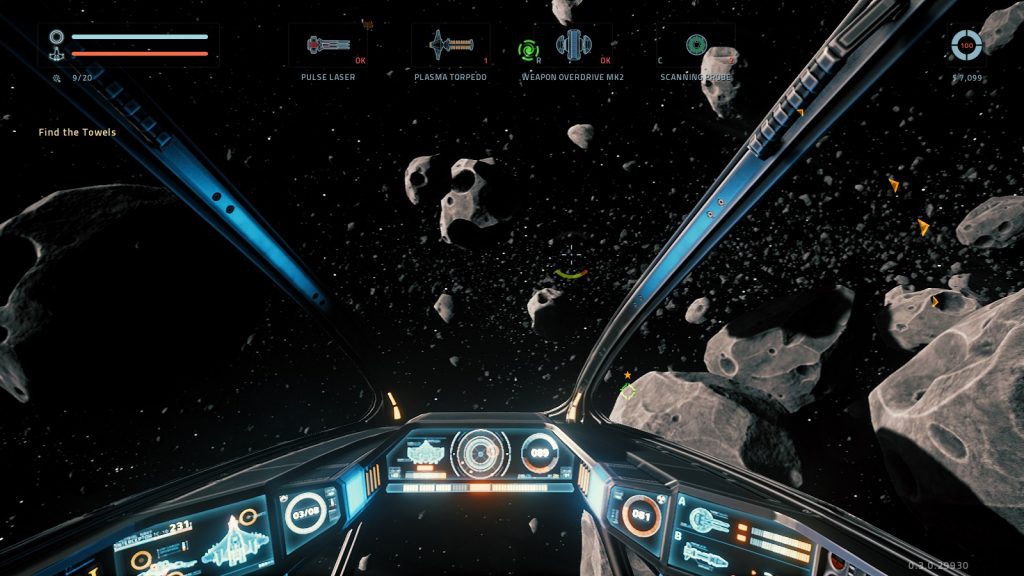 The game has missions, every now and again. I can tell the mission giver is not a hoopy frood, because he doesn’t know where his towel is.

Yes, you heard me right. It was, and is enjoyable, even in losing. But let’s get into it. Everspace is the 3D equivalent of something like FTL, a procedurally generated universe made of sectors, themselves made of small, junk filled arenas where a series of pilots (played by you), attempt to get to their destination while being chased by the Okkar empire, a reptilian people, being hounded by outlaws, trying to find the resources (Especially fuel, which is needed for Jumps between subsectors) you need to survive, while also being nagged by perhaps the most British AI I have yet to encounter.

Interestingly, all of these pilots are named differently, but sound the same… And I honestly don’t mind. It… Works, somehow. I wish I could tell you how. In any case, the game is very polished for a 0.3 release, with some great soundwork, music that gets the blood pumping, a solid UI, and some nice, chunky ship designs, from the tri-foil Outlaw fighters, to the Okkar Corvette that I encountered in Sector 3 (So far, the furthest I’ve gotten in something like 30 runs.) Every time you die, the money earned goes towards levelling up abilities, chance of good drops, better equipment, and… Different ships. 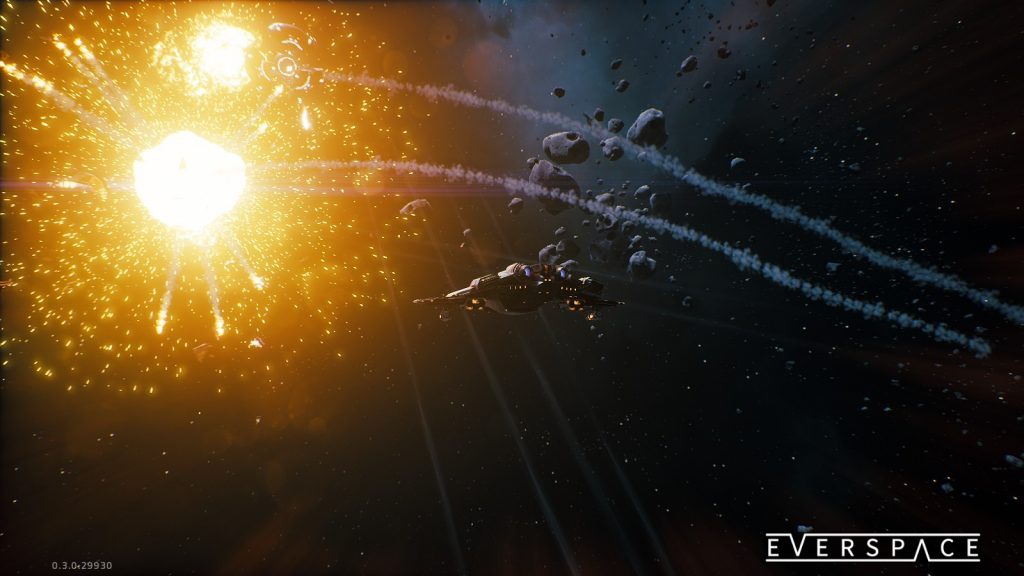 It’s somewhat difficult, for obvious reasons, to grab footage of a fight as it’s happening. Thankfully, the game’s Action Pause Camera allows me to wow you anyway.

I’m not going to say better ships, because I’ve been learning that lesson the hard way with the Gunship. Oh, it’s meaty, alright. The Medium Explorer has a shield, a pulse laser, and a gatling gun (With the option to increase damage for a period of time), but, while the Gunship has armour (Reducing damage taken overall), a Gatling Turret, Combat Drones out of the box, and the highly satisfying Flak Cannon (Mangle an Okkar Fighter in just a couple of shots once its shields are down! Mine an asteroid or crystal node with one shot!), it also has… No shields, and its shield damaging weapon is the highly erratic and energy intensive Fusion Cannon (Which I try to replace with my dependable buddy the Pulse Laser as soon as humanly possible.) It’s also slower, and harder to turn. So, while, with the Explorer, it’s entirely possible to get through an encounter undamaged, the Gunship is very much in the “Damage race” end of things, especially as most of its weaponry is close range (Sub 1Km)

Considering I have to get 10 thousand credits in a single run to buy the Scout, I can’t really tell you what the Light option is like right now (Although I most definitely will before release), but I can tell you that each ship has its own upgrade tree, with a player tree for things like better maps (GOOD), Better retrieval of the wreck of your last run (Providing, of course, you can find it), extra equipment choices, and, of course, more cash, better repairs, more fuel… And while yes, there’s a limited amount of things you can encounter, the later sectors have bigger and badder things (Such as the Link Drone Ship, invincible until you destroy the swarming little beggars it produces… Periodically.) and, of course, the game isn’t finished, so more things are being promised.

Even as is, though, the game is high octane in its combat, darkly relaxing in between, with a lot of its potential already shining through. 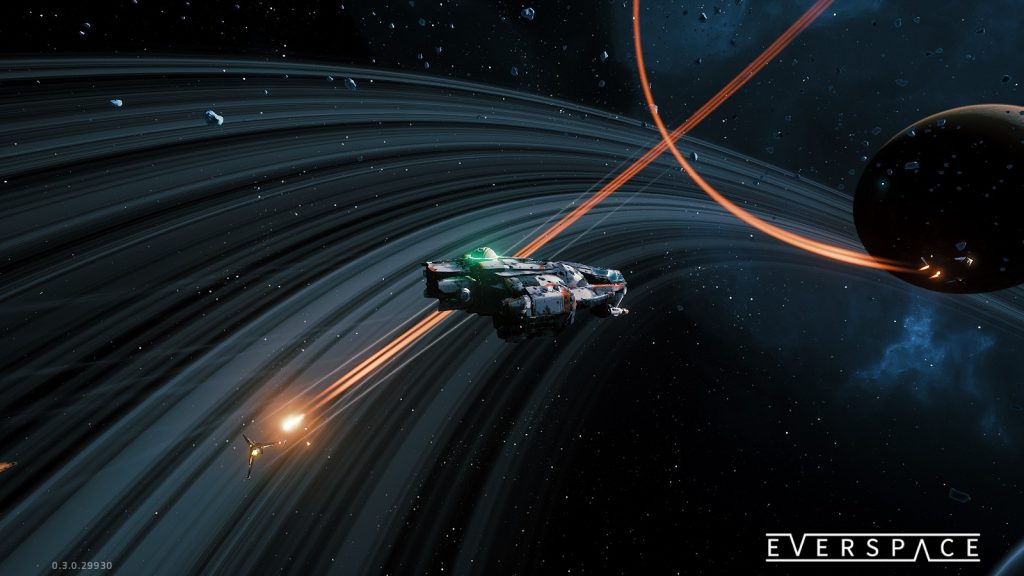 Pictured: The first time I took the Gunship out for a spin. I underestimated my opponents, and I paid the price for not understanding how my ship worked. LET’S DO IT AGAIN!

Oh, and it has an action-pause cam from the menu, allowing you to hit escape at the right moment, go to the cam, and capture your ship either wrecking… Or getting wrecked. I’d like to be able to take pics from more than just the players’ perspective (I mean, if it’s my Gunship getting owned, maybe I’d like to take it from the perspective of my killer, or some random drone that still has a good angle?), but right now? That’s my only niggle with this game. It’s built around multiple runs, and so far, it’s doing a very good job of sucking me into one more run.

The Mad Welshman grinned as he heard the DING of target lock. What was causing all these ships of the same model to come by? Oh, no matter, they always had good loot!

Sometimes, a game needs more polish. Sometimes, it needs a clearer direction. Sometimes, you get games like Vector Thrust. Vector Thrust is, I’m sorry to say, neither fish nor fowl. It has the simpler control scheme of the arcade flight games like Ace Combat, but mastering it requires memorisation of planes similar to a more tactical simulation. It also doesn’t have any tutorial that I could see. This, in a sense, is one of its two core problems: It doesn’t really appeal to either core audience. 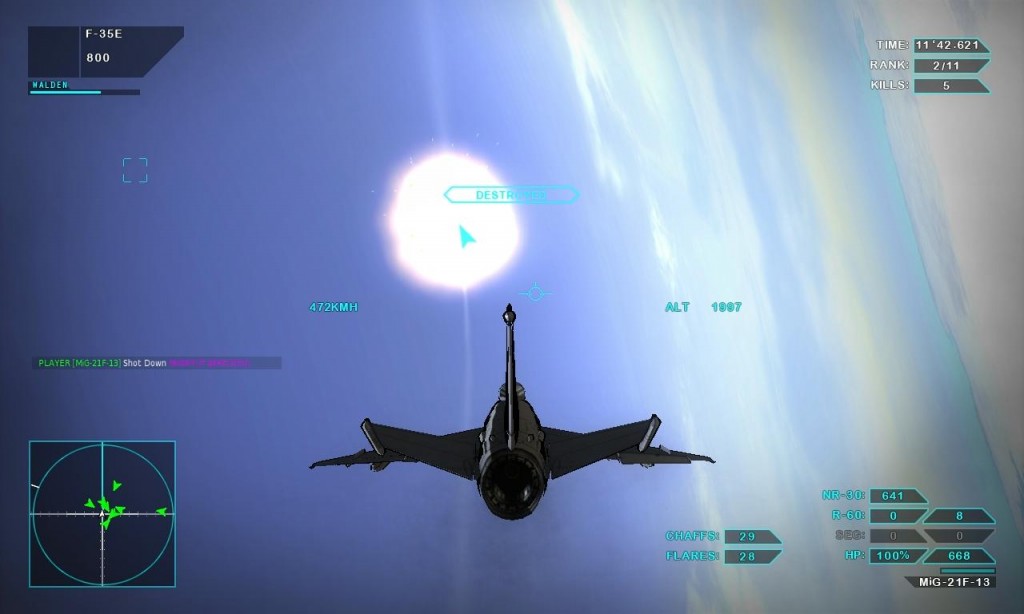 The craft are, it must be said, undeniably pretty. The explosions are alright too.

Picture it, if you will. On the one hand, we have Arcade Pete. Arcade Pete loved games like Afterburner or G-Loc, but never landed his plane in F-119, and scratched his head at Janes Combat Simulator. He only has a passing familiarity with planes, just enough to recognise that maaaaybe attacking a B-52 Flying Fortress with close range weaponry is a bad idea. Pete will wonder why he isn’t able to control the skies, why planes will pass him for more important targets, and why he keeps losing this bloody escort mission. In the campaign, he’ll itch at the chatter beginning the missions every time he loses, and even in multiplayer, he will be outmaneuvered and outgunned. In frustration, he’ll turn to something different.

Then there’s Simulator Jane. Simulator Jane is used to a flight stick, using the majority of her keyboard at one point or another, and has played all the classics. She’ll know her planes, know how to deal with them, and furthermore, won’t be fooled by the relatively basic AI. She’ll dominate the campaign, dominate multiplayer, and… Won’t feel satisfied. There’s not really a whole lot to keep an eye on. G-Force is only a minimal consideration. The damage for each craft is a straight health bar. There’s no wing shake, and missiles seem to be somewhat arbitrary compared to what she’s used to. Shrugging, she’ll go straight back to something worth her time. 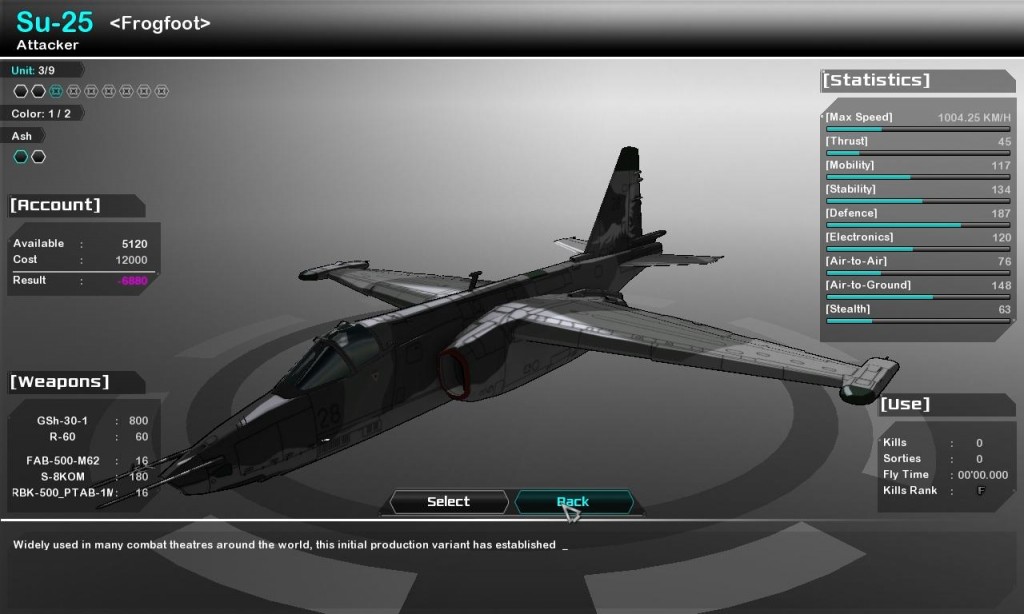 A better example of what I mean, although this is perhaps not the best craft for the mission I’m on.

Both will admit the planes are pretty with the cel-shading being a nice stylistic touch. Both may or may not get annoyed at voice actors who occasionally slip out of accent (Assuming they don’t skip the static cutscenes and mission briefings.) Both will find the “variety of planes” to be… passable, as many are variants on the same families of craft (starting with the MIG, Joint Strike Fighter, X-35, , expanding to 45 families of craft for 260 craft overall), and generally, the later variants will be the more useful in each family. While both will most likely agree that separating the campaign and multiplayer unlocks to be a fair design choice, they’ll find the campaign somewhat dull, and the maps to be fairly ugly and featureless. Both will agree that not including some form of easily accessible information on enemy craft and the lack of any sort of tutorial a mistake. They might find some fun in the challenges though, which include bombing runs, balloon shoots, and acts of aerial acrobatics. But both will also agree that target switching is painful.

In short, this game asks £19 for… Not being friendly to new players, not currently fulfilling the hopes of either sim fans or arcade flight players, and being inconsistent in quality to boot. It’s a game that’s come out of Early Access too early, and it really needs to work out the kinks before I can solidly say if it’s any good or not. Alas, a reviewer’s job is not to say when a game is done, but what the state is at the present time, and, although it’s definitely better than release… It currently feels, as I’ve said, like it’s neither fish nor fowl. And that makes me sad, because it definitely has potential. 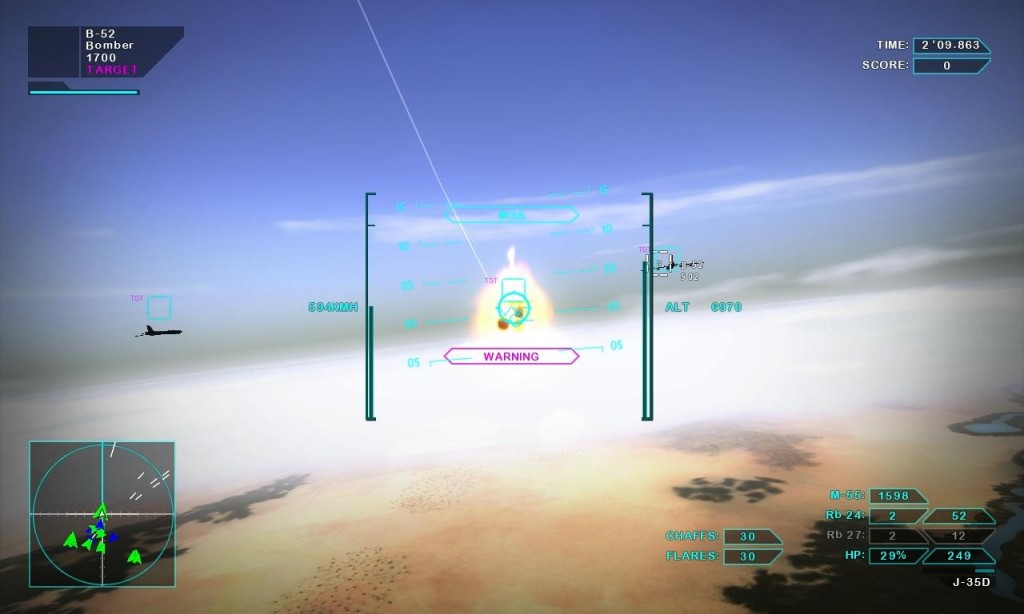 Attacking a B-52 from behind is not necessarily the best of ideas. In fact, it’s more toward the “worst” end. This is about five seconds before the tail cannons rip me to shreds.

The Mad Welshman growled as the missile sped past. He wasn’t as well aligned as the gods demanded. He threw another goat on the sacrificial pyre, and tried again. BETTER.