Source: Cashmoneys
Price: £8.99
Where To Get It: Steam

Content Warning: There’s a fair bit of gore here, and one of the zombies is a small child (pictured in review.) No jumpscares that I noticed in this particular episode, although that may change in the future.

END_OF_DOCUMENT_TOKEN_TO_BE_REPLACED

It’s a sad fact of life that we grow old, and we die. It’s unavoidable, really. But there’s something my father said once, and it’s stuck with me ever since he did: The Norse believed that so long as stories of a person survive, they aren’t truly dead. Their stories still affect us. And, in a sense, this appears to be the theme of the new King’s Quest, lauded as a prequel, but… Just as much a continuation of a long running series. 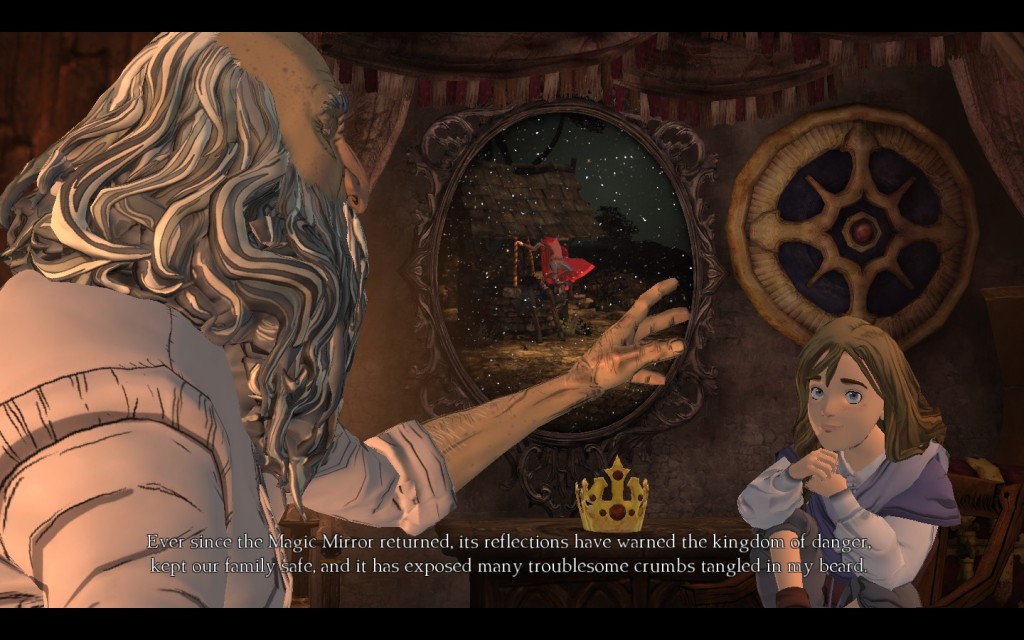 The facial design and animation is something to behold, very fitting to the story it wants to tell.

So, a little background, because King’s Quest, despite the lack of number after its name, is most definitely a continuation of a franchise thought long dead: Way back in the late 80s to the early 2000s, there was a company called Sierra. And one of its first products of note was King’s Quest. It wasn’t a pretty game, although it was considered so at the time. It was an arbitrary game, mocking you for deaths that weren’t always your fault (That bridge… That fucking bridge), and some of its puzzles were poorly communicated (Nikstlitselpmur in particular). But somehow, it caught people’s imaginations, and the Land of Daventry was known and beloved to many, with the exploits of the royal family (King Graham, Queen Valanice, and the Prince and Princess, Alexander and Rosella) being followed by many an adventure game fan. Of course, it wasn’t to last, and with the 6th installment, and the death of Sierra, the title lapsed into obscurity.

Fast forward to the 28th of July, this year, when Activision, having already resurrected Sierra as its Independent publishing brand, and asking The Odd Gentlemen (Creators of ) to make a new installment using the Unreal Engine, released the first episode of a planned 5… A new beginning.

Reactions, so far, appear to have been mixed. So let me put my own two cents in. I don’t mind the controls, they’re pretty simple, and I have yet to find any problems with controlling Graham (Past Graham, that is, as told by of the Magic Mirror of Daventry, and Grandpa Graham, the much aged ex-King.) What I was less enthused by was that, of all the design elements of the original series, The Odd Gentlemen decided to keep the arbitrary deaths (Albeit to a lesser extent), but not the comedic messages. Either that, or they’re not so good at comedic death messages. The second “puzzle” (For the beginning’s environment puzzles are not terribly complex) involves two wheels, one of which leads to certain death, one of which leads to progress. They even tell you as much. However, when going for the obviously wrong one (Although the death was not precisely what I expected), I got… The equivalent of the Prince of Persia’s “No, wait… I got that wrong, let me start again.” It was quick to get back to the scene in question, and indeed, the checkpoints throughout the first segment were fair, but… It felt like trying for a homage, and missing the mark. 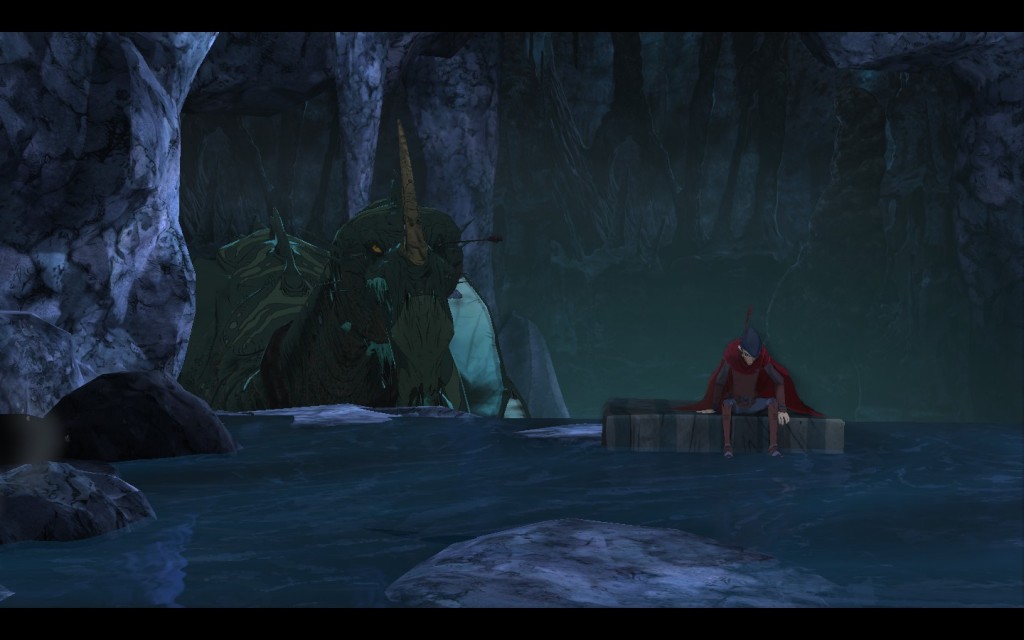 References to the game this is effectively rebooting abound, but they don’t outstay their welcome.

Still, it grew on me. The first section, while somewhat arbitrary, wasn’t incredibly hard to master (in fact, I quit after I’d finished, to check how long it took me. Half an hour, including one and a half cutscenes afterward), and ended on an interesting choice. The voice acting definitely drew me in (Chris Lloyd playing Elderly Graham quite well, and other talent including Josh Keaton, Michael Gough, and Wallace Shawn… Who we shall mention again in a minute or two) and the game is undeniably pretty visually, with the music and sound hitting the right notes too. Buuuuut…

There’s not really a polite way of saying this… Yes, Odd Gentlemen, we loved Princess Bride too. I have yet to meet someone who doesn’t (Although I’ve met people who hadn’t watched it). Wallace Shawn was pretty memorable in it. But if I wanted to see Vizzini get outwitted in a prisoner’s dilemma puzzle that’s rigged, I’d watch Princess Bride. Or I’d watch something Wallace Shawn has done that isn’t just Vizzini, because the man’s done other damn good work. You’ve clearly got chops for writing some heartwarming fantasy coming of age stuff, I can tell that from the very first scene where Gwendolyn talks to her cousin. In fact, I quite like Gwendolyn. I didn’t at first, precisely because she was filling the same role as Fred Savage did in Princess Bride (And similarly wasn’t too fond of Elderly Graham until he started showing more character than “I am reliving my glory days” and… Filling the same role as Peter Falk did in… Do I need to say it?) 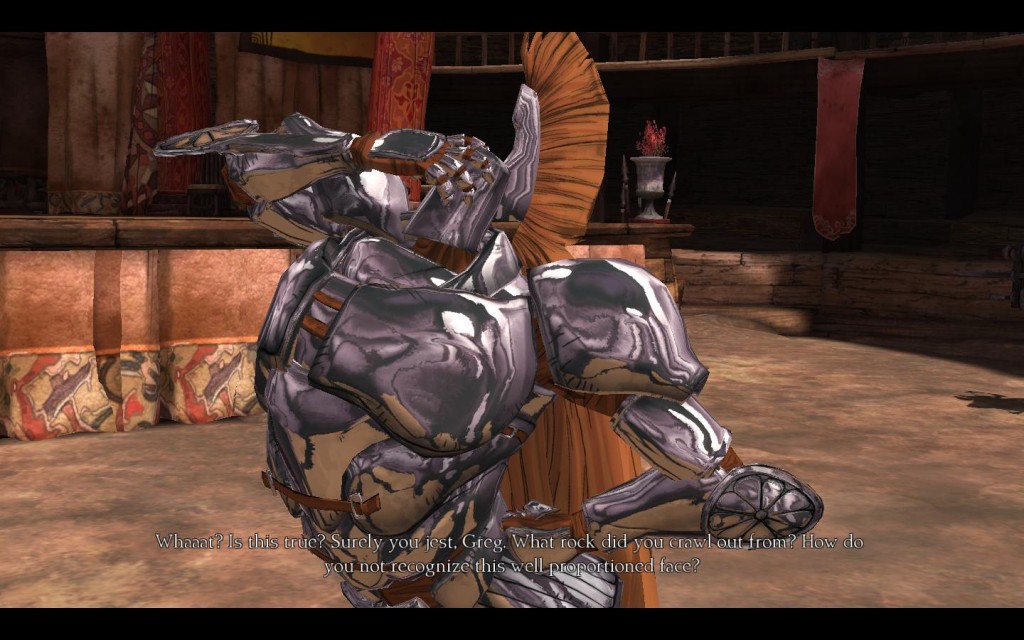 Whisper’s voice actor, along with the rest of the cast, manage to make the stereotypical and archetypal… Believable. “But most of all… Whisper… Love Whisper!” <3
…Me too, buddy.

So there’s an annoyance ranted out. But this episode of the game definitely doesn’t deserve a panning, because it definitely does have highs. Gwendolyn is a strong character. She’s intelligent, as bloodthirsty as I’d expect a small child to be. The characters shine, even the ones that seem somewhat stereotypical (Acorn is the Big Guy with a heart of gold, for example), the voice acting is top notch, and the puzzles often have multiple solutions (I’ve mostly gone for the friendship option in playthroughs so far). The game, as you can see, is quite pretty, and the writing has been interesting. Most of my complaints outside of the Vizzini “homage” are niggles, and I’ve not been stuck on a single puzzle element for more than about five minutes.

For the price, King’s Quest, Episode 1 will, like Graham’s puns, grow on you if you like adventure games, especially games like Life is Strange or The Wolf Among Us, which concentrate more on an engaging story than “Use cat hair with glue with [list].” If you’re not terribly fond of exploring an area, or don’t like arcade segments and quick time events in your adventure games, I’m sad to say you’ll find this a bother. Give it a go if you think you can get around it, otherwise avoid.

The Mad Welshman has befriended many a creature in his lifetime. Some of them he regretted. But most of them still come for tea and biscuits. Like Steve and Susan.