Pinball is, in the physical world, almost an artefact, an anachronism vanishing into the historical distance. Wires, magnets, rubber, LEDs… But for an entire generation, they were a cultural touchstone. In the digital world, however, they still live. And the best of them take advantage of their medium, to do things that would likely be impossible with physical pinball tables. Both, however, can get a little arcane if you try and describe them mechanically. This ramp, followed by these bumpers, followed by this ramp, and then this ramp again, earns you… But This ramp, followed by this ramp, earns you a quick bonus, and if you can repeat that same trick fifty times…

So, it’s fairly safe to say I won’t be saying much mechanically, rather than what applies to all pinball tables: You hit the ball with the paddles, using what you observe of the ball’s physics to hopefully hit what you want, keeping it from falling “out” of the table. The ball falls out three times (or one, in Hardcore mode), and you lose.

Demon’s Tilt (Heavily inspired by games like Devil Crush or Crue Ball), specifically, adds a few things we haven’t seen in a while. It’s a Goth. Synthwave. Bullet hell. Pinball game. Now, don’t run away, it’s not as intimidating as I make that out to be, just… A lot to unpack!

Still here? Whew. Okay, so two of these are, essentially, aesthetic. Pentagrams, liches, and undead lions in iron masks mix with synthwave style neon splashes for score, jackpot, and other notifications, all to a hard driving, Sega Genesis style soundtrack (Itself having diverse motifs: Little bit of OutRun feel for a few bars, tiny bit of Castlevania for another, while still meshing really well.)

The “bullet hell” part is interesting, because, while the bullets kill momentum, they only get spawned under certain circumstances (Hitting one of the table bosses in their mid to late stages, for example), the enemies are mostly weak (and only kill downward momentum, which is really helpful), and, to help counter these extra considerations, the game’s tilt sensor (An anti-cheat measure, originally to ensure you weren’t just lifting the table and tipping the ball where you wanted it to go) is quite generous (to the point where it recommends you use tilt.) Although, like any pinball table, it can get pretty twitchy (and dealing with the twitchy portions is a key to mastery), the bullets are pretty slow, and thus, dealing with them is more a matter of perception, of thought, than of reflexes.

Finally, of course, it is a pinball table. While its table guide is a little sparse, the game helpfully tells you its Letter Goals (for the words ZODIAC, ARCANE, and HERMIT, aka LOADSAPOINTS, LOADSAPOINTS, and LOADSAPOINTS), and the UI is laid out fairly sensibly, with the central focus being… The three tiered table, each tier containing its own enemy spawns and bosses. Kill a boss’s multiple stages, and you get big points, before it returns the boss to its lowest stage. On the one hand, there’s a lot to parse, but it becomes almost second nature to identify certain things: Here’s where the jackpots are. Here’s the teleportals. Oh good, the untouched bumpers for the top-tier letter goal are highlighted, nice job!

There’s some minor performance issues, but, for the most part, that’s Early Access, and this is a well-polished, high-octane table that nonetheless gives you a little breathing room as it goes. Well worth a look for pinball fans, and, if you’re interested in how digital pinball tables can change the base formula in interesting ways, this one’s one to watch out for too.

The Mad Welshman Devil Crushed this review, in his opinion.

The Touhou series has, even without counting fangames, gone a whole lot of places. Starting as a series of bullet-hell shooters on the PC-98, Team Shanghai Alice and collaborators have created Touhou fighting games and versus shooters, changing gameplay with many installments. With fangames, there’s visual novels, metroidvanias, megaman style platformers, RPGS, and, with Scarlet Curiosity, a collaboration between Ananke Spa and Team Shanghai Alice, there’s ARPGs. All set in a world where it sometimes seems that morning greetings consist of an all-out battle with apocalyptic magic between cute anime girls, some of whom are also Youkai or other folkloric nonhumans. 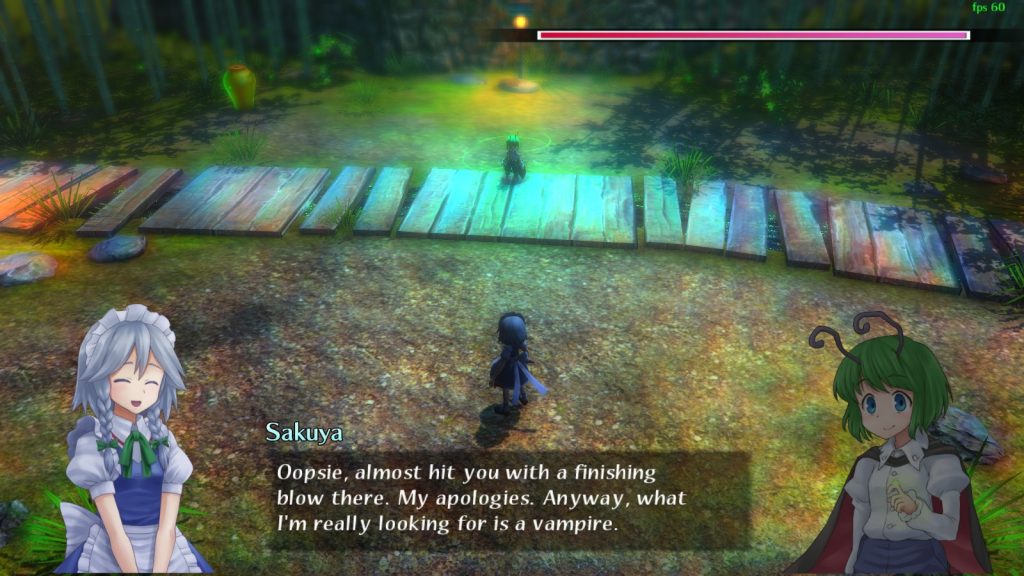 I mean… This might as well be called Touhou.JPG , for how emblematic this line of dialogue is.

Scarlet Curiosity is an odd beast, in many respects, trying to mix action RPG ideas with the bullet-hell gameplay of the Touhou series with… Honestly, mixed results. This is also technically a Going Back, because while this is the 2018 Steam release, the game was originally created in 2014, and officially localised by XSEED in 2016.

In any case, the general idea is that Remilia Scarlet, ancient and powerful vampire in the body of a young girl, is bored. Considering that she is, canonically, one of the more dangerous residents of Gensoukyo, this is already a recipe for disaster, but add in a Tengu tabloid monster hunt, and the fact that something largely destroys the Scarlet Devil Manor, and… Well, you have all the elements ready for shenanigans to occur.

Takes a while to get going, though, to the point that, at first, I wondered whether this really was a Touhou game, bullet helling and all. Fairies were unaggressive, giant centipedes a case of slashing while circling… This, combined with the game having some large and sprawling maps, and a lack of visual feedback beyond numbers and hit sounds, disguised the fact that, in fact, I was struggling to get through levels. Come the second stage boss, and this lack of feedback revealed itself, as I died again, and again, and again, before finally respecting their patterns. It took until the fourth boss for me to stop thinking that the jump button in the game felt like an unfair advantage (Allowing the skilled… IE – Not me… To dodge most early game bullet patterns entirely.

So… Large, sprawling maps (Each taking about twenty minutes to get through), combined with main level enemies that, like a Touhou shooter, don’t get terribly challenging until a little later on, combined with a lack of visual feedback for hits (and the fact that, like many bullet hell games, many bullet types can be nullified with an attack) doesn’t exactly paint the prettiest picture. In fact, it paints a somewhat clunky one. 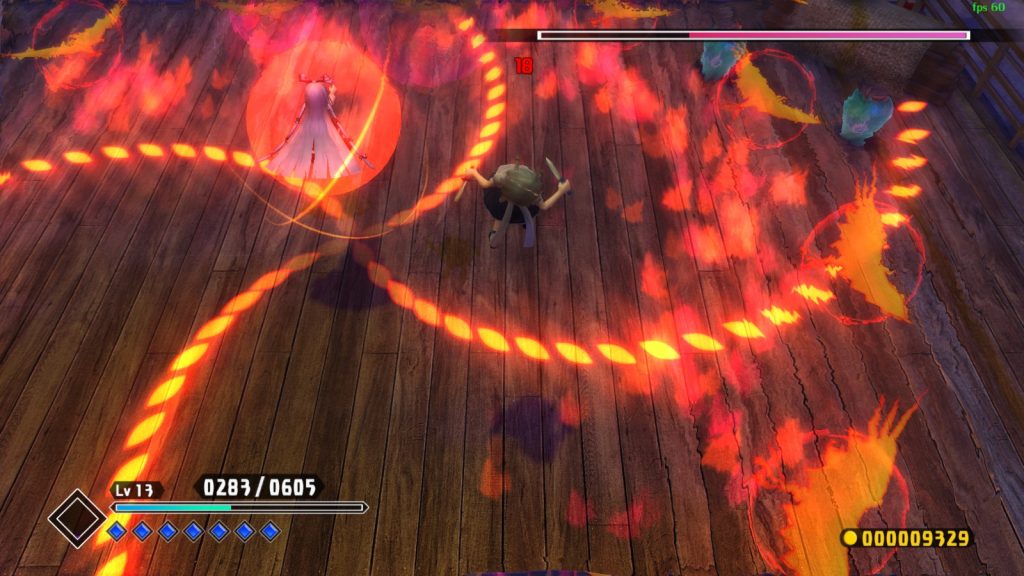 I will never take away, however, how spell card effects like this one look… Awesome.

But there is good here. The models are well put together for the most part, the game does get flashy the further in you get, and the stages, while large and sprawling, are definitely not without their interesting features. Loading and saving is separate for the two main characters, Remilia Scarlet and Sakuya Izayoi, which is a nice touch. Five slots each is generous, and I appreciate this. Similarly, in addition to each character getting different types of Weapons, Accessories, and Armour, following the usual ARPG rule of “Bigger numbers, always bigger numbers” , they also get to switch out their specials and skill cards for different types as they level up, leading to a fair amount of variety that I appreciate. Heck, there’s even some difference to their basic styles, with Sakuya being a tight, melee focused character, whose jump attack is just that: An attack in the air, and Remilia being a more loose, more aggressive character, who has a hard to master, but very satisfying ground dive as her aerial attack. Despite some light value issues making the lighter enemies hard to see well at times, the game visually works, and musically… Well, the Touhou games have always been known for good music, and Scarlet Curiosity is no exception.

In the end, Scarlet Curiosity is an interesting addition to the series, but an acquired taste that is not without its flaws. Longtime Touhou players may find it slow to start, while folks new to the series may well find it frustrating, but I can definitely respect the experimentation with genre mixing going on here. 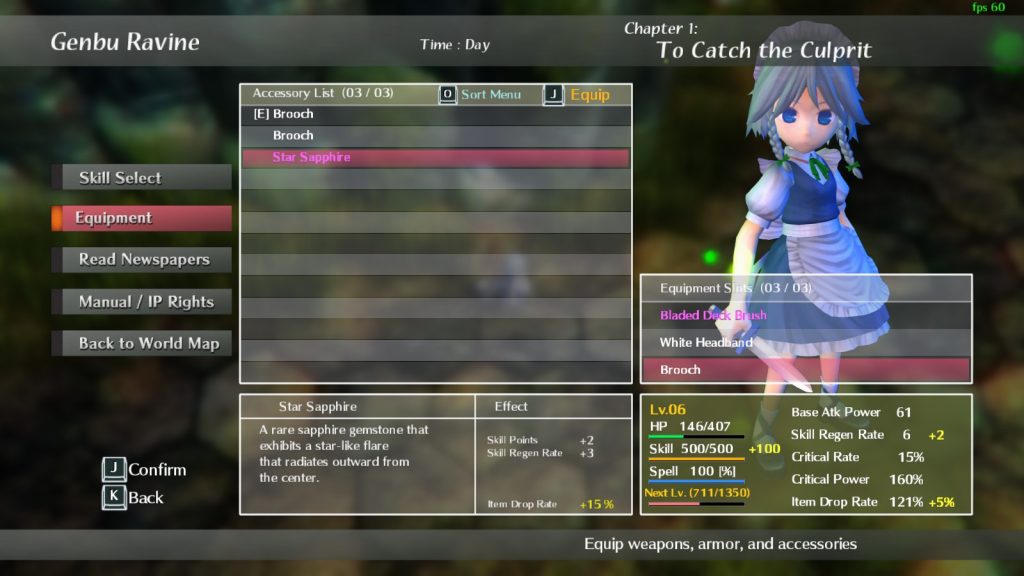 Alas, pink on translucent grey is, as a colourblindness accessibility sidenote, not a good pick.

The Mad Welshman feels, apart from the whole “Being a dude” thing, that he would fit in well in Gensoukyo. I mean, Death Rays, Death Ray Spell Cards… What’s the real difference?