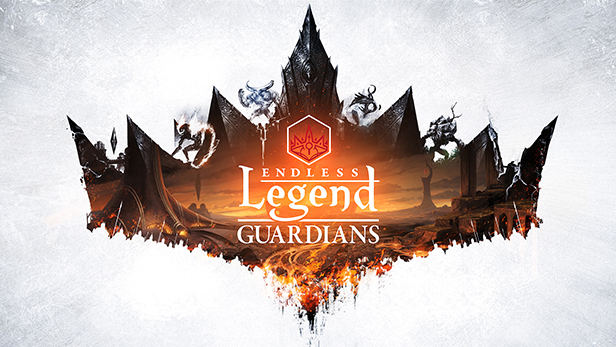 Auriga: A sentient world, doomed to a slow death by an ice age it cannot escape. Many folks live on Auriga, and now, with the Guardians expansion, there’s a fair bit more to do. One of the difficulties with reviewing expansions to games is that, many times, you have to ask “But what’s it actually adding to the game?”, as quite a bit of DLC is cosmetic by nature, and so… Can be summed up by the phrase “Wellll… If you want to look like this, then yeah, sure, go for it, otherwise… Don’t really bother?”

Guardians lets you know, from the very beginning, that this isn’t the case. Global Events. Legendary beings. Co-operative and competitive quests… This DLC adds a whole new dimension to the game, and it’s been my pleasure to see how it changes the gameplay. 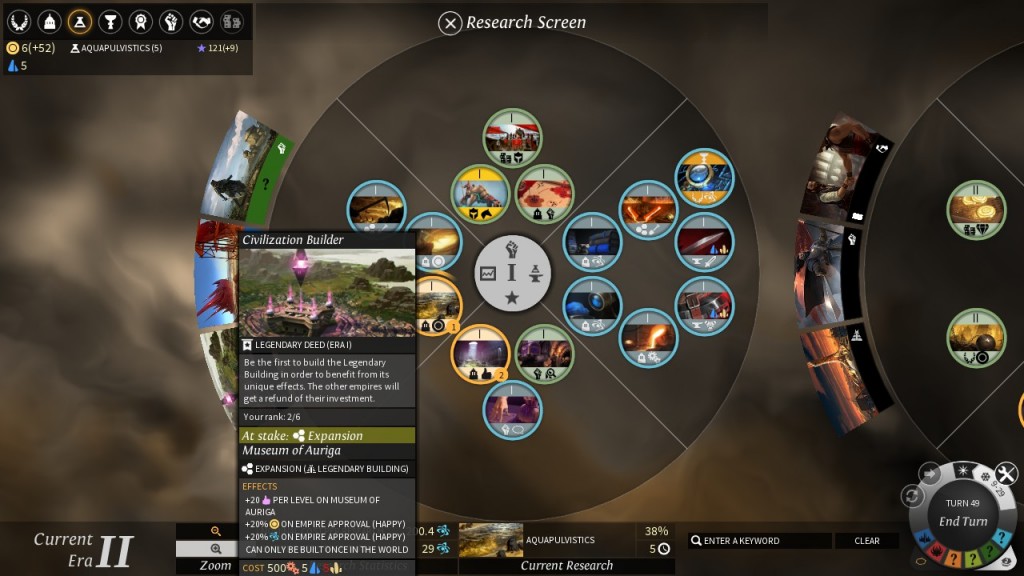 Awwwh crap, who’s building that before me… WHOOOOO?!?

And, from the very beginning, a new goal presents itself: The Museum of Auriga. A whopping 20% approval for each level of the building (Which is based on the city’s expansion), and +20% Research and Dust (the game’s nano-magical currency) across my entire empire if I build it first and keep people happy? That’s… One hell of a first prize, and I can see very few factions, AI or human, not wanting to go for that as soon as humanly possible. And already, I’m wary. Research and Dust are pretty much the core of at least two factions’ playstyles, and 20% at the first tier of the game is not to be sniffed at. The second tier, equally, is pretty powerful… 25% extra industry, over my entire empire, per level? These are game changers, and I’m not entirely sure I like that. I like it even less when I look at my research indicator and see that someone else is building it. That’s pressure, because firstly, I’m playing Broken Lords on this particular review playthrough, and both of those boosts could help my play, and secondly, because I have random factions as enemies, and I’m guessing, judging by the early score boost, that either the Drakken or the Ardent Mages are sharing my version of Auriga, and the empire building could just as equally help them. It’s not insurmountable (After all, I could, after a point, steal the improvement by conquering one of their cities)… But it adss tension I’m not sure I need so early. Helping, however, are Unique buildings, that help shore up weaknesses in strategy, and, later in the game, unique Legendary Units (1 in Tier 3, 2 in Tiers IV and V) with useful abilities like Mind Control and the like, armies unto themselves (No, really… They can’t join armies, they’re that big.) 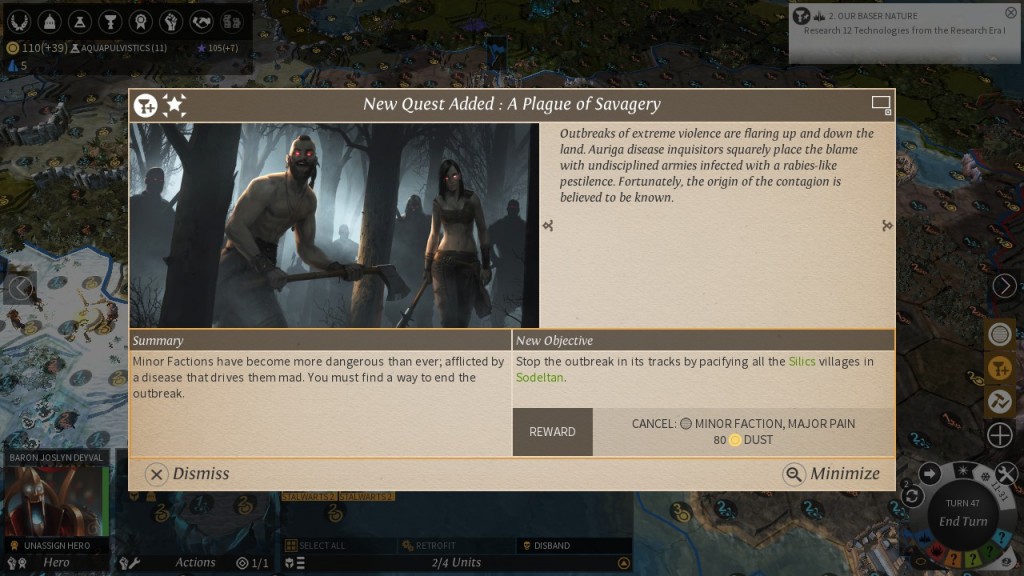 It’s pretty rare this infected village doesn’t belong to somebody else. It’s even more rare they’ll deal with it themselves. Have fun!

Empire goals, on the other hand, are a little more welcome. They unlock technologies (Much like certain story missions do for each faction) or resources (The one I got in Tier 1, Wealth Harvester, gave me enough Dye to use its special bonus for much of the early to mid game), and, like Legendary Buildings, their bonus only applies on a first come, first served basis. Co-operative quests also fall into this category, as they require dealing with a common threat. The one I got early on in the game (Pictured), added tension in more than one respect, because the plagued villages in question, which were making all non-pacified villages more aggressive and lethal? Were firmly in the territory of the Necrophages, who were unwilling to relinquish their favoured sons for the good of Auriga. Again, it adds tension, it adds stories, and that’s the true value of the DLC.

Overall, this DLC is a game changer, adding tension to an already tense 4X game, and whether you want to purchase it or not genuinely depends on whether you want to add more swing to the game, more moments of crying “Oh shit, now they’ve got that thing” or “HAH, Now I am the better builder, and I worry about you no longer!”. Multiplayer is also a consideration here: I’m mainly a single player kind of guy, but in Multiplayer, global events and the competitive and co-operative quests add a new dimension that’s honestly welcomed as a shakeup, variation in what can often be a competition of adaptation and optimal building. The difference shows almost from the beginning, adding impetus to certain goals, and so, if this is what you’re after, then it’s definitely worth the £6.99 Amplitude are asking for. Just be aware that it can seriously change the dynamic of your game, and you won’t be disappointed. 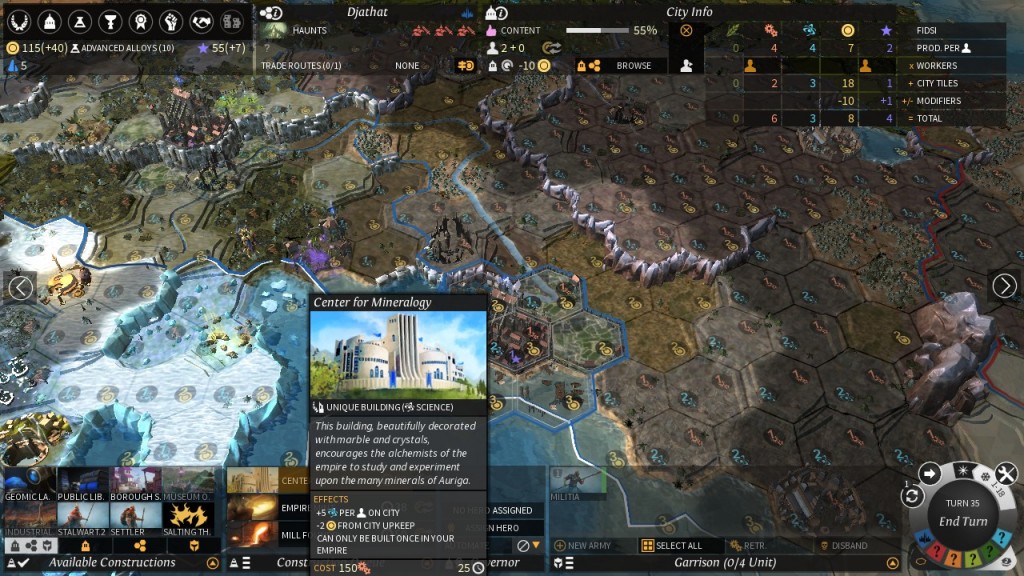 Either extra research, or shoring up a weak research town? YES PLEASE.

Endless Legend: Guardians was released on the 29th April 2015. It was the Ardent Mages who got the first Legendary Building before me, and they cleaned my clock in the mid-game. I was sweating the whole time.