Source: Cashmoneys
Price: £11.99
Where To Get It: Steam
Other Reviews: Early Access 2, Release

GRIP, from the developers of Rollcage, is, in essence, a Future Racing game about cars that don’t care which way up they are, going fast and blowing each other up. And oh, boy, is it fun already, despite not being finished yet!

However… There is a shadow over this fun, that I want to deal with as we go along as well, because it overshadows… Pretty much the rest of it. In a word? Aggression. 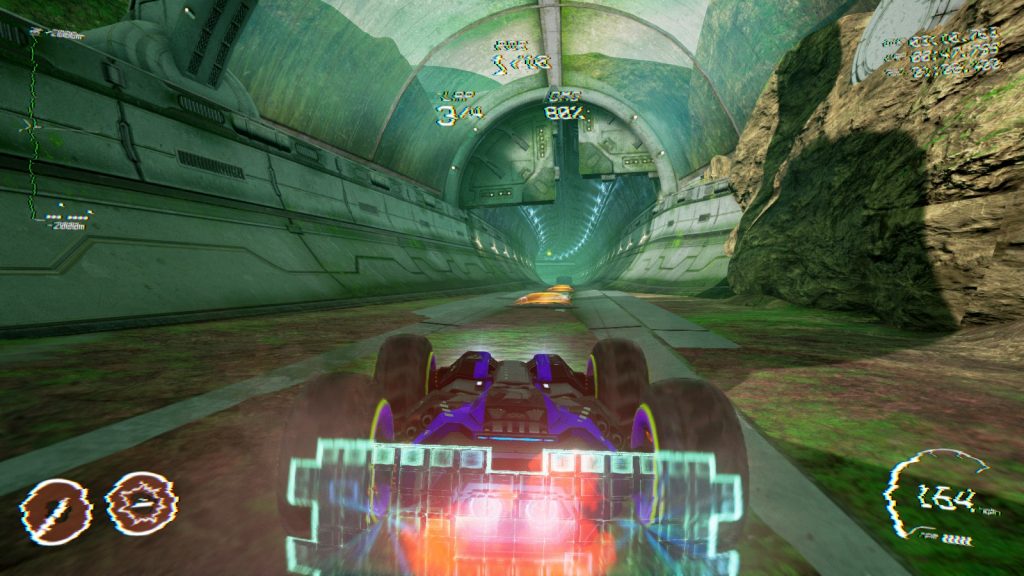 This, while showing off the beauty of the environments, is a prelude to something *bad* happening.

Despite the game undeniably looking pretty at this early stage, aggression is definitely a problem with the game as it stands, in many aspects. In some others, clarity is a problem in some small ways. But aggression… Ahhh, that’s the real problem right now. The AI is very aggressive. When it’s turned on, the rubberbanding is aggressive. And the weapon/utility selection in this Future Racing game? Is very much tuned toward aggression over defense.

In the developers’ favour, the default options tone this aggressiveness down somewhat by allowing the player to partake in the rubberbanding as an option (on by default), and a damage negating option, protecting them (and the AI, by extension) from the spectacle of going boom when hit enough times, losing them the race (also on by default.) Turning off either one of these options, however, reveals the real GRIP, and the balancing problems therein. Possibly one of the first Future Racing games I’ve encountered where piloting at my best is, in fact, the riskiest possible move I could make. Why? 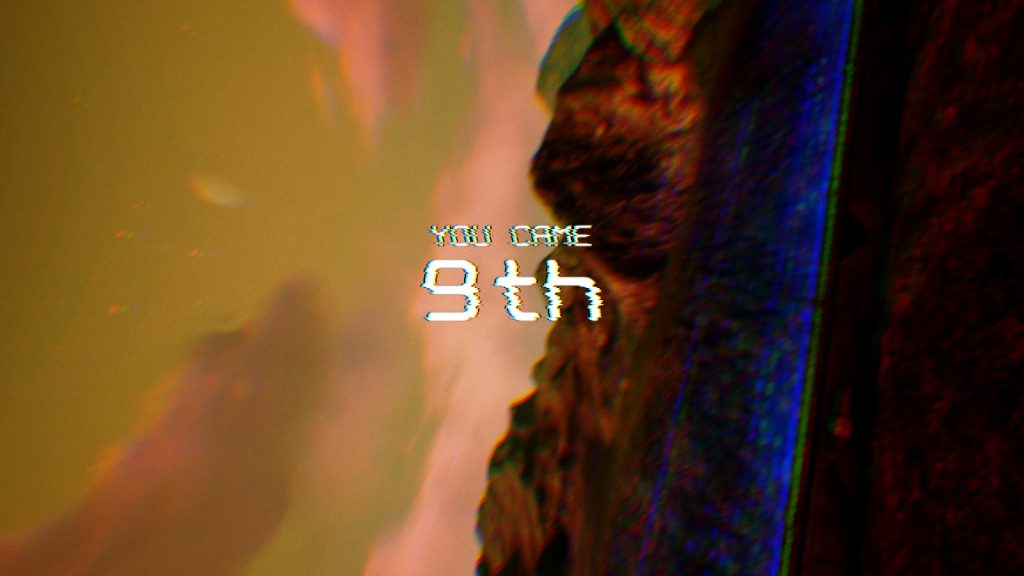 Not pictured: The EMP, missile, exploding vehicle, and hefty swearing that immediately preceded this.

This game has a Blue Shell, in the form of a blue-ish trailed missile. Unfortunately, what it doesn’t have is more than one option that reliably deals with it. The only purely defensive measures, in fact, are a backwards facing shield (Which will be destroyed after one of either what I’m calling the Blue Shell Missile, or normal, lock-on requiring missiles… Or enough machine-gun shots, but we’ll get into the machine-gun in a minute), and maybe (I haven’t been able to reliably check), the EMP Burst weapon, which seems pretty damn rare. No, more common are the machine-guns (Pretty short ranged, but, as I discovered, have a utility in dealing with mines), the mines (Still presenting somewhat of a colour blindness problem by their warning lights being red and not too visually distinct, value wise, from the track, although the new markers and upwards light-ray do help a little), lock-on missiles, the aforementioned Blue Shell Missile, and turbo boosts.

As it is, with catch-up turned on, and destruction off, there’s tight, tense gameplay where mistakes are paid with a loss of at least a couple of positions (Thankfully re-attainable.) With destruction still off, and catch-up also off, it becomes much more variable, where a few mistakes or a string of missile locks could well cost you the entire race. With destruction on, whether catch up is on or not? Getting into first place is asking to be blown up. Staying in the pack until the end is asking to be blown up. It becomes, in a word, un-fun. In more words, the challenge suddenly becomes a nightmare, and “normal” tracks become hellish torture chambers where travelling more than a few hundred yards without being attacked by something is a blessing from the Powers That Be. I have, no joke, been hit twice by a Blue Missile for 80% of my damage, stayed in first for three whole laps… And then had two missiles hit in quick succession in the final few seconds of the final lap, instantly relegating me from 1st… To 9th. 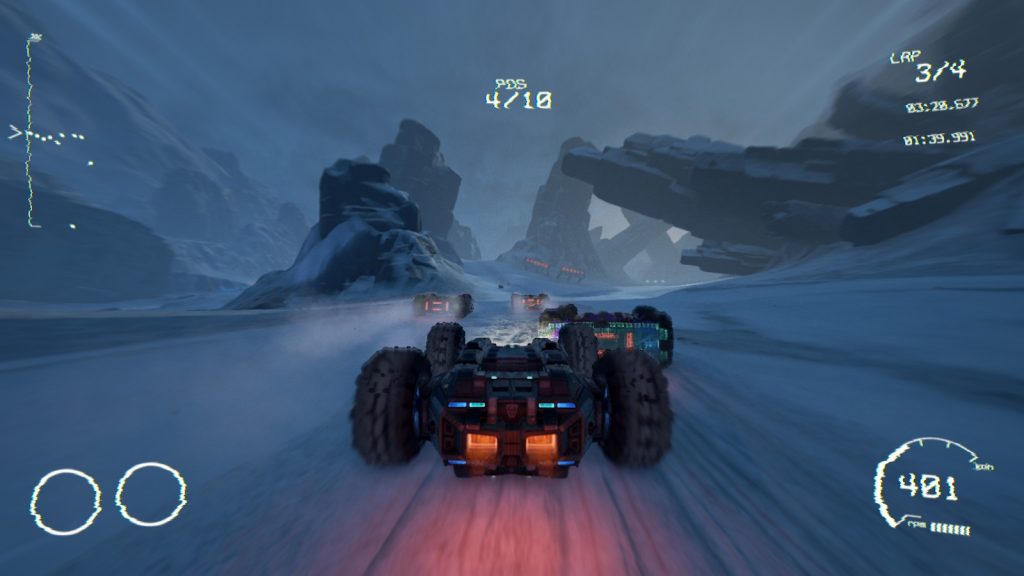 With Catch-Up Assist on and Destruction off, races become a tight test of skill, with the pack being relatively tight.

The Assassin, as this Blue Shell style missile is called, is a painful beast. Doing a hefty amount of damage, and making its way to the leading racer almost unerringly, the back shield isn’t a guarantee of protection against it, and the AI have a very nasty tendency of firing off an EMP burst just before it hits, whether they were the ones to fire the Assassin or not. When this happens (More often than I would like), this makes the race feel, not so much a race against individuals, so much as a race against a hive mind united in not wanting you to win. Even on medium difficulty, the AI… Is effectively too good at times.

Anyway, now that we’ve gotten that out of the way, with catch-up on, and destruction turned off, it’s challenging, and mistakes will cost you, but you can win, even if you’ve been knocked back quite a few times. It’s still a bit of a gamble, but it’s an entertaining gamble. The control scheme is very simple, the music is dark and pumping, fitting a game mostly set in grim industrial wastelands, and the tracks give you lots of opportunities for GRIP’s real draw: Being able to drive on most level surfaces. Tunnels, where you can loop up, then drop onto a powerup. There are multiple paths on the tracks, and each has something to recommend them. And each track, so far, is visually distinct. There are lots of cars, from the slow but tough , to my current favourite, the Speed Car of Doom, the Dominator, and, while visual distinctiveness on the track is a problem, it’s currently not terribly important to know what you’re up against, considering… The cars are mainly customisable by colour, and, so long as you remember not to screw with that destruction setting, this is by no means a bad Future Racing game.

Of course, it would be a better Future Racing game if, amusingly, either destruction wasn’t quite so, er… Destructive, or, at the very least, there were some better repair/defensive options. But as it is, with Destruction off, and Catch-Up Assist on or off to your taste, it is definitely enjoyable… But it would be nice if Destruction on weren’t a death sentence.

The Mad Welshman sobbed as he heard that dread beeping. The beeps were getting closer together, and soon, soon, his car would stop. Oh God. Oh God.

“It’s not like Wipeout!” appears to be quite a common cry for Formula Fusion, a game intended to be… Er… Not specifically like Wipeout, but using the Future Racing experience of a team mostly comprised of folks who did work on Wipeout.

So, naturally, I’m keeping the Wipeout references to a minimum, and judging the game on its own damn merits. And, surprising nobody, the game is by no means bad, even at this early stage of development. Let’s talk about what’s currently not so hot first, starting with the F2000 craft, and the upgrade system. 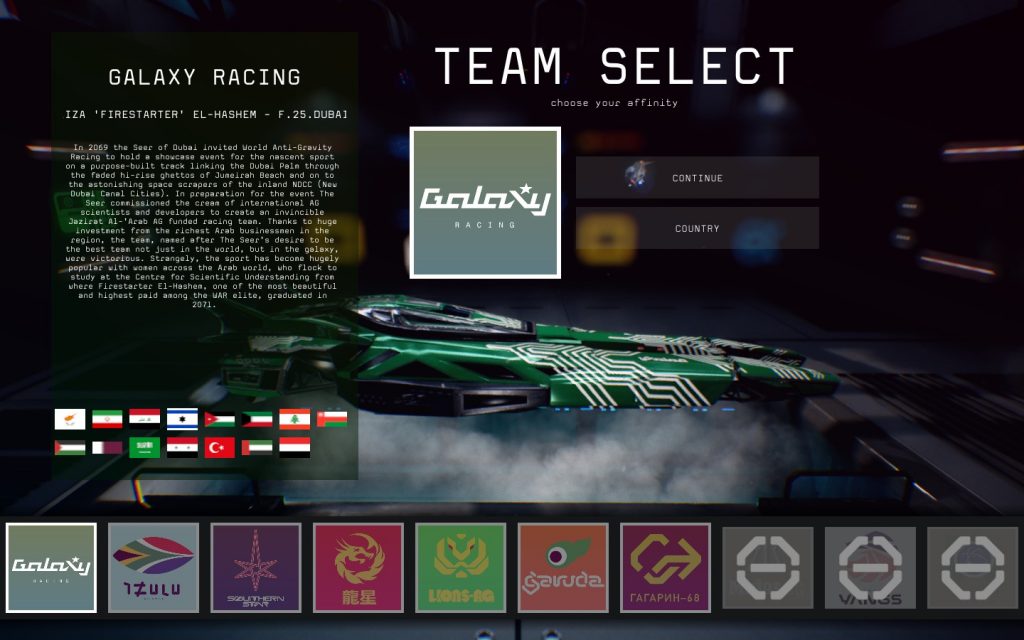 Much like racing nowadays, some teams just can’t resist a really gaudy colour scheme… I LOVE IT.

Whenever people talk about an unresponsive craft, I’m pretty much assuming they mean the FF2000, which does indeed currently steer like gold plated neutronium bricks, while going at a fair clip providing you can actually steer the bloody thing. While I’m almost certain that upgrading its handling stat would allow it to at least steer like a particularly stubborn mule (Proven after writing this sentence), upgrading is currently on a system that’s either relying on multiplayer (I unfortunately wouldn’t know, as, much like many other Future Racing games, the servers are pretty much ghost towns), or on small money drops for each race (105 FusionBux per Gold medal, 55 for a silver, moving rapidly down to 5 for, er… Placing.), with increasing costs the more you wish to upgrade the craft. For example, to upgrade the F2000 to its full level of handling, I would need 6500 FusionBux. I had 35, increasing to 140 as I finished a race in Niagara Falls (Getting Gold, naturally.)

Which would get me 2 percent better handling. There are 6 upgrade bars per craft (Handling, Shield, Braking, Speed, Defensive, and Offensive.) Teams, by the way, appear to be for purely cosmetic and/or roleplay reasons at the present time (I’m Southern Star, the Australian/Oceania grouped team, mainly because I do love me dark craft with red piping. It’s the least ostentatious of the Team colours.) As such, upgrading the craft is a bit of a grind, and it’s uncertain how the planned research tree feature is going to help there. 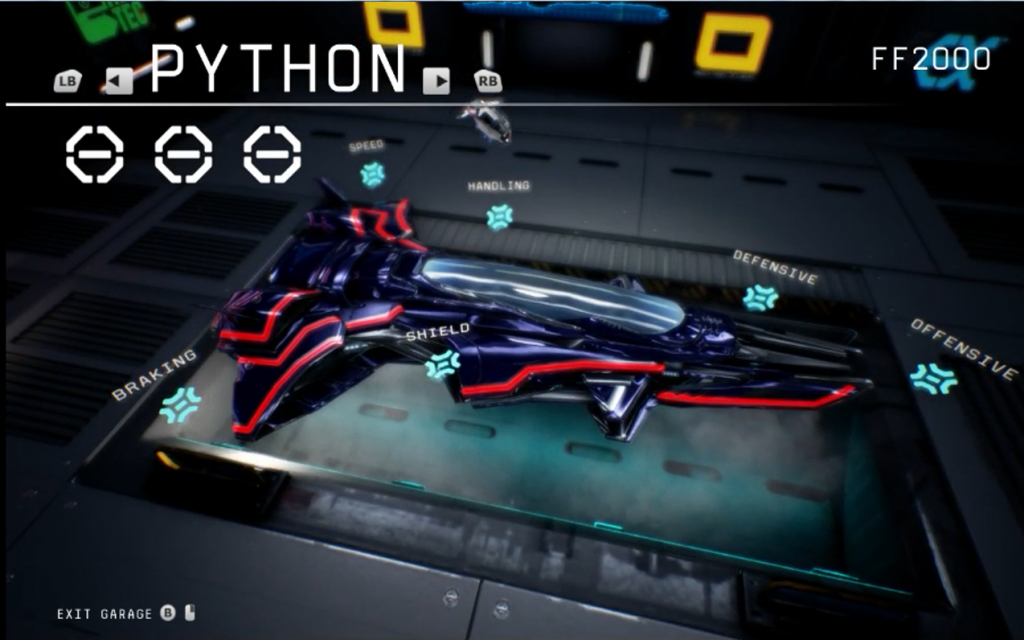 Now, let’s move to a counterpoint: Yes, the FF2000 steers awfully. But the FF3000 is somewhat nippy, and I have a fully upgraded FF4000 (In handling, at least) that turns on a penny, so “unresponsive handling” is most definitely not an issue with Formula Fusion’s current build overall. It may not help that it’s very important to check controls, as the arrow keys control pitch and, more importantly, airbrakes for the left and right… Not steering. Steering is A and D, while accelerate is W, and… Well, we all know the S is meant to be for brakes, and I’m sure it works, but who the hell uses brakes, seriously?

Content wise, it’s true that there are only the craft classes (Customisation is mainly meant to be in upgrades and that research tree… Which isn’t implemented yet), and four tracks, out of what appears to be a planned eight (Manhattan, Niagara GP, Atlas Torres, and Trans Atol are all in, while Fiar Fury, Terminus, Sampa-V, and Midtown are not), but those tracks? Are well designed. Manhattan is a fairly good starter track; Niagara GP makes for a good speed track, with only one corner I can think of that requires airbrakes, and the skill being in keeping your boost going; Atlas Torres is the first track where you can, with a flick of your pitch controls, leave the track at least temporarily, and Trans Atol, formerly an explosive hell of airbrake chicanes and hard turns, is now a slightly more mellow, but still challenging industrial track. There are also weapons, of which you are allowed 2 at any one time (Changing them out between races via the Garage), one Offensive (missiles, plasma, the like), and Defensive (mines, EMP bursts, and the like.) As such, much like RedOut, the emphasis is very much on the racing over the combat, especially with the KERS Boost system, which rewards having full weapon energy with… A boost you can fire off around once every 30 seconds, by holding down both weapon keys.

Then again, anyone who thinks the weapons are thus less meaningful won’t have noticed that EMP bursts not only temporarily turn off your engines, they also drain your weapon energy. Good luck boosting now, bucko! 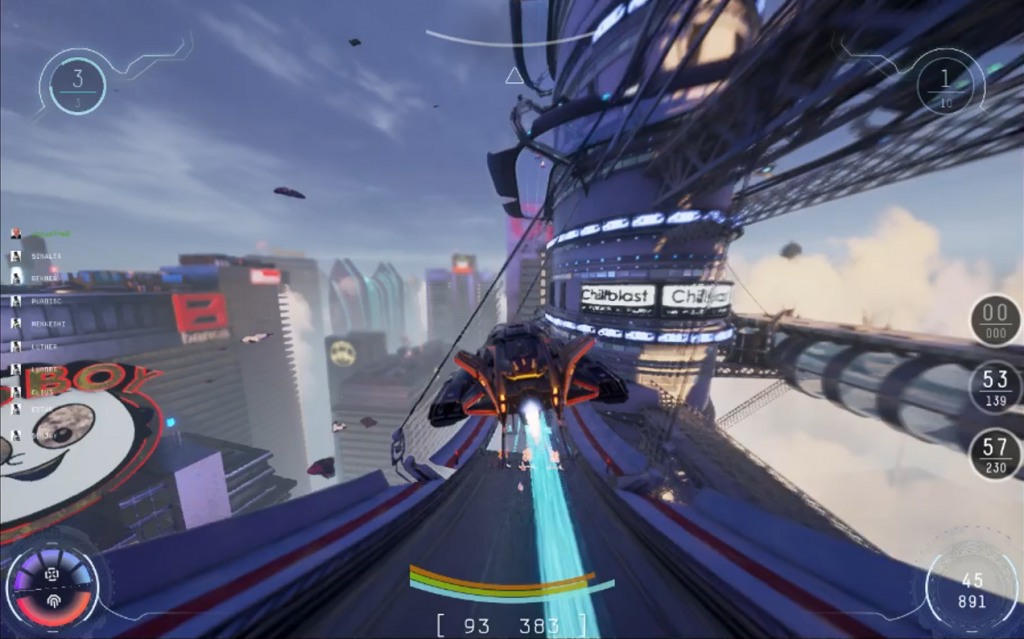 …Meanwhile, it is very important to note that yes, sick jumps are do-able in Formula Fusion.

But, not counting the reverse versions, night versions, and the mysterious “Red Route” that can be glimpsed in Custom mode, the basic tracks are something like half done. The game is pretty, although it currently feels more sedate in terms of the impression of speed (The actual speed is okay), the music is fairly good, the controls are responsive… The only things currently letting it down are that upgrading the craft feels grindy at the present time, and the occasional crash (and I stress, this is occasional.) It has multiplayer (Although, as is often the case for future racing games and other niche-ish genres, finding a game without a bunch of friends who already have it is a matter of luck), it seems to be progressing nicely, and, from what I can gather, it’s been done in a sensible timeline for developing a game like this in the Unreal 4 engine.

Even though it’s not complete, what is there works, and, with the possible exception of the F2000 and Custom Race mode, works well. Props.