Spike Chunsoft, much like their serial antagonist of many faces, Zero, has left me in a bit of a pickle. Thankfully not one involving Running Man style exploding collars, or deathtraps, or locked rooms, but one involving that most dangerous of minefields for a reviewer. SPOILERS. 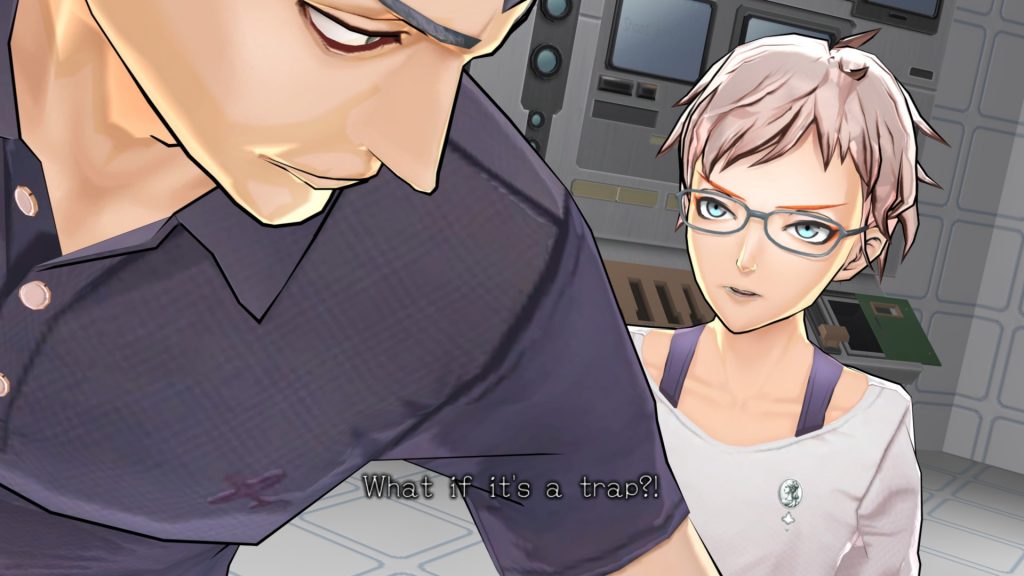 Beyond what I just said, and the fact that I think the game is quite interesting and cool (And that it’s good news that the other two games, 999: Nine Hours, Nine Persons, Nine Doors and Virtue’s Last Reward), you won’t find any. Or maybe you will. It can, in the middle of play, feel as confusing as whether this game is a sequel, a midquel, a threequel, or all of the above… Although I’m moderately sure “None of the above” is not a valid answer, leading only to the Bad End of dubious canon. I’m only going to tell you what you need to know to make a decision.

First up, it’s a voiced, 3D visual novel with puzzles that remind one of earlier games like The 7th Guest and Myst, where skipping dialogue for the first time through is not recommended, and where philosophy, Pop Quantum Physics, and death all reign. There are six billion lives at stake, and this is not a spoiler because you’re told that in the first minute or so of the bloody game. Click on things, move things, escape from rooms, and make choices that will have a momentous effect on the game’s world… Or not. If the Pop Quantum Physics mention didn’t clue you in, not everything is as it appears at first.

And that’s actually the second important thing to note that isn’t a spoiler. The game is, for the most part, non linear. Even in the middle of a puzzle, you can, for the most part, sod off to a different, unlocked part of the story, and the game relies on this for multiple reasons. At first, you will get annoyed at unlocking Bad Ends (Some messier than others), but as the game progresses… As more of the timeline unlocks… Those “Grr”s will soon turn to “Ohhhhhh”s and “Wait, WHA-”s. More of the former than the latter, which is a credit to the writing team. 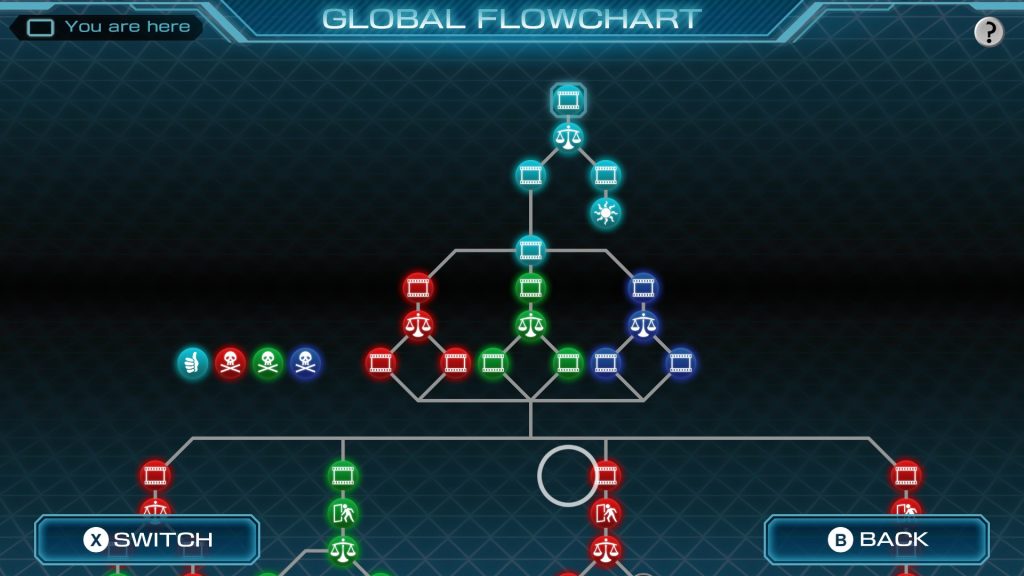 …For example, even this beginning segment says things. 🙁

Similarly, the voice acting team and musicians deserve kudos, because the English dub of this game is not bad at all. The VA in general is well delivered, the music is mostly fitting to its atmosphere and well crafted (The exceptions not actually being the musical and VA teams’ fault, as there is, unfortunately, a currently unpatched bug that sometimes cuts the music out before it’s meant to end, and if you don’t turn the music and SFX down a little, it sometimes overrides the voice acting), and, while the SFX aren’t always that great (About on par, I would say, with the aforementioned FMV adventure games of days gone by, so still alright), the visuals and area design managed to keep my interest for 8 straight hours in a row, helped along by an intriguing story with twists and turns aplenty.

Of course, no game is perfect. There are bugs, but thankfully not many. Some of the dialogue, due to the non-linear nature of the game, will feel repetitive even with the best VA and writing (And, often, the VA and writing dip into “Only fair to good”, with the occasional pun that even makes me groan. I’m not kitten…) Finally, it’s not greatly intuitive how to unlock certain scenes (Suffice to say, the triggers are sometimes spread across more than one scene), and that can lead to some frustration around the midgame. 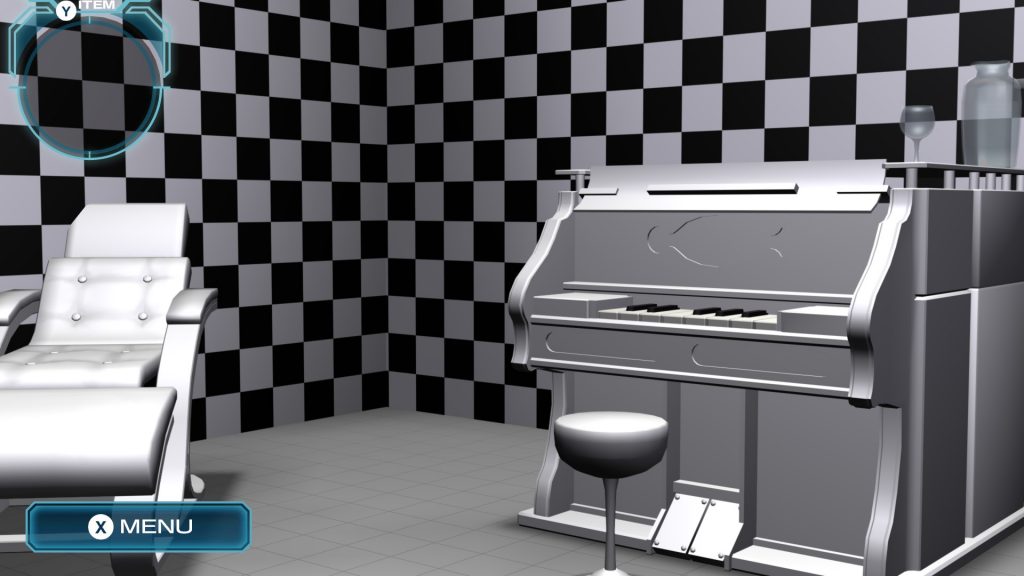 Pictured: Not The Midgame, But Somewhat Eye-Murdering.

But, as far as adventures go, this one is a corker. There is an internal logic, and it can be discerned, but exploration is a must, both through space and time. So long as you understand that, I think adventure fans and VN fans alike may well enjoy Zero Time Dilemma, and, while I wouldn’t call it a great introduction to either genre, if you feel like a challenge, this is well priced.

The Mad Welshman is now going to tell your future. You are going to scroll down from these words… Or up from the previous article in the list, and be injected with Rad-Spoiler-7. Fortunately, Rad-Spoiler-7, while 100% fatal otherwise, is the only known antidote to Irritato-BadEnd , which is 75% fatal. 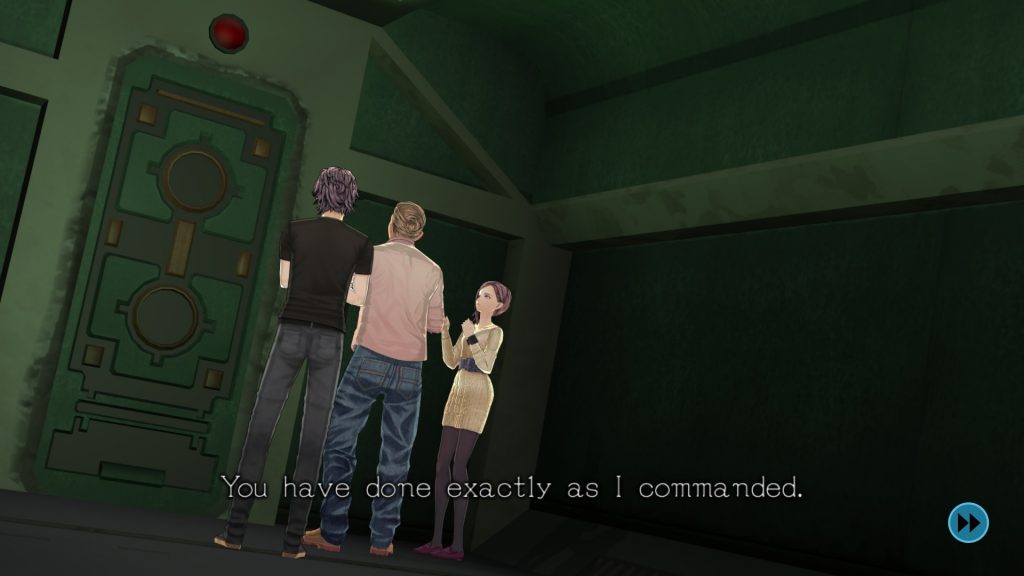 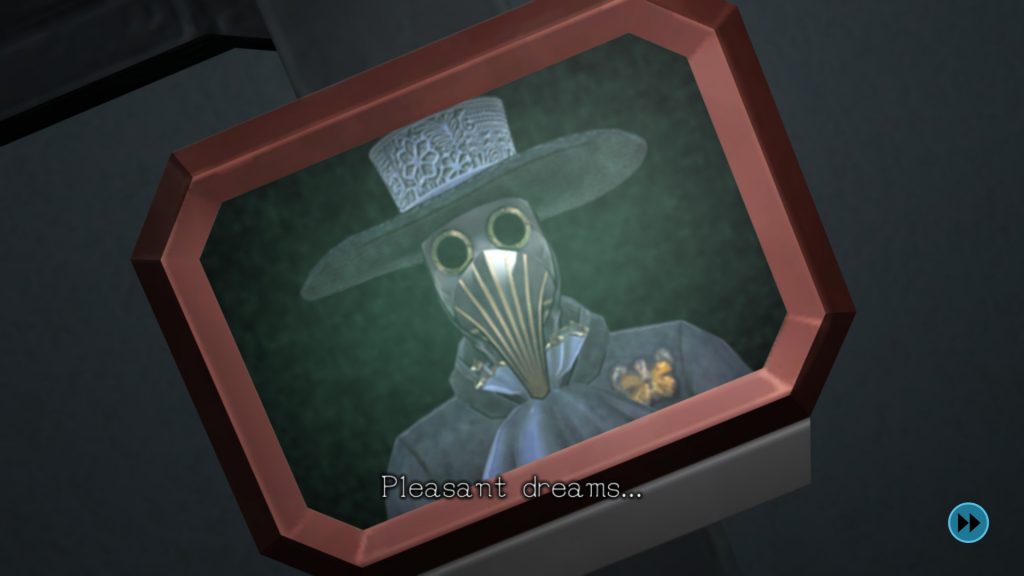