Source: Cashmoneys
Price: £10.99
Where To Get It: Steam , Humble Store
Other Reviews: Early Access 2, Release

Vagante, it seems, is a game that’s rubbing me the wrong way. The title translates as either Rambling, Stray, or Vagrant, and I suspect, considering it involves adventurers travelling in a wagon, the last one. As to what it is? Well, it’s a procedurally generated action platformer with RPG elements. Specifically, Dark Souls. And therein, for me at least, lies the problem. 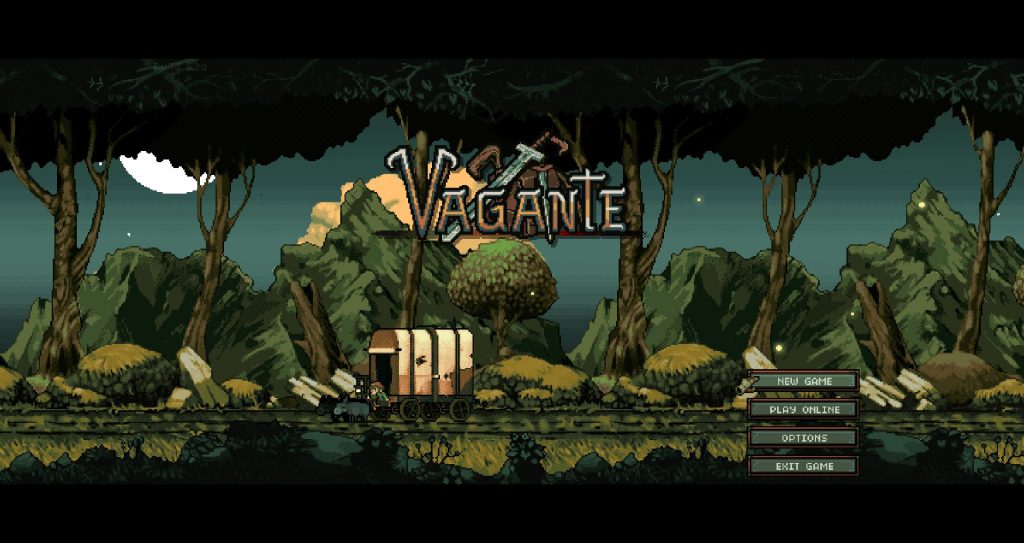 I can almost guarantee you, this is the brightest you’ll ever see the game.

Visually, it reminds me of a darker, harder to navigate Spelunky, a game that, even now, I still go back to every now and again, because it’s quick to play, and easy to get the hang of. Similarly, the music, the squeak of bats, remind me somewhat of that genre classic, and the tile based generation is quite obviously similar… And I forgive what generation imperfections there are right now because it’s in early access, and I’m sure they know about things like some chests being inaccessible unless you have Floor Phasing on floors where an item with that quality hasn’t dropped.

Unfortunately, from there, it feels like it’s hard for the sake of being hard, and the Dark Souls influence is extremely obvious, from the unlockable Deprived option (Where you have no items, weapons, etc…) to the combat depending on understanding patterns and working with weapon speeds, to a boss in every level, to mimic the bosses of areas. Oh, and bats, levelling up, and a “stability” stat that governs how often you get stunned/knocked back.

A lot of which doesn’t matter when you can all too easily bounce off an enemy into instant death spikes just before you realise what’s happened, instantly and prematurely ending a run. Or take enough damage from enemies that you pretty much know you can’t beat the boss of the level… Whether due to being too rash, to the inconsistency of whether dagger strikes will properly murderise a goblin before it can get its weapon animation off, due to falling off things due to sometimes fiddly ledge grabbing, or simply because you’ve misjudged whether that bat really is in line with your weapon, among other things.

This is before we even factor in class elements, like how the fighter’s sword skill adds control complexity and makes it more likely I’m going to be stuck facing the same direction on my next attack when I just want to turn around and smack that sodding Goblin that’s behind m-oh, I’m dead. 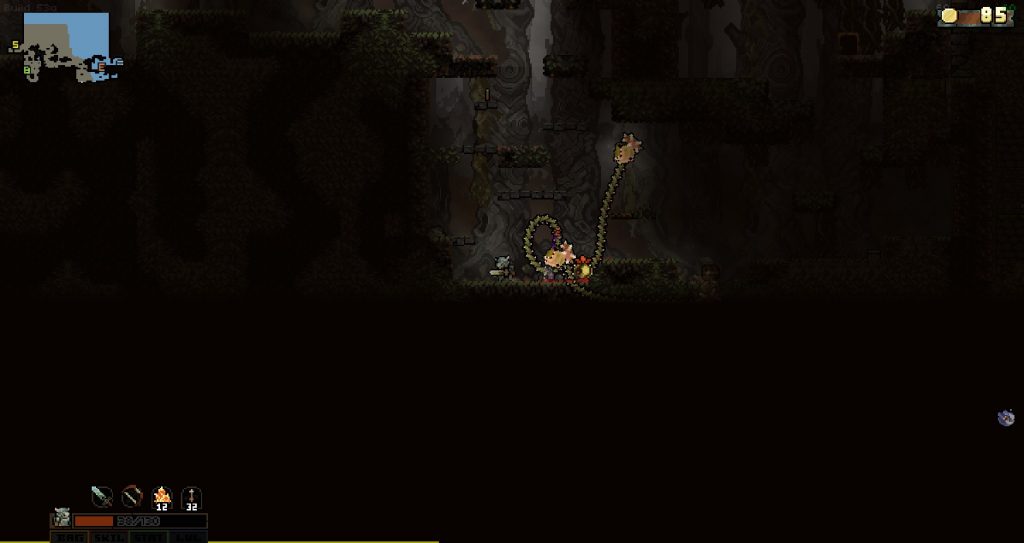 Pictured: Facing the wrong way, in a canned animation, about to get nommed.

Speaking of classes, no class is, thankfully, completely useless, but mileage will definitely vary, even between runs, on the four classes (Warrior, Rogue, Wizard, and the unlockable Wildling, a barbarian type who likes to punch things.) I’ve had the easiest time so far with the Rogue, because I know the hitbox of the dagger, it attacks quickly (Quickly enough that, most of the time, I can kill a goblin before it gets a swing off, unlike the other three), and I have the backup option of the bow (Which does tat for damage, and is slow to fire… But, of course, is ranged, which means you’re not being smacked about.) However, how well I do depends on a number of factors. For example, one of the bosses of the first three levels (And you will encounter all three bosses before moving onto the forest, presumably encountering another three bosses over three levels… I wouldn’t know, I’ve never finished the Forest area.) is a dragon. He does 5 damage, plus burning, every time he hits me with one of the three fireballs he spews as part of his pattern (The most common pattern, by the way.) If he’s in cramped corners, and I’m playing a rogue, I can generally stab him and not die. If I’m the Wizard, I can generally pull an Emperor Palpatine on his arse while dodging fireballs in almost the same time regardless of whether he’s got room to move.

…If I’m the Warrior, I am extremely dependent on either a) Having found a lot of arrows/offensive magic before I meet him, or b) him being nice enough to stay close enough to a platform I can hit him quickly enough that he won’t melt me before I stab him.

I’ve only ever killed the Wood Golem (A Forest boss) with ranged options. And let me tell you, ranged option fights are fucking tedious. Stabbing with a quick weapon? Pli-pli-pli-plink, maybe add another “pli-”, and your average enemy is dead. Takes a second or two. Using a normal weapon? Stab, maybe a second if you’re comfortable, retreat a bit to not get hit, stab, Bob’s yer uncle. A ranged weapon? Draaaaaaaw, fire. Less damage than a dagger swipe. Draaaaaaw fire. Oh wait, now I have to run away so I can do that some more. Heavy weapons, such as hammers, or especially battle axes, have their own little fillip, in that not only is their animation slow and tedious, the hitbox for the attack has a minimum range as well as a maximum. So it’s of fuck all use for fighting enemies next to you. Considering that, in the first three levels, the natural urge of every single enemy is to get right up in your face? Have fun properly judging the timing! The Forest is somewhat more forgiving. There, they’re mostly either trying to eat you or shoot you, and both are more dodgeable. 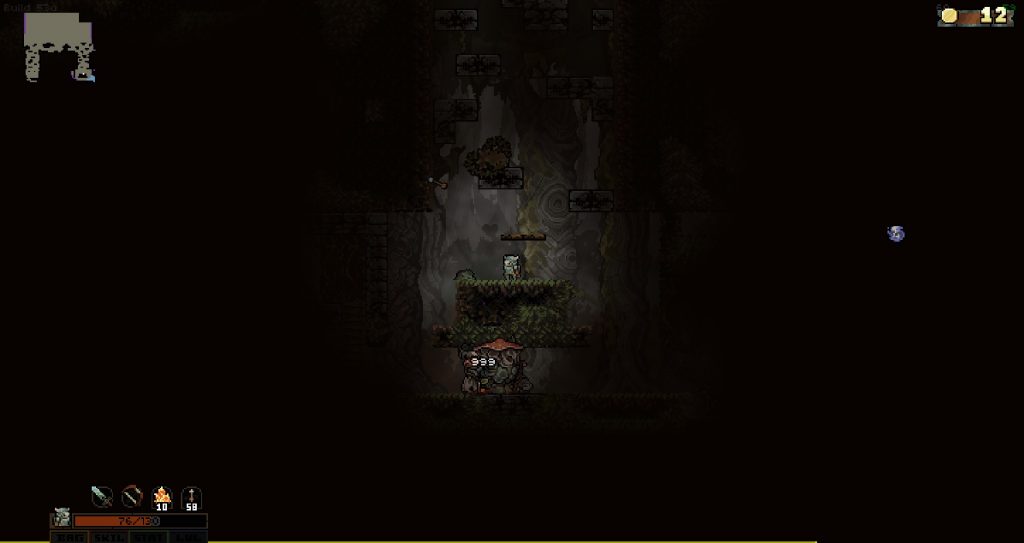 Pictured: Some wooden asshole with more hitpoints and damage than he perhaps deserves.

Meanwhile, I just don’t know how some of these mechanics work. Spells have levels. What raises those levels? Beyond a perk, that is…? Why is it that some goblins seem to have a better ability to get off their attack animation despite me frantically punching/stabbing them like I’m Kenshiro from Fist of the North Star? Is there actually a point to the stat skill trees beyond extra damage with X or slightly more hit points, over, say, the ability to mix unwanted potions into maybe the much more needed Potions of Regeneration (Not a guaranteed thing, but hey, better than maybe an extra point of damage or two) , or one of the many other skills of varying usefulness and added complexity?

I don’t know for sure, but I do know this game frustrates the hell out of me, from its FUCKING BATS (I will nearly always capitalise that, because game developers really need to learn that bats aren’t good. Their only functions in this game, just as in nearly any other I’ve seen them in, is to annoy the hell out of you, make you wait for them to come to an ideal position before you can kill them, and to occasionally knock you into spikes because you were paying attention to something else that might have knocked you into spikes and kill you), to bosses with way more hit points than is sensible (Forest Golem and your almost insta-death slam, almost insta-death rock throw, and fight that mostly consists of praying I don’t run out of ranged options while taking ten times as long to kill as any other boss, I’m looking at you) and inconsistent difficulty based on where they are (Most of the cave bosses qualify here, from “I can’t hit this f-ing dragon” to “I got thrown into spikes I didn’t even know existed by the Boss Goblin.”)

While we’re on the subject, and in summary, I’m sick and tired of “Roguelike” being a byword for “We will kill you with factors outside your control such as boss arenas”, and I’m sick and tired of “Inspired by Dark Souls” inspiring tedious combat that somehow inspires people to respond to genuine complaints about gameplay flow, fuck-you traps and enemies (HELLO, LURKER ON A SINGLE TILE I NEED TO PASS THROUGH), and FUCKING BATS (Themselves with issues when it comes to murdering the stupid squeaky bastards) with “GIT GUD, SCRUB.” 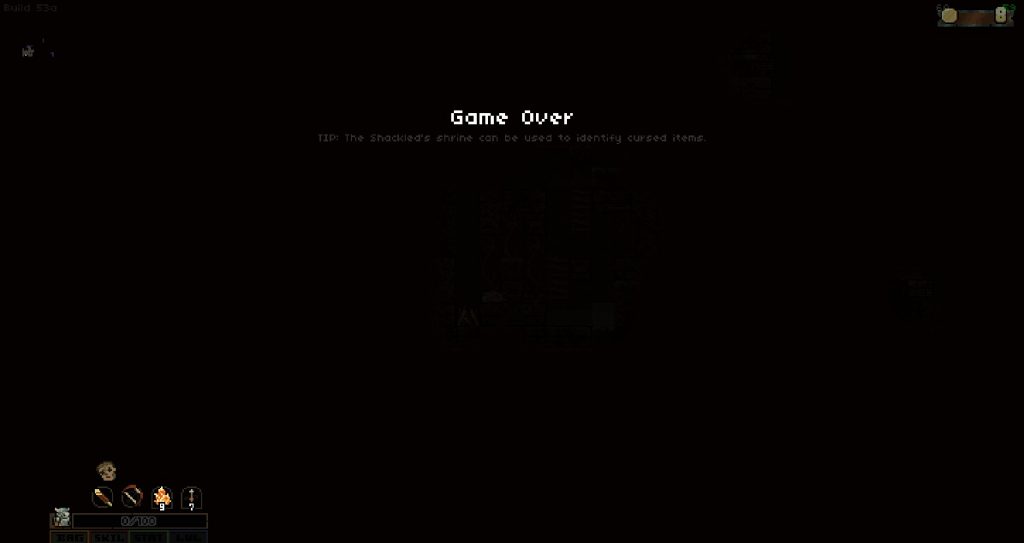 The already dark environment gets even darker when you’re dead, so unfortunately, you’ll have to take my word that a bat knocked my into an instadeath spike because I couldn’t *precisely* hit the squeaking little shit.

Each “run” doesn’t tend to take long (About 10 minutes, on average, to the Forest), but even so, without improvement, I’ve seen the Dark Caves enough that I’m most likely going to be heartily sick of them when I eventually come back for the release review.

The Mad Welshman is dead. Game Over. Oh wait, he respawned as a Console Critic. And then died and is a PC critic again, and then…