The Dresden Files Card Game is an odd duck, to be sure. This isn’t because it’s a bad adaptation of the tabletop game, but because, honestly, the tabletop co-op card game has things that make me go “Hrrm.” So, keep in mind, dear reader, that most of this will be about how it plays, how the cards look, because the UI is fine, the ambient soundtrack is fine in small doses, and, apart from a minor control quirk where you scroll the mouse to zoom into a card, but click on it to zoom it out, it’s perfectly fine as an adaptation. 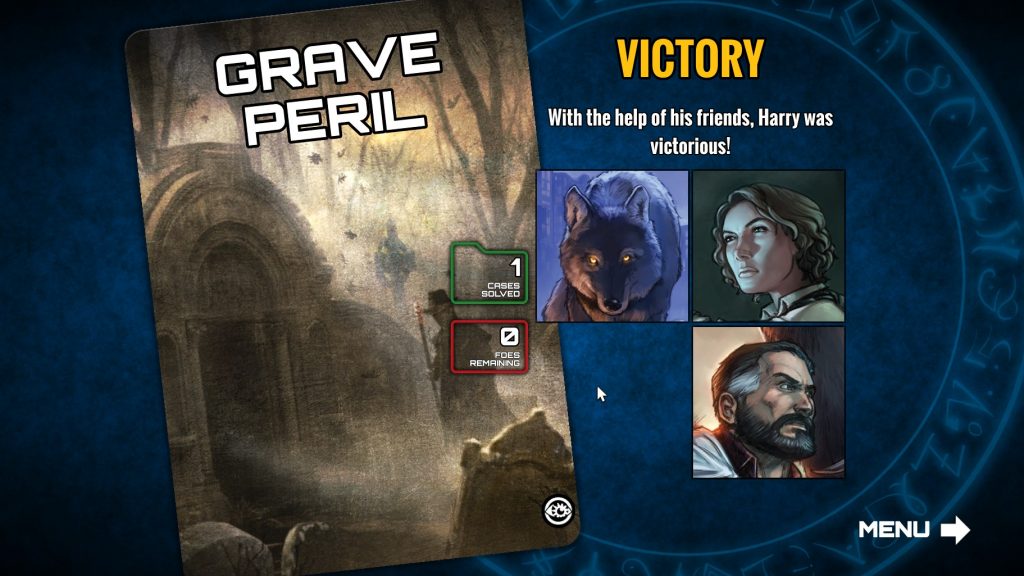 The character art is quite nice, and the book art remains as good as when I first saw it on the books.

Right. The tabletop game. Essentially, it’s meant to recreate the adventures of Harry Dresden, private dick, wizard, and meddler who often gets in way over his head, the creation of talented author Jim Butcher. The base game, much as the tabletop version, has the first five books, and five characters, each with their own small decks and abilities (Obviously, including Harry, and, just as with the tabletop game, 5 more books and 5 more characters are reasonably priced DLC.) The general idea? Solve cases and defeat foes, using a limited hand and tactical planning, to ensure that, by the end phase (or… If you’re lucky, after the end phase) you’ve solved more cases than there are foes remaining. So far, so simple.

The thing is, you have little niggles, and all of them are to do with Fate, or, more accurately… FATE, the tabletop system based on FUDGE, which has FATE Points and FATE Dice as resolution mechanics. In the Dresden Files Card Game, FATE Points are not experience, but a limit on what actions you can take, including passing your turn. You can get FATE Points back with, for example, Chicago cop Karrin Murphy’s Stunt (One use per game) or “selling” cards, and, as such, it’s a very tactical game. Hrm, I could use Harry’s Soul Gaze to clear up that case, but if I do, I’m leaving Karrin in the lurch for finishing off that Foe, getting us some FATE Points, and getting most of the way to clearing a case. Passing will also dick her over, because it costs a FATE Point, so… Discards final card, Harry is now a liability in the final turns. 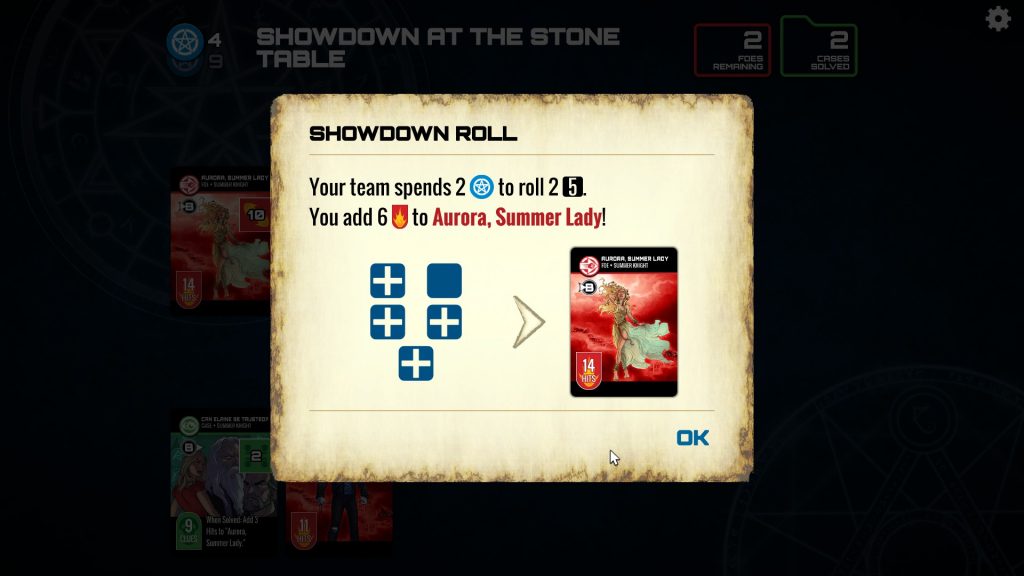 FATE Dice sometimes play a hand in FP cost, attack power, and other shenanigans. This is, hands down, the best Showdown result I’ve ever gotten. A less than 1% chance that won me the game.

Tough choices, obviously, abound. And the game does do a good job, with a fixed card pool for each book and character, of getting across the narrative each represents. Billy and Georgia, for example, are werewolves. But they’re not bad Werewolves, and at least two of their cards can only be used if it doesn’t kill or solve. Meanwhile, Susan Rodriguez is an investigation powerhouse, with mostly weak attacks, but a good chance to take advantage, overcome obstacles, and, in at least one case, get clues for a case from fighting a foe. Meanwhile, each book, even though the card pool is always the same 10 cards, has quirks. Kalshazzak the Toad Demon, from Storm Front, for example, cannot be killed, or even hurt unless you solve the core mystery of the novel. In one book, a hostage situation is an obstacle that has to be dealt with, blocking further investigation or combat.

It’s thusly sort of a shame that some of the card art is… Well, functional. Cases look the same. Combat cards, very often, look the same. Same art for a Soul Gaze as… Consulting Bob. In the Side Jobs mode (a more random, “Here’s some occult stuff and cases that Harry would be dealing with in short stories, fanfics, and part of his world” story), this becomes even more clear, with White Court Vampires, Ghouls, Shadows, and all sorts of beasties represented by… Exactly the same card art. Now, at this point, I want to reiterate that this is a very faithful adapation of the original tabletop game, so this is how it was in the tabletop game too. But it’s still a minor let down. 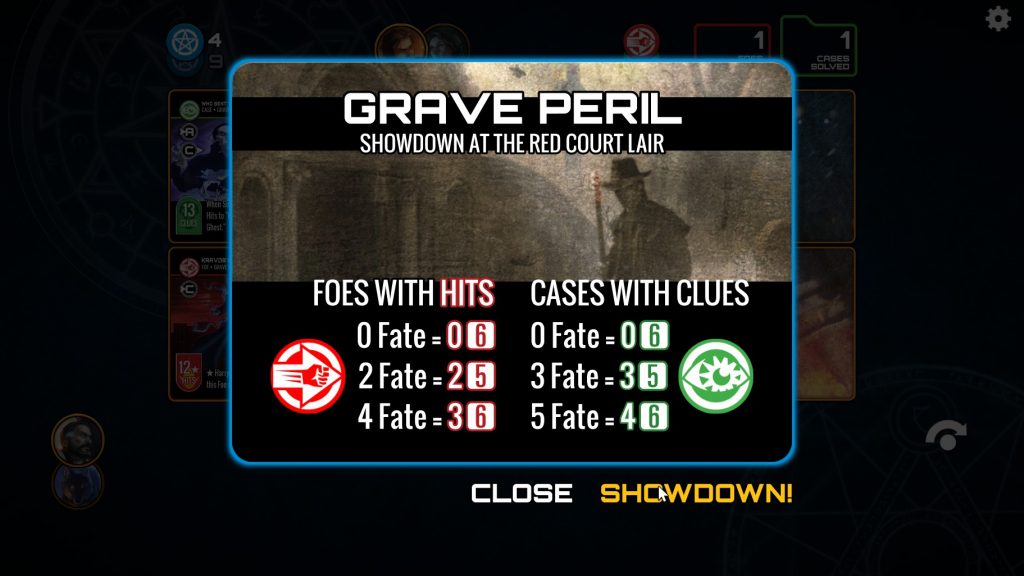 You’re gonna need those case points, as Grave Peril has a lot of TOUGH cases.

Finally, you have… The Showdown. Again, this is a faithful adaptation, and another tactical layer to the game. Do you save FATE Points for the Showdown, leaving some cases or foes for a Hail Mary at the end? Or do you do your best with the cards, and then leave it to the dice with narrow margins?

Neither, as it turns out, are great. Having lots of FATE Points is nominally better, with a roughly 11% chance of getting nothing out of a case… But that chance does exist, and if you need more than, say, the 3 points you buy with 3-5 FATE Points (Depends on whether it’s a clue or a foe) , you’d better hope that margin is 2 or smaller, because even 2 points above is a 23% chance of success. And Lady Luck, as many have found to their cost, has no memory. Also to be factored in is that you have to have at least some hits on a case or foe to try, and an impossible roll is… Well, still impossible. You will never get more than 9 points in the Showdown, and that’s such a vanishingly small chance that it’s really not worth it.

Is it part of that Dresden Files mood to have the final Showdown be partly based on luck? Hell yes. But equally, do I have to like that? Hell no.

In the end, it’s an interesting adaptation of an interesting game, albeit one with its flaws, it has a good tutorial, and it has hotseat for those of us who do play hotseat, meaning that yes, you can buy it to play on your tod (Thank you. No, really, thank you.) On the other, it’s definitely intended to be played with friends, and this shows in even elements of the interface (You can’t, even in Solitaire mode, just switch between characters in the planning stage to see their hands. You have to click on them, then on the hand, then scroll through it. Not much extra effort, but it’s not 100% clear.) This would be fine, except… Well, everybody’s got to have a copy of the game, and the base game is £15. Which is fine… If you are also intending to play it on your own. Which isn’t recommended for long stretches, as the sameyness, and the quirks baked into the game itself, can annoy after long periods. 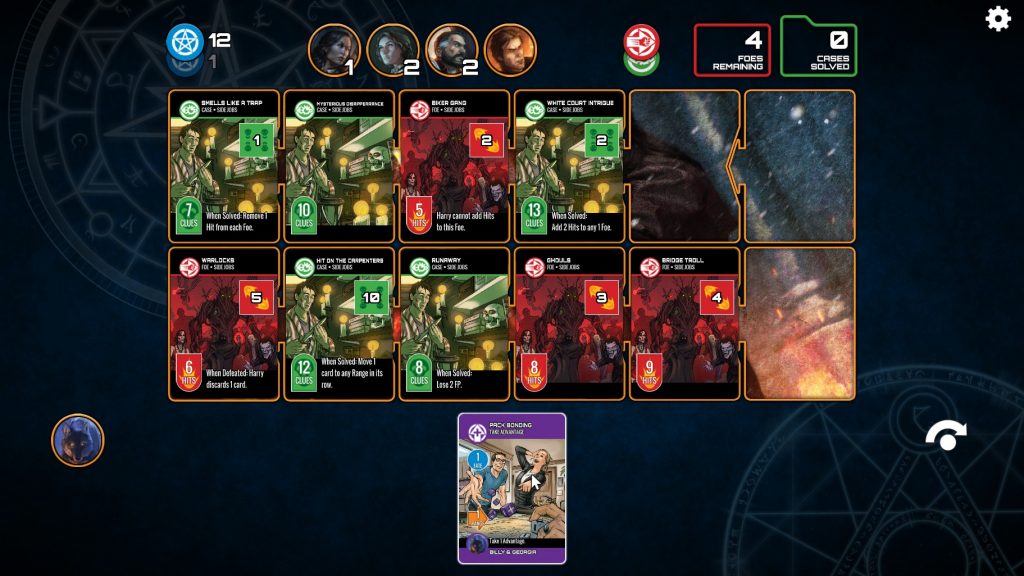 I’m… Not sure what Biker Gangs exist that look like this, honestly…

The Mad Welshman met Lady Luck for the fifth time at a bus stop. As before, she completely failed to recognise him.