Sometimes, you have games seemingly designed to encourage us never to leave this green earth again. Games which say “Space is so stupidly dangerous, there is literally no point in going up there.” Tharsis is one such game… And I don’t really think that’s so much intention as theorycrafting over testing. 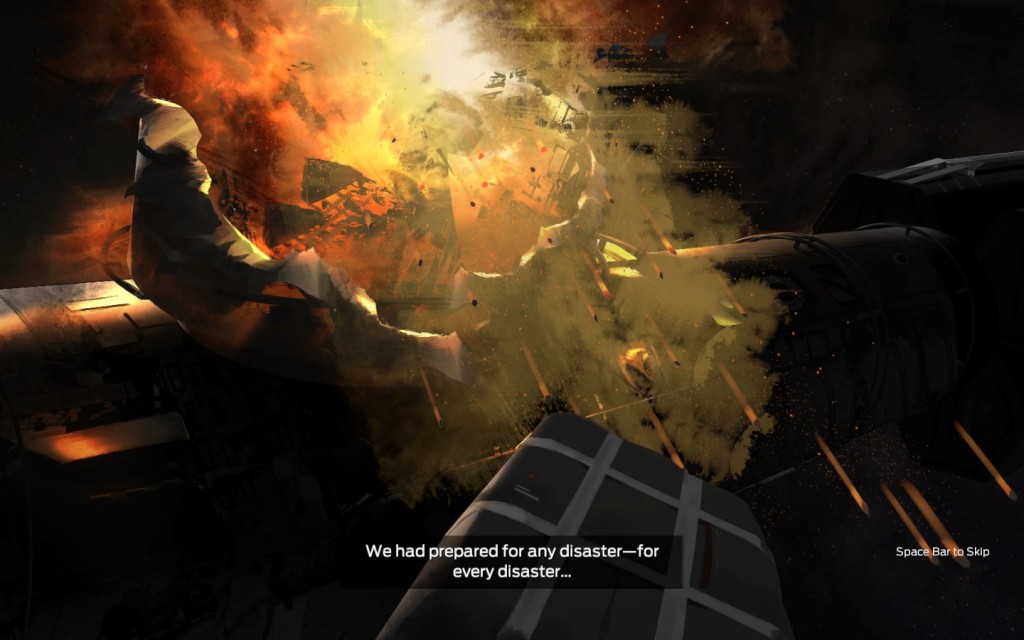 Make no mistake, Tharsis is beautiful. Digital paintings abound, the Tharsis itself doesn’t look bad by any stretch of the imagination, and the UI, while not as helpful as it could be, is laid out well. The music, similarly, hits the right note, with the cutscene music’s mood of “We are fucked” and the main game’s “Okay, but let’s go down working, eh?” It fits. Which makes the game’s core problem of… Er… The core all the more heartbreaking. Essentially, while on a mission to Mars to investigate a transmission, a micrometeoroid shower blows up one of your modules, setting off a cascade of problems, and killing two of your crew, leaving you four crew, and… Well, an ever growing list of potentially lethal problems on your mission. And that, right there, is both the thematic core of the game, and its core problem.

Simply put, there is never, ever enough work to go round. I wouldn’t mind it so much if it were a case of “Welp, I missed saving the ship by one die roll, I can do better next time!”, but it never is. It’s nearly always around 4 weeks in, with an absolute mess of sudden, critical, and life threatening problems. On “Normal” difficulty. And it seems to show how little thought went into the interaction between game elements that I cannot find a single way to get myself through this block. If I somehow had seven dice (out of a maximum of six), and managed to roll every single number on those dice once (Plus a 5) and got the right piece of research, I would be able to manage one out of five critical problems that arise. But this is also assuming, firstly, that I had seven out of six dice (An impossibility), secondly, that none of those six results were Void (Removes dice), Injury (Removes a health level from a crew member), or Stasis (Locks the number rolled), and, last but not least… It would be assuming it’s only one 20 odd dice problem, instead of… Er… Up to four. 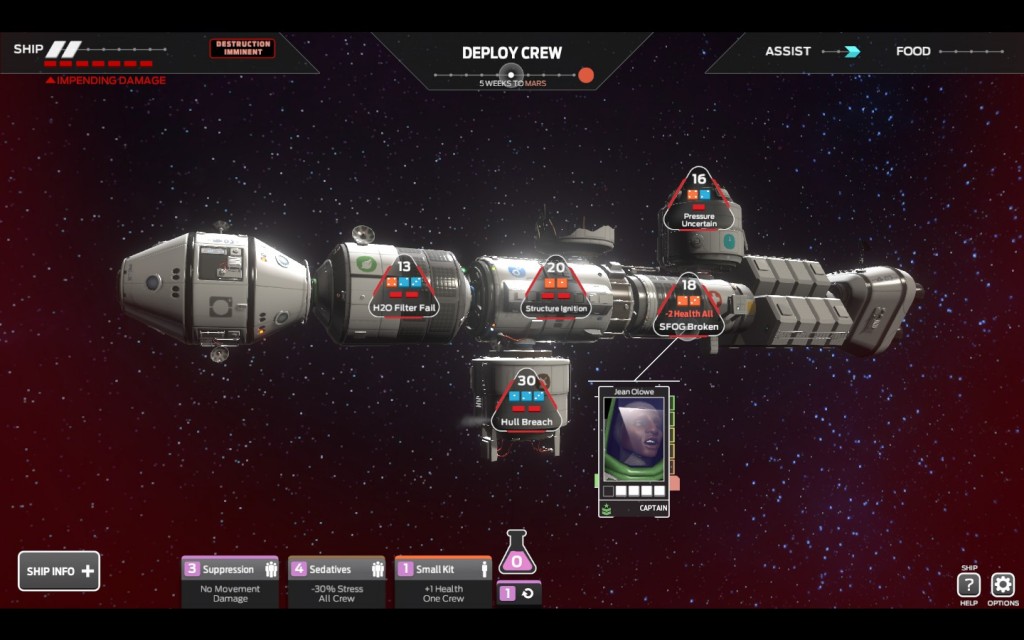 Sometimes, your end is as ignominious as this. Others, it’s at least mercifully quick.

There are things that can sort of help, but they require dice to use, and usually specific numbers. Want some food to give one of your crew more dice next turn? This requires firstly, that nothing else life threatening is distracting you (Good luck with that), and secondly, that you get… Er… At least two dice with the same number. Assuming, of course, that you have two spare dice to go around. There’s more, of course, but it all comes back to the same core problem: You simply do not have enough dice to even attempt anything but prayer. In a sense, this is fitting with the mood the game is trying to portray. You will not win this game through strategy, because the dice are the true arbiter of whether you survive a turn. On the one hand, it’s relatively quick. On the other, once you’ve won it once, there’s really not much incentive to come back, as the story, and the ship remain the same. All that changes is the crew (Four members, with most choices being unlockable through… Well, grind, basically. Did you research 800 things? Have a crew member choice!) the specific set of disasters you’re going to go through (Which come in flavours of “Will blow up bits of the ship”, “Will turn off those features you rarely use because you’re too busy stopping the ship from blowing up”, “Will take away food”, and “Will take away dice”), and the side projects, combination heal and harm decisions that might give you that edge you need… But it’s generally doubtful, and as the stress mounts, the decisions get worse, and the chance of fuckups costing heavily increases. Oh, just for reference, stress is the bar on the left of the character’s portrait. Research falls to the same problem: You do not have the dice to spare, most of the time.

Do I think it’s well designed in terms of trying to recreate a mood? Yes. Do I think anyone except the masochistic or those who explore thematic design principles will enjoy it? Jesus wept, no. Do I think it could be rebalanced to be less sadistic to appeal to a broader audience? Yes. Right now, however, it just isn’t that approachable. There’s a lot of potential clarity work to go in, there’s grind for questionable results, and this is basically a game about managing luck. Skill will usually get you 4-6 weeks in, but you’re going to need 10, and for that? RNJesus is your only real recourse. For the price it’s asking… I’m not really sure this would appeal very broadly. 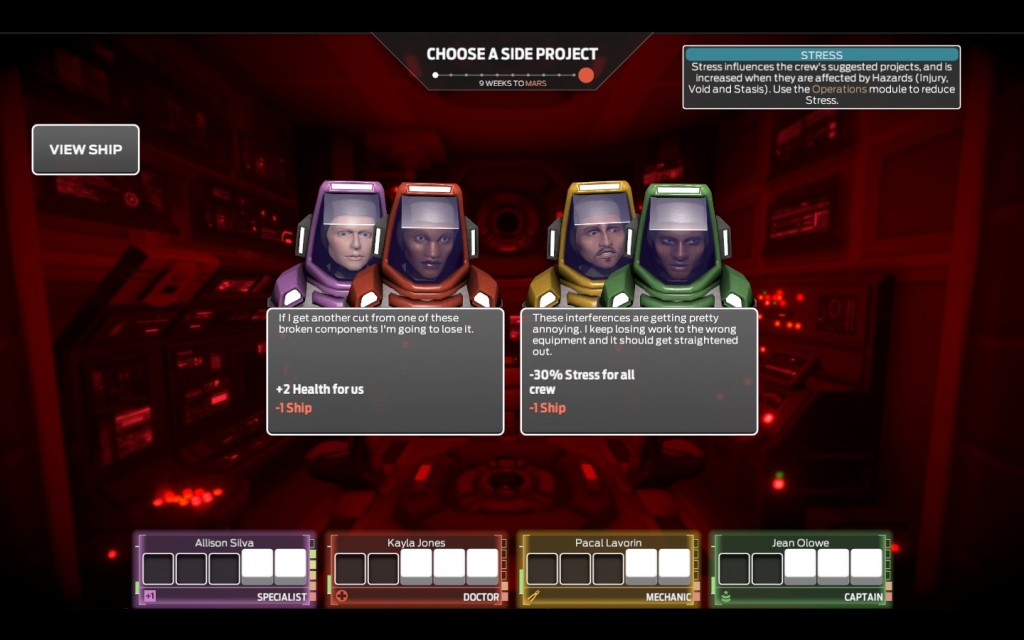 The Mad Welshman groaned as yet another monitor sparked in an alarming way. He was six weeks from retirement, dammit, this was meant to be an easy mission, and he couldn’t even get the satisfaction of recreating that one scene from Dark Star at the rate things were going!