Ah, Jackbox, purveyors of party games that you can play anywhere… Y’know, so long as you have something that can connect to the internet, and at least one person who owns the game. Who’s streaming. And here is where a score-based review of Quiplash would fall down, because it would really have to have two separate pretty numbers: One for the game client itself (£6.99), and one for the actual player experience (jackbox.tv, price: Fuck all, but you will never host the game, nor will you be able to play without a room code.) One of these scores would, to many, be a fair bit lower. 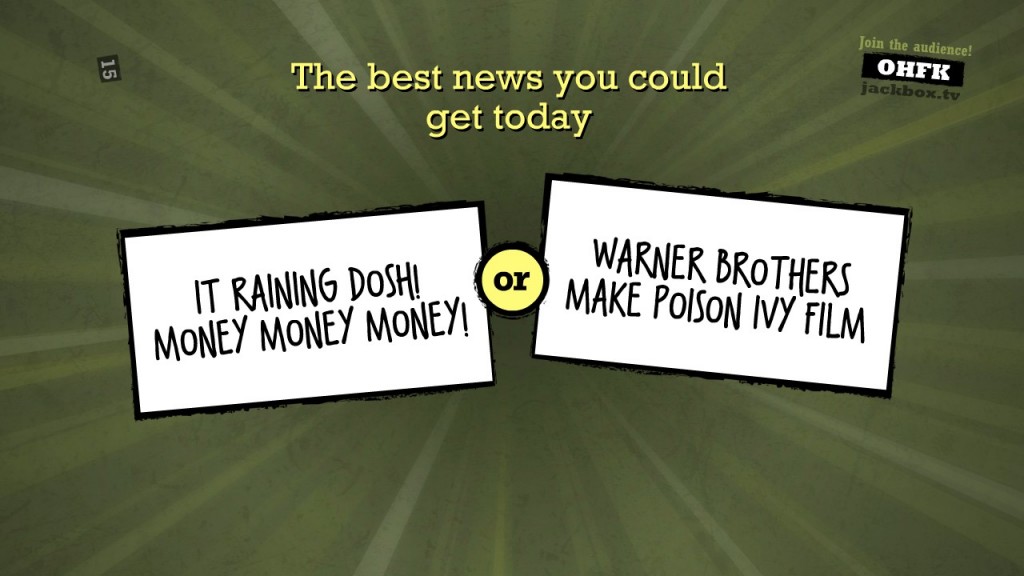 Sometimes you get cool things, and your friends smile.

But not to me. You see, the client, in its way, is equally as hamfisted as the jackbox.tv, player input end. As a host, I get to see all sorts of pretty pictures, hear pretty voices and noises, and, if I’m feeling generous, stream them to the less fortunate players (And audience.) Without that last one, none of the players will ever know how well they did, because the player side client won’t tell you. On the other hand, I can’t do a damn thing through the client (like join the game I created), having to rely on the simple, almost HTML form-ish nature of the jackbox site to do things, rather than all these pretty visuals.

Put them together, along with some mates, a voice chat, and the ability to show all the other players what the hell is going on, however, and all of a sudden, the magic happens. Through brute-force and the magic of socialising, the bits of interface come together, and the result is laughter, groans, all the noises that you associate with people playing and enjoying a party game. The rules are pretty simple. Three rounds, 2 questions each to answer in 2 of them, as many questions as there are players in the first two rounds to vote on, and the third round is a single free-for-all question. Twice the points in round 2, three times the points in round 3, and if your suggestion is the only one to get all player or audience votes in a question (and wins), that’s a QUIPLASH, worth bonus points, oww! Oh, yeah… The game is pretty much built for streaming, or a packed party, because the audience actually matters, and anyone with the room code can vote, even if they can’t play. 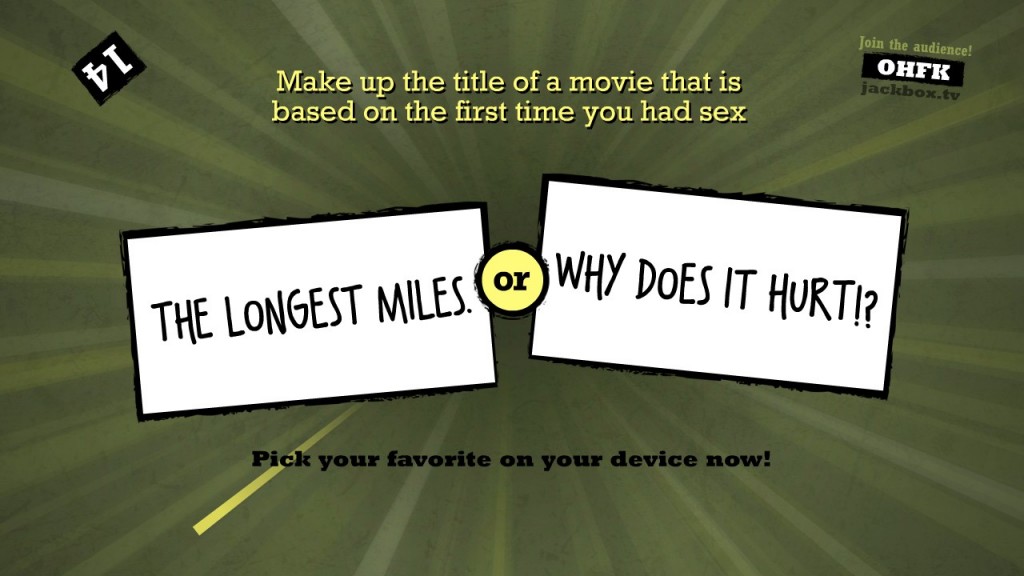 People have likened it to Cards Against Humanity, but with improv, and… That kinda works. I’ve seen some terrible suggestions (Armenian Genocide as a sound that weirdly makes someone sleep better), and some beautiful ones (The Artist Formerly Known As Prince as a Crackerjack box prize. Step right up, one in every box!) I’ve seen injustices (Forget-Me-Not was a terrible name for a Goldfish, and, on reflection, worse than Edward Cullen… It’s just we all hate Twilight more) and deserved victories (“If anyone says CUMquat is a better name for Kumquat, they lose” was, considering how filthy minded the group was, an excellent choice)… But one thing cannot be denied. All of us had fun. We agreed it would be cool to do this again. And all of us playing agreed it was good, despite having to stream the client window somehow.

So yeah, this game is good. It looks like it’ll last a while. But be aware, if you buy it, that you’ll need friends. That you’ll need some way of showing the client window to the other players, and talking to them. Otherwise, all I can really say is: The voting system rewards playing to a crowd, and if you play well with others, folks, then you’ll have fun. Let yourself go a bit, and have a laugh with it.

The Mad Welshman learned many things from this game. For example, people claim that Bears are a good substitute for toilet paper. Truly, the world is a strange place.