Some games, you play for hours and hours, wondering why there’s that strange light outside that keeps coming and going. Some, you play in brief stints. Others… Well, others are like Tiny Bird Garden, in that you’re periodically checking in on your home for cute borbs, playing the odd game, filling out your garden, setting out seed, checking in on a wee chick…

…Oddly enough, that makes it a little hard to review, because it’s a game that you play in short segments (About three or four times a day, if you’re trying to raise a chick), but completion will take months. And some of those times are nice and relaxing (Getting nice letters from the sentient, oh-so-cute borbfolk, complimenting you and your garden), and some… Some feel a bit frustrating. At first, anyway.

For example, raising chicks. While it’s a side endeavour, its Tamagotchi like nature (MUST EAT. MUST SLEEP. CLEAN MY BIRDYPOOS!) could lead the genre weary to feel this is an obstacle to completion. Thankfully, it is not, to my knowledge, possible to screw this up, because, let’s face it, you would probably feel as bad as I would if my cute tiny birb died on me.

The other side content is minigames (Two of which, Stacking Birds and Bird Jump) appear to only give cosmetic items, and a story mode, about… Well, the staff of the Tiny Bird Garden, and the possibility that they might end up selling it off. It was nice that the Borbjewelled game led, after a little while, to enough bird toys in the shape of bird shaped trophies to get me seriously started.

In the end, though, while I find some aspects more fun than others, I only have two complaints and a bug to report. The complaints are both to do with the visuals, specifically, wanting a somewhat better windowed mode, and that the hearts on the Birb status screen (Where you get to see how much they love you, what toys/treats/hats they love the most, etcetera) is hard to distinguish due to a lack of colour/value disparity. The bug, meanwhile, isn’t game breaking, but it is slightly annoying: My flower in Tiny Bird Jump is now on the right side of the playing field rather than the centre, and, while this doesn’t significantly impact it, it is obviously unintended.

Beyond that, the birds are cute as heck (With some good descriptions), the game is tight, easy to understand, and you’re under much less pressure than at first appears to be the case. Enjoy the garden. Enjoy the light, kindly story. And take your time getting to know those Tiny Birds. 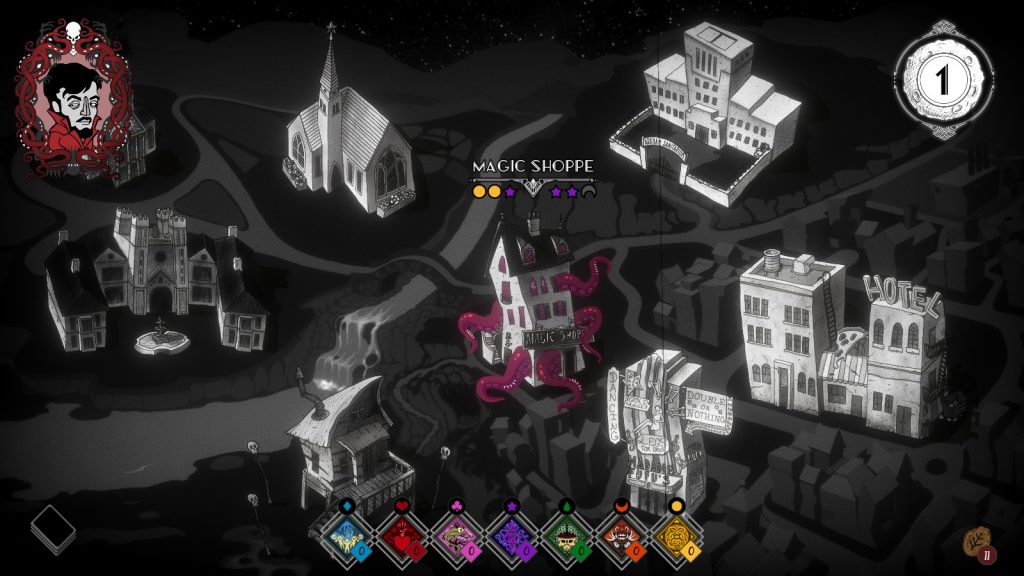 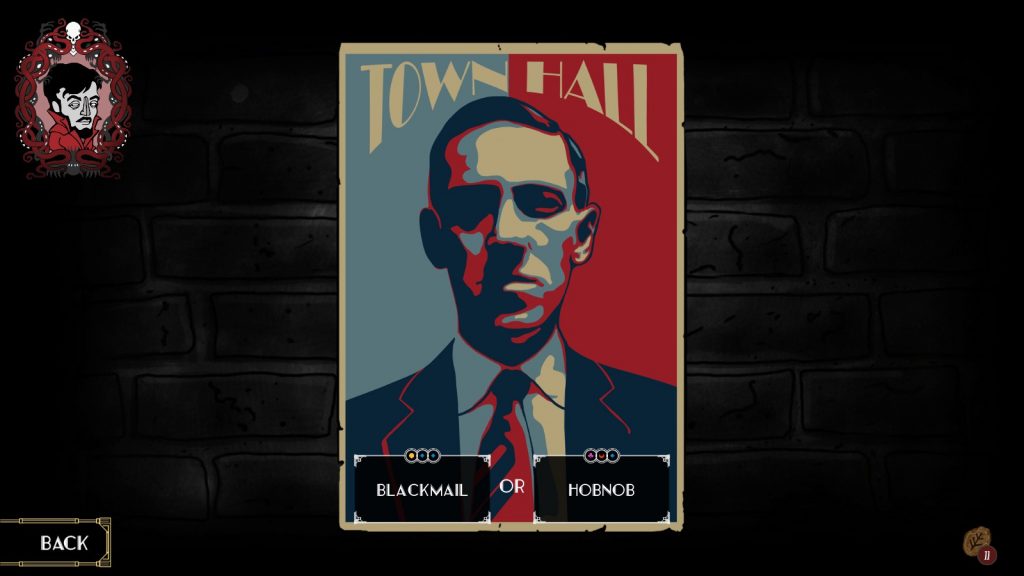 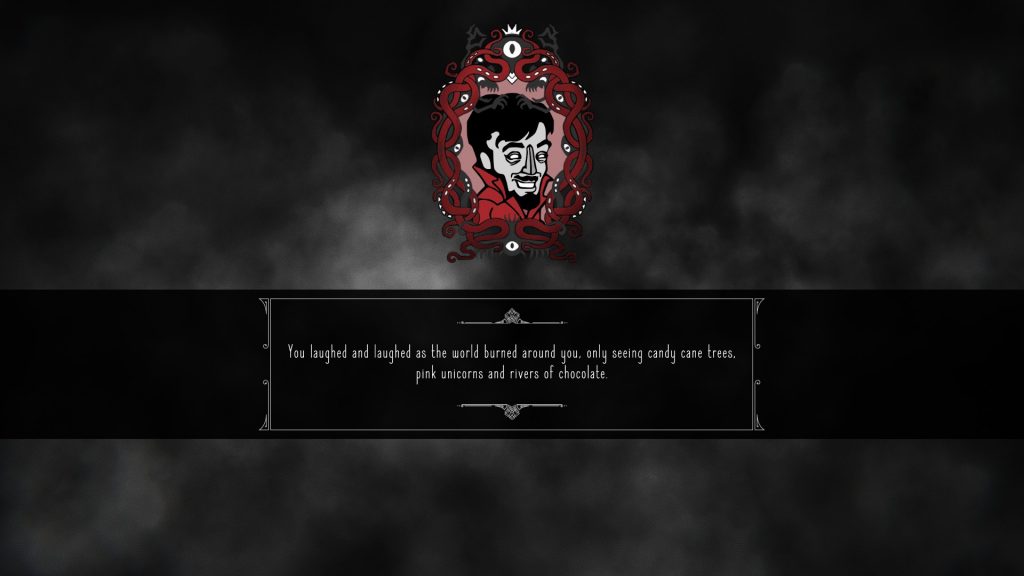 Austen Translation is an interestingly simple game: Spend four turns (plus some secret events) to try and get your stats (Wit, Ruthlessness, and Charm) close enough that your prospective hubby to be proposes to you, while sabotaging anyone else who might be after your beau (or… Well, just sabotage people so you’re the best match.) That is, beyond some twists and minigames, the whole thing, mechanically. Five players, local play only as far as I can tell, with randomly generated AI players if you don’t feel like filling the roster, and character generation with randomised stats, but you get to customise your lady’s looks. 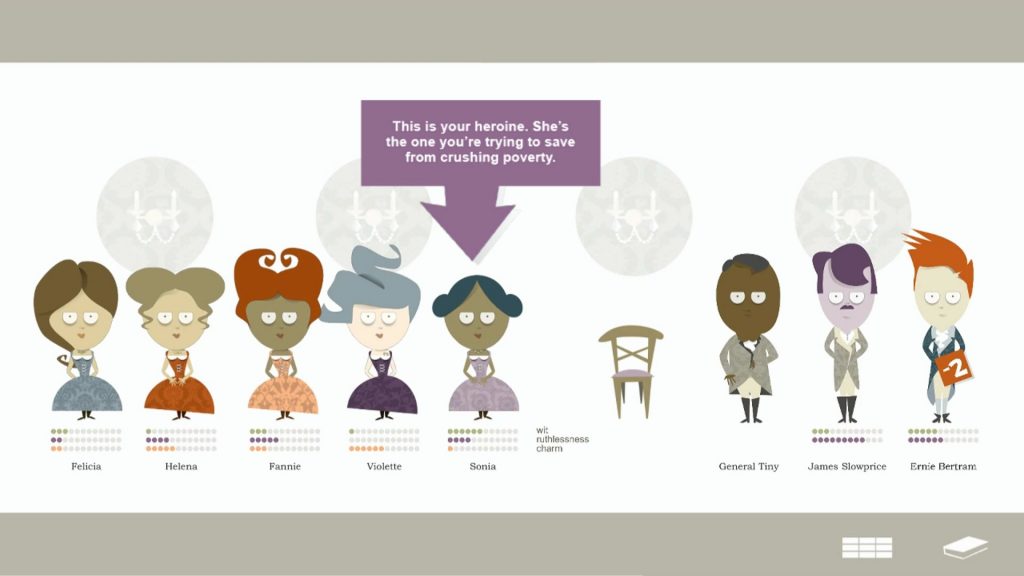 Normally, this would get a “What it says on the tin”, some words about how, once again, Worthing & Moncrieff have nailed a clear, simple aesthetic with a good voice-actress for the round intros (Love the scandalised disgust in her voice when she asks “Did you really just interrupt me?” for clicking through an intro too fast), classical music fitting the theme of the piece…

…But I’ll freely admit, the narrative of the game doesn’t sit terribly well with me. See, Jane Austen was pretty good at critiquing the mores of the time, such as asking that dread question “Why can’t we marry for love, not money or standing?” in Pride and Prejudice… And Austen Translation, by parodying Austen, is almost as if Austen were playing it straight.

It’s pretty clear everyone’s competing, it’s definitely about the fat-stacks of cash the hubbies have, the losers “die in a rat-infested hovel” , and not even the odd winky asides and pleasant classical piano can really distract me from how uncomfortable it made me feel. It’s not played as being romantic, and from the outset, it’s made clear the women are going to be the dominant partners, but I still felt distinctly odd playing a narrative I’d kind of hoped we’d escaped a while back. 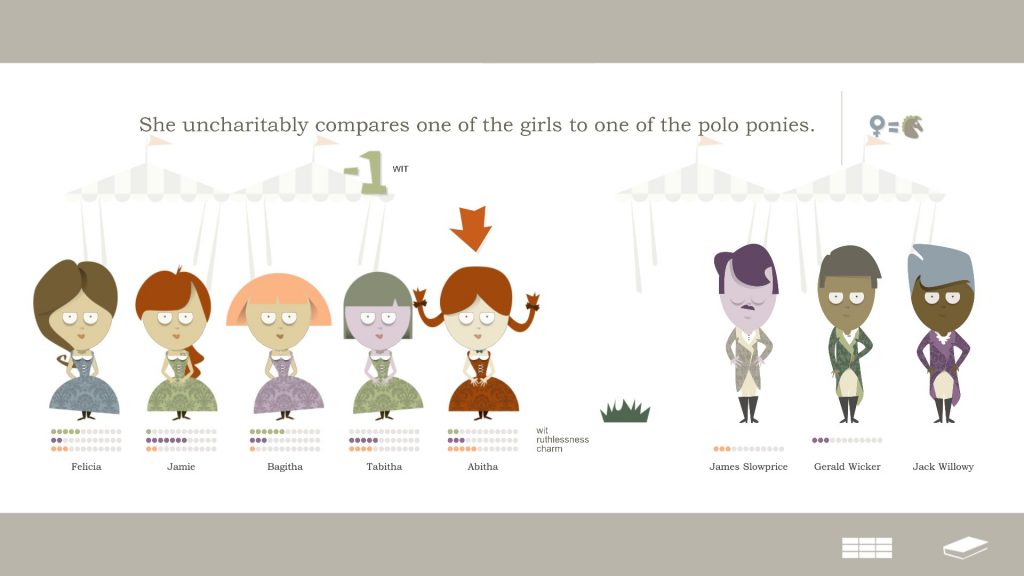 So, while I can’t personally recommend this, I will say again that it’s easy to pick up, tutorialises well, and has a good aesthetic going for it, with the minor niggle that maybe, just maybe, Wit and Charm could be different colours, or at least one could be made darker than the other so as to better differentiate them? It’s perhaps an interesting party game, albeit one with a narrative that, as noted, didn’t sit well with me. 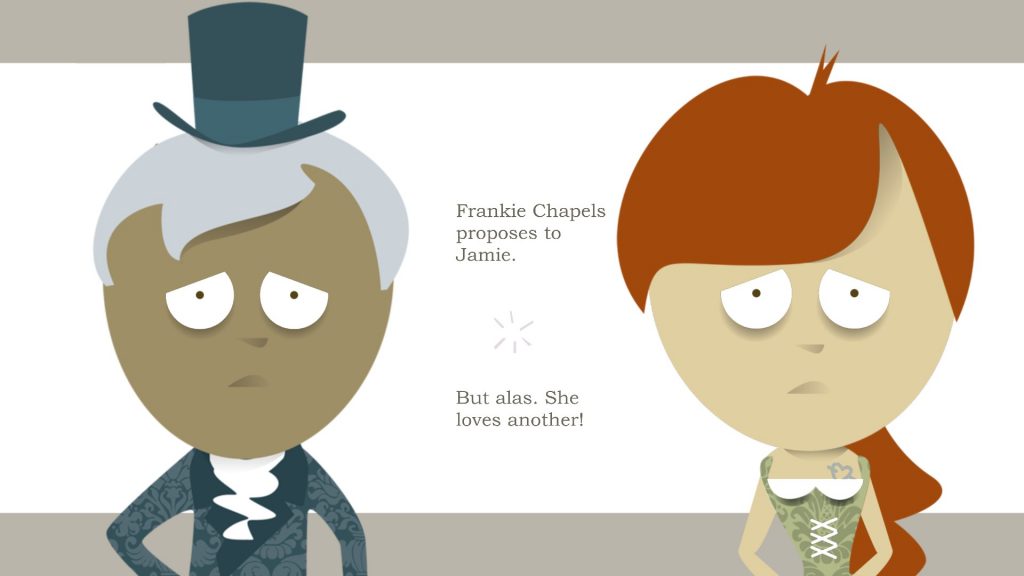 I’m sorry, but I cannot accept, for my heart belongs to a man with six-degrees of freedom…

The Mad Welshman politely sipped his tea, wallet empty, and thought to himself “Thank goodness I’m a babbage-card critic, and don’t have to get embroiled in such things…”