“I don’t get it”, I said as I stared at the screenshots. “What does this have to do with gaming, per se? It looks like it’s inspired by Jet Set Radio Future, but doesn’t have any visible rollerblades or anything.” HOVER: Revolt of Gamers is, it must be said, a game with a somewhat confusing title. And it doesn’t help that there’s a fair amount you have to do before anything more is mentioned beyond “The Great Admin have banned fun” , which, also, seems like a very silly thing to try and ban. I have fun walking, for example, and singing, and, of course, there are many co-operative activities that are fun, at least some of which fall under the umbrella of “Necessary Procreation.” 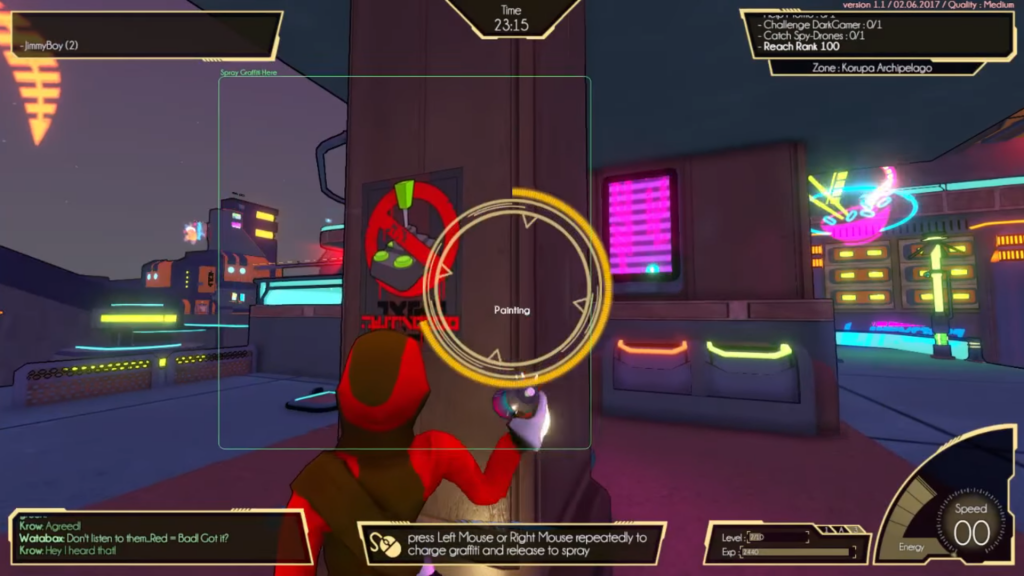 Yes, this most certainly looks like fun. I am feeling the rebellion.

“Jamie, stop worrying about the damn story. It’s not important! I want to know how it plays!”

Oh. Not so hot. I mean, the basics work alright, but when those basics get into the wild, it gets a little frustrating. The controls are, for the most part, pretty simple, even if non-french folk might want to be warned to check the control options, otherwise they’re using ZQSD for walking (AZERTY Keyboard is the default.) Jumping things are done with space, sneaky slidey grindy things are done with shift, and throwy scanny talky things are done with the left mouse button. Bam. The problem then arises when turning the mouse is how you turn, and A and D (on a UK keyboard, anyway) are more sort of… Tilts.

Air control, and indeed run control, then sort of depend on your mouse sensitivity being high, which doesn’t interact too well with, say, looking around, or if you get motion sick. Then again, the way the player created protagonists bounce around, I probably couldn’t recommend this to anyone with motion sickness anyway, especially with all the boost pads and bounce pads and grabbing onto things that maybe should not be grabbed onto. One example I noted while playing in the first area was clothes lines. Okay, I can sort of see you grinding on clothes lines… Sort of… But they are, last I checked, not reliable mantling points, per se. So in a sense, they get in the way of a clean line, which is, of course, the best way to do any sort of mission involving speed. Which many of the missions are, and indeed, keeping your speed high is the only way to destroy holosigns, which is a thing you have to do. 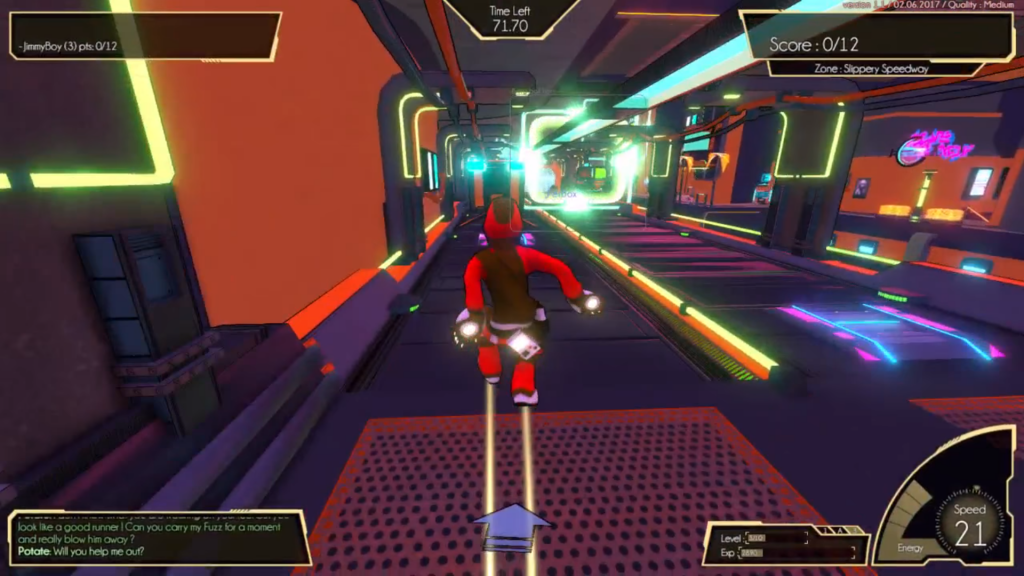 A pet. On a magrail. That I’m meant to take for a walk. On the magrail. Guess who missed the pet, then had to retry the mission three or four times?

It doesn’t exactly help that the cluttered landscape of the hub, combined with a somewhat odd UX design, means you don’t always know where you’re going or what the hell you’re doing. I’ve failed delivery and Fuzz-running missions (Themselves a bit silly, because at least one involves giving someone’s pet a good walkies… On a magnetic tramway) simply because I didn’t notice where the damn item to pick up was due to the confusion. There’s a lot of bright colours, and they often conflict, so poor colourblind me was often acutely lost, even with the Crazy Taxi style arrow that tells you whether something you need to do is in front of, behind, to one side, or up or down, and takes its context from whatever you seem to be doing at the present time (be that capturing spy drones that just seem to be minding their own business, graffiti spraying over the seemingly rare Admin Propaganda posters, or some other things), or racing. This lack of clarity sometimes extends to missions, as friends and I had an interesting time trying to work out what the criteria for the “Do 20 tricks in under a minute and a half” mission was. It seems to be trick combos of more than 75 points, so I filled it out by jumping in different directions, bouncing off the ground with my neon moon boots, and holding the trick key in combination with various directions to pull off tricks, ala Tony Hawks or any other tricking game I’ve encountered.

That tricking mission ranked me up by 5, the highest I’d seen. Shame I had to hit 100 ranks total to get more story, and in less than an hour, I’d started to have trouble finding things to do that weren’t fuzz missions… At least some of which have gruelling time standards, as do most of the requirements for the medals. “8 seconds for gold on mantling several rooftops to deliver a ball” sounds easy until you realise each mantle’s about a second, and each throw’s about a second, so it’s basically “Don’t fuck up at all.” My first, blind time was 19s. No, there isn’t adjustable difficulty, why would you want adjustable difficulty? Don’t answer that, we both probably know if the question even has to be asked. 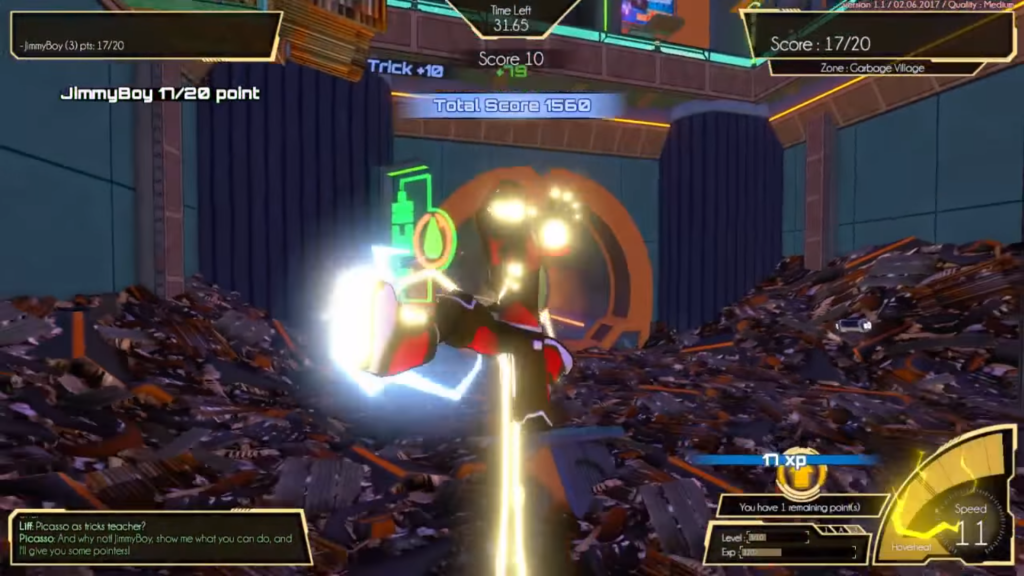 Tricking in trash… I’m sure there’s a metaphor in there somewhere. *Shrugs*

That isn’t to say that there isn’t good in the game, for, while the hub is extremely cluttered, I can’t really say it’s not pretty or aesthetically consistent. It is, in an anime-cyberpunk sort of way, and the character designs, similarly, are mostly kinda cool. The music is definitely a strong point, as Hideki Nakagama (yes, JSRF composer Hideki Nakagama) and Cédric Menendez bring some damn find beats. But the problem is that this is just two parts. The UX is cluttered, at least some of the missions amount to “Do it perfectly or fail”, even in the first part of the story, the missions lack variety, and the story is… Well, silly even for a videogame.

The Mad Welshman no Great Admin, out to ban fun (At least partly because such a thing would be extremely hard to enforce), but he sadly can’t recommend this game.